“An Uplifting and Life-Affirming Experience”: Director Frankie Fenton | It’s Not Yet Dark 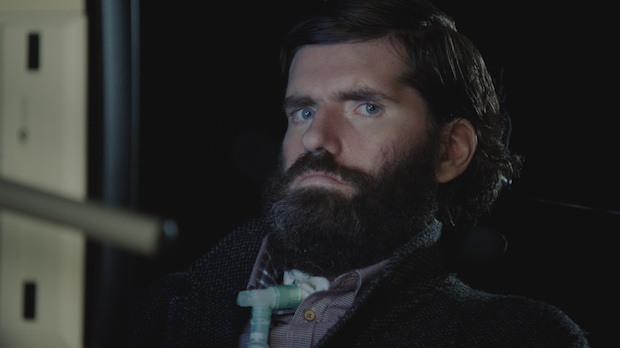 It's Not Yet Dark

This question is, to say the least, spookily resonant with It’s Not Yet Dark. Our documentary is about a man who has lost the ability to speak. Much like every other part of his body except for his eyes, Simon Fitzmaurice, an Irish director, is unable to move. He suffers from Motor Neuron Disease or A.L.S. as it’s called in the US and communicates using a computer screen that tracks the letters his eyes move to.

The fact that speaking for Simon can be a little slower than what most people are used to only allows him to really think before he speaks. An attribute some of us could probably concentrate a little harder on ourselves. He is not only a filmmaker but a poet, and so when he does hit the speak button you can usually expect something quite thoughtful or witty. It’s even more interesting observing people meeting Simon for the first time and confronted with that time delay in feedback. It never ceases to surprise me how different folks react to their own silence. Some are brave and wait patiently, while some need to fill the space with arbitrary small talk or humor.

It was good news when I heard that the next shoot date would be the launch of his autobiography. He wrote it in his own time, with his eyes. It detailed the journey of his film career, the love of his life, Ruth, who he marries, and of course, of the painful repercussions to his debilitating disease. It became quite clear that this would act as the spine to the film. Much of what needed to be communicated to me was already put down in print, carefully thought out and presented in this wonderful piece of work.

To me, communication was never an issue with Simon. The only worry was how would I communicate Simon’s story to you, the audience. If I have managed to get even an ounce of the spirit and fight that flows through Simon Fitzmaurice into the film you will hopefully be in for an uplifting and life-affirming experience.