The F Word: Five Reasons Film Is Still Relevant in a Digital World 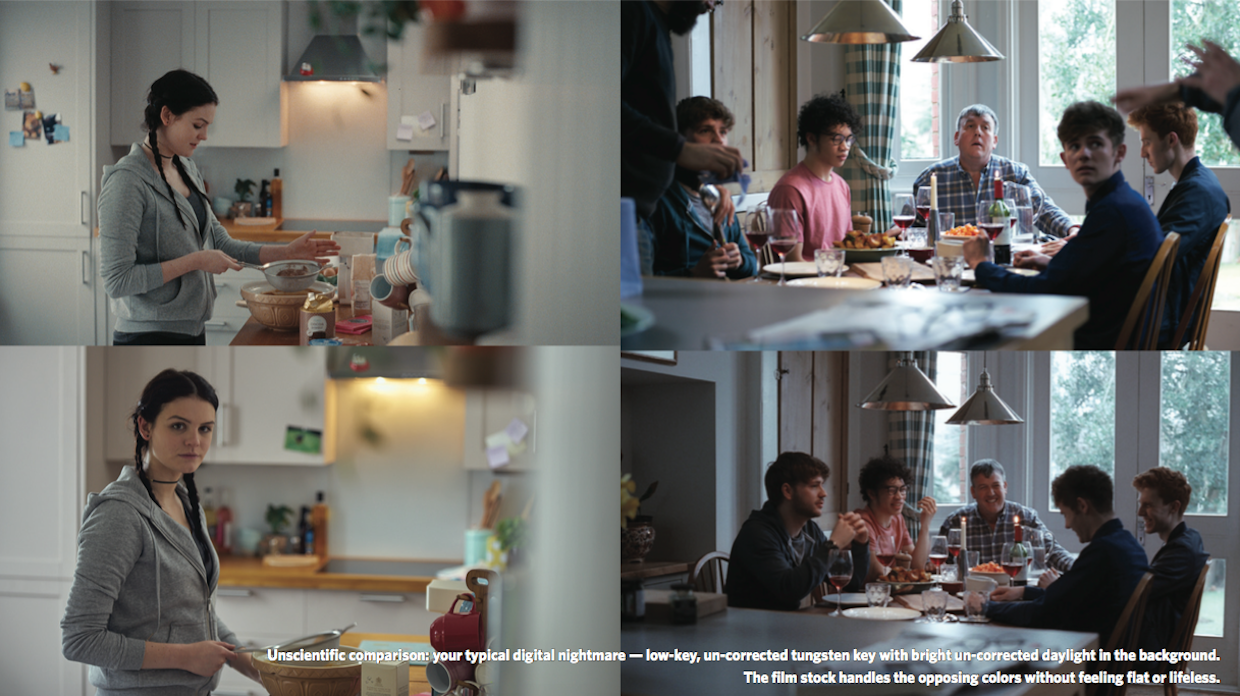 I’ll be honest. I’d all but written film off, except for the few rolls that live in my Pen-F and my Mamiya RB67. In the days of the original RED, the Viper and VariCam, sure, video was a compromise. Those Kodak ads made sense. But now shooting a movie or a commercial on an ALEXA Mini shooting in ARRIRAW — I don’t feel that way anymore. The images are great. Better than great — they’re hard to break, and they grade well. And as film has faded from the independent-moviemaking scene, I can’t emphatically say I feel like I’ve lost something from my work. I remember reading forums where old-timers would talk about their own “soups” for film developing — there was a real craft there that was a beautiful and overly nerdy blend of science and art, and these guys and gals were experimenting on a level that doesn’t really exist anymore. Now you turn the camera on, the sensor and codec does all the work and you like it or you don’t — and do your job accordingly.

I might be breaking form here: Film isn’t really a topic DPs “don’t talk about,” but it’s something many of us don’t talk about anymore. I recently had the privilege to work with Will Lovelace and Dylan Southern, the fine directors who make up thirtytwo, on two projects back-to-back. The first was shot on an ALEXA Mini in ARRIRAW, my comfort zone, and the last was a series of four spots shot on 35mm 5219 and 5213. When the directors mentioned shooting on film I was first surprised, then excited, then really nervous. It had been a good solid two years since I had a film camera in my hand, and that was for an experimental music video, not a national ad campaign. Luckily I never really let go of my light meter after all these years. So I opened up PCAM and got to work. Here are five reasons film is relevant in a digital world.

You tend to focus more on what’s in front of the camera.

When I’m shooting digital there is a lot of emphasis on what’s behind the camera. The monitors — are they OLED? Have they been hardware calibrated? Has anyone touched them!? And then the data — how is it being handled? Who’s my DIT and do they know what they are doing? Can they do live grading and update client or director monitors on the fly as our conditions change? What software are they using? How is it getting to the lab and in what format? Are they actually going to look at my reference grades or just wipe it out and make dailies from Rec. 709 — or worse? When I began the film job, I was surprised at how streamlined it all was. Yes, there was still VTR, but suddenly I didn’t care about any of that, because of course the picture quality of the monitor didn’t matter anymore. As long as it was getting signal, I could do my work. And since all that was relevant in the monitor was the frame, everyone started to care about the shot, not the look! So we spent that extra time making the shot more interesting and finessing the blocking. And all that I could do with my little A7 and a PL adapter, which was much lighter to carry.

You take a moment for that extra rehearsal.

Some of the time I saved by not worrying about what the monitor looked like also went into more rehearsals. And the nobility (and cost) of film asks that its user “has a plan” before the motor starts turning. On a digital set I’ll usually “roll the rehearsal” and subsequently take three or four takes working out the kinks (not to mention all the extra slates) before everyone gets what they wanted. The intangibility of those 1s and 0s leads one to feel like we’re just shooting with air and it doesn’t matter how much of it we use! Of course, that’s far from the truth, and shooting gobs of raw material can cost production plenty as it makes its way down the pipeline. But film still gets a bit of extra respect because you can hear it burning through the gate and those monitors make a cool flicker when the motor gets up to speed. Everyone seems to pay a tiny bit more attention. Of course, just because it’s film doesn’t mean you can’t act reckless, either! Sometimes we’d rough in an idea with the Sony and the directors would be like, “Let’s roll on the rehearsal.” And we did.

I remember back in the “transition days” some film DPs had a bumpy start moving over to digital. They still had big fill sources to give them those coveted ratios that made magic on emulsion. But digital, at least in my opinion, doesn’t want that. It wants direct feedback based on what it’s giving you — something film cameras can’t do. Digital almost always wants way less fill light than your traditional film image. I personally think it wants less exposure in general. I remember seeing a lot of flat, plastic-y looking images showing up between 2008 and 2012 as DPs transitioned to RED and D-21/ALEXAs. You could blame the early builds or limited DR, but as a student of both mediums cutting my teeth on VX1000s and ARRI BL4s, I was pretty well versed on how to exploit digital for its strengths. My first digital feature, Bass Ackwards, we shot on a very early build RED One, and to this day I get people asking me if we shot it on film. I had a fun time with a class of film students (who only worked on film) at Vassar College, where I showed them different clips from different movies all shot with the same camera and we played “shot on what?” Lighting always made a bigger impression than the actual format. Yet, on the other hand, you had DPs who only knew digital and somehow (at least a few of them) transitioned to film beautifully. I think as Vision 2 and 3 rolled out and Kodak pushed hard to keep film on top, it ended up making a product that could take significant abuse. So, when low-budget video DPs start off film jobs under-exposing, leaving the highlights and not using fill light, like they’ve always done (or had to!), they can been rewarded with some surprisingly good images when the dailies come back.

You don’t have to try so hard.

This is dangerous territory, but here goes. I don’t mean you literally don’t have to try to do your job if you are shooting film, but after 60 solid hours of shooting film that week I found myself not sweating certain things. As soon as the dailies started coming back (usually around mid-morning the next day — until then I’m always a little anxious!), I realized, “Oh, I could have gotten away with less here.” Or, “I didn’t need to control those windows so much.” So I didn’t. I was able to just trust “in the stock” and let it do its thing. Some of my digital reference shots were so blown out that it took a little convincing the directors (and myself) that “the film could handle it.” As I started to mention above, the stocks have gotten so good in an attempt to stay relevant — or “grainless” — that all the things we love about film — texture, mixed color temperatures, skin tones and highlights — have gotten really, really good, especially in worst-case scenarios. In my very-much-not-scientific nor side-by-side examples printed here, you can see how effortlessly the 5217 handles a digital disaster: overexposed daylight background, dim tungsten key light and no fill to speak of. The Sony a7R II is no slouch (98 DxOMark score), but it still struggled to hold detail in the highlights, and the skin tones ended up looking lifeless in a formidable attempt to deal with the huge color temp swing. Whereas film just rolls with the punches and makes you look good in the process. Along those same lines, with digital I find myself constantly trying to give it more character than it comes with out of the box.  I’ll throw old glass at it, or underexpose it, or try out weird filter combinations or all of the above in an attempt to get something “organic.”  Film already does all that work for you, so you can rock those new sharp lenses all you want.

In a day and age where the “monitor is god” (to paraphrase Nancy Schreiber in her recent excellent Filmmaker interview), intuition is one of those things that has found itself ending up in the same place as your light meter. You’re seeing a near-finished product right there on set, so there’s no guesswork. Literally. Everyone can see what you are doing, and they have opinions accordingly. I used to joke that I wish the ALEXA had a “video tap” feed: a crummy SD b/w signal that looked like something out of the BL4. Then everyone would start focusing on other things. When you are shooting film it’s sort of the opposite — you don’t have a choice except to work intuitively. Of course it’s a science, too: the zone system and mired shifts and all that good stuff. You need to know how the stock is going to respond with the inputs you feed it. But as you work, you start getting these little feelings. You bump the stop up or down a third right before you roll, and the AC gives you a funny look. On my last job this happened frequently, and the AC would tease me a bit: “So what’s your stop?” And I responded one day, “Well, it doesn’t really matter.” She got a good laugh. I mean, no, a third of a stop isn’t going to change the shot’s intent, nor the final image. But maybe you want to crush that shadow just a hair more, or pop that highlight on a face. You aren’t getting direct feedback from your OLED. You’re just standing there, looking at your meter, or looking at the scene, and you just tilt your head and squint your eyes and something comes to you. And you go with it. There’s a magic there that is relevant and meaningful to your work and its ultimate outcome, and film still delivers on all accounts. I’ll be asking for it more.