by Brandon Harris
in Director Interviews
on Jun 30, 2010 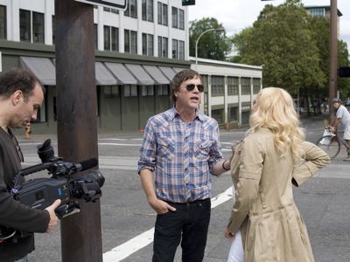 A curious celebration of cinema and the mix of craft, history and ideology that goes into its making, Angela Ismailos’ Great Directors provides a chance to travel into the minds of ten of the world’s most celebrated film directors.  In conversations with Bernardo Bertolucci, David Lynch, Stephen Frears, Agnes Varda, Ken Loach, Liliana Cavani, Todd Haynes, Catherine Breillat, Richard Linklater and John Sayles, Ismailos probes these directors for the secrets of their success while recounting much of the history of post-War world cinema via archival footage, occasionally ponderous black-and-white B-roll of the filmmakers, and mostly insightful voice over commentary. Detailed and revealing, the film’s dissection of the varied and plucky career paths that this odd yet compelling cross section of directing talent has taken makes for fascinating viewing. I mean, where else are you going to hear someone ask David Lynch, “Would you be a different director had you been born in Europe?”

The beautiful and mysterious Ismailos is a Greek jetsetter who seems to be a regular on the New York philanthropy scene. She resides between Paris and New York, holds degrees in law and political science, and despite being a lifelong student of opera and theatre, has chosen cinema as her most recent calling. Great Directors, her directorial debut, opens Friday in New York via Paladin. 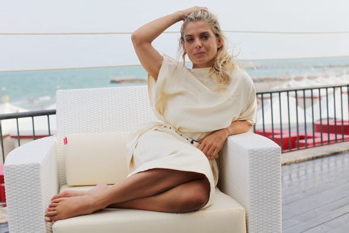 Filmmaker: Even among documentarians, it’s rare that I have the chance to interview someone who’s so accustomed to being in the opposite position. Your film is so much about asking questions.

Ismailos: I hope I did not ask them from a journalist’s point of view.

Filmmaker: You were explicitly trying to avoid journalism?

Ismailos: I wanted to investigate the artists behind the films. The film is not about their filmography, it is about the pain and anxiety of living as an artist in this society which has become so commercial and mainstream.

Filmmaker: Has society so suddenly become commercial and mainstream?

Ismailos: That was my message and vision in talking to these independent directors.

Filmmaker: Where you able to glean what separates these ten from the broad swath of directors working today?

Ismailos: In their films they’re trying… to break moral standards. They are not surrendering to preconceived notions of commerce or audience popularity or preconception of what cinema should be. I believe through the years they are constantly asking their audience to grow and face the uncertainties and unpredictability of adult life. This is the cinema I personally love.

Filmmaker: How did you choose this group of directors? Why this ten? Were there filmmakers you approached who didn’t appear in the film?

Ismailos: Gradually, gradually, gradually I was able to get the directors that I wanted. The first directors I invited onto the project were Robert Altman and Bernardo Bertolucci. When Robert Altman accepted my invitation, Bernardo had already received a letter from me explaining how I was raised as a child, loving neo-realism. He was very touched by the letter I sent him as a filmmaker. He called me within 48 hours and asked me, “When do you want to come to Rome?” So he was the first one I filmed. Robert Altman had to postpone due to health problems so unfortunately I was never able to film him.

Filmmaker: How did the other interviews come about?

Ismailos: I wanted to cover the French cinema and I love the controversial cinema of Catherine Breilliat and how she portrays the emotional and physical travails of women in her cinema. Agnes Varda I knew very well and I hoped she would be in the film and it became a dream for me to film her in her courtyard in Paris. After having four directors it was much easier to get Ken Loach and Steven Frears. The last director I added to the film was David Lynch. He was the most difficult to get.

Filmmaker: He’s notorious for not wanting to talk much about the films themselves.

Ismailos: He told me, “I’m going to give you two hours because I love your idea.” He’s read the script I’m developing, The City of a Dead Woman. We sat there for hours talking about everything. The directors were very engaged in our conversations.

Filmmaker: Were you able to piece together any common experience these directors had in their individuals paths to the heights of world cinema?

Ismailos: Everyone’s beginning is different. They come from different backgrounds, different countries, different cultures. Most of them are passionate about doing the films they want to do, especially the European directors versus the American directors, who sometimes have to surrender to invitations they get from studios or HBO or whatever. It’s a different culture. In America, art and cinema is very much connected to business, which it’s not in the European cinema.

Bertolucci said some really wise things about his career, how he started, about how Pasolini gave him the break to start his career. He had never touched a camera in his life and Pasolini said, “Neither have I. You become a filmmaker on the set.” Ken Loach said something very wise to me. “The more money you have from a producer, the less freedom you’ll have as a filmmaker.” So there were many fascinating statements. The passion that’s involved in their cinema, its amazing.

Filmmaker: How did you first become interested in cinema?

Ismailos: I started directing plays at a very young age. From the age of eight I was directing plays from mythology, ancient drama, theatre, daily plays of life. I guess I am a writer. I started writing my own scripts. I was exposed by my family to legendary filmmakers like Robert Bresson, Jean Renoir, Andrei Tarkovsky, Eric Rohmer, so I had alot of knowledge of these major filmmakers of the world and I had alot of archival work I was collecting from Cinematheque Francaise, from the movements, French New Wave, the Italian movement of cinema. So I wanted to bring that into the film. I was able to get contemporary directors to walk this journey with me.

Filmmaker: Some of the B-roll footage you include that you yourself are in seems to be trying to evoke the sensuality of European modernist filmmaking.

Ismailos: I love black-and-white and old films. I loved everything I did in Rome, walking in the gardens in Paris. I love Bergman’s cinema. Bergman is the director that influenced me the most. I’m a woman’s director. I love women in films. So this is what I’m going to be doing, portraying women in my cinema.

Filmmaker: Are you considering a follow-up with other directors?

Ismailos: There’s alot of demand. People would like to see how I can penetrate into the lives of Wim Wenders and Michael Haneke, there are so many directors I would have loved to include in this first volume. So after my feature, perhaps I will revisit the subject.