28 Films, TV and VR Pieces We’re Excited About at the 2017 Tribeca Film Festival 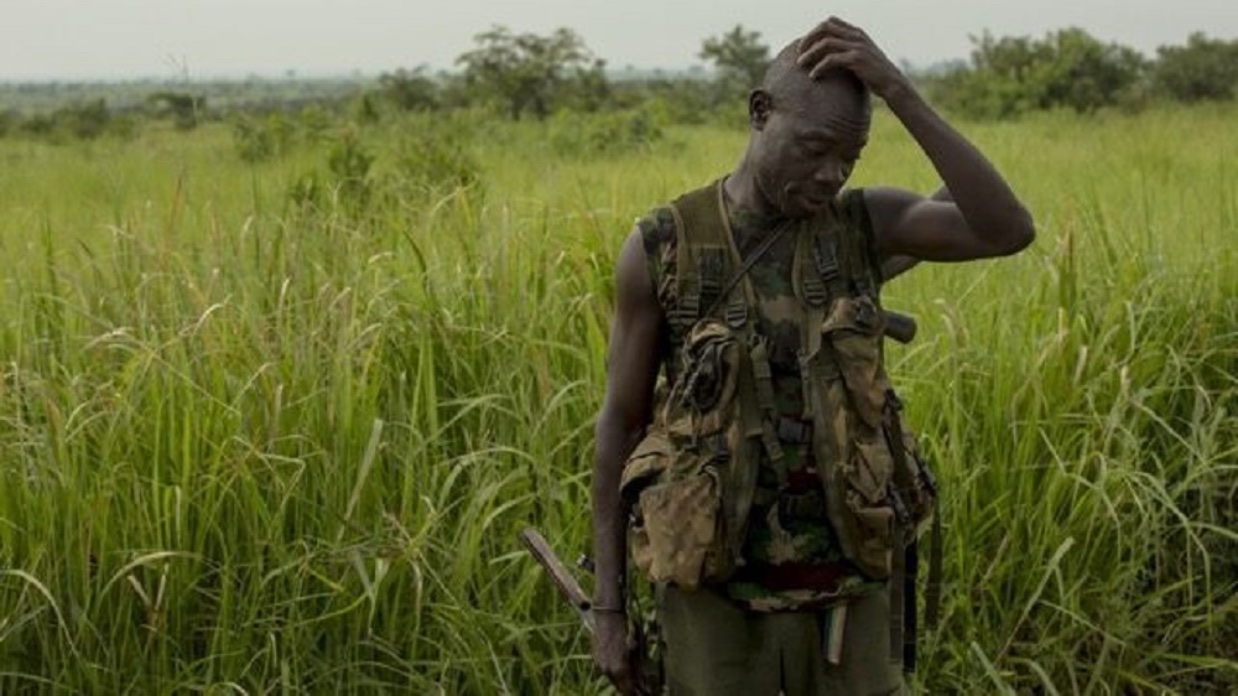 The Protectors: Walk in the Ranger's Shoes

Kicking off tonight with an all-star Radio City concert following the premiere of the Clive Davis doc, The Soundtrack of Our Lives, the Tribeca Film Festival once more offers a near-overwhelming array of new work spread across not just film but TV, VR, gaming and music. The program has been slimmed down this year, say the programmers, but the below list of works we’re excited about could still stretch many times fold. Nonetheless, from myself and our various Tribeca contributors this year, here are 28 works we have reason to excitedly anticipate.

The Departure. Lana Wilson follows up her abortion documentary After Tiller (directed with Martha Shane) with another intimate, penetrating work. In The Departure, a world premiere, Wilson travels to Japan to follow Ittetuso Nemoto, a punk rocker turned Buddhist priest who, in quietly wrenching ritualistic sessions, counsels the suicidal while facing down his own demons. — Scott Macaulay

The Entire N.O.W Section. It’s rare to find a festival that, amidst all the celebrity red carpets, puts such keen focus on its new media programming. This year, the N.O.W section has exciting new work from Eli Roth, women in the horror realm (yes!), the buzzy comedy Shiva and New Deep South: House of JXN, one of our favorite new media series on the circuit this year. The section reaches across multiple genres, viewpoints and should illuminate some exciting new voices. — Meredith Alloway

The Endless. With Resolution and then Spring, Justin Benson and Aaron Moorehead have been carving out a solid reputation for innovative, character-based genre work. This new film, included in Tribeca’s U.S. Narrative Competition, posits the tale of two brothers drawn, years later, back to the cult they escaped as children. — SM

Keep the Change. Columbia University film student Rachel Israel adapted her sensitive, charming and acclaimed short film, Keep the Change, about the romance between an autistic man and woman, into this feature, which stars a non-professional cast of actors all on the autism spectrum. — SM

Copwatch. A first feature from UK journalist-turned-filmmaker Camilla Hall, this documentary studies the rise of citizen journalism, and the group We Copwatch in particular, as video documentation of police brutality continues to rise throughout the globe. Participating in the film is Ramsey Orta, the man who filmed the infamous footage of Eric Garner’s murder, and others who have found activism through the necessary patrolling of law enforcement. — Erik Luers

Flames. Films that bridge the line between doc and narrative are swelling in popularity — and for good reason. If you’re craving reality like the rest of culture but want something a bit more highbrow than The Bachelor, Flames could be your golden ticket. Josephine Decker (Thou Wast Mild and Lovely) and former boyfriend Zefrey Throwell (he directed, she “co-directed for a long time”) document their eight-month relationship over the course of five years in post. TV series The Affair is brilliant in its examining of two different perspectives of participants in a relationship, and we hope Flames treads the same fluid line between one person’s truth compared to the other. — MA

The Sensitives. We recently featured cinematographer Drew Xanthopolous on our site discussing his lensing of Travis Matthews’s Berlin-premiering Discreet, and now Xanthopolous has stepped into the director’s chair with a documentary that sounds like a real-life version of Safe. In The Sensitives, Xanthopoulos captures the plight of a number of people who are allergic to many of the elements of modern life. — SM

Shadowman. Shadowman is a portrait of artist Richard Hambleton, known for his menacing figurative street art back in the early ’80s. With both his body and his artistic output affected by drug addiction, Hambleton has had a surprising number of second acts and revivals, all of which are chronicled in Oren Jacoby’s BBC Storyville doc. — SM

The Reagan Show. From Manakamana‘s Pacho Velez and Town Hall‘s Sierra Pettengill, the latter of whom has made archival work in recent movies by Mike Mills and Jim Jarmusch sing, comes a timely, humorous and mildly horrific look at the man who fully made the Presidency a televised theatrical performance, Ronald Reagan. Acquired by CNN pre-festival, it looks to repeat the success Penny Lane’s all archival Presidential pic Our Nixon had on the circuit several years ago. — Brandon Harris

Hair. Some films peak your interest on logline alone, and Hair‘s (“An unscripted dialogue between John Turturro and Bobby Cannavale about a man’s particularness about his hair”) fits that bill. A world premiere short directed by Turturro and produced by its two stars, I couldn’t even begin to guess how the premise factors into the presented story, but color me intrigued nonetheless. Shot by Eraserhead/Blue Velvet DP Fred Elmes, I can almost guarantee the film won’t outlast its brief five-minute running time. — EL

A Suitable Girl. Sarita Khurana and Smriti Mundhra’s documentary on arranged marriage in India has been years in the works as they’ve followed several young women caught between modern attitudes and the country’s entrenched traditions. — SM

The Lovers. Debra Winger, Debra Winger, Debra Winger. Before there was Jenny Slate, the resident lovable, grounded girl-next-door, there was Winger in classics like Urban Cowboy and Terms of Endearment. Unlike some other actresses of her generation, she’s stayed fairly out of the spotlight (see Searching for Debra Winger). The film looks like a more honest, real It’s Complicated and with co-star Tracy Letts (who is also genius), here’s to hoping we see more of Winger going forward. — MA

Blackout. One of the standout pieces in Tribeca’s tech-focused Storyscapes section promises to be this one from Brooklyn-based studio Scatter, a “participatory volumetric VR project” centered around political dialogue exchanged on the New York City subway. No viewing of Blackout will be the same, promises the press materials. — SM

The Trip to Spain. The previous two films in Michael Winterbottom’s travel and food films(/cutdowns of TV series) rank very high among the most unassumingly delightful comedies of the last few years, and I’m looking forward to this latest. — Vadim Rizov

Love After Love. Well, for starters, you won’t see this reviewed on these pages by yours truly; I’m in it (see “Author at Meeting”) and write about the experience, briefly, in my forthcoming book (which I describe in this movie). I can attest to the fact however that Russ Harbaugh, for whom this is a directorial debut, has gotten stellar work from Andie MacDowell, his cinematographer Chris Teague and his co-editor John Magary, whose whimsical, brilliant and odd debut feature The Mend this highly unusual movie resembles in part. — BH

The Last Goodbye. In works like Clouds over Sidra, Gabo Arora has established himself as one of VR’s modern masters, bringing a keen understanding of film language to politically charged work. The Last Goodbye, directed with Ari Palitz, is his first room-scale piece and follows Holocaust survivor Pinchas Gutter as he revisits the camp he was once imprisoned in. — SM

The Protectors: Walk in the Ranger’s Shoes. Zero Dark 30 director Kathryn Bigelow teams with Imraan Ismail for her virst VR piece, which immerses viewers in a day in the life of a ranger at the Garamba National Park in Africa, where elephants fall prey to poachers after their ivory tusks. — SM

My Friend Dahmer. I’m a sucker for true-crime stories, and this one, based on the graphic novel by serial killer Jeffrey Dahmer’s classmate Derf Backderf, sounds like it has the potential to be less an exploitative horror movie than a compelling procedural. It has authenticity on its side (some of it was actually shot in Dahmer’s childhood home!) and an out-of-the-box cast (Disney Channel star Ross Lynch plays the title character). — EL

The Exception. If you fancy yourself even a moderate theater fan, chances are you’re already familiar with the name David Leveaux. A five-time Tony nominee for Broadway revivals like Nine and a Moon for the Misbegotten, Leveaux makes his feature debut here, teaming with Christopher Plummer for a World War II-set drama that sounds more provocative than stuffy. — EL

The Sinner. Another TV pilot being aired at Tribeca is this Jessica Biel-starring USA show, which finds director Antonio Campos following up his excellent psychological character study Christine with another tale of a woman whose motives provide the work’s narrative mystery. — SM

The Circle. Everything director James Ponsoldt has done in the past few years, including The Spectacular Now and the spectacular Smashed, has been impressive. This is his biggest film yet, an adaptation of David Eggers’ novel, and we’re excited to see his knack for provoking raw performances in collaboration with Emma Watson and, obviously, Tom Hanks, who seems like a perfect fit for Ponsoldt’s directorial tone. — MA

Lost and Found. In Tribeca’s section for independent pilots come this character-based show about an L.A. couple in the process of breaking up who stage an “un-wedding party” to celebrate. It’s executive produced by actors Haroula Rose and Melonie Diaz, who both star alongside other independent notables including Terence Nance. — SM

Letter to the Free. Academy Award-nominated cinematographer Bradford Young goes behind the prison walls to direct this short featuring some of today’s most popular jazz artists, like Karriem Riggins and Andra Day. Inspired by a concept by Young and frequent collaborator Common, this short appears to be as much about the music as it is the Queens Detention Complex where the story is set. Ava Duvernay is an executive producer. — EL

Rock ‘n Roll. I’ve heard very good things about Guillaume Canet’s Rock’n Roll, in which Canet struggles to get his next movie financed while partner Marion Cotillard struggles to brush up on her Quebecois while prepping for Xavier Dolan’s latest. Sounds like a riot. — VR

The Godfather and The Godfather Part II. Power, corruption and their entwining within a corrosive family dynasty — this 45th anniversary screening of Francis Ford Coppola’s American epic could not be more timely. Last year’s closing night screening of Taxi Driver, with all the principals on stage, was an amazing experience even for someone who has seen the film countless times. With Taylor Hackford moderating a post-film conversation between Coppola, Al Pacino, James Caan, Robert Duvall, Diane Keaton, Talia Shire, and Robert De Niro, this year’s closer, at Radio City Music Hall, should be just as revelatory. — SM