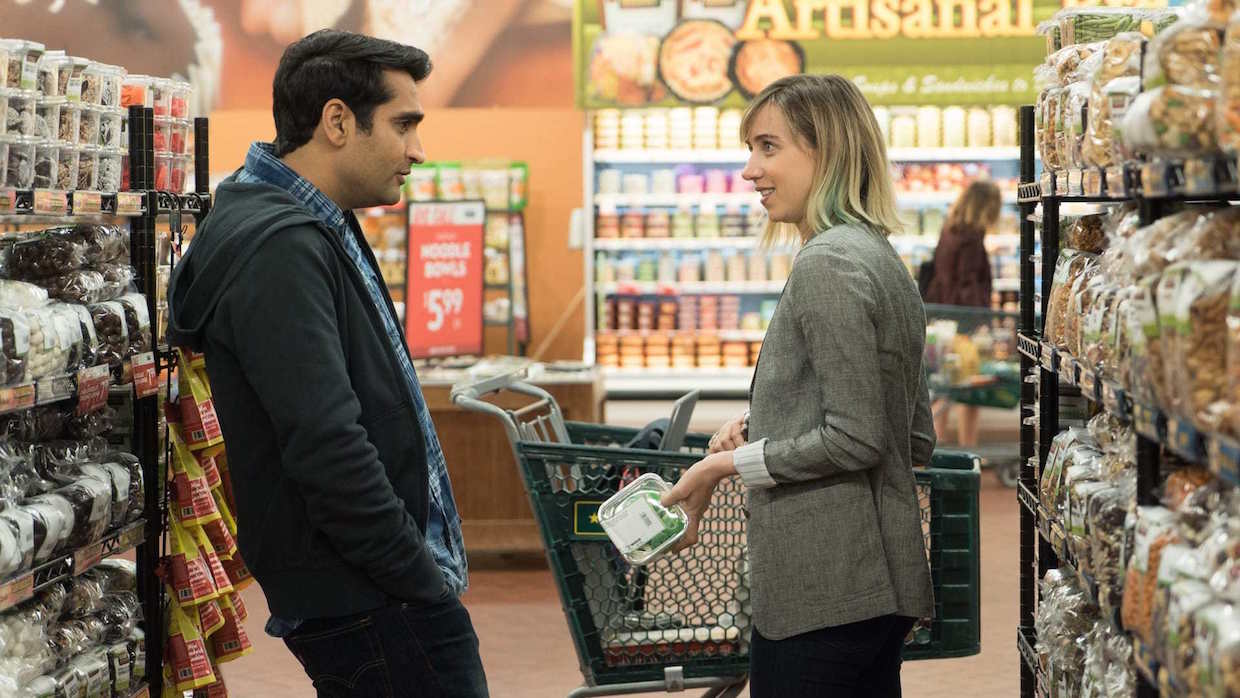 Kumail Nanjiani and Zoe Kazan in The Big Sick

by Justin Stewart
in Directors, Interviews
on Jun 22, 2017

Michael Showalter was a known quantity in the comedy world before he gave feature directing a shot in 2005 with the unassuming indie The Baxter. He started out in the early 90s on MTV’s sketch show The State, which spawned the careers of many talents with whom Showalter has continued to collaborate on shows like Stella and films like They Came Together and Wet Hot American Summer (which stars Showalter and has led to two Netflix follow-up series). Much of this work, as well as Showalter’s excursive, vaguely non-committal standup, is characterized by a warm disdain for the form. In particular, his films with David Wain gleefully mock comedic tropes and often abandon basic filmmaking grammar in the anarchic spirit of The Marx Brothers and Abrahams/Zucker films like Airplane! and The Naked Gun.

His third film as director, The Big Sick, evidences the best kind of maturation, exploring weightier matters and a broader patch of the human experience while retaining the commitment to funniness that got Showalter here. The screenplay by Kumail Nanjiani and Emily V. Gordon is the very nearly autobiographical story of their courtship, which begins cutely enough but is soon made harrowing by the onset of a life-threatening virus in Emily, played by Zoe Kazan. Nanjiani stars as a version of his comedian self, though the timeline is updated to include things like Uber and Siri. Emily, a grad student, has her relationship with Kumail complicated by his strict Pakistani family, who insist that he accept an arranged marriage with one of many eligible Pakistani women his mother (Zenobia Shroff) blithely schemes to have “drop by” the house. Littered with memorable performances by both comedians and bona fide actors like Holly Hunter, The Big Sick is, most importantly, hilarious, a rare quality impossible to overvalue.

I spoke with Showalter over the phone about some influences and what it’s like to direct something so personally dear to his collaborators. Produced by Judd Apatow and Barry Mendel, The Big Sick premiered at Sundance and will open in limited release this Friday.

Filmmaker: I know that Nanjiani was in your last film and he worked on a TV show with you. Were you always the first choice to direct or did you have to lobby?

Showalter: I don’t know if I was the first choice or not. I’m friends with Kumail and Emily. I read the script, loved it, called Kumail the next day and said, “Do you have a director yet?” He didn’t, so I asked “What do I need to do to convince you that I’m the right person?” I met with Kumail, Emily, Judd and Barry and pitched my vision for the movie. I worked on the script with them for about a year before we began to shoot. They had been working on it for a few years before I ever came to the script, but I’ve been with it for about two years now.

Filmmaker: I’ve read about some of your active decisions, like having different color palettes and camera movements for different characters, so you were obviously fully engaged, but was there any sense of wanting your direction to remain more or less invisible out of deference to the screenplay?

Showalter: I think there’s an aesthetic to the way I like to direct. It may seem sort of naturalistic, but I think I directed the way I felt it should be directed, if that makes any sense. It wasn’t in any way like, “I’m not going to do any flashy stuff because I don’t want to interfere,” it was really just that this is how this movie needs to feel. And the kind of influences I have, whether it’s some of Woody Allen’s movies or Richard Curtis or even someone like Alexander Payne or Jason Reitman, I think that they have a similar kind of naturalistic aesthetic where you’re not necessarily trying to draw the audience’s attention to the camera, but by the same token you are trying to create a tone and aesthetic that is pleasing to the eye. It’s a little bit of a theatrical approach, where the camera is just kind of watching these scenes as an audience member would, so the camera is kind of a human. It’s a human perspective, not necessarily a kind of fantastical point of view. It’s a very human point of view.

Filmmaker: It’s not a God’s-eye-view.

Filmmaker: How collaborative and open to suggestions are you while filming?

Showalter: Very, especially on a movie like this, where you’ve got Kumail and Emily, who are the writers and producers and Kumail is the star and it’s their real story. And you’ve got the producers, who bring an enormous amount of wisdom, experience, creativity and their own way of doing things, and these amazing cast members. I very much was in a facilitator role, wanting to make sure that everybody felt like their ideas were being heard.

Filmmaker: How much input did Apatow or Mendel have? Were they on set?

Showalter: Barry was on set every day and Judd was there periodically, a lot at the beginning and then at the end. Barry has been hands-on from the beginning to the end and Judd has been involved at every stage of the process. He’s involved in reading the script, he’s involved in postproduction when we’re editing and picking the music and sound, as well as getting into screenings and getting feedback. I was kind of in the center channeling it all through.

Filmmaker: I know you’re on record as being a fan of romantic comedies, but in some of your previous work that you’ve co-wrote or directed it seemed like you were trying to deconstruct or question and parody certain comedy movie tropes and cliches, however affectionately. Is there a mental light switch that you need to flip to move to something a little more straightforward, or are you used to the different gears at this point?

Showalter: I think making the movie that I did before this [Hello, My Name Is Doris] was a big step in terms of stepping out of just being comedic into something where the comedy and drama are both treated with sincerity and earnestness. It’s always a little bit scary to step out of your comfort zone and that’s probably a big part of it – the dramatic stuff just wasn’t necessarily in my comfort zone. But after doing Doris and working with Sally Field, it gave me confidence to do that with The Big Sick as well.

Filmmaker: Not that these labels matter much, but did you think of yourself as making a romantic comedy, or something else? Were you conscious of not letting it drift too far from comedy once it takes a darker turn?

Showalter: Yeah, definitely. More just that it was a comedy. It was never going to be OK to lose sight of the fact that this movie needed to be funny. I want people to leave the theater and say, “That was a comedy. It had all this heart in it and all these dramatic scenes, but at its core it’s a comedy.”

Filmmaker: I saw Chicago on the poster and when Kumail’s driving around there’s a lot of Chicago flavor but then I read that it was shot in New York. How much of the movie was shot in Chicago?

Filmmaker: Was the hospital real or a set?

Filmmaker: Though he’s done some drama, Ray Romano is mostly associated with a sitcom. Did you and Ray want to play against his popular reputation a little?

Showalter: I’ve seen him making a clear effort to find really dramatic roles to play on Vinyl, Men of a Certain Age and Parenthood. He could do whatever he wants but I’ve seen him go for these smaller, more nuanced acting roles so I was very excited to have him, not just for his comic ability but also because he’s a great actor. I think people are seeing that now, just how great of an actor he is.

Filmmaker: There are several great performances in some of the minor roles, and a sensitivity to the sort of collateral damage from both Kumail’s doomed arranged marriage hopefuls and his comedic ambitions. There’s Kurt Braunohler’s roommate character who gets left behind, and the disappointed potential wives brought in by Kumail’s Pakistani mother, including Vella Lovell, who has a wonderful scene in which she wakes Kumail up out of some myopia. These minor figures each get their moments of dignity, and I see a connection here to the underdogs in The Baxter and Hello, My Name Is Doris. Is it a natural instinct of yours to not forget about the less lucky characters often swept aside by the main, driving story, and give them some moments?

Showalter: Yeah, I think those can sometimes be some of the most interesting characters. Again, going to some of the movies that I really loved growing up — whether it’s a Woody Allen ensemble or Four Weddings and a Funeral or a Cameron Crowe movie — almost every character, no matter how big or small, you learn a little bit about that person and get to know them a little bit. I really like that approach in which everyone in the movie, even if they happen to not be the focus of the movie, is significant. I like to imagine that all of the characters have stories to tell and if we can get a little snapshot of what each character is like and what they’re going through, it just adds to the overall movie. I love Kurt’s character. There’s a guy who’s probably just not going to make it, and that’s OK.

Filmmaker: Did the film evolve much in the editing process? I assume there was plenty more comedy club banter to go around.

Showalter: We shot a ton of stuff. There were really funny scenes we cut for one reason or another. But the first cut of the movie, the director’s cut, was in a lot of ways the movie that exists now. We did months and months of fine-tuning and polishing and moving things around to kind of maximize the story, but the DNA of the movie stayed the same from the script to shooting to editing.

Filmmaker: Were you surprised by the great response at Sundance or did you know you had something special?

Showalter: We had done a couple screenings in L.A. in the months leading up to Sundance, some test screenings, and for friends and family as well, so we’d seen the movie in front of a bunch of different audiences. From that we had a good idea of how people were reacting to the movie. When Doris went to South by Southwest and we had our premiere, that was the first time the movie had been seen in front of a large audience of any kind. With The Big Sick, I was in no way thinking that everyone’s going to love this movie, but it helps to make sure you’re not completely nervous and panicking.

Filmmaker: Do you plan to keep “director” at the front of your multi-hyphenate career description and downgrade the acting and standup?

Showalter: Yeah. I really like the directing and the writing. That feels more natural to me. I mean, it’s fun to act and I’m sure I’ll continue to do that in bits and pieces but it’s not the thing that I’m really passionate about at the moment.