Like Sand Through the Hourglass: Twin Peaks: The Return 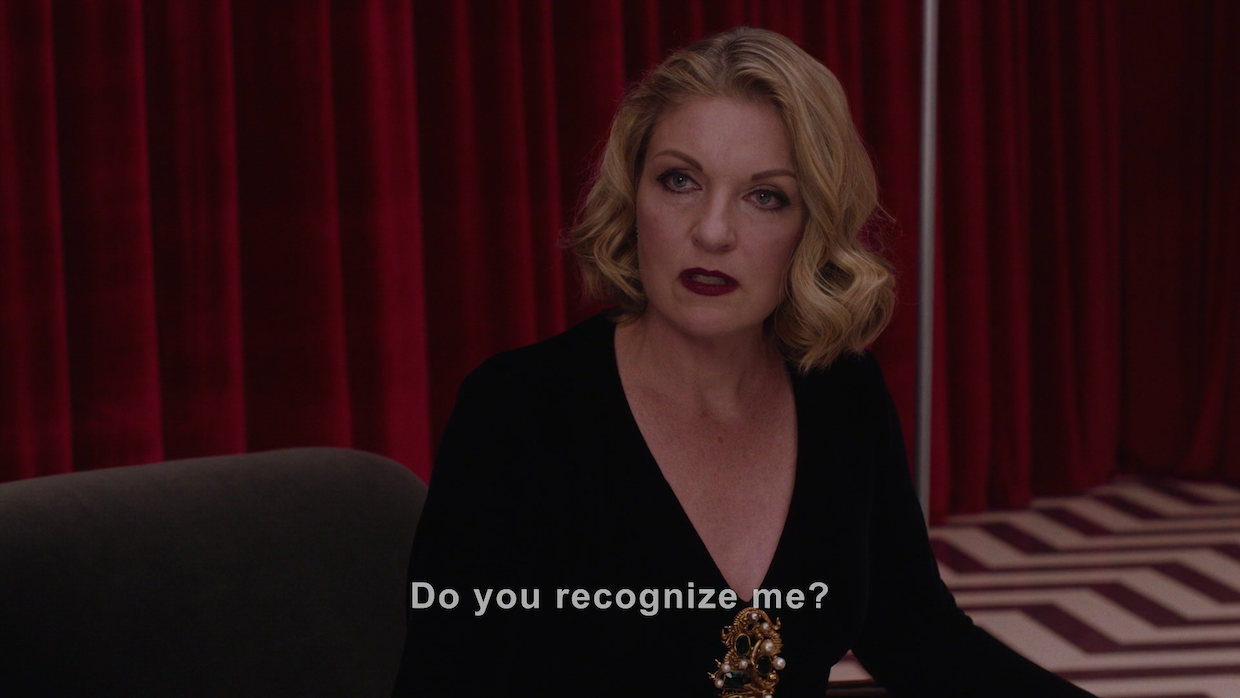 In the 1970s, the experimental filmmaker Gregory Markopoulos wrote a piece called “Towards a Complete Order of the Temenos.” In the years that followed, he began to take all of his previously made films and tear them apart frame by frame, taking the pieces and parts — along with newly shot footage and black and white leader — to create what would be his final project, ENIAIOS. The career-spanning contents of the film were combined and alternated to form an epic flicker film encompassing a lifetime of materials and ideas. The project, an 80-hour cycle of films, was completed but not printed for screening when Markopoulos died in 1992. The terms of his magnum opus did not end there, though. ENIAIOS was specifically designed to be screened only in the Temenos, a field near the village of Lyssaraia where his father was born in Greece. Since Markopoulos’s death, his partner Robert Beavers has somewhat miraculously screened a few cycles at the sacred space every four years. It has become a pilgrimage of sorts for interested viewers. In between viewings, he raises money and elicits help from interested people to splice and print the necessary cycles.

Duration is key to the singular experience as the length of the cycle (usually in the neighborhood of three hours) and the amount of time you can look at one image or scene (mere seconds), create a transfixing reality that feels unlike anything you’ve ever experienced. The rhythm of your body seems to change as time loses its usually too well known meaning. There is no soundtrack save the sound of the projector and the nearby cicadas.

As a child of the ’80s and the ’90s, there was a certain ritual to watching a television show. I had to be in a certain place (the family room or basement), at precisely the scheduled time (right when the program aired) if I wanted to watch. Unless I was recording to VHS, there was no re-do, unless I successfully completed the ritual when/if the show aired reruns and I did the research to learn when it was going to air. For me personally, and for many of my friends, Twin Peaks: The Return marks another return to the kind of viewing we grew up with. It’s a hard, 18 week-commitment in a commitment-less age. On Sunday nights, choices have to be made. Streaming, of course, allows leniency for those with unbreakable conflicts but for the most part, people, at least the people I know in New York, seem to be spending their Sunday nights, starting at 9:00 PM, with Showtime and Lynch.

Nine episodes in, I have to wonder if one of the reasons the first Twin Peaks was so inspiring to so many people — many of whom would later become filmmakers or artists or work in the arts themselves — and why it has stayed so long in people’s minds and hearts is that it had more freedom to exist as an open-ended experience. When an episode ended you were able to think about it on your own terms and develop your own relationship to the material. Discussion was more focused, in person, and limited to the friends or family you watched with and maybe the co-workers or classmates you saw the next day. There was no flurry of hard-to-resist Rosetta Stone-esque recaps across the web telling you what each and every detail might signify, who this or that character might really be, and calling out a million (im)possible reference points. And there was definitely no one on Twitter telling you your opinion, your inspiration, was simply incorrect.

My first remark after watching the first two episodes was that I’d never seen anything that seemed to so fully and innately understand what it feels like to be living in 2017 and, even more so, how it feels to live in 2017 compared to how it felt to live in 1990. It’s embedded in so many of the elements of the show, the most monumental being the image. In slightly over 25 years we’ve gone from the softness of youth captured on the softness of film and viewed on textured and fuzzy CRTs to the harshness of old age captured digitally‎ in all of its horrific honesty and seen on computer and LCD screens, many of which are likely set to the overly bright sports mode (whether on purpose or accidentally).

In that way, and more, Twin Peaks: The Return is foundationally about (the often shushed) process of aging and of dying. Beloved people, the same characters and bodies, who you watched in the prime of their youth (and perhaps your own), are now 25+ years older and confronting mortality and the immense physical challenges of aging. Each episode brings a new shock in an old friend’s appearance and in the realization of how young people look now versus how they looked then. Many episodes end with an RIP dedication.

But it isn’t just characters who have been affected by Father Time; the actual form and content of the show is also being dictated by an astounding flurry of actual life and death, by who is alive and who has passed away. My heart thuds to the floor every time the name Phillip Jeffries is mentioned as I wonder what should have been. It’s hard to imagine what Episode 8 might have looked like had Frank Silva still been with us. What would Bad Cooper, with his luscious locks, be like? And would the brilliant Matthew Lillard and Jane Adams (Adams’s delivery of “he’s my kid’s principal” is my favorite joke thus far) even need be on the show if the even more brilliant Don S. Davis were still alive? Each twist and turn, each loosely connected segment is ultimately an answer to someone’s unexpected absence. In these ways Twin Peaks: The Return, even as a “revival” and with Lynch’s gift for the uncanny, is not just anti-nostalgia but, at least thus far, is taking a giant laughing dump on the concept.

The director Henry King has long been (wrongly) pigeon-holed as a nostalgist due to the many films he made during the golden age of Hollywood in the somewhat loose genre of Americana. He loved to spend time in the past in rural America, often piloting his own plane to the smaller places in the country to find the perfect location for his films. 1952’s Wait Till the Sun Shines, Nellie is more or less his last film in this vein. On the surface it’s simply another slice of blueberry Americana set in a small Illinois town at the turn of the century, the story framed by the future celebration of the town’s semi-centennial. But underneath it’s an incredibly dark film, both in plot but also aesthetically, with many of the scenes taking place under the night’s dark sky. The story revolves around the Halper family, specifically husband Ben and wife Nellie, and begins when they are newly married and he tricks her into living in said small town. She thought they were headed to Chicago. The American Dream moves forward as Ben establishes a successful barbershop business, buys a home (that Nellie must maintain), and the town begins to grow. All the while Nellie revolts against her new life, first internally and then externally. As her husband continues to look past her obvious suffering, the movie pushes ahead, until halfway through when Nellie can no longer take life in the small, folksy town, she doesn’t fit, and what that kind of life means for her specifically. She has an affair and plans to run away to Chicago on a train. Instead she finds a shocking and violent end in a train crash. The movie only gets darker as Ben Halper and the town try to come to terms with her death, as well as time passing.

Wait Till the Sun Shines, Nellie is the first movie David Lynch says he saw.