Twin Peaks: The Return: The Cult of Faith 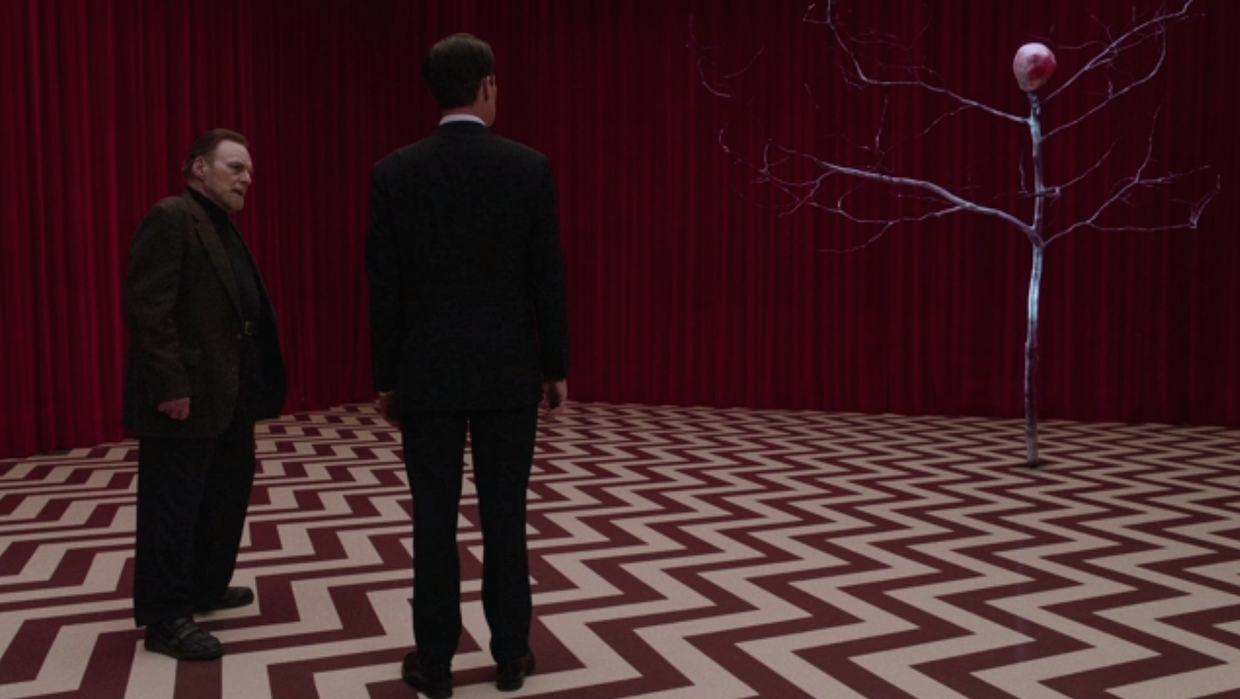 Al Strobel, Kyle MacLachlan and a tree in Twin Peaks: The Return

The original Twin Peaks was some kind of scary dream woven from the psychic residue after a binge of soap operas and donuts. The new episodes are the scary dream after you watch Twin Peaks. I know this because on several occasions during the last quarter century I experienced quite vivid dreams in which I was watching (or inside of) a third season of Twin Peaks, and it always felt pretty remarkably like this new Return does. (I cannot predict what recursive night terrors might follow from these episodes.) But, perhaps because it seems already vetted by my subconscious, I say yes-yes-yes to everything this show offers, and it impresses upon me how very powerful a factor in this medium is faith. Art in which you have faith can do extraordinary things that other art cannot. Many a great religious artist has understood this, and I suppose the Marvel people do too. When you have already banked your audience’s spiritual fealty before they walk in the door, merely by sharing their belief as you create, you can navigate a path to their euphoria. So it has been for me and Twin Peaks so far.

My wife, whom I’d subjected to the original series early in our courtship, dropped out of the new season 2.5 episodes in. She’d considered the original to be a kind of master class in unlikely tonal balance, and the new one, of course, felt nothing like the original. I told her that I’d read on the internet that they’d originally planned to do nine episodes, but after Lynch and Showtime emerged from whatever their contract dispute was, the order mysteriously expanded to 18. We imagined Mark Frost saying to Lynch, “So what are we going to do with these other nine hours?” and Lynch saying (in Gordon Cole voice), “Don’t worry, everything can just take twice as long!” For my wife, with her objective, sane perspective, this was not necessarily a good thing. For me, naturally, the impossible pacing seems just further proof of its holiness.

And this is not nearly the first time that Peaks has shed casual fans. How many friends have told me they gave up on the show in the infamous fog of season 2, with all its embarrassingly dumbass dead end storylines (that even Lynch thought were bullshit)? I am always sorely disappointed in these people. And the Cannes audiences who supposedly booed Fire Walk With Me at its premiere? Comment dit-on “What the fuck” en français? Does no one understand what it means to be given such an extraordinary gift?

Yes, it is nearly impossible to imagine how Lynch and Frost might have lost me with this (though I have not forgotten sitting in the theater the opening weekend of The Phantom Menace and learning how it feels when faith slowly, gut-twistingly erodes). Clever critics can analyze the show, vulgar ones can “rate” or “rank” it, and I will do neither because I am a cult member, merely testifying that prophecy has been fulfilled and offering ecstatic praise. In 1991 when the original went off the air, I said to my pals, “But can you imagine how insane a third season was going to be?” And it is far more bananas than I ever could have hoped, if not exactly a third season — really more like season 28 or so, with the 25 before it having gone missing. There is a stark disconnect across that long gap, but then it’s not like I can really account for how I got from 1991 to 2017 myself. That’s at least as surreal.

What I mean to say is, I love every minute of the show (particularly the ones that feel like they take two or three or four minutes).

I receive it only in gratitude.

I think it is even better than if David Lynch had accepted George Lucas’ offer to direct Return of the Jedi.

I am glad that Lynch knows what a special actor he is, and I hope that Scorsese and Spike Lee will have the balls to cast themselves so prominently again before they retire.

I am currently paying money for a Showtime subscription and I will pay twice that amount to any network willing to reboot On the Air.