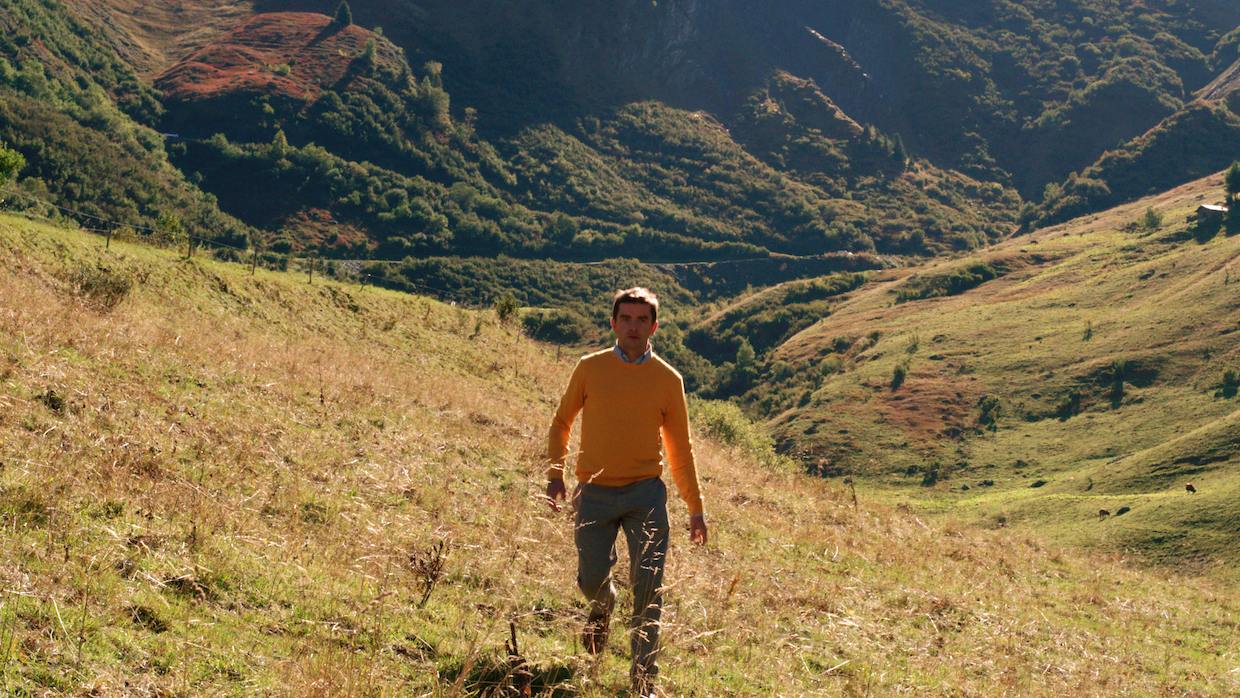 Pascal Cervo in 4 Days in France

There’s a critical cliche often lobbed at limited-screen-time players who make big impressions: that they seem to “have their own lives that go on before and after the movie.” Generally speaking, this doesn’t mean anything more than that characters have been written and performed in such a way that they don’t come off as crude ciphers merely delivering exposition or enabling plot pivots, but this really does apply in a meaningful way to Jerome Reybaud’s 4 Days in France. The title is literal: one morning, Pierre (Pascal Cervo) wakes up and, for no apparent reason, leaves the apartment he shares with partner Paul (Arthur Igual). He drives out of Paris, with the goal to never return but no particular destination in mind; Paul soon follows, in fairly frantic pursuit of his fleeing lover. Both are on Grindr, and Paul keeps driving to new locations so he can reset the range of his search results and find the evasive Pierre once again. It takes four days, and a cross-country survey of a considerable part of France, to resolve this situation. The many, many shots through the dashboard or gazing at the driver make this the single best film to convey the experience of extended cross-country driving since, let’s say, The Brown Bunny.

Because the movie is a) French b) features gay men, 4 Days has garnered comparisons to Alain Guiraudie, but Reybaud’s first narrative feature (he’s made shorts and a documentary previously) has little in common with his work. Guiraudie sets characters out on itinerant quests across the rural countryside, generally on foot, while burrowing deep into their pansexual identities and cruising lives; there are two sex scenes (sort of) in France, which Reybaud helpfully clocks as totaling 4:40 in this press kit interview, and he has little of Guiraudie’s anything-goes bawdiness or conspicuous chaos. (NB: Stranger by the Lake, Guiraudie’s best-known film here, is also his most anomalously sober-minded.) What Reybaud’s shooting for is closer in spirit to the lower-key likes of Martín Rejtman’s films — in which intersections between strangers redirect the film from one character to another, following tangents that build to no rising arc — or Kleber Mendonça Filho’s capacious Neighboring Sounds and Aquarius, which regularly break for anything of interest regardless of whether it advances the central narrative. Both Pierre and Paul meet a lot of people, and those strangers’ lives do continue: at certain, seemingly random moments, we cut back to mundane moments of these left-behind strangers dealing with their mail, taking out the trash or otherwise continuing on with their unexciting lives. The cumulative effect is a movie that seems initially extremely low-key but enfolds a great deal of anecdotal incident into a sneakily ambitious package.

Lina Rodriguez’s sophomore feature This Time Tomorrow (I haven’t seen her first, Señoritas) is a super-solid piece of slow cinema, its first shot staking out the territory quite clearly: a static shot of trees, the light slowly rising. With full “gentle observation” mode in effect, Rodriguez enters a domestic space in Bogota, occupied by a family unit of three: father Francisco (Francisco Zaldua), mother Lena (Maruia Shelton), teenage daughter Adelaida (Laura Osma). The first third is a low-key family saga, with non-programtically alternating scenes of daily harmony — group TV-watching, breakfast preparation — and turmoil, largely precipitated by Adelaida, who has her predictably bratty spells and doesn’t want to always let her parents know where she’s gone at night. Despite the ups and downs, nothing seems awry. Then it’s Lena’s birthday, and the screen slowly fades to black…

I won’t say what happens next, though you can probably guess right off the bat. What’s interesting about Tomorrow is how flawlessly it simulates the illusion of documentary: this is Zaldua’s first credit (at least per IMDB), but Shelton and Osma are both actors with a few high-profile credits under their belts, none of which you know or perceive off the bat. I was startled to find out, come film’s end, that I hadn’t been watching yet another hybrid; the illusion of watching a family that’s agreed to offer themselves for extended observation even at the most painful moments is flawlessly sustained throughout. Rodriguez breaks the family unit down into visual units of one, two and three: parents at their separate jobs, together on their own, one on one with their daughter, or all together. Though it ventures outside, Tomorrow is as firmly rooted in a carefully demarcated domestic space as France is perpetually itinerant, and it’s utterly convincing in its constructed observations.