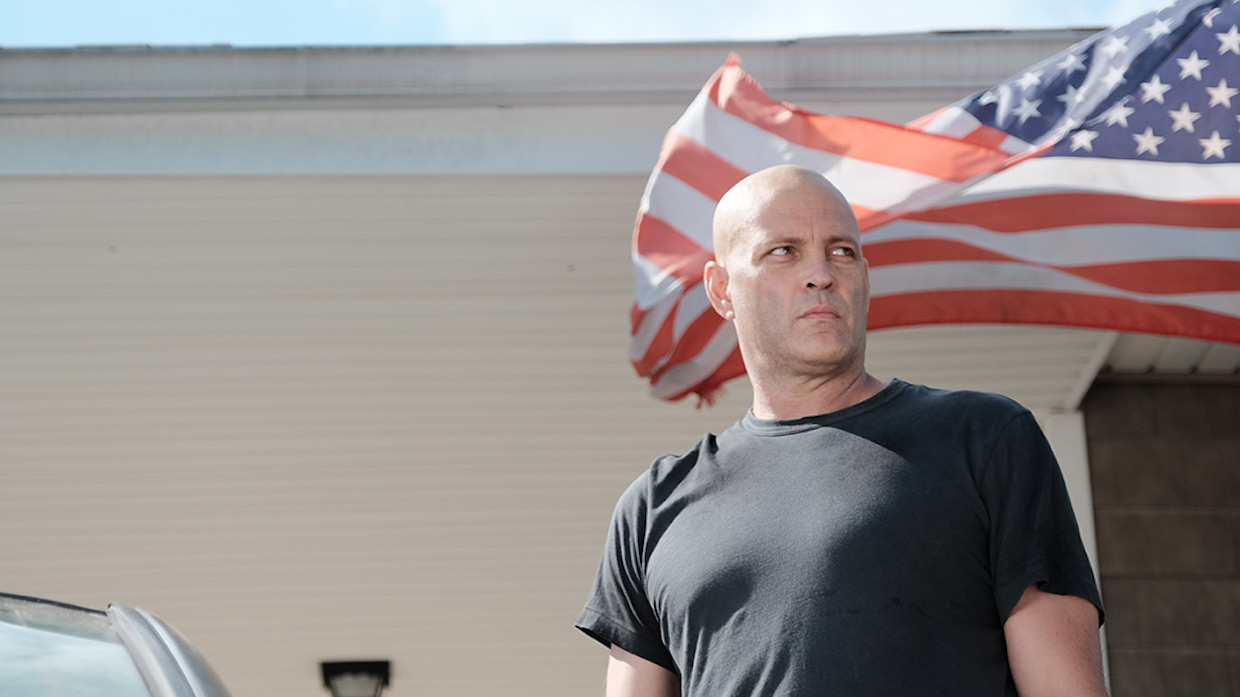 S. Craig Zahler’s Brawl in Cell Block 99 replicates the structural mutations of his first film, Bone Tomahawk, at first a realistic Western that expands into a gorefest with inflections of Mad Max. Likewise, Brawl begins as a fairly low-key thriller (minus the part in which Vince Vaughn dismantles nearly half a car with his bare hands) that continuously ratchets up the bloodiness in uncreasingly unreal settings. Zahler’s definitely a gore enthusiast, which isn’t really my thing: it doesn’t particularly bother me, but I’d just as soon not deal with it. But, like Jeremy Saulnier, gore enables what I’ve liked about his work: Tomahawk relished the opportunity to play with elaborate 19th-century American vernacular syntax and idioms, and the criminals of Brawl are inventively terse Chandler holdovers who routinely play with language. A prologue has Bradley Thomas (Vince Vaughn) being fired from his tow-truck driver job. A co-worker asks if he’s OK: “I’m south of OK and north of cancer.” Brawl is lighter on overall dialogue than Tomahawk, but what’s there is still a pleasure to process.

As in Tomahawk, one ill-conceived inciting poor decision leads to a series of increasingly bad problems that have to be dealt with: in that film, by a “rescue party” with unavoidable Manifest Destiny overtones, here by the massive, seemingly implacable Thomas. Post-firing, his stint as a drug courier leads to a pickup gone wrong and minimum-security prison. First complication: one of the kingpins in that deal wants Thomas to kill a man housed in a maximum security facility, kidnapping Thomas’s pregnant wife as leverage. Getting transferred there means deliberately starting confrontations with the guards, every (of necessity, violent) such incident leading to further and more sadistic challenges. Steadily held master shots confirm that Vaughn appears to be doing pretty much all of his combat, and he’s completely credible (and, at this point, way more interestingly imposing) when delivering scripted line readings rather than rewriting parts in his familiar comic voice. The film’s politics are completely unparsable: the film seems to be anti-mandatory minimums but also concerned with crystal meth opioids (which, to be fair, is reasonable). The film is set in upstate New York, and surely someone will try to suggest that Vaughn is Trump’s oft-cited “forgotten man.” The film’s delight in its face-crushing makes any over-serious considerations pretty unproductive-seeming: the unrepentantly pulpy throw-downs, in keeping with the unpretentious promise of its title, do not seem particularly interested in the demographic politics of those involved. As with Tomahawk, the film looks absolutely hideous: super-digital, with lots of interiors bathed in sick greens and grays. Please get this man a great color correction package for his next feature.

Blake Williams is a friend and sometime contributor to this publication, which doesn’t make much difference as to my enthusiastically recommending his first feature Prototype (which screens again one last time tomorrow night — go if you’re here!). I don’t have a totally fleshed-out interpretive framework to offer, but briefly: beginning with stereoscopic photos taken following the 1900 hurricane that hit Galveston, Prototype launches into a sustained section in which a vast sea of waves stretch out towards a very far-off point; this image slowly dissolves into and is overlaid with other waves placed at different positions — left, right, down — of the square frame, creating the impression of a sustained square of water whose boundaries are always shifting. (I hate to put it like this, but it takes the awe-inspired logic of how James Cameron fetishistically films oceans and water to a whole new level.) The remainder of the film is mostly taken up by a series of images generated in part via an old Philco TV monitor. These monitors are placed three or four deep in an ambiguous, semi-Lynchian black nonspace/room of sorts; these opaque screens then turn from silhouettes to receiving their own close ups as rhyming “waves” roll down the still blank screens.

Once moving images enter the equation, their depth layers are separated as the “camera,” or whatever the final apparatus that creates the POV is, peers at parts of each monitor from much less distance. The stereoscopic depth during the waves sequence goes back extremely far in one unified space; afterwards, there’s three or four images layered at great distances from each other, cumulatively going very far back. Alternately, sometimes there’s just two different isolated parts of an image, flat and compressed next to each other. This repeated expansion and compression of different levels of depth and layering may have an organizing logic I haven’t grasped yet; at his first Q&A, Blake noted that the film had the effect of pulling viewers in and out throughout this section, without viewers necessarily agreeing on which parts were easier to pay sustained attention to. It’s pretty continuously stunning, minus whatever push/pull I felt as a viewer, and the outstandingly layered soundtrack performs a slow upwards and downwards rumble to provide a sort of emotional/narrative spine.