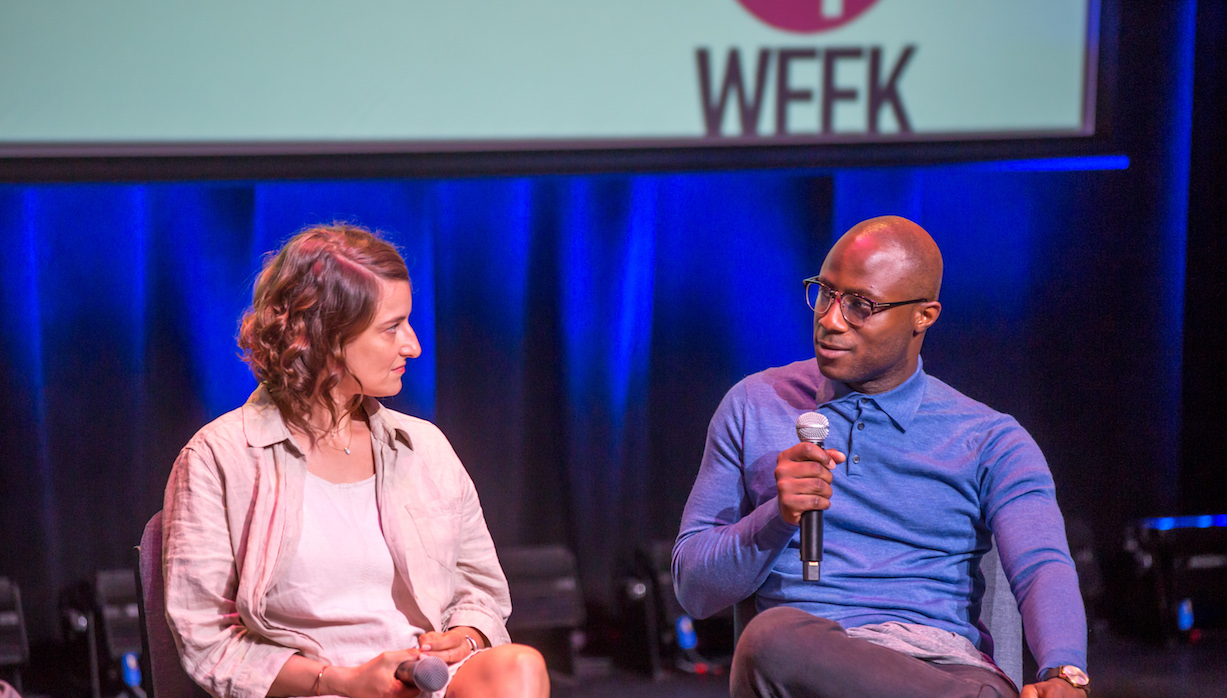 Barry Jenkins and Adele Romanski know what IFP Week is like. They know what it’s like to pitch a passion project. They even know what it’s like when time — in Jenkin’s case, several years — elapses between features. When the writer/director and producer, respectively, of Moonlight swung by this year’s Filmmaker Talks day at IFP Week, it was a kind of victory lap. After all, their last film together took home three Oscars, including Best Picture, on top of a towering pile of other accolades. But they used their talk with moderator Scott Macaulay, Filmmaker‘s Editor-in-Chief, to remember when life was still a struggle.

“We did not have financing for Moonlight when we came to IFP Week,” Jenkins said. “I didn’t learn how to get financing coming out of IFP Week. But I learned a lot about what I was saying that was making the film unfinanceable. I wasn’t describing the film in a way that would be much more useful: ‘This is how I’m going to make it, this is what it’s going to look like, this is what it’s going to sound like.’ I just wasn’t doing those things. We left here and really refined what it was that we were going to do to make the project.” Summarizing his advice to Film Week filmmakers entering this week’s Project Forum, he said, ““If you’re selling a pitch, that’s usually a bad sign, whereas if you’re presenting, projecting, translating what’s awesome about you and how that connects with the piece you’re pitching, that’s the way to go.”

Before we proceed, let’s jump further back in time, to soon after 2008. Jenkins had just made Medicine for Melancholy. It was acclaimed, a festival hit, and did modest business at the box office. And yet it took another eight years for Jenkins to follow it up with Moonlight. In the interim, he wasn’t doing nothing. He still talks about the movie he wanted to make next, a “Stevie Wonder time travel movie” set up at Focus Features. But that stalled, as did other projects.

“My real career move was to use the speed I got off Medicine to infiltrate Hollywood,” Jenkins said about his plan at the time. “My Plan B was to do these short films or commercials to pay the bills. And the Plan B ultimately became the plan,” Jenkins remembered. “I kind of stopped writing at that point. I wasn’t writing any personal films. Those things were too small [because] ‘I gotta make the Stevie Wonder time travel movie!’ I also unwisely wasn’t trying to get hired as a writer of other things, which is what Damien Chazelle did in between Guy and Madeleine [on a Park Bench, his debut] and Whiplash. I wasn’t wise. I wasn’t wise at all.”

Jenkins wound up with a year-long Cinereach fellowship, which he describes as “filmmaker therapy.” “They chose me and three other filmmakers, and we would come in once a month, and we would just sit on a couch and pour our hearts out,” he recalls. He also spent a few years running his own small commercial production company, Strike Anywhere. It was work that paid the bills but didn’t give him the time to develop the kinds of personal films that drove him into the business in the first place.

It took Romanski — whose other producing credits include The Myth of the American Sleepover, Morris from America and the TV version of The Girlfriend Experience — to wake him up. Coming off a particularly difficult production experience, she decided to push forward a film by her long-time friend. “Adele called me up and said, basically, ‘Why are you being such a dumbass?’ And that started the process,” Jenkins says. She would check in with Jenkins every week over Skype, and together they slowly narrowed down all the projects he wanted to do to the ones that could actually happen. Eventually they wound up with two: Moonlight and an adaptation of James Baldwin’s novel If Beale Street Could Talk, which they’re set to start shooting next month.

“I got up off the couch, and then Moonlight won Best Picture, which is kind of insane,” Jenkins says, still shocked.

Not that Jenkins thinks he’d do it differently given a chance to go back. “One of my favorite Arcade Fire songs is ‘The Suburbs (Continued),’ and the lyric is, ‘If I could have it back, all the time we wasted, I’d only waste it again.’ I think probably what I would do is waste it again,” Jenkins admitted.

Rather than going it alone, both Jenkins and Romanski stressed the importance of working together.

“I can’t emphasize enough the importance of having someone in your corner who you trust,” Romanski said. That goes double after you’ve had a success like Moonlight. “I’m very cynical. I don’t trust a lot of people. There are a lot of people who want to be your friend when things are good. It’s about seeing who’s still around and who wants to be your friend when, god forbid, you fall on your face and have to get back up.”

Moonlight was the first film made by Pastel, the production house Jenkins and Romanski started with Sara Murphy and Mark Ceryak. They envision it as a home for other filmmakers who want to make personal work; their second production — Gemini, by another longtime indie workhorse, Aaron Katz — is due in theaters this fall. It also means avoiding the big Hollywood tentpole behemoths, which Jenkins and Romanski aren’t being offered anyway. (Says Jenkins: “On Twitter, people will say, ‘Oh, Star Wars is open, get Barry Jenkins!’ I’m like, ‘What?’ I’m not getting those calls.”) If they did get those offers, they’d want to do it their way.

“I don’t know if it’s possible to do something for money, in a weird way,” said Romanski. “I never produced commercials, even if I was told, over and over again, that that’s the best side-hustle I could get into to support the indie film habit. I could never do it because the job is so damn hard — to get up every day and make yourself do what we do for 12 or 14 hours, to build the thing and see it through completion. If you don’t love it, good luck.”

Jenkins doesn’t miss the old days. “Pitching sucks. I don’t care who you are. You could be a white blue-blood dude from Harvard or Dartmouth — pitching sucks,” Jenkins said. Recently Jenkins pitched an adaptation of Colson Whitehead’s book The Underground Railroad to Amazon. He wound up talking for three straight hours. “I go in there thinking, ‘This thing is expensive, I have to sell it.’ Thankfully, because I love what I do, after 20 minutes I went into a fugue state. It was crazy. Three hours later, the Amazon dude was like, ‘Do you want some water?’” Jenkins recalled. But he can still get stressed. “Even with an Oscar behind me, I still feel all those things you’re thinking about. They’re all in my head, because of where I’m from and who I am. They’re always going to be there. But once I slip into the love of what I’m doing, that shit disappears.”