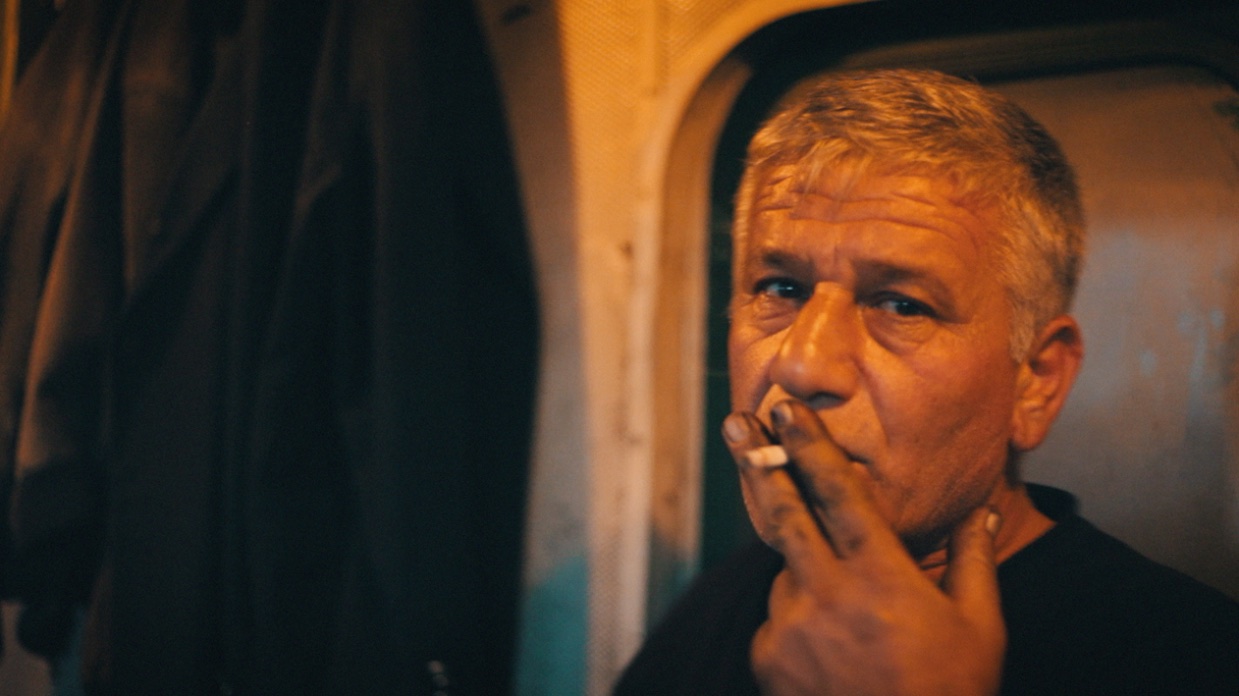 All That Passes By Through a Window That Doesn't Open

When I arrived at CIFF in 2012, I was attending the Points North Forum Pitch, which runs concurrently with the festival and is the centerpiece of a weekend of panels and discussions. I came to Maine from Los Angeles, a first-time director who somehow couldn’t get the last four union days to join Local 728 and thus decided that shooting my own film would be a perfect antidote to hearing my buddies brag about the shows they worked on — shows that, finally, their friends had heard of. I perfectly remember the anxiety I felt when I arrived. Everyone knew each other, nobody stood alone at the receptions, and people looked like they cringed when I told them the name of my film, then known as [withheld to shield myself from embarrassment], which should have won an award for worst title. It’s a difficult thing to arrive onto a scene you desperately want to be a part of.

But it was shortlived, for the pitch trainers immediately hacked away at the bullshit in my presentation, and while there was a light push to highlight (invent) my film’s character arc (of which there is none), the experts were incredibly helpful in getting me to distill my ideas into a tangible project people could understand, even if it provoked confusion and “not for us” replies from a few on the panel. People ask me now, “Did you get funding from the pitch?” and I can reply that yes, indirectly I did. I didn’t walk away with cash or a deal, but I did become a blip on someone’s radar, and that began this entire journey.

So I arrived in Maine five years later to make my US premiere, and I stepped into a shuttle that I shared with two people I knew were on the pitching panel this year, panelists that I actually pitched in 2012. Of course they don’t remember me, which I blame on my hair loss, and that’s fine. I remembered the advice of the esteemed Boris Mitić (In Praise of Nothing): “When you share that shuttle with the broadcasters, don’t talk at all, create the air of mystery and desire to learn about you and your film.” He also advised me to wear memorable or ostentatious clothing, “because you look exactly like 10 other filmmakers.” I don’t take Boris’ advice on either, because I bring chocolate to share instead.

This is a beautiful town, where a lot and not much has changed…. I walk around town and immediately I recognize faces of people I’ve never met. I collect documentary filmmakers in my head like baseball cards, and finally this weekend I have the confidence to talk to them, and the opportunity to meet new people I’m intimidated by. This is the festival life, making a new family of friends and confidantes, as well as realizing that the people you’re scared to talk to have the same anxieties you do, just not about you.

I ended up checking the box on a good many filmmakers I had sought to meet, and they’re lovely people. Yet I left terrible unfulfilled in one of my goals, to find the mercurial director Tala Hadid, rumored to attend. I ask everyone around and am told she is “very easy to spot, she’s the most elegant filmmaker here,” but to no avail. I have now searched for her at two festivals in two different countries without result, which is a pity because all I want to do is shower her with praise for her magical film without parallel, House in the Fields. Instead I find the Austrian duo behind Sand und Blut, Angelika Spangel and Matthias Krepp, who are visiting CIFF for the first time, providing the commentary that Americans are too genteel in their criticism of films. This duo is a force, and I’m glad they had a good reception at the Farnsworth Museum venue, which housed not just their film but other fantastic films.

Unfortunately, the festival is (blessed) plagued by too many good films, forcing you to make a Sophie’s Choice not just everyday but at every time bracket. I hope CIFF doesn’t expand toward the gluttony of other doc festivals, but I hope that the films shown here will be able to reach other cities, other audiences throughout the year. But usually, I really like to go see the films that will never get bought by anyone. How else and where else do you discover the brilliance of directors like Jessica Oreck (who brought Aatsinki to CIFF in 2012)?

Chief among these films, and I hope somebody picks this film up for US distribution, is the sonic mindfuck Taste of Cement by Ziad Khaltoum. Can someone influential please get this man a visa to visit the US to present this spectacular film? Because it’s time we have a Syrian presenting Syrian films. Rawane Nassif’s short Turtles Are Always Home preceeded Cement, a deft programming touch to highlight the transience of home with these two magical films.

I loved the “What Do Cameras Do” panel, the highlight of which was director Travis Wilkerson (Did You Ever Wonder Who Fired The Gun?) schooling me (deservedly) on my ignorance. We both attended a festival this year, and while I was consumed by the health benefits of Dunja and Opatija, I was blind to the courageous and progressive programming in the face of tension that could obliterate not just a film festival but a society (again). As the panel was about to begin, Wilkerson didn’t have time to expand, but I completely tuned out of the panel and kept thinking about how we as filmmakers just parachute into these towns, without any knowledge of local customs, cultures, or the realities faced by the volunteers and staff who live in this place we’re passing through like a circus.

I sat in on another panel, “Encountering Documentary Sound” with Ernst Karel, who held court in a steady voice and with audio clips of his recordings… and he coins a new term, the “Director of Phonography” to use as a ruse in your development budget as a “2nd DP” — because of course nobody would approve development money for sound design, whereas camera tests and color grading for pitch trailers are so easily acceptable as line items in development. I walked away reflected on my own experience doing sound design and how transformative it was. I got lunch alone and walked around a bit, prepping myself for my film’s screening, which was housed in the same venue as my pitch in 2012. It was an emotional affair to first see the queue, then the audience fill into the theater, then to stare up at the same stage I walked up on to pitch. I made it home… and the film begins. You can tell when an audience didn’t expect subtitles. There is a warm sound to me, one of comfort, when the first subtitles appear in a film, and I hear the collective sound of human bodies adjusting to sit upright, their stiff bodies having settled in for something else.  This experience, as well as the entire weekend, was best described in one word to me by the reigning Queen of Karaoke, Leah Giblin, and original champion for my film at Cinereach: “communion.”

And then, the main event, the Points North Forum Pitch, which fills the Opera House and has the air of a wrestling match. The projects were all very impressive, but I will only highlight one moment, when Todd Chandler’s pitch for Untitled was criticized for a perceived “lack of story,” to which Tabitha Jackson, Director of Sundance’s Documentary Film Program, rose to decry the “hegemony of story” in the documentary, and the crowd erupted in applause and hollers of supporters. There are many festivals whose programming can starve storyphobes, and I hope that CIFF not only continues to provide a home to these films, but also continues to support the conversation brought forth by Chandler’s pitch.

On Sunday morning, I share an airport shuttle with other filmmakers, funders, and one guy I heard is press but never met. Some are buried in their phones, some have succumbed to sleeplessness and have passed out with coffee perilously still in hand. As I watch the coffee dripping onto the seat with each turn of the vehicle, as I reflect upon the immense difficulty and satisfaction that goes into starting and finishing a film, I keep returning to the words of the wisest person I met that weekend: a three-year-old polyglot with brilliant filmmaking parents and serious toddler-sized dancing shoes.

We met in a parking lot, waiting to be shuttled to the night’s festivities, where perhaps because we both tired of talking to the adults, perhaps inspired by the sea air, we spontaneously decided to walk like crabs, parading around, our fingers/claws pinching the air in celebration. The next day I saw her again, and I asked if she remembered our crab walk.

“That was so fun!” I replied, and made mimicked claws with my hands.

“But today I’m not a crab. I’m a ballerina,” pointing to her skirt (and the smallest Jordans I’ve ever seen).

“No,” she said, and just before bounding off and disappearing behind the mingling adults, she giggled and said, “You’re nothing”.

Burned by a toddler! But she’s right. The film is finished, the premieres are behind me, and I leave this festival essentially how I arrived in 2012: a nobody with a huge hill to climb to make their first next film, and I’m so grateful to have been here.

Martin DiCicco is a director and cinematographer whose first feature, All That Passes By Through a Window That Doesn’t Open won the Regard Neuf award for new filmmakers at Visions du Réel and the Cinematic Vision award at the Camden International Film Festival.