“Gain the Trust of the Audience”: Cenk Uygur Talks Trump, News and the Internet at IFP Week 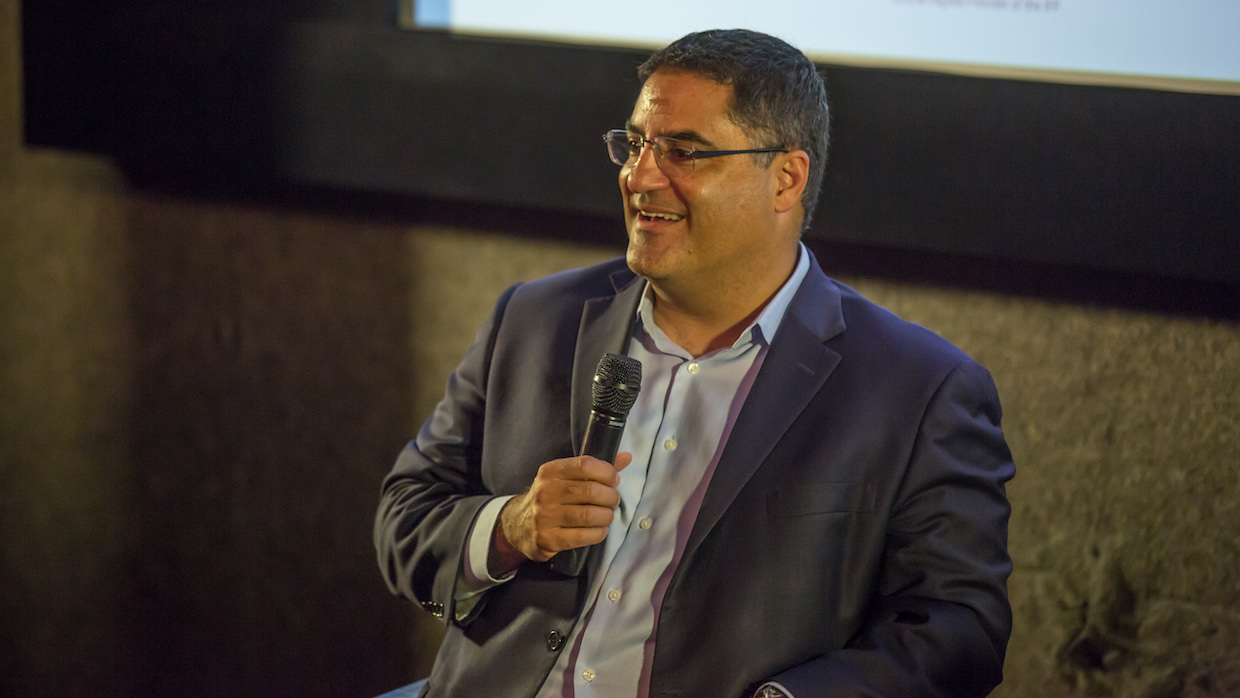 Cenk Uygur isn’t happy Trump got elected, but he is fine with stealing parts of his playbook. Not the bad moves — just the ones that are, arguably, good. As the main host and co-creator of The Young Turks, a progressive show which began on Sirius and now lives online, Uygur is after the same slice of the populist pie as the president he so despises. Cenk Uygur isn’t a household name, but perhaps he should be. He is, literally, internet-famous. The Young Turks gets 200 million views a month, meaning he has more fans than a Wolf Blitzer or a Joe Scarborough.

In other words, Uygur is using both new media and the populist revolution unleashed by the Orange Menace to hoover up an unprecedented amount of followers. Uygur swung by IFP Week 2017 for a talk moderated by New York Times Media Columnist Jim Rutenberg about the unusual niche he’s carved out in the media landscape. Throughout the hour, he exhibited the kinds of traits we’ve come to abhor in our newish POTUS: He bragged about his numbers, he talked smack about his competition, he actually used the words “I tell it like it is.” He’s like a blowhard, but for the left.

In fact, Uygur isn’t entirely against the way our 45th president has detonated the system.

“There are lots of things to learn from the ascent of Donald Trump,” Uygur told the audience. First up for schooling is politicians, including whoever nabs the Democratic ticket in 2017. It helps to be untethered from donors, which Trump was because “he couldn’t raise money,” as Uygur put it. “His incompetence, ironically, led to a huge advantage for him. Since he didn’t have to suck up to donors, he could actually just try to get voters.”

That’s one reason, Uygur surmised, that he kept making crazy, obviously false, promises. “He said he was going to raise taxes on Wall Street. That was a total lie, and everyone who knew Trump at the time knew that was a gargantuan lie,” Uygur explained. “He said he’d drain the swamp. Rubio couldn’t say it, Bush couldn’t say it, Clinton couldn’t say it, because they were tethered to the swamp. So that’s why Trump won. There’s a lesson to learn there, which is that if you’re trying to appeal to voters, or in our case an audience, you’re going to win. You just have to get untethered first.”

Then there’s political commentators like Uygur, or anyone working in our rapidly changing media landscape. Uygur thinks they should take notes too. Much as Trump won (the electoral college, at least) by selling himself as a new kind of politician, Uygur has positioned himself as a new kind of journalist. The Young Turks doesn’t live in your cable box. It’s not beholden to advertisers, because the show is fueled, in part, by subscribers. Uygur describes it as “the HBO of news”

“If you love those shows, you’re willing to pay 15 bucks,” he said. “If you love our show, you pay ten bucks a month, and you get to support independent media.” (You can still watch The Young Turks when it’s live on YouTube or Facebook, but to watch it when it isn’t — to download it and view it whenever you like, on whatever platform you want, plus get a host of extras, like extra shows — you have to fork over some dough.)

Though he admitted the subscription approach doesn’t completely fill the show’s financial needs (yet), Uygur said the numbers reveal that he might be bigger than no less a scourge as Rush Limbaugh.

“Two hundred million a month is an amazing number,” Uygur said. “Take our conservative numbers and compare it to Rush Limbaugh’s inflated, unproven numbers. Rush goes, ‘I have 15 million listeners, and no one’s ever checked. Ours are on comScore and Google; you can verify it to the hilt. We’re four times larger than him. Do we get four times the media coverage he gets?”

He doesn’t, which is partly why Uygur’s no Sean Hannity, at least in terms of recognition. As it happens, when he was starting out, Uygur replaced Hannity after he left his radio show in Huntsville, Indiana. Back then, Uygur was a Republican — or, as he specifies, a “liberal-to-moderate Republican.”

“On some issues, I was conservative. I believed in balanced budgets. Turns out Republican never balance budgets. Who was the last Republican to leave office with a balanced budget? Dwight Eisenhower. That’s not what they do; it’s just a marketing gimmick,” Uygur recalled. Even after switching teams and wielding the progressive torch, the young Uygur was a lot like the current Uygur. “I’ve always been loose and not practiced. I think that’s why the audience connects with me. But a lot of the program directors didn’t. They sniffed out that I wasn’t a real conservative. You know how they did it? They asked me, ‘What gun do you have?’ I said, ‘I don’t have a gun.’”

On paper, much of Uygur’s early career reads like a typical big-time journo’s CV. After The Young Turks became a hit on Sirius Radio, he was hired by MSNBC during the Obama years. But he clashed with his superiors, who didn’t like that he was critical of a popular president that he felt wasn’t living up to his progressive promises. When his superiors tried to switch him to a weekend slot, Uygur bailed for Al Gore’s now-defunct channel Current. When that station collapsed in 2013, Uygur took to the world wide web.

Nowadays, Uygur sees himself in battle with his former employers and what he perceives as an old school, increasingly irrelevant approach to news. The Young Turks is the number one show on internet content hub Pluto TV — and not just the number one news show. Going online, Uygur implied, is how to reach audiences in an age when trust in old systems, be they governmental or journalistic or otherwise, is fast eroding. More and more people are cutting the cord, unsubscribing from cable packages, which dooms channels like CNN, MSNBC and, presumably, Fox News too.

“They’re on borrowed time. They’re losing subscribers so quick it will make your head spin. It made their head spin,” Uygur said. “CNN has lost 12 million subscribers in the last 12 months. They’re bleeding out. They’re just the tip of the spear, because they had the most subscribers. Then they’re going to have to come to Skinny Bundles,” the name for a la carte television, “where we are now. And then we’re going to be head-to-head — and they’re going to be screwed.”

As ever, Uygur doesn’t mince words. He calls most mainstream news reporters “news actors,” who do little but read from the prompter. He refers to Wolf Blitzer (and not unfairly) as a “robot.”

“Right or wrong — and people have legitimate differences of opinion on this — passionate beats dispassionate. We are passionate, they are dispassionate,” Uygur said of the likes of CNN. “They would argue there’s a good reason for that; I would argue they actually have business reasons for that. But we can’t wait to go neck to neck with CNN and MSNBC, because we’re really going to clean their clocks.”

Uygur’s boasts are constant, but they’re not empty. Unlike Trump, he’s honest about why he’s made such an impact — and those reasons don’t make you want to run screaming for the hills (unless, that is, you’re a print journalist). He talked a lot about the importance of gaining the trust of the audience, even those who disagree with you.

“People love to hate-watch us. We are reaching a lot of conservatives,” Uygur said. “But in the midst of their hate-watching, you know what happens? From time to time, there’ll be a comment that says, ‘Wait, I thought [Uygur] was wrong, but he made a good point.’ I’ve had dozens of people come up to me on the street and say, ‘You set me free, man. I used to be conservative, I used to be Evangelical Christian, I was pretending to be straight because I thought my parents were going to hate me.’ We are reaching people and they are changing their minds.”

It could be argued this is optimistic, maybe naive; flip-flop anecdotes such as these are always in the dozens, not thousands. But Uygur has another reason to be hopeful about our future. Those actual fake news sites eating up space on Facebook, deluding the gullible, spreading misinformation? They can’t last long. They’ll always need to be replaced by others.

“Once people, even if they’re conservative, realize that you’re fake, they don’t come back to you,” Uygur said. “At the end of the day, in order to be that island, in order to be that continent in the middle of the ocean, you have to earn that trust. There will be smaller players who constantly attack — trolls and bots and fake news sites. That’s part of our reality now. But the ones that survive and the ones that thrive gain the trust of the audience. Which is a very hard thing to do over a long period of time. I think we can rebuild on that.”