Critic’s Notebook NYFF: Call Me By Your Name, The Square, Western, Wonderstruck, Joan Didion: The Center Will Not Hold 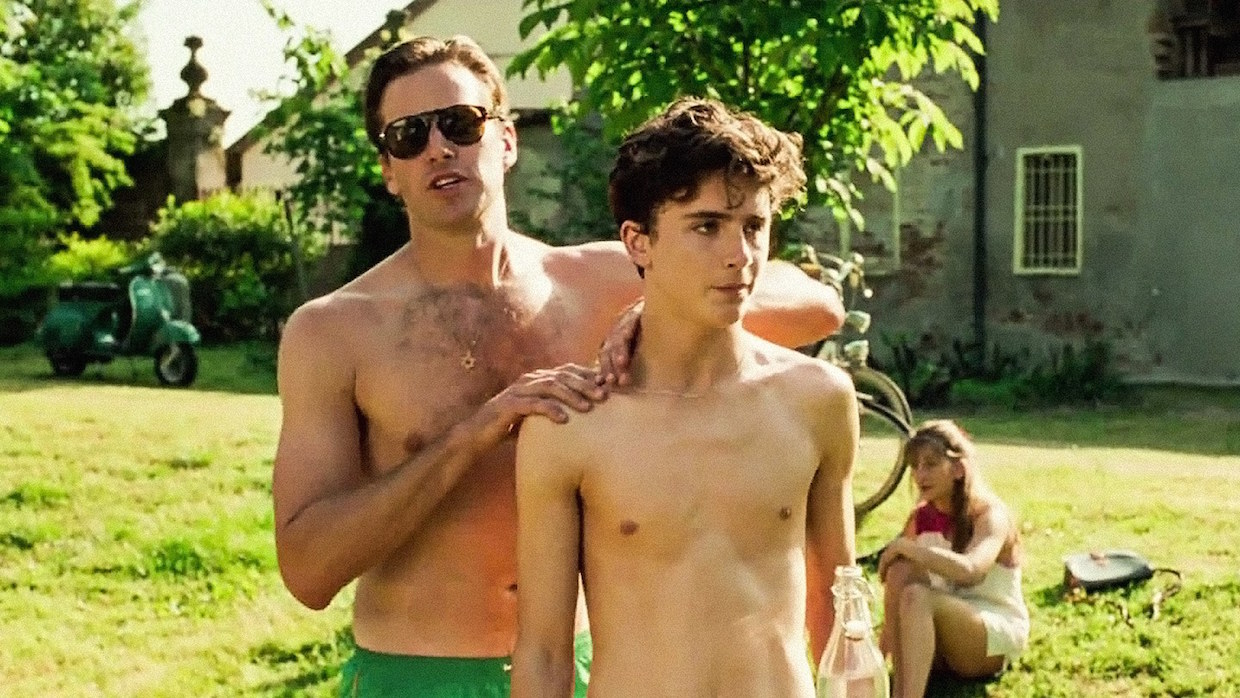 Armie Hammer and Timothée Chalamet in Call Me By Your Name

For film writers who, like myself, remain chained to New York, NYFF marks the time of year when the much-hyped (or -hated) titles from the festival circuit finally pay us a visit. NYFF represents the last stop for many of the reliable sampler of films from Sundance, Berlin, Cannes, and elsewhere before they enter theaters and launch their awards season runs. At last, we get to see the films the more important writers have already grown tired of debating on Twitter.

From Sundance this year comes Luca Guadagnino’s Call Me By Your Name, a coming-of-age queer romance set in 1980s Italy. A summer romance to the bone, the film charts the slow-burning bond between a nervy teenage boy (Timothée Chalamet) and an older graduate student (Armie Hammer) on a research sojourn. Chalamet spends much of the film at war with his own desires and in awe of Hammer’s blunt physicality. Hammer doesn’t sip his morning juice like a polite houseguest; he gulps with lusty pleasure. The two circle one another as the summer days stretch. Much remains unspoken as they dine in apricot orchards, go for afternoon swims and aimlessly flirt with other locals.

By design, Call Me By Your Name starts a bit chilly before it turns into an emotionally luxuriant wallop. The film resurrected my own memories of teenage love: the psychopathic crushes, the violent overnight rushes (to paraphrase Lorde). “We wasted so many days,” Chalamet says at one point, a line I recall having said verbatim to my first love in the summer of 2001. There’s never enough time in those days, and there’s far too many other people around. Guadagnino captures the powderkeg intensity of those moments, when most of us have yet to learn how to tame our hearts and lead lives of functional, mid-range misery. We didn’t sip back then; we gulped. A gorgeous evocation of youth, both sensitive and sensual, Call Me By Your Name is a knock-you-on-your-ass reminder of how our hearts used to behave. Stay for the end credits.

As usual, NYFF marked the US premieres of several films that debuted at Cannes in May. Among this year’s haul is The Square, Ruben Östlund’s Palme d’Or-winning provocation from Sweden. Östlund here brings his formal exactitude and sadistic humor down on Christian (Claes Bang), the head curator at a modern art museum in Stockholm. Over a loopy 144 minutes, Christian labors over the opening of a new installation, struggles to retrieve his cellphone and wallet after a first-class mugging, offends an American journalist (Elisabeth Moss) and in general manages to step in it whenever he can. It’d lessen the blunt-force absurdity of these various plot threads to say more.

At the press screening I attended, Östlund cited the infamously nasty subway scene from Michael Haneke’s Code Unknown as a formative scene for him as a filmmaker. Indeed, I wouldn’t hesitate to elevator-pitch Östlund as “Michael Haneke but funny.” Here, he invites particular comparisons to Caché, another film about an affluent public intellectual who becomes ensnared in a drama he very much wants to avoid with a poorer family. Issues of class and social conventions permeate The Square as they did his previous film, 2014’s Force Majeure.

Östlund has a troll’s impulse to provoke and prod. Many will find his antics here juvenile (if not offensive), but when paired with his visual precision and knack for cringe comedy, I find them tough to resist. He has a rigorous control over what we see and hear; the use of off-screen sound evokes much of the anxiety during his outrageous set pieces. Consider how much more unsettling it is that we can’t see the man with Tourette’s syndrome who shouts obscenities, or the face of the kid who bangs on Christian’s car window, or the chair sculpture that rattles inside the museum. Östlund may feed on our discomfort, but he elicits it through cinematic craft, not just mere button-pushing. The Square finds savage humor in how our most prized moral beliefs play out in the real world.

Another Cannes premiere, Western is the first film in 11 years from German writer/director Valeska Grisebach (Longing). The story here unfolds in rural Bulgaria, where a group of German construction workers arrive to build a new hydroelectric plant near a small village. “I’m here to earn money,” says lead Meinhard (Meinhard Neumann) early in the film, unwavering in his sense of purpose. The construction project stalls, and the workers – all white men – find themselves with energy to burn. Some get hammered, some drive around the village shouting vile taunts like “We’re back! Only took us 70 years.” Despite the language barrier, Meinhard ingratiates himself with the community while his coworkers treat them as an inconvenience at best. Western depicts Meinhard’s dilemma – a classic “going native” story told with such uncommon subtlety that it feels reductive to pin it with that label.

Grisebach’s film builds on the colonialist themes seen in last year’s Toni Erdmann (Maren Ade is a producer here). Just as that film probed Germany’s modern-day relationship to Romania, Western explores Germany’s economic ties to Bulgaria. Here we find a new form of globalization: Western Europe’s colonization of Eastern Europe. Grisebach paints her Germans as non-violent occupiers; they parachute into the region and assume they know what’s best for the villagers. She wisely relegates most of this to subtext. Moment to moment, Western plays less like economic allegory and more as the story of a stoic man unsure of his place in the world. Her film draws on well-established genres – the western, the “going native” narrative – to engage with a geopolitical dynamic that many viewers have likely never considered. Late in the film, a Bulgarian local asks Meinhard “What are you searching for here?” He no longer has an answer. Western ends with an allusion to the final scene of Beau Travail, but where Claire Denis offered cathartic release on the dance floor, Grisebach gives us no such closure. Her lead doesn’t get to take center stage in a foreign land.

Another Cannes premiere to join the Main Slate at NYFF, Wonderstruck is a singular creation from Todd Haynes and Brian Selznick: an avant-garde children’s film. The film hops between 1927 and 1977 to follow Rose and Ben, two deaf children on missions to find family members in New York. Their journeys lead them both to the Natural History Museum, where they find allies in a city that seems indifferent to them. Haynes, no surprise, relishes in the period settings. He shoots Rose’s portion as a black and white silent film and Ben’s as a slice of ’70s American cinema, replete with shallow-focus images of pedestrians in motion. Elsewhere Haynes delights in stop-motion sequences, psychedelic swirls of light, and other flourishes to conjure his two iterations of New York.

If it weren’t clear, Wonderstruck is something of a science experiment in film form. Haynes cross-pollinates two eras of filmmaking and, to mimic the experience of his two leads, tells the story with little dialogue. The film thus lives on its wordless rhythms as it shifts between registers. It’s an ambitious experiment, but for a story that strives for emotional transcendence Haynes’s cinephile approach distances rather than draws us in. Too often, the film devolves into a tedious exercise in craft, as if Haynes received a number of aesthetic prompts (à la The Five Obstructions) and worked backwards to build a story. When Ben strolls through a meticulously art directed Manhattan set to Esther Phillips’s “All the Way Down,” what we see is a “1970s montage” right down to the quotation marks. Of course any film made by Haynes and his frequent collaborators will have plenty to admire. Here we have Ed Lachman’s 35mm cinematography, Carter Burwell’s score, Julianne Moore’s dual performance. For those who prefer Haynes when he tempers his cerebral instincts, however, Wonderstruck feels more like a graduate seminar than a film about youth.

I’ll round out my final NYFF dispatch with Joan Didion: The Center Will Not Hold, a Netflix-produced doc that will arrive on the streaming service on October 27. The film is the first documentary from Griffin Dunne, a veteran actor (An American Werewolf in London), occasional director and, significantly, Didion’s nephew. Dunne’s closeness with Didion affords him great access, even if it does steer the film toward a straightforward hagiography of his aunt.

The Center Will Not Hold runs through Didion’s entire oeuvre, from her days as a literary journalist to her tragic late-period memoirs. It’s a pleasure to see Didion’s mind at work in these interviews. She remains sharp at 80 years old, even as her nerves cause her to fidget and twitch as she speaks. The film serves as an efficient primer to Didion’s work: we get a taste of Didion as cultural critic, novelist, screenwriter, playwright. It also captures Didion’s personal traumas in the 2000s with a delicate touch that never feels exploitative.

When I recall The Center Will Not Hold, I think of a single image: Didion and Dunne snug on a couch going through photographs. Dunne relays a story from his childhood as an almighty smile beams through Didion’s often severe face. She seems thrilled to remember this moment, excavated from her past. Given his unique access to Didion, Dunne offers few such candid moments of his subject at ease. Instead, his film flows like a survey course on the writer – talking heads, book covers, voiceover passages of her work, archival footage. A career and a life are a lot to cover in 90 minutes; Dunne does it, but with very little room to breathe. His film fails to show us how Didion lives now, nor does it probe some of her more provocative statements from the past (her takedown of the women’s movement in The White Album comes to mind). Dunne’s film will help newcomers decide where to begin with Didion, and for that it’s a useful, competently made document. But I can’t help but want more from a filmmaker with such intimate access to one of the greatest living writers.