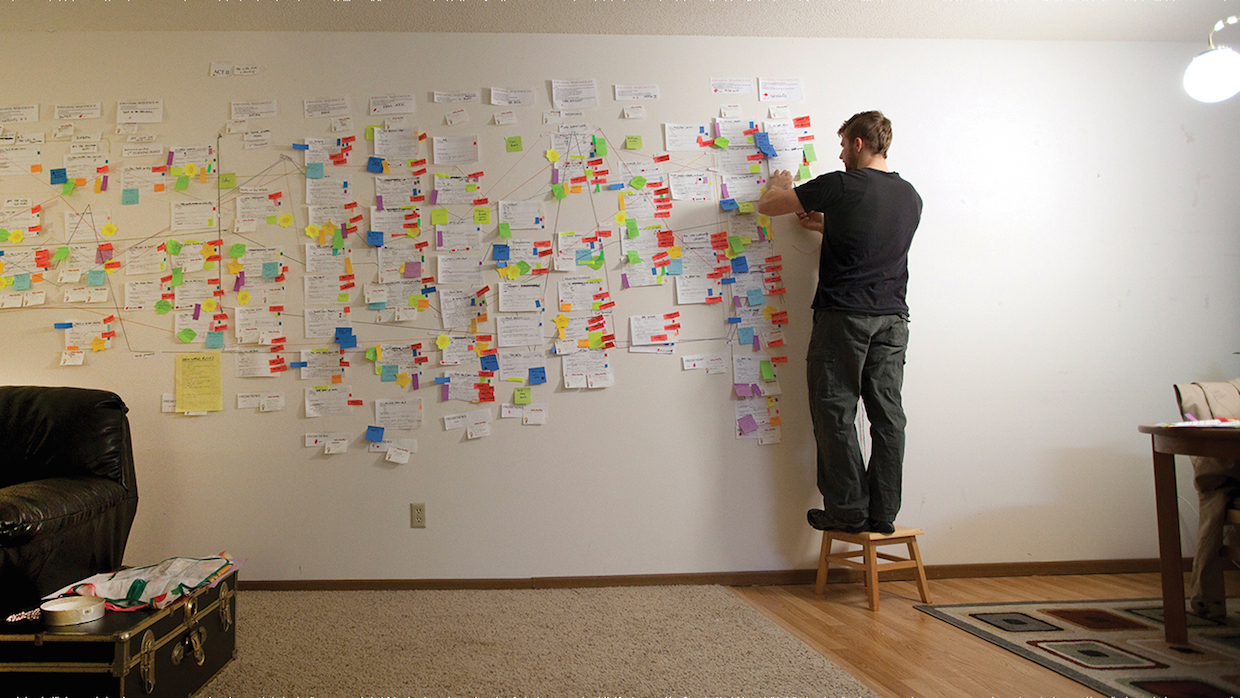 As a film critic who also serves as a festival programmer I sometimes find myself in awkward positions. Such was the case recently at the Hot Springs Documentary Film Festival in October, where A Gray State screened, along with the film’s director Erik Nelson and its executive producer Werner Herzog in attendance. Though I’d seen the film on screener, I didn’t have a strong opinion about it one way or another (and as I was only helping out with the international features this year my indifference didn’t much matter).

Of course, asked to moderate the post-screening Q&A I jumped at the chance. What cinephile passes up the opportunity to probe the mind of Herzog? (Albeit in a very public setting, and with the fest’s honorary chair, Kathleen Turner, sitting in the front row. Things tend to get a bit surreal in Hot Springs.) Figuring I should probably refresh my memory I again sat through Nelson’s doc, which recounts the disturbing life of Iraq-war-vet-turned-filmmaker David Crowley, who became a cause célèbre for the Alex Jones-style conspiracy-minded after he and his family were found dead in their Minnesota home – before he had the chance to complete his dystopian feature about a federal government run amuck. But as I watched the film a second time I was startled to find that the big screen showing alerted me to crucial aspects I’d missed the first time around. I became a bit unnerved — I suddenly had major issues with Nelson’s film.

As an onstage moderator, I decided to hold my tongue. But with the cinematic doc hitting theaters this November now’s the right moment to express as a critic what I didn’t to the interviewees onstage that day – that the film left me feeling, well, voyeuristically dirty. (And this from someone who finds the voyeuristic aspect of nonfiction filmmaking part of its appeal.) While Nelson has long been Herzog’s producer — serving in that capacity on Grizzly Man — he seems to lack the master filmmaker’s ability to dig beyond the literal. Which is exactly what the material of A Gray State required. While both Grizzly Man and A Gray State rely heavily on footage shot by their main characters — adventurous men who met tabloid-ready demises — the films differ especially in one key aspect. Grizzly Man is only ostensibly about bear enthusiast Timothy Treadwell and his death at the hands (paws?) of his obsession. At its heart, Herzog’s documentary tour de force is not even about a man, but about mankind’s relationship to (often indifferent) nature.

A Gray State, however, is a “just the facts, ma’am,” on-the-nose investigation lacking in a bigger existential picture that could have allowed it to be larger than the sum of its parts. Basically, Nelson, with the best of intentions, has set out to reclaim — during this present-day war on actual factual information — the “truth” about the grisly 2015 incident through tireless interviews with friends and family members, who paint a portrait of a deeply troubled couple whose quiet suburban life spiraled into paranoid delusion (all while Crowley faced mounting, crowd-funded pressure to complete his right-wing fiction film blockbuster). Watching the film, one can’t help but think that in Herzog’s directorial hands A Gray State surely would have been something much deeper and more satisfying — a meditation on PTSD, right-wing conspiracy theories and the effects of Internet fame on our culture. Indeed, the film’s mystery finally becomes not who killed this photogenic family but who Nelson’s film is even for. Nelson “proves” through meticulous research that what the police and relatives (i.e., “sane” folks) think happened — that Crowley snapped, killed himself and his family, and then sealed his own infamy by staging the entire event as bait for conspiracy junkies — is what actually did happen. Which begs the question, why do we in the (mostly liberal-leaning) audience need a film that proves something we’re already inclined to believe (and thus massages our confirmation bias)? Or is the film targeting Alex Jones and his ilk, with Nelson using his collection of mere “evidence” to convince them that the government and/or Islamic terrorists didn’t assassinate the Crowleys? (If so, good luck with that.)

Ultimately, A Gray State draws us into the lurid tale of a soldier who went crazy and murdered his family without offering us anything new of substance in the process. At least with Grizzly Man Herzog knew better than to fall into the easy “bear eats man” trap. That critically acclaimed pic deftly sidestepped the exploitation factor (that A Gray State, unfortunately, seems to hang on) by simply, almost imperceptibly, expanding its scope.