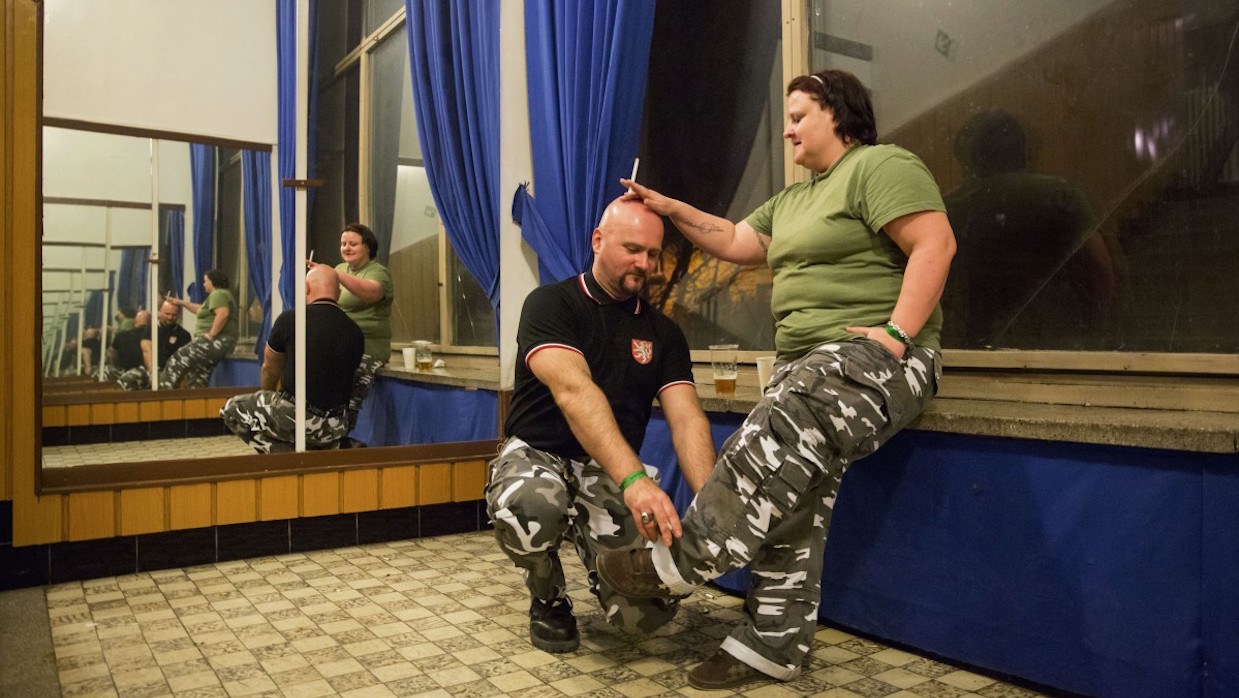 The White World of Daliborek

At the Ji.hlava International Documentary Film Festival, the tenebrous artistry of medieval Czech architecture was a fitting backdrop for a program of creatively-rendered non-fiction films, many engaging bleak contemporary realities. Set in the historic (and very walkable) downtown of the 50,000-person city of Jihlava, an hour-and-a-half drive from Prague, the 21st edition of the fest had an exciting mix of experimental films, single-director retrospectives, provocative television docs, international festival fodder and engaging forum discussions. Rising white supremacy and conservatism as well as European perspectives on Middle Eastern conflicts were recurring themes.

Passes were affordable and theaters were packed with locals and students spilling into the aisles. DJs played early into the morning to revelrous partygoers and co-eds were spotted sporting “Free Oleg Sentsov” pins, olive green jackets, black combat boots, one-inch long bangs and white-people dreadlocks. Dogs were allowed in the movie theaters and I made friends from Montenegro, Kiev, Budapest and London. While not everything playing was good, it felt like there were more gems than I had time to see. Highlights included The Singing Stones of Ayorou (1968) by Jean Rouch; Skokan (2017) by Petr Václav; Opera About Poland (2017) by Piotr Stasik; Sand and Blood (2017) by Matthias Krepp; Did You Wonder Who Fired the Gun (2017) by Travis Wilkerson; a talk by Croation theater director Oliver Frljić; the comedic timing and infectious energy of 90-year-old documentary legend Marcel Ophuls, a special guest of the fest honored with a lifetime achievement award as well as a retrospective; and eating goulash beneath the town hall’s domed ceiling marked up with dead languages and cryptic symbols.

A program of mostly contemporary documentaries has the effect of taking a temperature reading of the zeitgeist. If the films at Ji.hlava were any indication, Eastern Europe is going through a lot of the same growing pains as America. Opera About Poland, which won the award for best film from Central and Eastern Europe, presented an emotional document full of angst and anxiety. The stylized collage film knit together a voiceover culled from snippets of online forums, classifieds, speeches and weather reports with a restless original score, footage of patriotic and religious rituals and static portraits of rural Poles. In a discussion following the film’s screening, director Stasik noted the recent election of the right-wing Law and Justice Party. His film’s juxtaposition of fear, masculinity, militarism and patriotism felt particularly transferable to the analogous political climate in America.

Another film highlighted a similar parallel, though through its misfires. Daliborek is the white supremacist next door in the small Czech town of Prostějov. Filtered through director Vít Klusák’s lens, in The White World of Daliborek the lumbering skinhead, a grown man approaching forty who still lives with his mother, is a pathetic underdog like Napoleon Dynamite; when the Holocaust denier is filming his YouTtube videos, in which he frequently recites racist and misogynist lyrics, he’s presented as an endearing hack like the low budget filmmakers in American Movie. The film is comic, sure. Cinematic, absolutely. But its sympathetic portrait of a Neo Nazi, who laughs when his mother’s boyfriend tells him about shooting Roma back in the nineties, offers little of value beyond a normalization of hatred and evidence that Czech media is stumbling into some of the same pitfalls as its American equivalent, as both react to rising white supremacy.

In stark contrast, Ophuls’s Hotel Terminus: The Life and Times of Klaus Barbie (1988) offered a strong antidote to any Neo Nazi sympathizing. Made at the time Klaus Barbie was being brought to trial in France for war crimes he committed as an SS captain during the Nazi occupation more than 40 years prior, the four-and-a-half-hour film takes a journalistic approach to Barbie’s narrative, establishing the brutality of the atrocities he seemed to take pleasure in inflicting against men, women and children in Lyon before demonstrating the complicity of the American and Bolivian intelligent agencies and governments who protected him and worked with him after the war. It’s an exhaustive work that finds moments to critique how the media dealt with Barbie, noting that when he lived in Bolivia, he would charge for TV interviews. “To our distaste, even French TV paid him,” notes one interview subject. To my distaste, during the Q&A session end of the The White World of Daliborek screening, responding to inquiries on how they gained access to their skinhead subject, the director Klusák admitted they paid him and his mother to appear in their documentary.

The program at Ji.hlava suggested an expanded definition of documentary. Skokan, for instance, used documentary-filmmaking techniques, small crews, improvisational methods and non-professional Roma actors playing versions of themselves to tell a fictional story. But while these kinds of cinematic hybrids have become more and more popular the past few years, more refreshing from a formal perspective were the films at Ji.hlava made up of found footage: Sand and Blood (winner of the Silver Eye Award), which combined original interviews with refugees from Syria and Iraq with complementary cell phone and archival footage, and The Road Movie, made up entirely of Russian dash cam footage (the North American rights have already been acquired by Oscilloscope).