Ask Not What Festivals Can Do For You…. 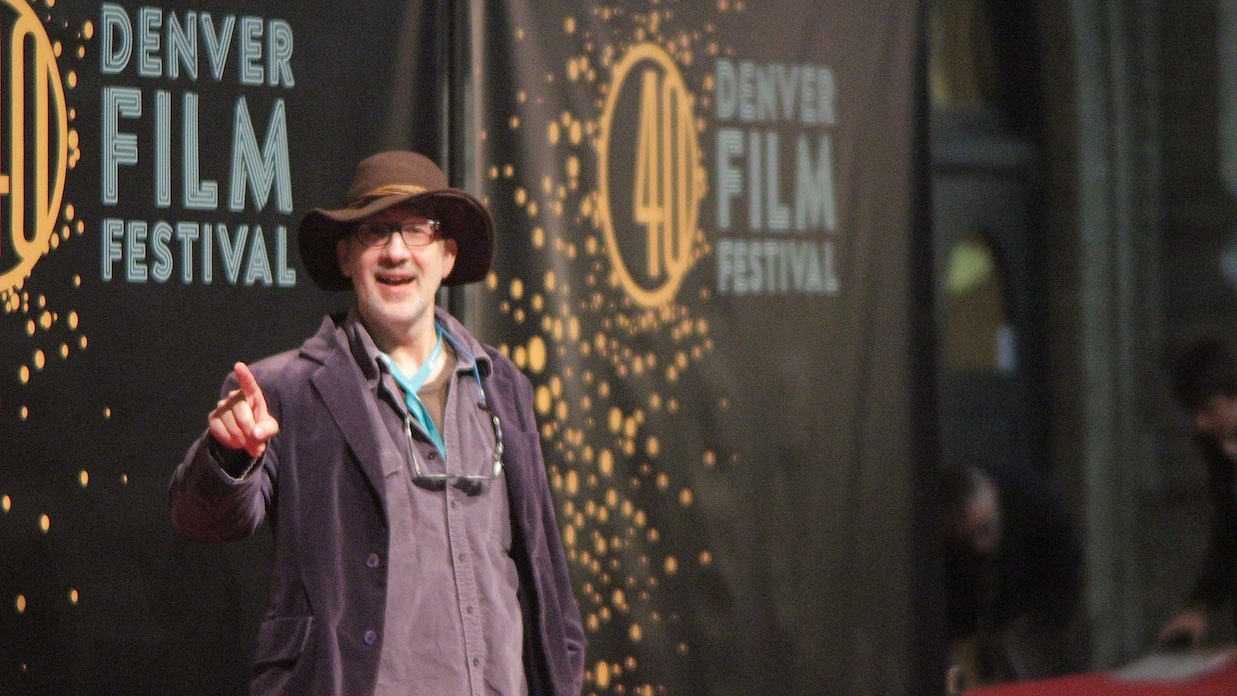 As filmmakers, we sometimes get so concerned with what film festivals can do for us and for our films that we forget about what our films can do for the festivals, and more importantly, for their local audiences. This year more than ever, I’ve seen festivals in communities around the world overcome violence, natural disasters and other communal sources of anxiety to put on amazing celebrations of cinema. They’re helping to spark conversations, rebuild damaged economies and in general just get people celebrating again with their neighbors, friends and visiting filmmakers. I’ve had a first-hand look at some of these festivals with my new film Bernard and Huey, which launched this fall.

The film traveled to the Guam International Film Festival in September, just as Kim Jong-un was threatening to rain nuclear weapons down on the U.S. territory. In the midst of heated rhetoric from Donald Trump that ratcheted up anxiety on the island, Bernard and Huey was the only mainland U.S. feature to screen at the festival, and one of my producers was able to travel there to represent the film. We worked with the festival organizers and the USO to get families at the U.S. Air Force Base on Guam free tickets to our screenings. With its roots in late-’50s Cold War anxiety, echoes of Reagan-era angst, and resonance with the contemporary political climate, Bernard and Huey is steeped in a subtext of neurosis and unease. But hopefully, for 91 minutes of urbane Jules Feiffer-written humor, the audience was able to forget about imminent annihilation and just laugh a little at Jim Rash, David Koechner and our hilarious ensemble cast. The film went over wonderfully, we won the Grand Jury Prize, and so far, no nuclear armageddon! At the Napa Film Festival

The Napa Valley Film Festival went off without a hitch just four weeks after the deadly fires in Sonoma and Napa counties. “Despite many of us being evacuated from our homes, and a few of our team members and key partners actually losing their homes, we pulled together and executed our smoothest production to date,” said festival cofounder Marc Lhormer, co-Founder and Executive & Artistic Director. No stranger to catastrophe, the festival brought the community together three years earlier in the aftermath of the Napa Earthquake of 2014. What I saw first-hand was tremendous gratitude from the local community that the festival stuck to its schedule — especially since so many other hotel bookings had been cancelled after the fire. The festival donated a percentage of its box office to the fire relief efforts and had other programs in support of first responders and victims. “The film festival served as a major mid/late Fall event to bring people back into the Valley, to get people out of their homes and interacting with each other and supporting local businesses,” added Lhormer, who runs the festival with his wife Brenda.

My fall tour also took me to the Virginia Film Festival which was held in Charlottesville just a few months after the deadly Nazi protests in the heart of town. Festival director Jody Kielbasa, who’s also Vice Provost for the Arts at the University of Virginia, said, “At the VFF, we have a long history of exploring issues surrounding race and civil rights, and it was very important to me that we provide a platform for the community to come together and process, discuss and move forward in what is sure to be a long healing process.” For visiting filmmakers it was bracing to see the spot where Heather Heyer was killed and the still-shrouded statue of Robert E. Lee just blocks away from the festival venues. One local filmmaker told me he carried a handgun for a week after the Nazis came to town just in case there was more trouble.

The festival had enough time to craft a series called “Race in America” that featured a special appearance by Spike Lee, who screened his documentary 4 Little Girls, as well as docs I Can’t Breathe, about the death of Eric Garner, and Oscar-winning OJ: Made in America, presented by its director, Ezra Edelman. “Additionally, we presented the premiere of the documentary Charlottesville: Our Streets, which used footage captured by more than a dozen local filmmakers and citizen journalists to tell the story of August 11 and 12 through Charlottesville’s own eyes,” added Kielbasa. “The sold-out screening was meaningful and cathartic for the audience of more than 1,000 people, many of whom had spent those days on the front lines of an event that was seen by the entire world.”

The St. Louis International Film Festival was also recoiling from violent protests that had occurred right in front of its main venue, The Tivoli Theatre, just a few weeks prior to the festival. Many local storefront windows had been broken, including those of several festival sponsors. I lived a block away from the Tivoli when I was in college at nearby Washington University, and I still know many community members in the neighborhood. But like in Napa and Charlottesville, the festival has helped serve as a catalyst for the local community. “I certainly wouldn’t want to oversell the impact of a film festival in helping to heal a community, but we absolutely make an effort to both address pressing issues here in St. Louis and promote the kind of dialogue that’s necessary to bridge divides and that eventually leads to reforms,” said Cliff Froehlich, Executive Director of Cinema St. Louis, which puts on SLIFF every year. Specifically in the wake of the Michael Brown shooting and Ferguson uprising, the festival expanded its sidebar called “Race in America: The Black Experience.” It offers over half of those programs for free and brings in many narrative filmmakers, documentarians and often their subjects, too. “Have we created real change in the process?” asked Froehlich. “Likely not, but I hope that we’ve touched and enlightened people, and perhaps opened a few folks’ eyes to experiences that they seldom encounter and even actively avoid. That’s the goal, at any rate, and I optimistically think that we hit more often than we miss.”

Beyond the headline-making crises that coincide with festivals, it seems that just about every festival I went to this fall was in a community experiencing some local tensions. The Oldenburg Film Festival in Germany took place just a week before far right nationalists gained a toehold in German elections, and I was woken up from my hotel by the staccato sounds of a political rally just outside my window. The festival itself is famous for being one of the only ones in the world that holds some of its screenings in the local prison. Oldenburg audiences were definitely attuned to the subtexts of the films being shown, whether it was a retrospective screening of Rainer Werner Fassbinder’s eerily timely film Despair about the rise of Nazism in Germany, or newer films like mine. One woman cryptically whispered to me after my screening, “The bombs are going off in England. It has started.” At the São Paulo International Film Festival (“Mostra”) there were daily political demonstrations just a block away from the festival headquarters. Only in Brazil could locals joke that their political circus made the United States’ government look like a bastion of mature civility. At the Denver Film Festival, visiting filmmakers wondered why ushers checked the exits and aisles of every screening with flashlights several times during each screening. And then we realized that in the aftermath of the 2012 Aurora theater shooting, even a simple trip to the movie theater is still tinged with a sense of dread. Festivals from Key West to the Bahamas have had to deal with the aftermath of this year’s devastating hurricanes. And at the otherwise gorgeous Anchorage International Film Festival, it seemed most conversations with locals included some interesting story of how people have died in Alaska, from serial killers to bear attacks to decapitation from falling icicles. But their screenings were packed, and locals were thrilled to meet international and “Lower 48” filmmakers who dared to visit Alaska in the winter.

Of course, the other source of anxiety on the festival circuit this year has been the rise of the #MeToo movement and all the heinous revelations that prompted it. In retrospect, Toronto is saddled with having premiered Louis CK’s film I Love You, Daddy. The New York Film Festival cancelled their Closing Night red carpet reception for Woody Allen’s film Wonder Wheel the same week Ronan Farrow’s explosive New Yorker story came out about Harvey Weinstein. The St. Louis Film Festival cancelled a screening of The Weinstein Company’s film The Upside. Napa Valley decided to show the same film, but Harvey’s name was scrubbed from the credits. The Chicago Comedy Film Festival pulled a documentary about Andy Dick a week before the festival. (Since I happened to be on a festival tour layover in Chicago, they showed my film Bernard and Huey instead.) Meanwhile, Sundance dropped Morgan Spurlock’s sequel to Super Size Me shortly after announcing it was in the festival.

On the other hand, many films on the festival circuit have dealt head-on with some of the issues of sexual harassment and female empowerment. Onur Tukel’s film The Misogynists, which screened at festivals from the Hamptons to Cucalorus, has a brilliant performance by Dylan Baker as an out-of-control Trump supporter. Alain Gomis’ Berlinale premiere Félicité screened from Montreal’s Festival du Nouveau Cinema (where I saw it) to São Paulo and Calgary. It’s a brutal but uplifting film about one woman’s defiance in the face of constant challenges on the streets of Kinshasa. Emilie Upczak’s narrative feature Moving Parts, which screened in Denver and Havana, is a searing story of human trafficking in Trinidad, shot beautifully by Nancy Schreiber. I caught up with SJ Chiro’s powerful coming of age film about a young woman’s journey in Lane 1974 at the Tacoma Film Festival. And on a lighter note, my own film Bernard and Huey serves as a satire of men behaving badly, and features exceptionally strong performances by such actresses as Mae Whitman, Sasha Alexander, Nancy Travis and Bellamy Young.

The subject matter of sexual harassment has dominated Q-and-A’s, panel discussions and other festival chatter since the fall, and I’m sure will continue to influence what films festivals program, and the context in which audiences view those films. For many audience members, meeting real independent filmmakers at festivals has been their first chance to ask people in the film industry what we knew, when we knew it, and if we’ve been part of the solution or part of the problem. And for filmmakers ourselves, these gatherings have been a cathartic way to process the daily revelations and re-examine our own roles and responsibilities.

If you focus solely on the handful of so-called A-list festivals, you’re really missing out on a world filled with anxiety, but also travel, adventure and opportunity. We sometimes forget that the purpose of film festivals is not just to get distribution or launch an Oscar campaign, but rather to entertain and encourage engagement and dialogue between audiences and filmmakers in a live setting that can’t be replicated any other way.

Filmmaker and Slamdance co-founder Dan Mirvish’s new film Bernard and Huey played in 19 festivals in five continents prior to screening as the Closing Night Film at Slamdance 2018. He will be signing his Focal Press book The Cheerful Subversive’s Guide to Independent Filmmaking at Dolly’s Bookstore in Park City on January 21. He wrote about the need for a broader festival strategy in his Filmmaker story Toronto, Toschmonto: Time for a Festival Plan “B”: 12 Steps to a Saner Festival Game Plan. ]