“You Must Be Reactive in the Face of Danger”: Dieudo Hamadi on Kinshasa Makambo 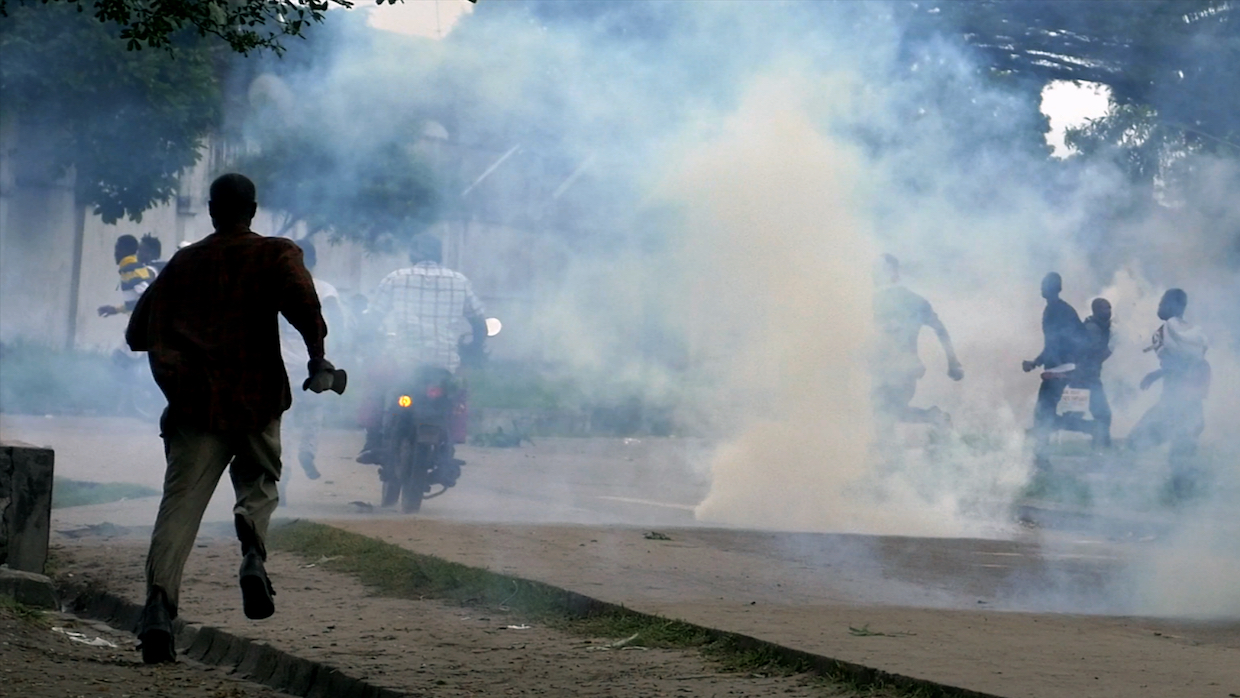 by Steve Macfarlane
in Directors, Festivals & Events, Interviews
on Mar 13, 2018

Having world premiered at the Berlinale, played True/False and now proceeding to Cinéma du Réel, Dieudo Hamadi’s extraordinary Kinshasa Makambo has a shot at becoming one of the major political documentaries of 2018. The film follows two young activists, Ben and Jean-Marie, organizing for an end to the reign of Joseph Kabila, current president of the Democratic Republic of the Congo. While Kabila assumed the presidency in 2001 after the assassination of his father (US-backed autocrat Laurent-Désiré Kabila), Hamadi’s film centers on their dismayed responses to the government’s decision in 2016 to suspend elections until further notice — upturning a provision of the Kabila government’s constitution, signed into law in 2006. (The elections were rescheduled for 2017, then pushed back to 2018; Hamadi is less than optimistic they will be held anytime soon.) As shooter, Hamadi is so firmly entrenched that he skips the customary, facile historical exposition: hushed, clandestine meetings of young men who still hope to one day see Kabila toppled play out at thriller-worthy pace, while the footage of subsequent crackdowns on hordes of street demonstrators is beyond harrowing.

Working as his own cinematographer (and only sometimes with volunteer assists on sound), Hamadi filmed Ben and Jean-Marie for over a year and a half, amassing 70+ hours of material, mostly discussions between differing blocs of anti-Kabila activists. One sequence — wherein activists hose down old plastic bottles, recut them into ad-hoc masks and slather their faces with butter to counteract the police’s inevitable tea gas grenades — builds to a cliffhanger that’s both organic to the material and almost unbearably suspenseful. The film’s lynchpin is the 2017 death of Étienne Tshisekedi, a longtime opposition politician who represented the most popular challenge to Kabila’s rule. Kinshasa Makambo is a rarity among present “issue docs” for how well it trusts viewers to catch up to a fast-unraveling situation, but also hinges on a fascinating irresolution: the outcome of Ben and Jean-Marie’s grassroots organizing remains unclear, as this is ultimately a tragedy about people struggling under a power that remains congealed at an unreachable top.

Filmmaker: How optimistic were you about the Kabila administration’s initial promise to hold elections?

Hamadi: This government decided to amend the constitution in May 2015. My friends and I thought it could be the beginning of a big destabilization endangering the election. Ben was the first protagonist I met, through a common friend; this was 2013. I had seen him give a speech, and I found him so brilliant, so involved, so charismatic. We became friends, and I proposed to make a movie about Ben’s struggle. It was already a fight, a struggle for respect of the constitution. Ben finally had to go in exile, to New York City, two or three years later. When the schedule date of the elections was coming, it was not possible to keep filming Ben because he was in exile. So Ben recommended I film two of his friends, Jean-Marie and Christian. Jean-Marie was one of the leaders at this time, because Ben was in exile.

Filmmaker: Tell me about the decision not to depict Kabila himself, or his forces, beyond the minimum.

Hamadi: There are two reasons, in fact: the first is, the police were really not cooperative, obviously — they had the freedom to kill. As you can imagine, the presence of a camera in this context was not welcome at all. The second reason, less technical but more linked to the filmmaking ideas — for me, as a young Congolese, [Ben] shares the will to change the reality of the Congo.

Filmmaker: I noticed the radicals quoting Lumumba, wearing Lumumba t-shirts. But you also opt to foreground the current moment, and ditch the typical documentary exposition — there’s no voice-over explaining Belgian colonialism, the American interference with elections, the lithium, so on.

Hamadi: What really interests me are little, individual, personal stories. Of course, the history and context are in the background, but my point is to tell stories of people; for me, the link with the audience is through emotion, and my purpose was to show the youth of the Congo fighting to have elections. My purpose is not pedagogical.

Filmmaker: You never got in the way of your own story.

Hamadi: This was a choice, from the very first stage. What I really wanted to do was catch some moments in real life, daily life — when you edit different moments together, you can tell a story unto itself. You don’t need any commentary, interviews, voice-over, etc. This is really not my purpose.

Filmmaker: Tell me about Etienne Tshisekedi. Your protagonists rally around his platform to demand change, but they’re also seen arguing about the merits of that decision. At least one makes the argument, which was widespread before his death in 2017, that he was too entrenched in the establishment, “lining his pockets” with the popular movement’s support.

Hamadi: It’s a very difficult choice to make. Those who decided to move forth without Tshisekedi were proven correct: they had made the more thoughtful, efficient choice. But for the other side… You have to know that it was not possible to gather so many in front of the police, the army, and so on, alone, without Tshisekedi. So this becomes a very difficult choice to make.

Filmmaker: Did the edit shape your analysis of the political situation, or did you know what you were seeing all along?

Hamadi: After each shoot I did some light viewing of rushes, just to have an idea about what I had, and to see if there are any technical problems. But that’s it. I waited, and the movie was really edited after shooting. The film got clearer and clearer after each shoot. Once I said, “Okay, I got what I need to do the movie.” Eventually, when I started to see material, I’d think, “No, actually, I failed. I don’t have the movie I thought I had.” A bad surprise.

Filmmaker: What was missing?

Hamadi: It’s hard to say. When I see the movie now, it’s something linked to the bravery or the courage, the determination, the will of these protagonists — there’s something that I didn’t put enough of into the movie. What’s missing is some manifestation of their courage from when I was not there, situations where I considered it too dangerous and didn’t shoot. They never stopped fighting, cameras or no cameras: they were up against tear gas, real bullets. They didn’t stop, and I was the one thinking, “I have enough material; I don’t need to follow them.” In fact, what’s really clear to me now is that it was dangerous.

Filmmaker: Making this film, as well as touring it now, must have meant changing your own day-to-day life.

Hamadi: Concerning promotion and distribution of the film, I really don’t know how it’s going on because right now in Congo it is very very hot, very dangerous — I don’t know how this movie could be seen there, or how it can contribute to the situation. It’s very difficult to control, to know, so far. When I was shooting, it’s true that I had to leave the quite-poor area where I used to live, to go to a place more discreet, more hidden, because I was also in danger. I was very cautious with all my rushes, my hard drives, I was also under the threat of being kidnapped. It’s very common in Congo, when somebody is not useful to the government.

Filmmaker: Have you received threats?

Hamadi: No threats were made to my physical integrity. But for example, if I’m tagged on Facebook, it’s possible that people will come knock on my door that evening, wanting my rushes, wanting to know why I am there. So I was extremely concerned about the possibility of doing the film, not just shooting but also finishing.

Filmmaker: You must be very quick on your feet.

Hamadi: When you’re a journalist, a young guy, there is no shelter in these situations. You could really be in danger. You must be reactive in the face of danger, even more so than before. I think I am reactive in general. I am quick on my feet. When you want to capture reality, it’s unpredictable. You can’t doubt or second-guess it — it’s just important to find the right angle and the right position.

Filmmaker: How elaborate an international coproduction was this?

Hamaadi: The film started with another French production; for several reasons, the shooting was stopped. I met [production manager] Quentin [Laurent] in the EuroDoc workshop. He had the opportunity to present the project to a Swiss producer and a Norwegian producer; we’ve tried to find French money, from Arte-France, a broadcaster, as well as Al Jazeera, RTS in Switzerland (a Swiss broadcaster) and a little bit of money from the Norwegian Film Fund. The film originally began with Ben in New York, working as a garbage man. Quentin found this very very strong so we decided to give me money, to be able to stay in the Congo, to stay there as long as possible; during this time we were convinced that our story was so strong we would be able to find money to help make it a real coproduction.

With all of this, they’ve been able to send me quite a bit of money. It’s dangerous, so we need Ben and his friends to change their locations constantly, and in the end the movie was made in a rush just before the Berlinale. The picture was only locked in mid-January, then we rushed into color grading and the sound mix in Switzerland. Even in Berlin it was not the final version, nor at True/False. We didn’t have the time to correct it, so we have found a few days now to finish this one, and we’ll have two or three other cuts of the film: one 59 minutes for French TV broadcast, one 52 for international sales and one 47-minute cut for Al Jazeera. But the festival version, the 73 minute one — that’s the “cinematheque version”, and the changes are very minor, very small details. The 73 minute one is 100% my vision, where I was free to do whatever I wanted.

Filmmaker: But wait – does this mean Kinshasa Makambo is what brought Ben out of exile, back to the DRC?

Hamadi: We finally realized the movie needed to be more balanced between Ben and his other protagonists – because eventually, Ben had not become what we expected. The Al Jazeera version is quite different — the whole story centers around Ben, with a voice-over, so it’s very different. It was my own idea. In that version, we’re gonna have the New York part – there are a lot of moments in the long version where Ben is thinking, wondering what’s happened in Congo, and we’re in his mind, so having footage like that from before helps us foreground his voice.