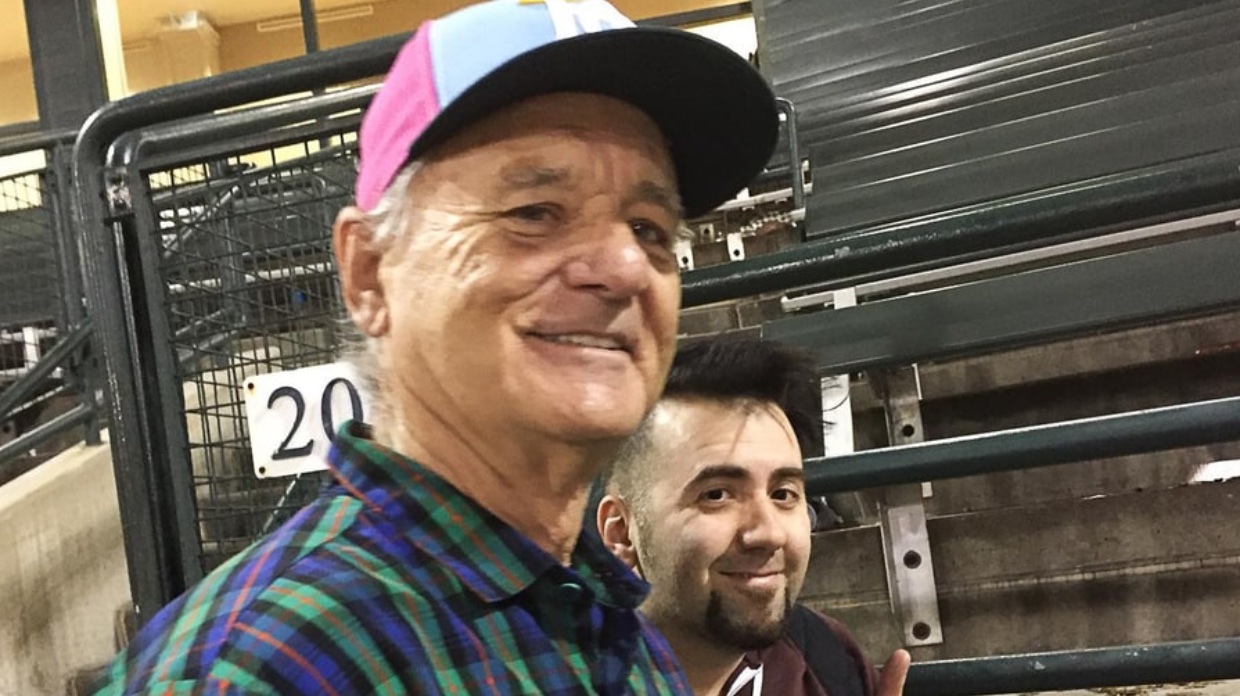 by Tiffany Pritchard
in Directors, Interviews
on Mar 16, 2018

New Jersey-based filmmaker Tommy Avallone is gathering serious buzz at SXSW for his The Bill Murray Stories: Life Lessons Learned From a Mythical Man, a doc charting Bill Murray’s impromptu drop-ins on “the regular folk” — encounters seem closer to urban legends than actual experiences. Even Bill Murray himself said at ComicCon in 2015 that the stories — such as his bartending at the Shangri-la bar in Austin during SXSW 2010 or his showing up at a birthday party in South Carolina after a basketball game or his washing dishes at someone’s house party in St Andrews, Scotland — weren’t true, though they “sound like fun.” Yet, as Avallone and his producing partner Max Paolucci, who previously collaborated on the Ghostbusters fan doc, Ghostheads, found in their extensive research, somehow, these tales are indeed true.

Filmmaker met with director Avallone and producer Max Paolucci while at the film’s world premiere at SXSW.

Filmmaker: What inspired you to make this film?

Avallone: I was interviewing some of the Ghostbuster fans, and I fell in love with these subjects. They were so genuinely excited, just as the fans we came to meet during the filming of this film.

Paolucci: We did a lot of research, and we thought we’d find a lot of stories that were not true or overblown, but 95% were all true. People were very proud and had come to life when asked about these stories, and that is empowering and energizing to see how [a celebrity like Bill] can be. There is nothing about it like, “I’m Bill Murray, a limo pulls up, fireworks go off.” No, it’s just Bill over someone’s shoulder playing the piano, or Bill bartending, or Bill having a conversation with someone. The more we got to talking to those people, the more we got to see this throughline — it was really affecting people. He was just being a good guy.

Avallone: He honestly likes to sit down and talk to people about them. There is this scene where he meets this guy at Shangri La in Austin and they are talking about music; he cares about other people.

Filmmaker: Talk us through the timeline of the film.

Avallone: We started around 2015, and we shot the kickball story, an expert, and karaoke story so we could put together a sizzle reel. And then during Tribeca, after Ghostheads was doing well, people started asking us what we were doing next, and we said, “Here is the sizzle for Bill Murray. Let’s do it!” And that was that — we started filming in the later half of 2016 for around a year to a year and a half and we edited full time for around nine months.

Filmmaker: Could you talk through what kind of film crew and equipment you had to work with?

Avallone: We are from New Jersey and Philadelphia, and we have our own equipment. The crew is me and Max plus we have a sound supervisor and a DP, and I also do the editing. It ruins everything, it becomes less intimate if you have more people. We used the C300 Mark II and 5D Mark III, and sometimes we use the iPhone too.

Paolucci: We shot a lot on the iPhone using a filmic app that lets you shoot RAW, and we used an Osmo stabilizer. A C300 weighs too much to run around with. And we started seeing a better result on the iPhone.

Avallone: Because we shot everything 4K, we had to have 17 TB on a bi-coastal mainframe. It was intense. And I moved halfway through — [Max] is in Philly and I am now in Burbank. It was always like once a week Skypes. I am also awful at Dropbox.

Filmmaker: Do you edit throughout production?

Avallone: Editing didn’t start until we were done with shooting. I would talk to Max — “What do you think of this?” That is my favorite part of making these movies. We drove to South Carolina to interview these people, and as soon as you get back in the car, you start asking yourselves, “So what do you think?” I love talking about what we just did and put puzzle pieces together.

Filmmaker: Was it challenging to access these people and the footage?

Avallone: I can’t imagine how someone would have done this 20 years ago. But the kickball story is a good example. So you go on Facebook, and you try to find that person and that person lives in New York, so you go through their friend list. Who is the actor/comedian that accepts everyone, so you find them and that person accepts you and you can then friend Margaret.

Thankfully I did the I Am Santa Claus movie [that documents an entire year in the lives of five real-bearded professional Santa Clauses] so I could reference that as my other movie. And some people had actually seen it, and that’s awesome. Some people you had to convince… Some people would go, “This is the thing that’s happened to me – why would someone want to videotape that?” But most people jumped on.

Avallone: We got handed footage that has never been seen. There is stuff from the Austin house party — there are pictures out there but this guy has 30 minutes of video because sometimes they video themselves. And then Bill Murray shows up. It was fun to see that! And this guy on his motorcycle in California put a GoPro on his helmet so he could film for his YouTube channel, and there is this truck stopped on the side of the road, so the motorcyclist decides to stop and help this guy out. And it’s Bill Murray! It’s so random. It’s like Where’s Waldo? And no, we didn’t have to pay for the footage.

Filmmaker: There is an image of Tommy with Bill Murray at the start. How did you decide to structure the story?

Avallone: The start is of a thumbnail picture of me and Bill. We purposefully did that because we didn’t want this to be a movie that is like, “My name is Tommy Avallone, and I am trying to find a Bill Murray story.” Let’s get the photo of me and Bill out of the way and then just enjoy the story. We didn’t want people starting to think it was something that it wasn’t.

The ending was hard — I was trying to figure out the best way to put it together. I would write something and send it to Max and we’d come together and try and write it. I was sick for a whole month. My voice was this nasally awful thing — not ideal for voice-over. So it was about fine tuning the opening and the ending.

Filmmaker:What do you want people to take away from this film?

Paolucci: Ultimately things don’t need to matter as much unless you make them matter. A small thing can mean so much. If you stub your toe, you shouldn’t let it ruin your day. When we talked to these people, this is their biggest story, they tell it to everyone. And it has lit up their life. This movie has something we can take away as filmmakers.

Filmmaker: So what about your wish to meet Bill Murray?

Filmmaker: What are you working on now?

Avallone: I’ll start editing the next one. It’s called Waldo on Weed. The idea is this guy from Philly, who got eye cancer beginning at six months old, used counteractive chemo. He filmed all this stuff from a flip cam trying to go through it. So we were like “shoot the interviews”. Whoopi Goldberg is our EP.