Film Criticism, Nicholas Rhombes, Out of the Past, The Blair Witch Project, The Descent, The House of Leaves, The Rhumpus 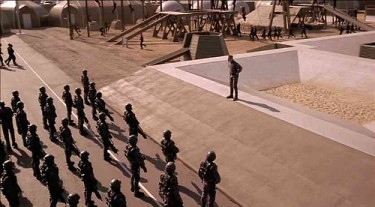 From the 40-minute mark of "Starship Troopers"

The rise of the web has led to an explosion of film writing — Roger Ebert has called it “A Golden Age of Movie Critics.” I don’t disagree with him, but I also think it’s fair to say that with the exception of comments boards and social media, the web hasn’t changed the actual form of film writing that much. A few people (Matt Zoller Seitz, for example), are exploring long-form film criticism online through engagingly edited videos. And, of course, the web has brought David Bordwell’s essential essays exploring films through the history of their technologies, styles, and audience’s perceptual abilities to a much larger audience.

Another writer who is looking at films through an original lens is Nicholas Rombes, whose “10/40/70” series at The Rumpus examines movies through the specific scenes occurring at those minute marks. It’s a concept that might seem more akin to a conceptual artwork by Steve McQueen or Douglas Gordon. In isolating and foregrounding individual moments, it also severely reduces the amount of textual information that can be employed in a discussion about a particular title. But the tight focus paradoxically reveals worlds of meaning — some having to do with the films and some not. And, it has the effect of liberating Rombes’ writing from many of film discourse’s most boring conventions. For example, here’s Rombes on the collision of the “10/40/70” concept and The Host:

I find myself trapped by the very constraints that I myself have set. In this 10/40/70 of a monster movie, not one of the frame grabs captures the monster, or even any terrifying monster-related action. Does this mean that 10/40/70 is ailing, and in need of a liberalizing policy? Perhaps an exemption to the original constraints that might read something like this: In the case of a movie wherein the 10/40/70 method does not yield any images of crucial importance to the very plot and essence and reason-for-being of the movie, the author is permitted to select one extra frame that reveals a visual to illustrate an element of the movie’s central story arc.

Absolutely not. A resounding no. The liberalization of the 10/40/70 constraints would render the experiment useless. In fact, the original constraints are designed to detour the author away from the path-dependent comfort of writing about a film’s plot, the least important variable in cinema.

I was going to just write a regular blog post about Rombes and his series, but then I decided to instead do an email interview where I’d ask him directly some questions about his approach. The interview is below and you can check out his work here. 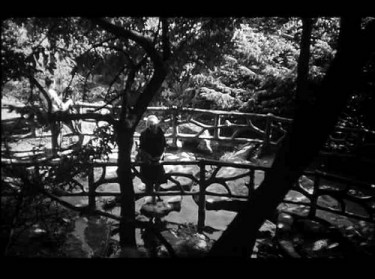 Why 10/40/70?  Why approach film criticism from this point of view, and what prompted the concept?

When I first started teaching film in the early 1990s, we’d screen them on via VHS tapes playing on VCRs hooked up to TV sets. Pausing a film for an extended period of time to look at the composition of a frame wasn’t practical. It was only with the advent of the DVD it and large-screen projection that it became feasible, in my film classes, to pause a film with clarity and really explore the meaning of the image. This—and an essay by Roland Barthes called “The Third Meaning: Research Notes on Some Eisenstein Stills”—really transformed the way I thought about film. It was an obvious realization, but one I hadn’t thought about too much: that films are composed of discreet images, and these images have a photographic power of their own.

The idea that constraint can produce creativity—this is wonderful and liberating, especially as harnessed by the Dogme 95 filmmakers and in films like Alexander Sokurov’s Russian Ark. I wondered how this might manifest itself in writing about film. This is the heart and soul of 10/40/70. Rather than pursue a pre-determined idea throughout a film, what if the film itself dictated its own terms? I was searching for a mode of writing about film that could be as experimental and unexpected as film itself. Liberation from the tyranny of writing about film with a pre-determined idea in mind. This is what I am after.

In the world of traditional screenwriting, the kind taught by Syd Field and Robert McKee, a page is a minute of screen time and minute 10 is the so-called “inciting incident.”  40 and 70 are less defined — ten minutes after Act One and a few pages before the end of the third act. Why these specific numbers, and have you developed your own unifying idea of film theory of narrative structure based on these observations?

It’s interesting that you’d ask that, because I hadn’t thought abut the correlation between film time and page time until the Blair Witch/House of Leaves column. But I certainly did want the project to select frames from near the beginning, middle, and end of most films. The other reason for the numbers 10/40/70 is purely semantic: I liked the one-, two-, three-syllable sound of it, and the way each number incorporated the beat of the previous number.

In terms of a unifying theory, what has been a surprise via the 10/40/70 method is how radically unpredictable most films are at the level of sheer image, and how resistant they are to imposed interpretation. In terms of narrative arc, it’s true, many films follow a familiar pattern. But on the level of image, you never quite know what you’re going to get with 10/40/70.

Does the 10/40/70 principle isolate and reduce, or does it find the whole within the parts?

With some films, I’m hoping that the 10/40/70 principle finds the whole within the parts. Sometimes it does, and sometimes it doesn’t, which I think means it’s working like it should, as a sort of random-generator of meaning. The method works best when it isolates and reduces, so that unexpected meaning blossoms in a field of familiarity.

Do you sometimes find yourself at odds with your concept? I notice some weeks you adhere to the “strict constructionist” application of the concept, while other weeks are more expansive, drawing in broader historical and artistic commentary.

Your question cuts to the heart of it all. Yes, I fight the concept all the time, especially when the film does not yield what I expect it to yield. A good example is The Host. I very much wanted to write about that monster-tadpole. But it didn’t show up. This turned out to be good, because it forced me to address different aspects of the film, ones I hadn’t noticed before. Sometimes certain frames allow for broader commentary beyond the literal frame, and sometimes they lock you into the frame itself. This is a real tension in the 10/40/70 method that always threatens to explode. At the 40-minute mark of Out of the Past, for instance, I felt that Ann’s gaze touched on a recurring visual logic in the film, so I talked a bit about that.

How do you select the films?

Part of the 10/40/70 goal is to disrupt the intentions of the film critic or writer. So I try to select films from different genres, time periods, nationalities, so that the project doesn’t become a study of one particular film trend, genre, style, etc. Having said that, the films so far are all narrative films, and they do reflect something about me. If I could erase that element, I would. Ideally—and I’d like to try this as the project continues—the films themselves would also be selected via the 10/40/70 method. For instance, I could select the 10th, 40th, and 70th film released by date in, say, 1977. Now that I’ve said it, I’m going to have to do it.

As a result of doing this column, when you watch a film now, are you waiting for and then focusing on the 10/40/70 minute marks?

It’s always in the back of my head. You begin looking for the beauty and surprise not of a film’s plot or overall style, but at the level of image. I recently saw Square in the theater, but it was such a tight, powerful film that I soon was lost in its world, and didn’t once think about 10/40/70. I was overpowered by the film, though I resisted. I like a fight like that. 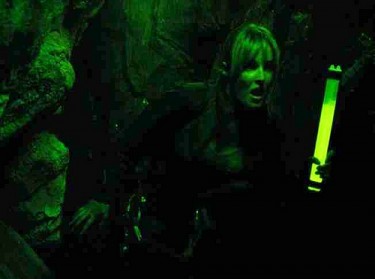 70 minutes into "The Descent"

Yes—when I watched The Descent again for the 10/40/70 project, I had remembered the first “green light” scene coming much earlier in the film. Often a scene will throw me off balance, especially when it comes right before or after an iconic, memorable scene. It’s almost as if the most iconic movie scenes function like black holes, pulling in and absorbing the meaning of the surrounding scenes. It’s these in-between moments, otherwise overlooked, that 10/40/70 can, with chance, discover.

Are you able to extrapolate about genre, or mode of production, as a result of doing this column? Are patterns emerging?

Strange as this may sound, I’m trying not to find patterns, at least yet. If I’m lucky enough to make it to 100 columns, I plan to create a database of images. I’d have the 100 images from 10 minutes, 40 minutes, and 70 minutes, and classify them according to parameters like close-up/medium-shot/long-shot, action or static, etc. An attempt to find meaning in randomness. Old habits die hard.