You Are Not A Unique Snowflake: Sean Porter on How to Get Ahead in Filmmaking 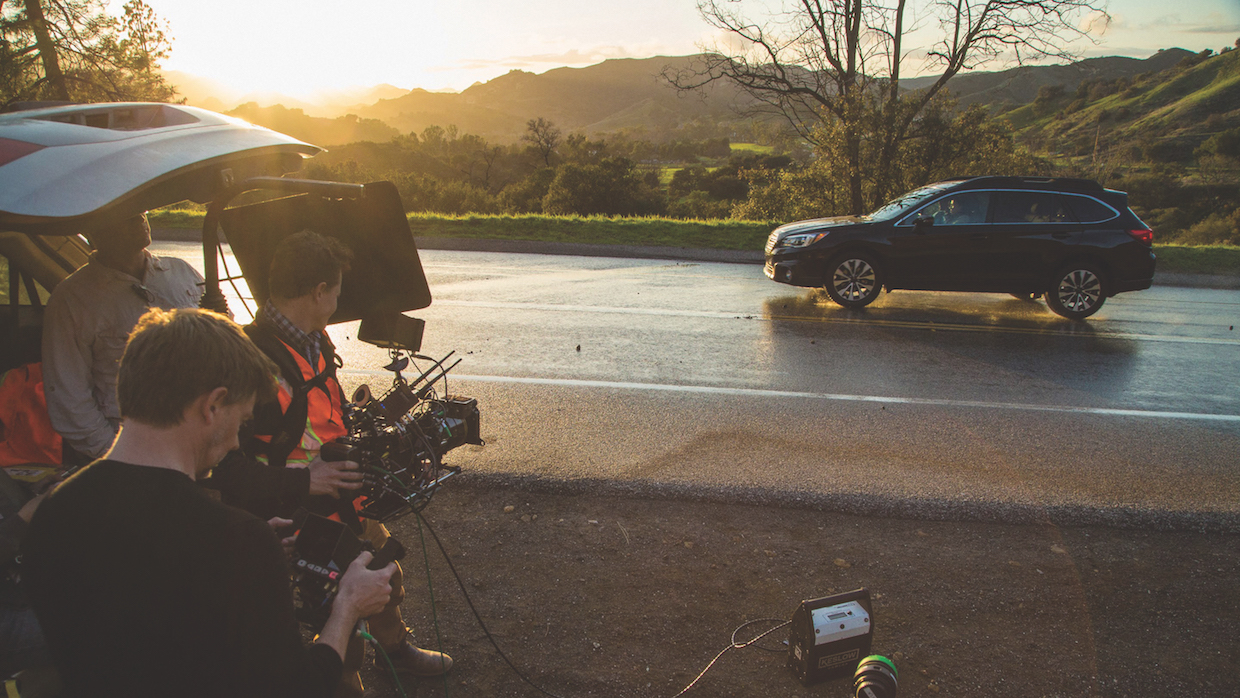 I don’t think I’d be out of line if I said the DP job market is heavily saturated. IATSE wouldn’t tell me the actual number of jobs available last year, but according to the internet there were 157 TV shows in production and roughly 250 features released (both union and non-union). Currently, there are more than 2,000 Local 600 members on the active DP roster, and while some of them are retiring this number doesn’t include the many operators stepping up and shooting on their way to re-rating. Add to that a small number of in-demand cinematographers who take up the lion’s share of the available commercial and feature work and you’ve got some pretty bleak stats for the rest of us. And, of course, I’m not including the endless stream of non-union DPs battling to break in. After some in-depth statistical analysis, I realized that that leaves the average DP with just 2.5 jobs a year (OK, I actually totally made that up, but it’s probably an equally disappointing number). So, what do you do to get above the fray?

It goes without saying that a significant part of our job is figuring out how to set ourselves apart. Is it good enough to be a brilliant artist, even if you can’t compose a coherent email or make it to set on time in more than flip-flops? What if you wrap every day early and under budget, but your work sort of looks that way, too? Will that bring waves of work from less discerning producers? Many moons ago, I was a second camera operator on a crew that shot behind-the-scenes footage for high-end Macy’s photo shoots. Glamorous work it was not, but we did get our fill of cold-pressed juices down the hall at Milk Studios, so that sort of made up for it. One day, a fellow walked in, well- styled and sporting an eastern European accent and not one but two iPhone 4s. He was an apparently sought-after, self-proclaimed “iPhonographer,” and he had the apps to prove it. He proceeded to hang out with the talent and agency creatives, double-fisting his iPhones and lavishly applying the best of 2011’s filters and rough-edge film borders to his work. I do give him credit for not shooting selfies with the models the whole time (luckily, selfie sticks hadn’t hit the market yet). But I remember walking away from work that day thinking, “This guy just probably made four times what I did—what’s his secret?” I told my wife Laurie the story when I got home, and she casually replied, “Well, maybe you should get a nice hat and don an accent.”

It may have been a joke, but even in the pre-Instagram era, self-advertising by way of “standing out” has always played more than a superficial role in getting DPs work, whether it’s the shoes on your feet, the vintage Leica hanging from your shoulder or all the new gear in your van. Separating yourself from the thousands of other DPs out there clamoring for the same work is no joke. Content makers often are attracted to the other, the fresh, the exotic, and fulfilling that desire (at least in appearance and mannerism) can make a lasting statement even if your work is average.

But this edict isn’t about going out and spending your per diem on some new kicks and a dialect coach and hoping that’ll land you that new Heineken campaign. It’s about how to set yourself apart and understand what else you bring to the table that will tip the scales in your favor when weighed against your peers. Not being a fashionista, iPhonographer, or holder of a 100K+-follower social media account, I offer you these admittedly less-cool/more-work recommendations:

1—Be smart, but not a smartass. I can’t emphasize enough how important attitude is in this industry. Yes, there are a couple of A-list A-holes who get hired because they bring a level of prestige, fame, stories, or who-knows-what. But for the rest of us who don’t have the luxury of being credited to so-and-so’s insert famous movie here 30 years ago, we have to rely on our less superior IMDb and our more superior disposition. Ego doesn’t have a place in the service of a director, a producer, or a client. Years ago, a close friend and budding commercial director and I got offered a few decent campaigns. The scripts were always just OK, but we knew if left to our own devices we could make something better, something special. I’ll admit that on more than one occasion we prioritized better images and storytelling over communication and collaboration. Once, we even tried to get out to a distant location for a shot without their knowledge—and got caught. While we might’ve been praising ourselves for successfully stalling production and evading feedback so we could shoot a whole ad at magic hour, the net result was a stressed-out producer and an agency who would be looking elsewhere next time the job came around, not to mention a pretty stern conversation with said aforementioned stressed-out producer at the end of the job. We felt like we were bringing them more than they bargained for, but it was at the cost of the relationship. It was a lesson in humility; letting “art-above-all” arrogance lead the way toward standing out only smothered our chances of moving forward.

2—Bring something to the table, but don’t undercut the chef. A lot of us DPs think we know better. We’ve done more films, put in more hours, seen more action. So, on those initial calls with a less experienced director, you think (or decide) that they want to hear your “I-have-more-experience-than-you-so-just-let-me-do-my-thing”… thing. Well, regardless of whether this is their second job, the truth is someone—whether a producer or an agency exec—gave them this opportunity, and there’s money behind that decision. It’s not your place to judge or rationalize it. You’re there to support that decision—that director. Maybe they’ve only shot stills before, and maybe they’ve never used a technocrane before, and maybe it doesn’t matter. Trust comes from respect, and respect comes from listening. On my first call, I do my best to keep my mouth shut and only ask questions that will give me more to listen to. I will usually throw in one or two small ideas just to let them know I’ve digested the treatment—but not to reinvent their wheel. I recently shot a spot for a regional hospital that featured a mix of real staff and cast patients and their loved ones. We were discussing coverage and I offered that, while I agreed with the director that the doctor/patient relationship was the crux of the ad, the “loved ones” may end up being the most relatable to the audience and might afford him more editing choices. He was game. On the first day—the first setup—an amputee was taking his first steps with a new prosthetic. I framed the physical therapist coaching him with a warm smile and then panned over to the wife nervously clasping her hands in disbelief and joy. Video village was in tears, and we were on our way. It was a small but effective change that still upheld the director’s vision for the spot.

3—Better to steer the ship away from the iceberg unnoticed than look like a hero because you found the life preservers right before the collision. Directors, DPs, PDs, and producers are all guilty of this tactic—wait for it to get bad and then “look good” by flying in with a last-minute solution that narrowly avoids disaster. Yes, it may get you bonus points and recognition in that moment, but for the long-term relationship, producers and directors have more gratitude for the unsung hero offering guidance when it’s not an emergency. OK, I’ll throw myself under the bus: On Rough Night, we were pretty deep in the schedule and all trying to stay above water. We had a night exterior on the call sheet for the day where our leads, fresh from the club, were enjoying some libations around the pool. The scene had worried me for quite some time. There weren’t great blocking opportunities by our pool, and I hadn’t done a great job designing global lighting opportunities there. Lucia Aniello, the director, started rehearsing while it was still light out, and I could see the coverage trainwreck approaching. We hadn’t boarded this scene and, as per usual on this particular film, we had no time. I knew I just needed to keep the talent closer together—on similar elevations and away from that black hole on the set. In a last-minute move I pitched that everyone could be sitting around a fire pit—we’d have flattering light, the actors could interact with each other more fluidly, and, more important, I knew I could shoot it out in the time allotted. Luckily, Lucia was on board, but I essentially sent all the other departments spinning: We needed a fire pit, we needed a fire—strike that, no time to get pyro to location—we needed a fire gag, and we needed the line producer’s blessing to add some VFX fire to our foreground. Miraculously, it all came together, and the scene was “saved.” Until, of course, the next day when we got a call from the studio: Why wasn’t this a real fire? Why the VFX overages? Despite the short-term win, we still hadn’t emerged unscathed.

While writing this article I was reminded of my first foray into Things DPs Don’t Talk About; It’s hard to imagine it’s been more than three years already. Nostalgia aside, I had smugly concluded that original list of topics with “#5: I don’t want to talk about it.” I received a lot of nice feedback on the article, but one comment has always stuck with me: “#5: Knowing the difference between confidence and arrogance.” At the time I took it as a dig, and maybe that’s not how it was intended. But it’s a distinction I struggle with daily in this career. Many of us get ahead with the right blend of arrogance and suaveness. But confidence, like wisdom, is a quieter, more humble state of mind, and it really only comes from experience—and making mistakes along the way. I can’t predict the future, but I can foresee and eschew difficulties for a director or a production and that makes me valuable in a way that doesn’t translate to my Instagram stats. Confidence doesn’t mean, “I got this—stand back and watch the master.” It means I am flexible and open and can react to a wide range of situations because I’m backed by a wide range of experiences. Mix in a bit of competency, a great crew and a pleasant disposition and you’ll be headed in the right direction.

Having come to something resembling a full circle on this topic, it feels like a natural place to draw to a close. I feel a sense of gratitude to Filmmaker for offering me this opportunity, and I sincerely hope the ideas I have shared over the past three years have inspired, influenced, or, at the least, entertained you. I hope, if anything, I’ve cracked open a few doors this industry tends to keep shut, and I also hope these conversations, especially around the work–life balance and parenting, will continue with new voices. It’s been meaningful to share my experiences, and I hope in another place and time I’ll get the opportunity to share them again.

“Confidence should never be confused with arrogance. Arrogance is spelled way differently.”­­— the internet