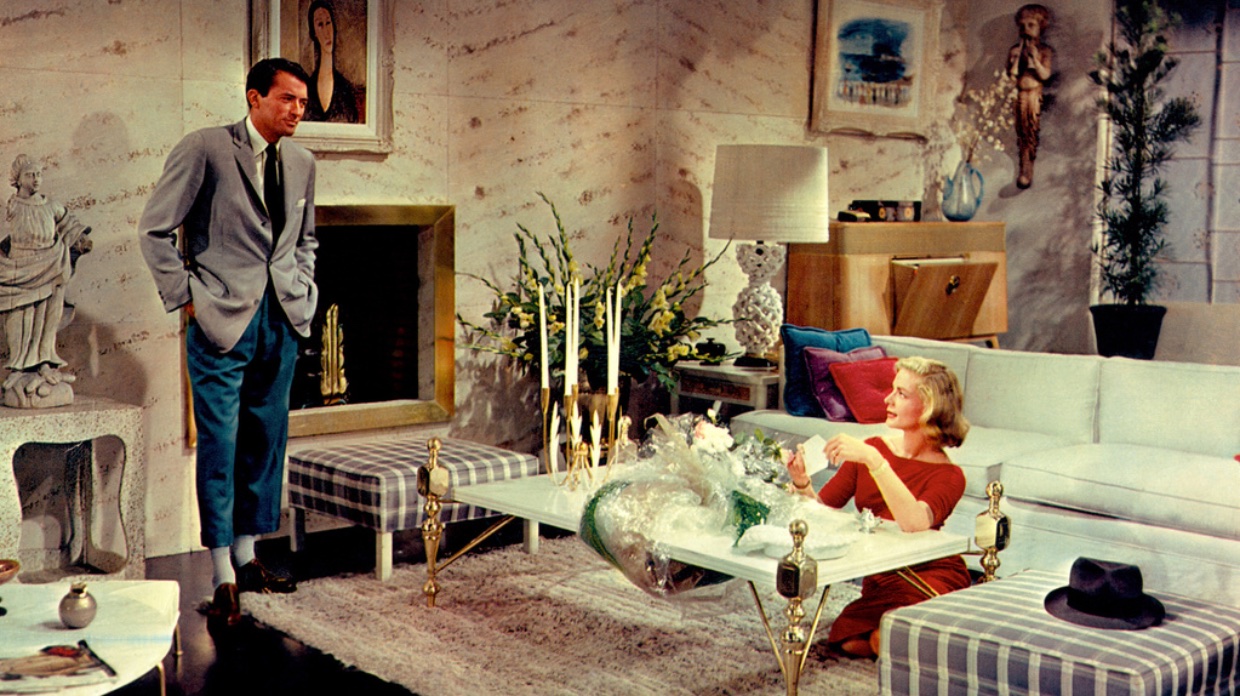 By 1957, television was competing with movies in a way that had driven studio films toward the epic widescreen aesthetic of Bridge on the River Kwai and The Ten Commandments, yet the relationship between TV and mainstream cinema was more complex than that of straightforward opposition in terms of style and scale. Although spectacles like those of David Lean and Cecil B. DeMille were designed to draw audiences to theaters for experiences they couldn’t get at home, the fact that older films from the ’30s and ’40s were suddenly accessible on the small screen gave some viewers a thirst for a more old-fashioned form of storytelling –- the bloat of movies like Around the World in Eighty Days and Raintree Country was a lot less pleasurable than the more concise, elegantly structured pleasures of the old Thin Man movies or Howard Hawks and Jack Conway newspaper comedies. Hollywood’s solution was an attempt at merging the old stories with the new aesthetic developments, mounting Cinemascope and VistaVision musical remakes of everything from The Women (rebooted as The Opposite Sex) and The Lady Eve (The Birds and the Bees) to The Philadelphia Story (High Society). The best of these unwieldy hybrids, Vincente Minnelli’s Designing Woman, is now available from Warner Archive as a gorgeous Blu-ray that beautifully showcases one of the last gasps of high Hollywood style. A loose remake of Woman of the Year, it’s a light romantic comedy given the lush, expensive MGM treatment, as sportswriter Gregory Peck and fashion designer Lauren Bacall stumble through their compatibility issues and misguided jealousies against the most sumptuous studio-designed backdrops imaginable. No one packs a Cinemascope frame like Minnelli, and Designing Woman is a master class in using décor to express character; the production design in Peck and Bacall’s respective apartments is astonishing in its detail, and Minnelli’s exquisite, precise camera movement and compositions contextualize the characters in their environments with a visual wit and clarity that was rare in his time and is all but nonexistent now. In lesser directors’ hands the delicacy of George Wells’ Oscar-winning script would probably collapse under the weight of all the lavish furnishings and fashions, but Minnelli perfectly calibrates every element of the frame to construct a movie that’s as light in its sense of romantic comedy as it is dense in its mise-en-scene.

For a look at a quintessential example of the kind of Cinemascope event movie that the studios were placing their biggest bets on in the ’50s, one need look no further than another new Warner Archive release, Seven Brides for Seven Brothers. Helmed by Stanley Donen, the only filmmaker of his era to rival Minnelli for the title of greatest musical director, it’s an eccentric experiment: an outdoor Western musical designed to take full advantage of the new ’Scope technology, yet one which was shot almost entirely within the confines of the MGM backlot. It has a very incongruous tone as a result — it’s expansive and claustrophobic at the same time — and its theatricality is as outdated as its retrograde cultural attitudes. Yet it’s a thoroughly fascinating time capsule, with Donen’s usual flair for vivid color and athletic choreography intersecting with the expressive possibilities of the anamorphic frame to yield extremely dynamic results. Perhaps understandably, this exceedingly odd movie wasn’t considered a hot prospect by MGM executives at the time — they put more of their money and energy into movies like Jupiter’s Darling and Minnelli’s Brigadoon — but it was a smash hit and Oscar contender that put Donen on the map as a solo director after co-signing On the Town and Singin’ In the Rain with Gene Kelly. In keeping with the practice of early Cinemascope movies, Donen simultaneously shot a “flat” version with alternate takes to be used in theaters not yet equipped with wider screens and anamorphic lenses; this version is included on the Blu-ray along with the ’Scope theatrical version and a number of extra features, including an excellent commentary track by Donen. Also highly recommended from Warner Archive this week: Calm Yourself (1935) and Absolute Quiet (1936), a pair of films directed by George B. Seitz that the label has released on DVD. They’re both models of narrative economy, clocking in at around an hour and ten minutes each; Seitz’s specialty was a rip-roaring pace and razor-sharp narrative clarity that enabled him to manage multiple subplots and supporting characters in a compact time frame without missing a step. He directed over 100 films, but Calm Yourself and Absolute Quiet are two of his best: the first a hilarious comedy about a guy who establishes a service for people who want to pay him to do their dirty work; the second an almost ridiculously elaborate melodrama about a plane crash that forces a wide cross-section of characters (including a governor, a pair of romantically entwined criminals, a reporter, a millionaire, and the millionaire’s former mistress) into close proximity. Seitz, who is best known for directing a bunch of Andy Hardy movies and writing serials like The Perils of Pauline, is one of those filmmakers who deserves to be better known, and these two titles are a great place to start exploring his work.

One of the best series on television reached its end this week, as The Fosters capped off five groundbreaking seasons with a three-night finale. Created by Bradley Bredeweg and Peter Paige, The Fosters began as an intimate portrait of an unconventional family and expanded and deepened to become a cultural touchstone, an essential reflection of and commentary on the times in which we live. Over the course of its five years The Fosters has addressed virtually every relevant social change and political issue imaginable, ranging from marriage equality and racial profiling to immigration, the privatization of public services, and the role class plays in our legal system and in society at large, but the show’s genius lies in its ability to do so with all the nuance and sophistication that our public discourse so often lacks. Angry and passionate yet committed to civility and empathy in a contentious era, it’s one of those rare series that started strong and only got better and better — the series finale, written and directed by Joanna Johnson, caps everything off with one of the most emotionally resonant and meticulously structured hours of television I’ve ever seen. Juggling relationships and issues that have grown increasingly complex over the course of five years, Johnson keeps everything in perfect balance, her camera unerringly honoring the right point of view at every given moment and her script striking just the right note of bittersweet resolution. For those of us who have been following the series since its beginning the finale is an almost overwhelmingly affecting experience; standing on its own, it’s a flawless hour-long piece of visual storytelling. It’s currently available on demand and on multiple streaming platforms, including the Freeform app.