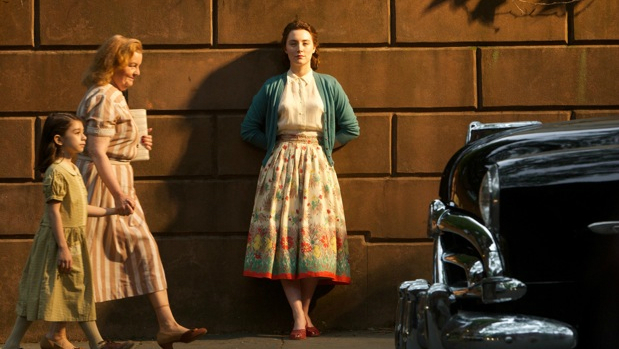 “Sometimes it’s nice to be in a place where everybody doesn’t know your auntie,” her heavily made up, peroxided cabin mate tells unadorned Eilis Lacey (Saoirse Ronan) on the latter’s maiden crossing from Ireland to the US. It is 1952. Eilis is headed to Brooklyn, home to thousands of Irish immigrants. Having made the trip before (and hardly a maiden), the brassy young woman offers advice on comportment at immigration to avoid quarantine and other hazards. She proceeds to decorate the face of the pasty girl, a withdrawn naif who insists on not ending up resembling a trollop. “Looking like a tart won’t be a problem,” the self-appointed Henrietta Higgins assures her, implying inherent blandness on the part of the unworldly girl and perhaps a bit of her own street cred.

In the deeply affecting Brooklyn, a British/Canadian/Irish coproduction directed by Irish-born John Crowley (Boy A), Eilis embarks on a picaresque journey from her home village of Enniscorthy, County Wexford, in southeast Ireland — which just happens to be the birthplace of the source novel’s masterful author, Colm Tóibín. The trip is a hodgepodge of anomalies. She comes across both light humor and serious, perhaps religiously-rooted empathy; prim behavior and verbal putdowns, which, no matter how bitchy, reflect a cultural penchant for colorful language; nostalgia and attachment; deep melancholy and glib joyfulness; and encounters with the poor and uneducated as well as the sophisticated and privileged.

The brew rings as Irish as the striking Celtic crosses that dot her town’s cemetery. Oppositions enrich the dramatic impact of the transformative process the clueless Eilis undergoes in under a year from her solo embarkation in windowless steerage through a series of disheartening, seemingly insurmountable obstacles and unanticipated breakthroughs on the path to unconscious reinvention.

The gist of the story is that Eilis’s doomed bookkeeper sister Rose (Fiona Glascott) has quietly arranged passage, a job, and a place to live for her in the titular borough, with the help of kindly Father Flood (Jim Broadbent), who lives there. After informing her Wicked Witch of a boss, Miss Kelly (Brid Brennan), that she is off to America, the cruel but not incorrect woman reprimands her. “Mothers are always being left behind in this country. Rose will be looking after your mother for the rest of her life. It’s all over for Rose.” The seeds are sewn for potent guilt later on.

Having arrived at her destination, Eilis is lonely and miserable in a boarding house full of gossipy girls who have already learned the ropes. She begins work, selling women’s notions in a large, luxe department store. The tight sisters keep in touch obsessively though detailed letters read in voiceover, conveniently using exposition to short-circuit setting up multiple scenes. 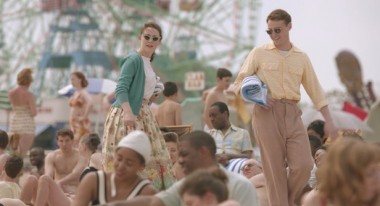 At a chaste church social, Eilis meets a sweet, handsome, amusing Italian-American, Tony Fiorello (Emory Cohen), a working-class plumber shyer than she. His absolute devotion to her is comforting. The budding relationship changes her perspective. She dresses better, sculpts her hair. Conspicuous white-framed sunglasses becomes the emblem of her crossover into cool. For the first time, she is at ease chatting with customers and relaxing at the dinner table at her residence. Newly motivated, she enrolls in a night course in accounting.

Just as things are looking up, family tragedy calls her back, temporarily, to Ireland. While consoling her devastated mother (Jane Brennan), ostensibly for a few weeks, she is courted by “the most eligible bachelor in town,” Jim Farrell (Domhnall Gleeson, son of Brendan), the only child of wealthy parents and a gentleman with the patience of Job. She even accepts a stopgap bookkeeping position in this financially stagnant town.

Eilis begins to view the village with different eyes. The wedding of her best friend Nancy (Eileen O’Higgins) contributes to the allure of a settled relationship. That she and Tony got hitched just before she left New York presents a problem. So do Mum’s unending complaints about own impending solitude. Torn over where she belongs, her familial obligations, and which man is right, she waffles about returning.

Nosy, negative Miss Kelly goes back into action, her insidious verbiage a thinly veiled threat and the catalyst for Eilis’s breaking out of a self-centered state of inertia. It makes the choice between small-town vulnerability and urban anonymity prudent but also easier. Maybe I’m reading too much into it, and this is not The Magdalene Sisters, but her unexpected reaction is a willful act of anti-authoritarianism, a rejection of abusive power for its own sake. I won’t give away the ending, but it jerks the tears. I’ll bet stone-hearted Oscar Wilde would cry.

Eilis has completed the passage to maturity. Experience of others and her own efforts have reconstructed her into an appealingly groomed woman who has claimed ownership of her life. She becomes what the supportive blonde floozy had been for her on the initial crossing, a Good Samaritan for another girl otherwise destined for outsider status, confidently passing on the same tips she got, as if some of the more frequent passengers formed a human chain letter.

Tóibín, in the book, and screenwriter Nick Hornby and Crowley in the movie, embed the narrative in a historical context. The huge diaspora — successes and casualties — and the emptiness felt by the loved ones left behind are constant backdrops to this story of a young innocent’s departure almost solely for economic opportunities. They build scenes honoring the Irish presence in America, a showcase for the working-class experience.

The most touching is a Thanksgiving dinner for homeless Irishmen at a church, where Father Flood surveys the multitudes in a makeshift mess hall, pans courtesy of DP Yves Bélanger, and proudly tells Eilis, “These are the men who built the tunnels and the bridges.” (In the same way, Bélanger shoots the lower-class family members gathered at the Irish port to wave off their family members.)

Their time is up: They are too old to go home or to find other work in the US. The cinematographer begins to shoot them at close range. These are the faces of hard times and hard labor. A soloist sings a sad Celtic ballad, one of the many reminders that keep them tethered to their Irish heritage. Crowley refuses to whitewash. At the end of the dinner, several drunk men are asleep at tables littered with empty liquor bottles.

For the record, other chunks of history not specific to the Irish pop up. Tony takes Eilis out to a vast, vacant, and flat meadow to ask if she would live with him there once the place is built up. He describes an embellished version of a Long Island soon to be developed. “It doesn’t look like much now,” he admits. Does the viewer cackle or bawl? 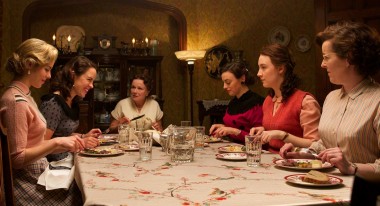 Crowley is an unobtrusive filmmaker. A few scenes in slo-mo heighten significant moments. Where appropriate, especially when Eilis leads two more and more separate lives, he accelerates the crosscutting between America and Ireland. A brief pan over black indicates a major change in setting, from Brooklyn back to Ireland. He loads the soundtrack with Michael Brook’s evocative score — lots of violin — much of it with Irish folk roots. (One jitterbug scene with an early rock song is a hoot.)

Overall, however, he shoots the movie almost as if it were being made at the time it depicts. No fancy footwork, just gorgeous, richly saturated images, whether outdoor on the unspoiled Irish coast or indoor, peeks inside working-class homes of the period, where even the browns and grays of poor man’s décor and couture do not mar the intended effect. A shout-out to production designer François Séguin and costume designer Odile Dicks-Mireaux. Call it stylized verite, but however you label it, it honors these simple people just as it does the old-timers who got lost along the way.

Ronan, whose performance is flawless, has a strong, pronounced face that can shift gear quickly and credibly. Eilis is in almost every shot. She is the film’s emotional and narrative center, yet the actress’s interpretation includes at times presenting a blank, passive expression of waiting, rather than doing. She would exist in a dramatic vacuum, though, without the exceptional supporting cast, who play unforgettable characters with faces as telling as those of the homeless, and facility with gesture and timing not unrelated to Crowley’s background as a theater director.

Ever-watchable veteran Julie Walters nearly steals the show as Mrs. Kehoe, owner of the boarding house, who renders hilarious logorrhea and tactlessness as she tells Eilis over dinner than she has oily skin and admonishes the girls for mentioning the Lord and nylons in the same sentence. The sad visage of Jane Brennan’s Mrs. Lacey could sink a ship, and her self-pitying remarks to Eilis have just the right pathetic tone. Broadbent is in his engaging effervescent mode as Father Flood. (The clergy get a lot of slack in the film, nothing but warmth and kindness. Sternness is left to the women.)

Jessica Paré plays Eilis’s boss, Miss Fortini, at the department store, Bartocci’s, with the haughtiness of a woman fully aware of her beauty who subtly reveals a tender core. Eileen O’Higgins is perfectly perky as bff Nancy. The couple who play Farrell’s comically eccentric folks are brilliant in their brief appearance. Both Cohen, who does a perfect ‘50s Brooklyn prole accent, and Gleeson are perfectly cast. (Cohen is headed toward the A-list.) All in all, Crowley and Tóibín create females much more complex and interesting than the males. Their expedition bears similarities to those taken by such admirable predecessors as Bergman, Cukor, and Fassbinder.