“There Is a Reverence On Set When the Camera is Spitting Film Through its Gate.”: DP Darran Tiernan on Westworld, Season Two 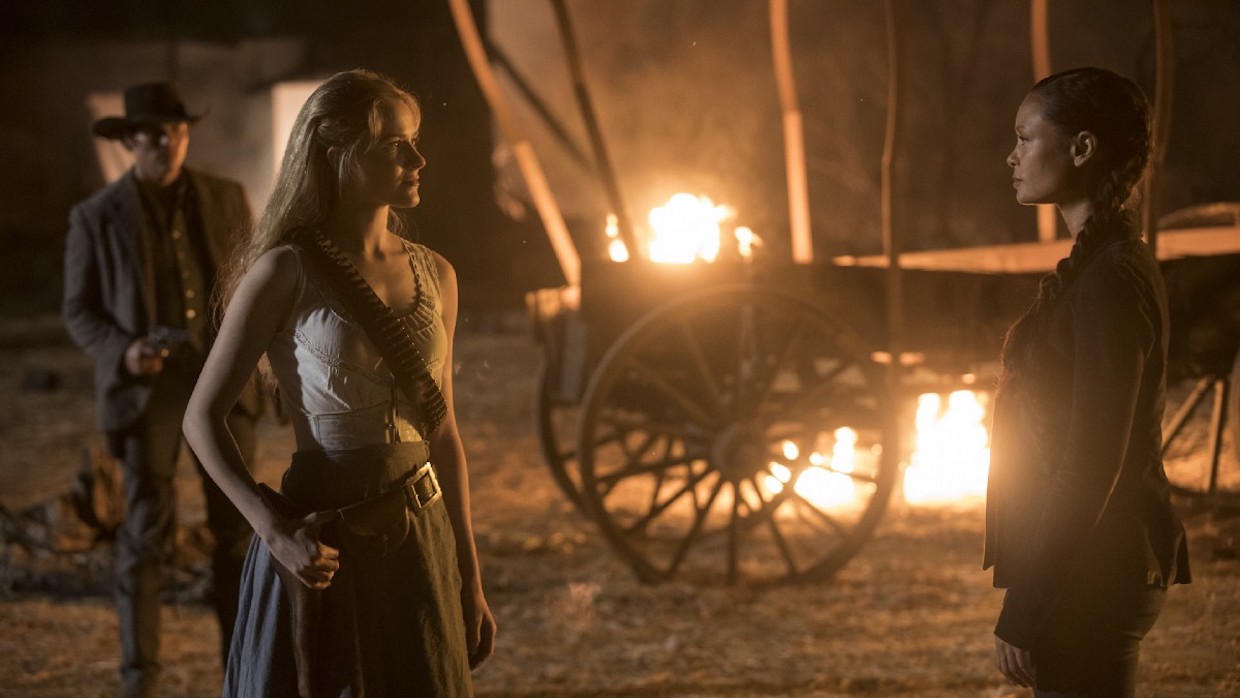 by Matt Mulcahey
in Cinematographers, Columns, Interviews
on Jun 14, 2018

When I interviewed cinematographer Paul Cameron about his work on the Westworld pilot, he likened the show’s mechanical hosts to the workers on set.

“By the end of the day, half the hosts have been shot up and need to get washed down, the lead pulled out and get re-programmed to be put back into work the next day,” said Cameron with a laugh. “It’s kind of like a film crew.”

For Season Two of HBO’s sci-fi/western hybrid, cinematographer Darran Tiernan was among the crew getting the metaphoric lead pulled out every night. Tiernan lensed five of the ten episodes, sharing the season’s DP duties with John Grillo and M. David Mullen with additional photography by Cameron. Together they expanded the show’s world outside of the titular theme park as the hosts break free of their programmed loops.

Filmmaker: As with season one, this season of Westworld was shot on film. How long had it been since you shot 35mm before this job?

Tiernan: I’ve been a cinematographer for 20 years, so I started on film and the majority of things I’ve shot have been on film, but when I got Westworld I hadn’t shot film for three years. I was actually terrified, to be honest. (laughs) I was quite nervous, but it ended up being absolutely wonderful to work on film again. I missed it. There is a reverence on set when the camera is spitting film through its gate. That’s the sound of money. Everybody is concentrated on what they’re doing. With digital, sometimes people don’t have the same self-control and they just keep shooting.

Filmmaker: Because of the nature of Westworld’s story, the second season explores not only different locations but entirely different “worlds.” You’re not as beholden to the style of the first season as you normally might be on another show.

Tiernan: Yeah, absolutely. And when we did come back to familiar locations, we treated them in a different way. For example, the behavioral labs that we see a lot in season one, when we go back in season two it’s now chaos in there. [Series co-creator] Jonah Nolan would say, “It should feel like things are broken.” We wanted it to feel like a place that you would no longer want to visit. So, even though there was a look to Westworld [in the first season], Jonah felt we could push season two in a slightly different direction. He was very supportive and encouraging [of] us [testing] a lot. So, I tested every film stock, different lenses, different types of light. Lighting technology has changed dramatically since digital came along. We’ve got so many variations of LEDs now and I wanted to test those lights on film. We projected those tests and looked at them properly and then made our decisions.

Filmmaker: What did you choose for lenses?

Tiernan: We ended up shooting season two on the Arri Zeiss Master Primes. They were just the most pleasing to Jonah, myself and John Grillo. They performed really well in daytime scenarios and night scenarios. We also carried a 75mm-400mm Fujinon Premier zoom, but that was really just used as a long lens. Jonah and [series co-creator] Lisa Joy are not proponents of zooms, because your eye doesn’t move like a zoom lens. I think that’s the correct decision for this series, so pretty much the whole show is shot on primes.

Filmmaker: And for film stock?

Tiernan: The thing that really excited me about shooting on film was the day exteriors. I’m still finding it hard to go back to shooting digital again after seeing the results of day work on film, even just with natural light and a little bit of bounce. It’s quite stunning. For the majority of the daylight scenes we used 50D ASA [Kodak Vision3 stock. For the opening of episode 3, which introduces the Raj portion of the park, we shot on 200T stock just to give it a slightly different look, then we color corrected because that’s a tungsten stock, not a daylight stock. Anytime we were doing night photography, it was 500 ASA. Once or twice I had to push it a stop [in the lab] for certain scenarios. I think John may have done it a few more times than I did. I wasn’t as brave as him.

Filmmaker: Did you have a stop you liked to live around?

Tiernan: Personally, I think spherical lenses perform really well between a T2.8 and T5.6, depending on what you want to see in the scene. I tried to maintain that. For night work, I try to avoid overlighting, so I was usually at around a T1.3 or T2. For anamorphics, I like them at a T5.6 to T8, because I think they perform better. When they’re wide open, it’s quite hard to find any kind of focal plane in the frame.

Filmmaker: Speaking of anamorphics, the very first scene from the opening episode of season two is shot anamorphic with a 2.40 aspect ratio. I thought HBO had a very hard and fast rule that everything has to be 16:9. How did you get away with that?

Tiernan: That’s a question for Jonah. (laughs) In season one, the characters are basically in this loop, but in season two things are in chaos. Jonah would say, “Things have changed.” And I was like, “Have they changed so much that we can shoot the whole season on anamorphic?” (laughs) But there is a huge budget problem shooting anamorphic on film, because you go from 3-perf to 4-perf [which results in more film being used]. Without giving too much away, the anamorphic does come back in later episodes.

Filmmaker: When developing, you used a bleach bypass process for some scenes?

Tiernan: Yes. Basically you’re skipping the bleach, so it creates a slightly contrastier look that is slightly more desaturated. We wanted to create different looks for each of the different worlds so we used that process for one of them. It’s very subtle, but it’s definitely a shift from Westworld’s particular look.

There actually used to be a process where you could dial in the bleach bypass, but those baths don’t exist anymore, so you can’t finesse it as much now as you used to be able to in those old baths. One of the most famous movies to use that beach bypass process was Seven. I remember reading interviews with [Seven cinematographer] Darius Khondji where he would say, “That particular scene was a 20 percent bypass and that scene was 80 percent.” They could photochemically dial it in to suit the scene.

Filmmaker: Jonah Nolan mentioned that Westworld was the first project to use a 35mm camera on a drone. Tell me about that.

Tiernan: Yeah, it’s supposedly a first. There’s a great company from Australia called XM2 that Paul Cameron and A-cam operator Chris Haarhoff used when they worked together on the last Pirates of the Caribbean film. They said it was amazing, because sometimes on those pirate ships they couldn’t get a crane where they wanted and the XM2 guys would set up the drone and basically do a crane shot with the drone.

For our shots we flew an [Arriflex] 235, which used 200 foot rolls. So you’ve only got about a minute and 50 seconds [worth of runtime per roll, which is a bit nerve-wracking. John Grillo shot episode 10, and I believe by that time XM2 had developed a system that allowed them to use the [Arriflex] 435 in the drone. There’s still aerial helicopter stuff this season that Jonah and Paul shot in Utah, which is beautiful. But we did drone work as well, which is cheaper than the cost of having an aerial unit.

Filmmaker: On the first season I read that crew, including the cinematographers, weren’t told about certain plot twists ahead of time, like whether Jeffrey Wright’s character is a host. How much plot info did you have at the start of the second season?

Tiernan: When I came in they gave me seven [of the ten] scripts. It’s funny that you mention Jeffrey, because one of the things that we were told was that if Jeffrey comes up to you and asks you questions about plot lines, don’t tell him anything. (laughs) He was completely unaware exactly where his character was going. I was asked not to mention anything about what was coming up, even to the crew. Jonah and Lisa want people to enjoy the show, and they didn’t want things getting out, and I totally respected that.

Filmmaker: At this point I’m only through episode 3, which ends in a large scale battle between Delos security forces and a band of hosts holed up at Fort Forlorn Hope. How difficult is that scale to achieve on a TV schedule?

Tiernan: That battle sequence was shot over three days. Most of the real big battle scenes were shot on one massive day where we had seven cameras. We shot one direction in the morning, we shot another direction mid-day and then another direction in the evening. The next day we blew up the field in front of the fort. We had to plan it like a proper battle, deciding where every camera was going to go for each sequence. It was quite a phenomenal thing to be involved in, with so many departments all in sync in order to pull it off in the time that we had.

I also remember it being incredibly hot. Evan Rachel Wood [who plays Dolores] discovered that the electricians had a heat gun, which is this device that you can point at something and it will tell you the temperature rising off it. At one point she came up to me and said, “It’s 115 degrees on the ground.” All those poor Confederados in their wool period suits. (laughs)

Filmmaker: Paul Cameron told me that during the season one pilot the camera crew had to put ice packs onto the camera’s HD taps to keep them from overheating.

Tiernan: We did that too. It’s not even easy to find that many HD taps anymore. When we had a lot of units shooting we’d sometimes have cameras with SD taps. That really brought me back to the days when everybody was looking at a really crappy SD image on the monitor and then the next day they’d see the dailies and go “Wow, that looks beautiful!” The judgment was always saved until people saw the footage. Now with Digital Imaging Technician (DIT) monitors on set everybody knows exactly what it looks like and most of the time you don’t even need to watch dailies, because you’ve already seen it all throughout the day. I actually felt a little bit lonely on the set of Westworld in the beginning of the shoot, because it’s basically just you and your light meter and your gaffer and nobody else really [knows what the final image is going to look like until the film is processed].

Filmmaker: On a seven-camera day like that battle scene, how many film loaders do you have?

Tiernan: I think we had four loaders that day and they never stopped working. I was actually surprised that we even had that many working film cameras. Keslow Camera supplied our gear and said that last summer, when we were shooting Westworld, every single bit of film equipment they had was gone on our show and a couple of different movies. That was impressive, that film had come back that strongly.