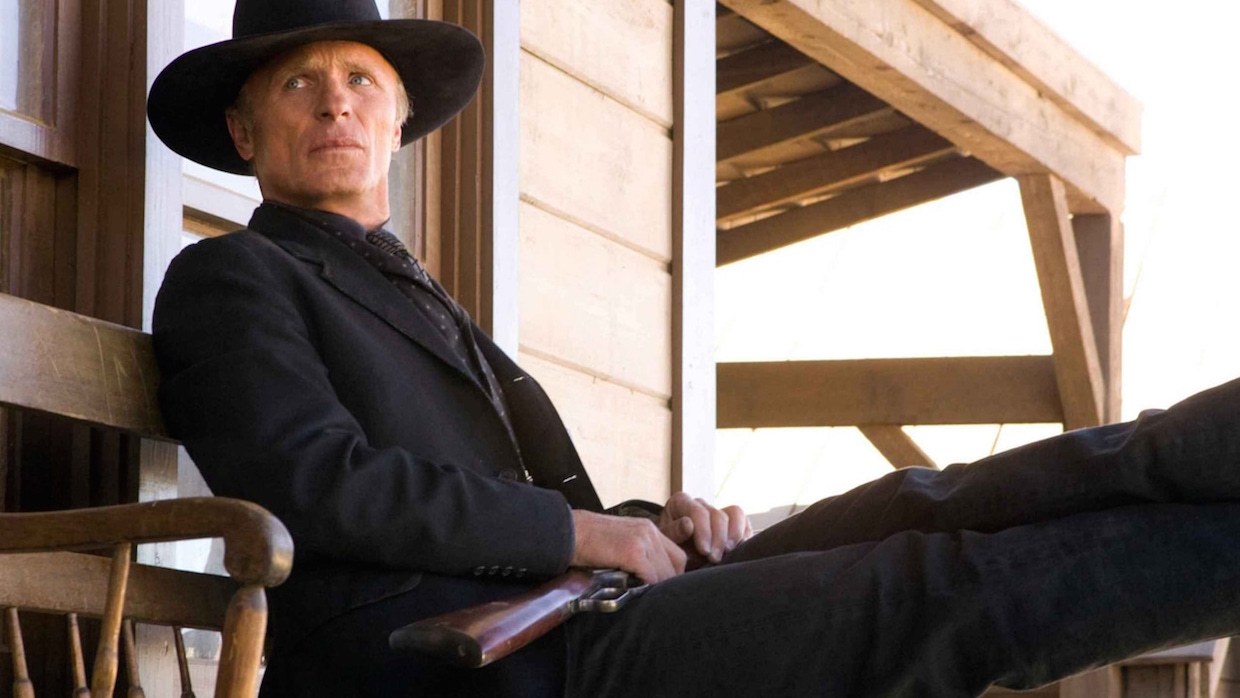 by Matt Mulcahey
in Cinematographers, Columns, Interviews
on Oct 3, 2016

Considering cinematographer Paul Cameron is responsible for a portion of the seminal digital photography in Michael Mann’s Collateral, one might assume Cameron is a proselytizer of the digital revolution. Not so — Cameron remains an ardent devotee of celluloid, extolling its virtues as an “elegant, eloquent” medium.

With the blessing of series co-creator Jonathan Nolan, Cameron sped film through the gate on the HBO pilot for Westworld. An extension of Michael Crichton’s taut 1973 sci-fi thriller about an Old West theme park where “guests” indulge their baser desires through interactions with robot “hosts,” this new Westworld digs its spurs into more existential terrain with a cast that includes Ed Harris, Anthony Hopkins, Evan Rachel Wood and Jeffrey Wright.

With the pilot episode debuting last night, Cameron – whose credits include Tony Scott’s Man on Fire and Niels Arden Oplev’s Dead Man Down – spoke to Filmmaker about shooting on 50 ASA stock, taping ice packs to video taps to beat the California heat, and how a film crew is like Westworld’s bullet-riddled hosts.

Filmmaker: You were born in Canada, but spent most of high school living with your brother in New York City. How much older is your brother and what was he doing in the city?

Cameron: My brother is 11 years older. He was a successful actor at the time doing mostly Off-Broadway dramatic plays, so I was exposed to a lot of theater and spent quite a bit of time down at the Public Theater on Lafayette Street helping backstage, hanging lights, doing props. It was a great way to spend my afternoons and evenings after class.

Living in New York I also had the chance to see a lot of movies and see a lot of crews shooting on the street. That was inspiring to me. I spent my last year of high school back in New Jersey with my family and I remember the guidance counselor asking me what I wanted to do with my life and I said, “I don’t know, maybe make movies.”

Filmmaker: What were some of the films that made an impression on you during that time?

Cameron: My brother brought me to films like Klute, A Clockwork Orange, Serpico, and All the President’s Men. One of the biggest ones I remember is The Night Porter with Charlotte Rampling. That one spun my head as a young adult.

Filmmaker: You were one of the early adopters of digital camera technology when you shot some of Collateral for Michael Mann back in 2004. Yet you’re back to working with 35mm film on Westworld.

Cameron: I’ve been fortunate to shoot quite a few [movies] on film and have taken a lot of films photochemically through laboratories. It’s an experience that I wouldn’t trade with anything. To understand the nature of exposing and developing film for various visual enhancements is a great learning tool. Even in the digital capture world, I still refer to a lot of the looks and approaches in a photochemical way.

Filmmaker: So much of the look of many films shot digitally isn’t actually baked into the original image. For example if you’re shooting Alexa in LogC, you need a LUT so that you’re not monitoring with a flattened image on set. When you’re shooting 35mm, what is the image like that you’re seeing on the monitor?

Cameron: Specifically for Westworld I had Arricam Lites retrofitted for HD taps. Quite frankly, if directors and everybody else saw the video taps that we used to use on film cameras they’d flip out. Jonathan [Nolan] is actually very experienced with shooting film and looking at classic video taps, but still I thought it was important to establish a set protocol to get a better image for both Jonathan and various department heads so that they could see what we were doing. We dug up a bunch of video taps from around the country and put them on the Arricam Lites. The problem was we were shooting in Santa Clarita, California in the middle of the summer at high noon, when it’s about 195 degrees. So we tended to have a few problems with the HD taps. Just picture these Arricams with ice packs wrapped around the video taps all the time to keep the temperature down. (laughs)

Filmmaker: I’ve seen people wrap viewfinders in those “hot hand” packets in the winter, but ice packs are a new one for me.

Cameron: It was my first time wrapping a video tap with an ice pack for sure. (laughs)

Cameron: Yeah, we shot spherical with 3-perf 35mm film and Cooke S4’s as the main lenses. For flashbacks and dream sequences I also used a set of Canon K-35s from Keslow Camera that were uncoated and gorgeous. Then we used a few Fujinon Premier zooms for a lot of the work in Moab, where the park is set.

Filmmaker: It’s too bad a 2.39:1 Scope ratio wasn’t an option because those Western vistas seem to scream out for it.

Cameron: It would’ve been great to shoot widescreen for sure, but I guess too many people complain that there’s something wrong with their televisions [when shows are letterboxed]. (laughs) But it’s fabulous that HBO and specifically Jonathan were supportive about shooting film. It was one of our quickest conversations ever in a meeting. We determined we were going to shoot film in the first 30 seconds.

There’s a lot of fabulous work being done with digital capture. I’m doing a film digitally right now that’s coming out quite well. But there’s been such a wave in the industry that digital is replacing film to the point that laboratories are shutting, and there’s less stock from Kodak, and Fuji doesn’t produce any film stocks at all. And [that wave] was partially started by myself (laughs) on Collateral shooting with Sony F900’s and establishing the possibilities for digital capture in a major theatrical picture. But in Collateral I didn’t do it thinking, “Now we’re going to change over to digital.” The path was never, to me, meant to take away film as a creative choice. You’ve got directors like Jonathan and his brother Christopher (Nolan) and Scorsese and Tarantino who are still supportive of shooting film and there’s a reason for it — because it’s an absolutely fantastic medium.

Filmmaker: You shot the pilot back in the summer of 2014, at which point Fuji hadn’t produced new stock in over a year. Was there still any unused stock around to even give you that option?

Cameron: I believe I tested Fuji stocks for Westworld. I faced that before way back on Man on Fire (2004), when we literally bought the last bolt of Velvia reversal film from Fuji in Japan. That was kind of the first indicator to me that things were changing a bit. The loss of Fuji as a 35mm film manufacturer was a big blow. Certainly the reduction of production of stocks by Kodak and the lack of development for new stocks is a big blow. It’s a shame because it’s such an elegant, eloquent medium that has worked for so many years to tantalize and entice people.

Filmmaker: What stocks did you ultimately use for Westworld?

Cameron: We used Kodak 5219 500 ASA for the night interiors and exteriors. I used 5245 for day exteriors and day interiors and that’s a beautiful 50 ASA stock. Using the 50 ASA stock presented challenges in locations like the saloon, which had these big windows. We’d be shooting at high noon in the summer in California, where the exposure is extreme outside and then you’ve got this rich, beautifully luscious interior. There wasn’t the possibility of ND-ing windows or netting things down for the exteriors, so we had to come up with a system for the saloon and other day interiors that would raise the light level to an extreme volume to compete with the exterior light. When there’s a lot of volume of light, you tend to trade off quantity of light for quality of light. Not making that tradeoff was a big thing for me.

In a location like that a lot of people may have just gone in and loaded up a softbox with downlight to bring the light level up, but then the light would have no direction to it whatsoever and for me direction of light is incredibly important. So we had this square rig with maybe 24 [Arri] M40s on it with Chimeras. We tended to use the Chimeras on the big wide shots and then on the close-ups we’d rig diffusion underneath the rig.

Filmmaker: I can’t recall ever seeing a Western where there’s so much contrast in the image and the blacks are so rich, even on sunny exteriors.

Cameron: That’s the photographic style we were after and that’s also from using that 5245. It’s a very contrasty stock. Jonathan was very supportive of a rich cinematic look and I just tried to keep it rich in the blacks as much as I could and deepen the shadows, both for the day exteriors and the interiors.

Filmmaker: Where did you shoot the western town scenes?

Cameron: At Melody Ranch, which was built [in the 1910s] and was photographed quite a bit through the 1950s. It was obviously laid out by cinematographers and production designers. They knew where the sun would come up and go down and they built the town with light in mind. We embraced that and, with the support of Jonathan and the AD team, we scheduled our exteriors at the right time of day. Typically we’d look east for two to four hours in the morning and in the afternoon we’d look west two to four hours.

Filmmaker: That scheduling is important in the pilot because the episode establishes the repetition of the resort’s routine. The hosts set each day in motion the same way, until that loop is altered by the guests, unusually in some violent manner.

Cameron: Part of the pilot is that it does have this repetitive nature. The day starts and the train arrives. The characters walk down the same street and say the same thing to the same person every morning. The same kid runs across the street. The piano starts to play. There’s a cadence to the park — the monotony of it mixed with the unpredictability of it all — and then by the end of the day half the hosts have been shot up and need to get washed down, the lead pulled out, and get re-programmed to be put back into work the next day. It’s kind of like a film crew. (laughs)