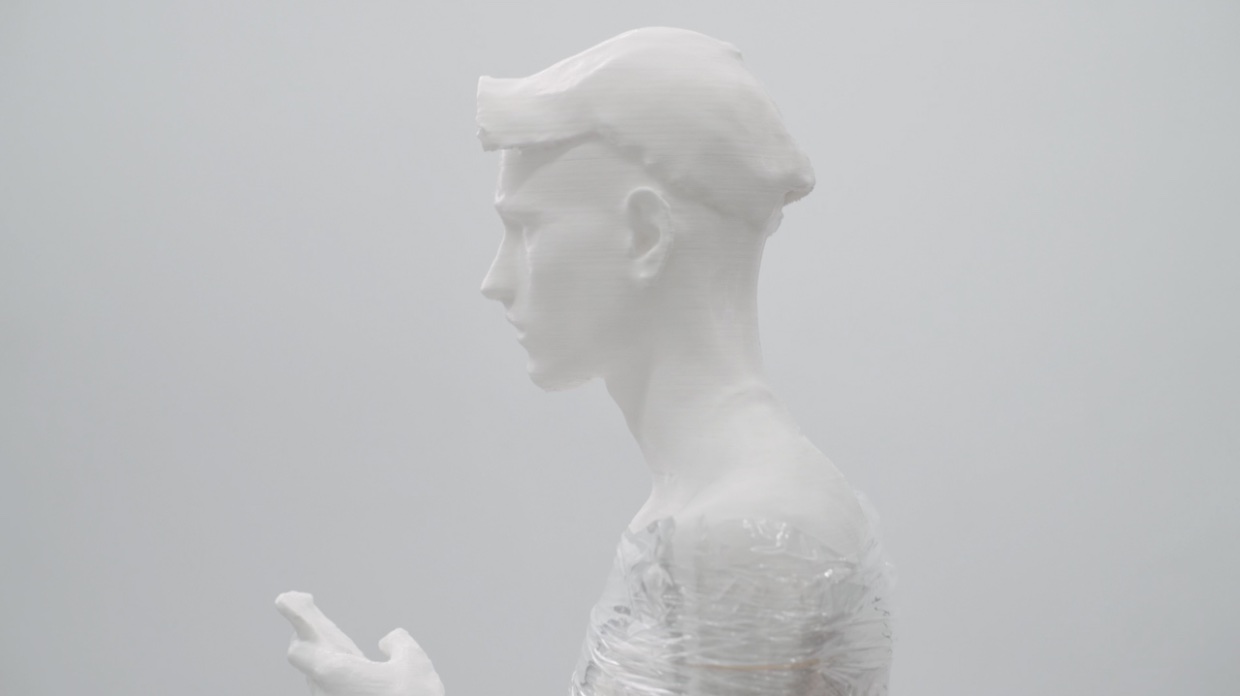 by Sarah Salovaara
in Directors, Interviews
on Jul 10, 2018

The unofficial centerpiece of Berlin’s Xposed International Queer Film Festival, Drew Lint’s M/M takes a decidedly unique approach to the identity-swapping thriller. Somewhat reductively categorized as a gender-reversed Single White Female, Lint’s feature debut is a near dialogue-less delve into the darkest recesses of obsession. Matthew (Antoine Lahaie) is a French-Canadian new to Berlin who becomes increasingly fascinated with Matthias (Nicolas Maxim Endlicher). The Berlin-based, Ontario-bred Lint interrogates Matthew’s subsequent identity assumption with hypnotic and occasionally fantastical vignettes, set to the thrums of appropriately dissociative techno. Where films of a similar set-up may stop short of any sort of thesis, Lint prefers to pry issues of toxic masculinity and queer sexuality, without a hint of didacticism. Filmmaker spoke with Lint about the challenges of filmmaking away from home and the state of contemporary queer cinema.

Filmmaker: Age-old adage “the city is a character in the film” aside, how much of M/M was born out of your experience as an expat in Berlin? Had you considered making a version of it before you moved?

Lint: M/M certainly wouldn’t exist in its current form had I not moved to Berlin. I was working on some ideas for a new project while I was still living in Toronto. Most of the main elements from that initial period made it into the film. I knew I wanted to explore identity as a general concept and work that out with two characters that mirrored each other visually. And that there would be a pool. The first scene I wrote was the dream scene, where Matthew watches Matthias swimming in the pool. Otherwise it was very unformed at that point.

The film really took shape once I moved to Berlin and began making notes about my early experiences living there as an expat.  The story of someone new to a city reshaping their identity was very relevant to me at the time and I think remains relevant to life in Berlin, given that the city’s creative sector has such a transient population.

I love to travel and I’m really inspired when visiting new places, so being alone in a new city served both as inspiration for the story and also really helped to focus my ideas and get that story out. The script began to take on characteristics of the city. It became an intrinsically Berlin story.

Filmmaker: What were some of the more practical production challenges you encountered when filming in a foreign country for the first time?

Lint: We made this film with a very low budget, so production was very challenging for financial reasons. Our cast and crew were amazing and really committed fully to making the project a reality, which I can’t thank them for enough. That really saved us.

On one hand, yes there are certain challenges to shooting outside your home country. You’re forced to make adjustments to local customs, which can be annoying when you’re used to working a certain way — i.e. stores are closed on Sundays, most cars are standard transmission, there are few late-night food options, some people don’t speak English, that kind of thing. Our DOP, Ann Tipper, and production designer, Zazu Myers, both came to Berlin for the shoot, so a lot of key players were from out of town. On top of that, Karen Harnisch, our producer, couldn’t be in Berlin for production. That meant she was producing remotely with a six-hour time difference. We had line producers working on the ground in Berlin filling in the gaps and Ann and Zazu stepped in to take some producing responsibility as well. We were in fairly constant contact with Karen via text, FaceTime and long distance phone calls.

On the other hand, Berlin also offers a lot to low-budget indie productions. I think we actually benefitted more from those positives in the end. There’s a DIY culture present here that gives the impression anything is possible if you will it into existence. People are willing to get involved with a project if it sounds interesting. We benefitted a lot from the kindness of strangers (and friends, for that matter). In general, the police in Berlin tend to be pretty lax with small productions. That said, we did get kicked out of one location by the cops. I guess that counts as a practical production challenge. And another long-distance phone call to Karen.

Filmmaker: The grey buildings and skies of the city are reflected in the film’s look, which tends to favor a restricted pallet. Can you speak about composing M/M’s specific aesthetic?

Lint: Ann and Zazu and I worked pretty closely to build the look of the film. I really wanted to evoke the feeling of early winter in Berlin, when the days are short and the skies can have a heavy, ominous feeling. It was important that the aesthetic of the film convey that claustrophobic atmosphere. We also wanted to make an environment that justified Matthew’s alienation and pointed toward his mental state. There are a lot of shots with strong, graphic shapes that bear down on Matthew. The characters often appear to be completely alone in the city, wandering through desolate greyness.

The contrast of soft skin and hard man-made materials is another visually important element that we created to further the feeling of the characters’ alienation. Statues figure prominently in a number of ways, contributing to that hard/soft motif and playing with the idea of creating identity. Sleek surfaces with metallic sheen are everywhere. I think M/M offers an image of an environment that is unmistakably Berlin, but also a view of the city that’s rarely communicated visually.

Filmmaker: The film takes a Bressonian approach to dialogue and performance — at times it functions almost as a silent film. Was it always so stripped down or did you come to this decision in the edit?

Lint: It was always intended to be very stripped down, although during the editing process we stripped it down even further by eliminating the dialogue from a couple of scenes. Film is a really powerful medium in a lot of ways. One of those ways being that a lot can be communicated by combining certain images together. The inclusion of certain repeating visual or sonic motifs can say a lot. They start to function as a language on their own. There’s a lot more at play than just the things that come out of the characters’ mouths.

And I think the lack of dialogue further pushes that feeling of isolation and also helps to illustrate the process of objectification of the characters that’s happening in the film.

Fortunately Antoine and Nicolas were also both able to convey a lot with their bodies, so a lot of the story is communicated via movement and facial expressions. Their animalistic fight scene contains no actual dialogue, but I think experiencing that scene as a viewer it feels like you’ve witnessed an argument. They had a really interesting dynamic that I think comes across quite viscerally without the need for dialogue. Often desire is communicated by the things you don’t say.

Filmmaker: The relationship between Matthias and Matthew is reminiscent of an oft-depicted dynamic between women, in films like Persona, Mulholland Drive, Single White Female, etc., but one that rarely assumes an explicitly sexual nature. Were you working off of the identity swapping in any of these films in a corrective way?

Lint: That’s a really interesting observation. I was inspired in general by the identity swap thriller genre. I wanted to queer it by taking familiar tropes and turning them upside down. So there are strong elements from Vertigo and 3 Women there, but they’re scrambled and repurposed to construct this fairly experimental narrative that plays out between two gay men. I think maybe it says something about my own identification with female characters that I connect to this generally female-focused genre and wrote a meditation on the pitfalls of masculinity. The facets of masculinity I wanted to explore (the performative nature of the masculine and its relation to group dynamics and the search for identity and community) are so intertwined with gay male sexuality it was essential that be part of the film. I think this kind of queer context demands that the film be explicitly sexual. It’s true though, in all these classic examples of identity swap thrillers the characters don’t quite play out their desires, taking them “all the way,” so to speak. I guess I wanted to see that more fully realized on screen in some capacity.

Filmmaker: There was an article in Vulture recently about how the term “queer film” is becoming increasingly sanitized via its mainstream appropriation; it’s now applicable to any neatly packaged three-act movie about a gay character. I’m curious how you feel about the current state of the “sub-genre,” especially given the fact that M/M is resoundingly queer in its approach to structure, tone and content.

Lint: It’s true, “queer film” has really been adopted as a catchall for any film that has LGBTQ content. We’ve come a long way from New Queer Cinema. I think it’s great that there’s a growing audience for films telling stories about LGBTQ characters, but a lot of them really don’t qualify as “queer” in the true sense of the word, do they?  That’s part of what made me want to make M/M in the first place. I’m interested in experimenting with traditional narrative structure and methods of storytelling by appropriating classic cinema tropes and then reversing expectations.

I think the world needs more truly queer films, radical in form and content.  That’s what I’m missing.  I guess for the time being I’m going to have to make them myself.  That’s not to say I’m the only filmmaker doing that, but in a time when conservatism appears to be on the rise, I think it’s especially important to make films that challenge societal norms and ideas.  I think it’s my duty to stir things up a bit.