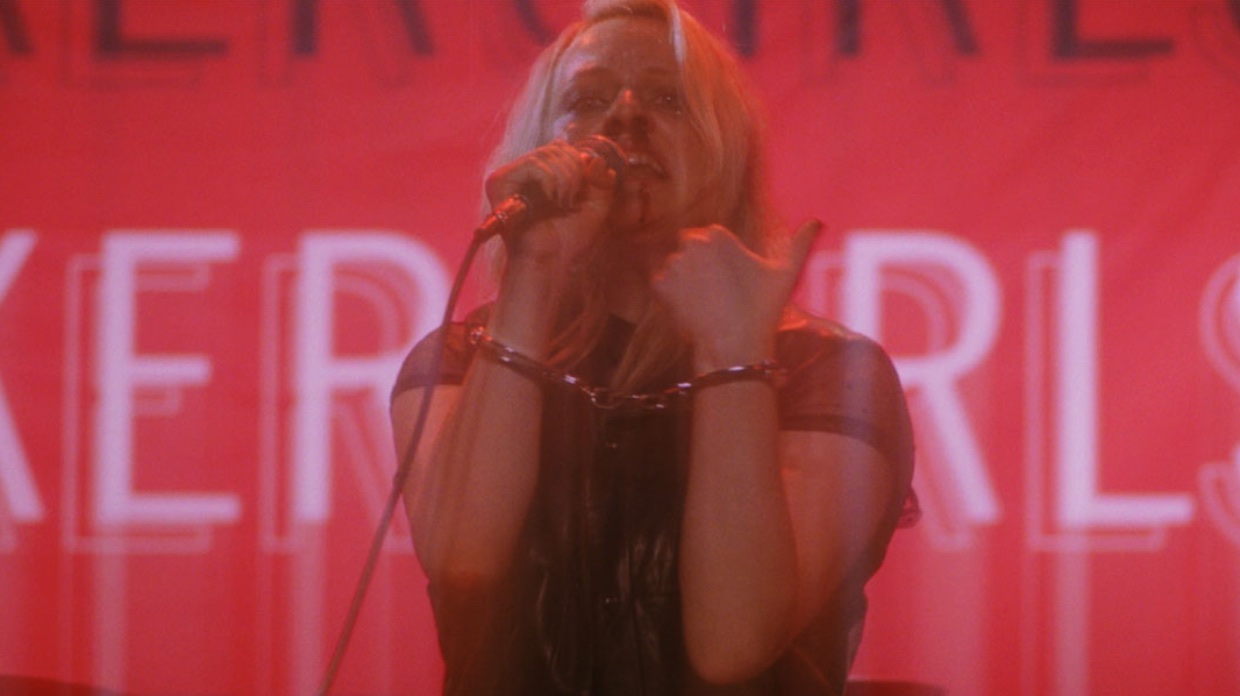 World premieres x3, appraised in greater haste (and mercifully smaller word counts) than usual, starting with this morning’s viewing. I woke up to a slew of tweets saying that the first half of Alex Ross Perry’s Her Smell is an impossibly testing experience that dares audiences to walk out; now that I’ve seen it, it appears people have a remarkably low tolerance for abrasion. Five real-time scenes tracking the disastrous, inevitable rock bottom and sort-of rebirth of ’90s riot/it-grrl-turned-serious-hot-mess Becky Something (Elisabeth Moss), Her Smell strays noticeably outside of ARP’s normal comfort zone, in which people are reflexively, casually bruising and vicious to each other, superficially buttressing their uncalled-for hostility with an arsenal of choice words. There’s certainly plenty of that in the first three scenes of Her Smell, which track Becky at the moment of her absolutely final implosion (first before a show, next in the recording studio, and finally prior to a performance that doesn’t come off). Dialogue does not emerge immediately, the soundtrack is loaded with non-diegetic sounds amplifying the unrest, and Sean Price Williams’ camera is mobile and fluid in ways that Perry’s last few films, mostly visually locked-down, were not. When people do start talking, yes, there’s a lot of dazzlingly mean put-downs: we haven’t strayed completely off the reservation, but the manic energy and formal twitchiness is new.

The fourth scene represents a big risk; once Becky’s definitively torpedoed her career, it’s time for sobriety and a retreat to her countryside house. This segment is self-consciously quiet, placing all its emotional eggs in the basket of having Becky sing not one, but two, songs in full, where all her sublimated emotions of regret and reckoning come out. Watching this unfold is not as emotional as it seems to be intended; it’s fascinating to watch ARP try to make a scene categorically unlike anything else in his work, and I’m all about risk-taking, but I’m not sure it comes off. (That said, big ups to Moss — whose Woman Under the Influence show this entirely is, and who absolutely nails it — for playing the piano herself, in medium-shot, the first time I’ve seen someone not fake it since Rooney Mara in Carol.) But everything snaps into focus in the final segment; I had kind of checked out and assumed the first half would be all that worked for me, but in its final moments Her Smell becomes a totally emotional experience in a way I didn’t see coming. Substance abuse is tough, sobriety is harder, and all hard-won victories have to be questioned; still, one moment of not-fucking-up is always to be treasured, even if it’s no guarantee that the course will be stayed going forward. In short: I liked the movie, and didn’t find it nearly as trying as its quickly-developing reputation would suggest. (Also, opening your movie with a cover of the Only Ones’ “Another Girl, Another Planet” is an excellent way to immediately get on my good side. I’m easy sometimes.)

Benjamín Naishtat’s Rojo is the crowd-pleasing TIFF world premiere that not enough people seem to know about. A ton of films I enjoy would be tough to recommend to non-cinephiles: I genuinely think they’re fun, but their formal severity can be a torture machine for many. Rojo isn’t like that; it’s a splashy ’70s period piece, visibly expensive in its vintage clothing/cars/assorted trappings, with a beautifully saturated color palette and lots of good jokes. This is not what I expected from Naishtat; I didn’t see his debut, The History of Fear, but did admire his last film, The Movement, a visibly cheap movie shot in under two weeks in the desert, tracking a separatist political cult as it implodes, Maoist self-criticism style, in low-res-ish black and white. It was an impressively fervid work, but nothing about it suggested that, given the opportunity to scale up, Naishtat would take it easy on the audience.

Surprise! Rojo‘s logline is not a barrel of laughs: in Argentina, on the brink of a right-wing coup, a really unpleasant lawyer kills a guy because he can and then commits all kinds of similarly unsavory bullshit. The movie is, nonetheless, very fun and should play well for normal audiences that don’t want to spend all day watching durational formalist gambits. This is not to be confused with stylistic anonymity; Naishtat lets his freak flag fly in the first scene, breaking out the split diopter for a shot/reverse shot exchange, which is already weird, but made even stranger when the reverse shot angle is of the speaker’s sideburn, right there in full focus. There are a lot of similar oddities throughout; the film superficially is normal, but underneath a weird heart is beating. Because of the subject matter — ’70s Latin American political turmoil, structured around an unlikeable antihero — comparisons with Pablo Larraín are inevitable; Naishtat, to his meta-cinematic credit, leads into that by casting Larraín regular Alfredo Castro. This is a very entertaining work, a rare example of a movie that’s firmly committed to a narrative throughline that totally works for me.

Finally: Louis Garrel’s A Faithful Man, which (lord willing) will be the single stupidest movie I see in my time here. I am a massive admirer of Garrel’s father, Philippe, and thematically Louis is definitely his son: this is another movie about a dude (Garrel) whose sexual impulsiveness is a problem for everybody. Basically, it takes this guy 70 minutes to figure out which of two women he should be sleeping with — which is the plot of a lot of Garrel senior’s films, but those films a) have excellent shot compositions; b) impossibly lived-in performances that don’t look like acting; and c) plausible characterization and interior psychology. A Faithful Man has none of these things: among its many, many demerits is a visual anti-style that involves shooting in widescreen, but solely to deploy a relentless, grinding array of shot/reverse shot close-ups, all cut at the same rhythm. Not since watching Andy Fickman’s You Again (one of those interminable romcoms where Kristen Bell is repeatedly humiliated for the entire running time) for review assignment have I seen this particular visual anti-strategy deployed. As far as the performances, they’re all surface and the characters act like aliens, but the movie doesn’t seem to be aware that anything strange is going on. (There’s also a cutely sassy young boy who says the darnedest things, as if we’re stuck in some kind of awful ’80s studio comedy, possibly starring Steve Guttenberg). As for characterization, don’t get me started: when Garrel’s character comes to the funeral of his ex’s husband, he wonders, in voiceover, if his former squeeze is thinking about him, and whether he should ask her if she wants to move back in together, like right this second. I have all kinds of time for on-screen male pathology, but nothing about this movie is illuminating, plausible or funny; I emerged smoldering with ill-will.