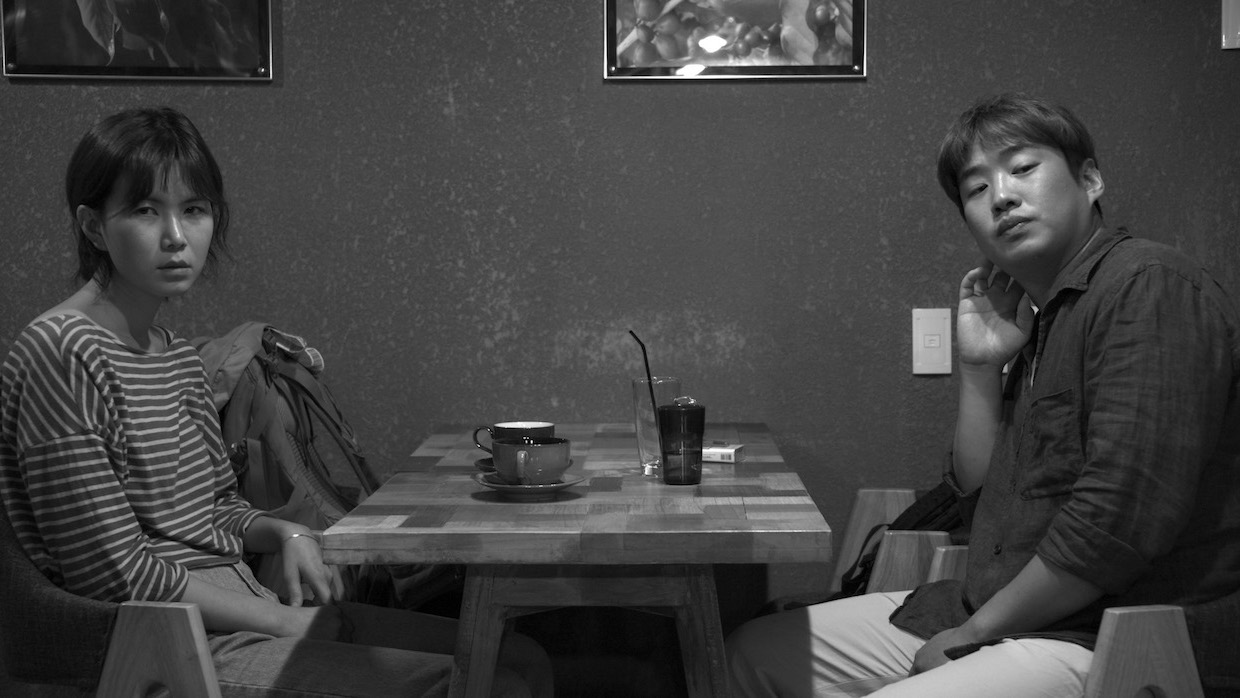 Hong Sang-soo has long been an NYFF staple; last year they showed two of his three works for 2017. I didn’t write about the one that didn’t make it in, Claire’s Camera, which is a) by far the most uncomplicatedly funny/breezy thing he’s made in a while b) nearly made me jump out of my seat with an insert cut. I can’t remember now what the cut was to; the point is, in the extremely limited visual language Hong’s codified over time, the one-time use of previously off-limits but otherwise totally normal devices really gets viewer attention. This is, of course, on some level insanity; the degree of commitment to keeping up with Hong’s work does seem inherently Stockholm syndrome-ish, leading to moments like freaking out over an insert cut. It’s these minute disruptions and refinements, in part, that distinguish one Hong film from another either as they worry over the same types of characters and plot situations. This year’s diptych, Grass and Hotel by the River, doesn’t rank among my Hong personal bests; change, though, is conspicuously stamped all over them.

Grass premiered first; even by Hong’s standards of elliptical editing, this is a cryptic work. It begins with a typical exchange at a cafe: “How’ve you been?” “I’ve been drinking.” “Me too.” A man and a woman are having coffee, and from this unpromising start it’s a few sharp, unprompted conversational leaps to her screaming that he’s responsible for a female friend’s death. Sitting nearby drinking it all in is Areum (Kim Minhee), the movie’s main connective tissue: she’s “not a writer,” she demurs, but she’s working on a screenplay, which seems to mean sitting, deliberately overhearing conversations, then speculating in voiceover on what’s going on in their heads. There are several location resets, and Areum doesn’t overhear every conversation we see; the net effect is to come in midway through several different one-on-one interactions with no before or after. Past knowledge of Hong’s films can provide some plausible conjectures about what’ll happen next (probably nothing good); still, for a good while this has a bit of a “Five Conversations In Search Of A Scenario” feel. Aside from the structural exercise of juxtaposing familiar types of characters, all in the same types of spaces, back to back, it’s hard to tell what else Grass might be wanting to get at. One of the most striking bits is wordless, in which a female character leaves a cafe, ostensibly for an appointment nearby, and walks up and down a set of stairs with great purpose but no destination until a grin comes over her face. It’s an actor’s exercise reminiscent of Joaquin Phoenix windows-to-wall bit in The Master, in which seemingly purposeless repetitive motion yields some private enlightenment.

Where earlier films would invoke classical music ironically (the tinny keyboard arrangement of “Pomp and Circumstance” opening Oki’s Movie) if at all, lately Hong’s been leaning into classical music greatest hits. Building off On the Beach at Night‘s repeated deployment of Schubert’s “String Quintet in C (Adagio),” Grass has a number of similarly familiar, well-nigh overused cues (that former staple of call-waiting, Pachelbel’s Canon among them); I might have a missed a few, but nearly all are fugal in structure, building and building on motifs without ever resolving them, which is a fine metaphor for Hong’s cyclically futile and repetitive worldview. That certainly doesn’t apply to Hotel by the River, which a) has a definitive, bleak conclusion completely unlike anything in Hong’s work b) is all shot in handheld, another first. I have absolutely no idea why this decision was made: the results look more like a parody of whatever you think the ugliest-looking mumblecore movie is than I ever imagined possible from a Hong film, and every zoom is particularly excruciating. As a way of formally heightening the difference between this and his other work, it certainly crunches; as a viewing experience, though, it immediately snapped me right out of the film and into a state of irritability that didn’t ebb for the rest of the running time. Both of this year’s productions are in black-and-white, always a reliable indicator that Hong’s in a heavy mood; I don’t necessarily mind that, but Hotel by the River struck me as lugubrious. I appear to be an outlier, as most viewers seem to prefer it to Grass. Given Hong’s manic productivity, it won’t take long to see if these movies are just how he feels in 2018 or an indication of what the next extended phase will be.