“We Should Recreate The Real World In Another Dimension”: Director Of Photography Sayombhu Mukdeeprom On Luca Guadagnino’s Suspiria 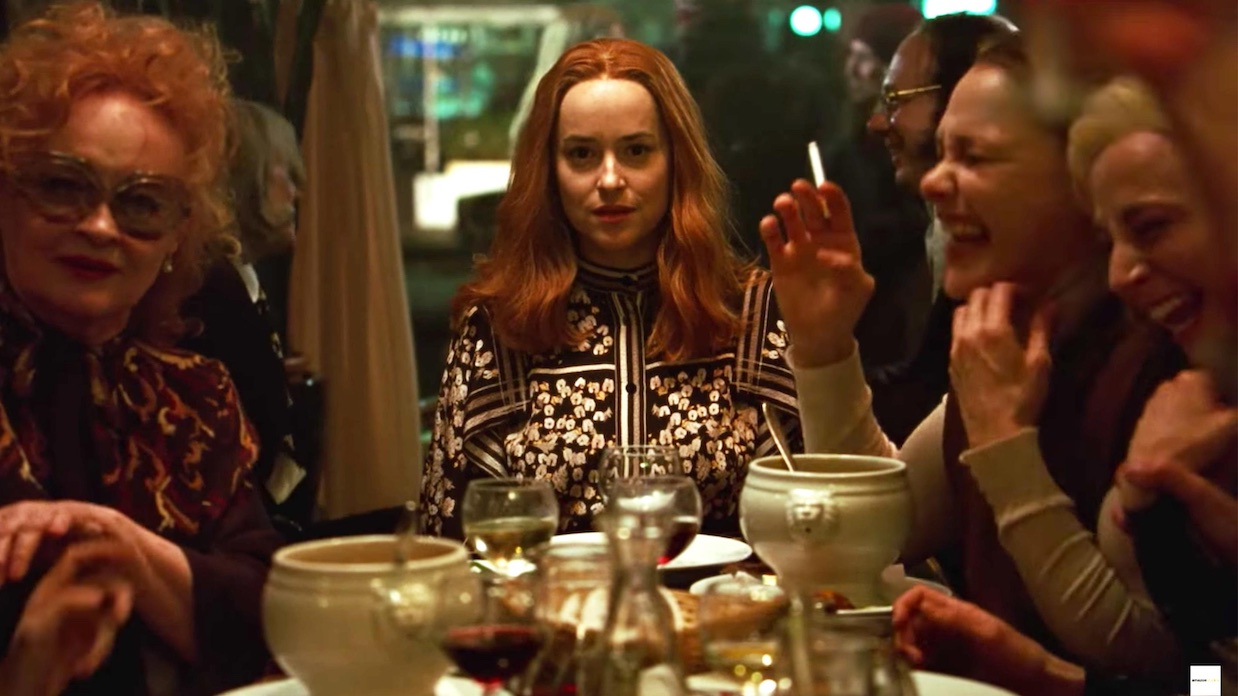 by Aaron Hunt
in Cinematographers, Interviews
on Oct 27, 2018

At the time of our Skype call, director of photography Sayombhu Mukdeeprom (Call Me By Your Name, Cemetery Of Splendour, Arabian Nights Vol.1 & 2) was celebrating the news that Nakee 2, a film he shot in Thailand last year, had just broken box-office records. He was also celebrating a friend’s wedding party in Bangkok, his choice venue for the interview, and its jolly attendees enjoyed hollering their two cents in Thai from off screen. Spirits were high.

It was midnight in New York and 11:00 AM in Bangkok. My questions were too prepared. I had mistaken Guadagnino’s complex reimagining of Suspiria to be the calculation of equally intricate pre-planning. In point of fact, it could never have been made this way. It demanded Sayombhu and Luca’s breathy openness and keen hearing. A tightly followed shot list would only have deafened them to the telling echoes resounding between the actors and environment. They chose to stay light and react, not encumber themselves and force a way. If an obstacle arose that incited change in their initial imagining of a scene, it was not a haphazard compromise of vision, but an opportunity for them to react.

So, perhaps I was deafened here by my own static approach, ill prepared to hear the cogent signals of Sayombhu’s rapid instinct and buoyant good nature. This is the result.

Sayombhu: I don’t know, Aaron. I don’t think the principle of my work has changed from Call Me By Your Name. But the work itself is more complicated. My principle is that I cooperate with people, I let things happen, I go by the environment. I think that Suspiria is a lot more complicated in its content, in its script, and how it’s already been treated. So the photographic result is the result of all these components.

Filmmaker: Do you and Luca Guadagnino set guidelines to work in within your intuitive method?

Sayombhu: So in Call Me By Your Name the thing was that I could only use one lens the whole way through. I had to. With Suspiria I had every lens. I used the equipment and the camera work of the ’70s. The dolly. The crane… And there is also the performance art aspect of Suspiria. I had to match the freedom of the art that we were framing and give the actors the freedom to perform it.

So, again, I am just matching my environment.

Filmmaker: Does Luca let you operate freely on the day then?

Sayombhu: He directs the actors. He shows me what they’re going to do, and we come to an agreement on how we should shoot it. But this is just to form the core of what we need, to fulfill a necessity. I shoot it this way, and then from there I can operate freely.

Filmmaker: Do you guys shotlist the movie?

Sayombhu: No. We follow the text. The text gives us more freedom.

Filmmaker: The compression of space with a zoom is different than a move or a push in and they’re used distinctly in Suspiria. It seems like the zoom is used more for emphasis and the moves for interruptions. Could you talk about your use of the two distinct from each other? Were zooms and moves premeditated?

Sayombhu: The zooms are my funny part [laughs]. They’re fun for Luca also. They just go “WOOF! [laughs] But I think they’re just a tribute to these ’70s movies [laughs]. But if we were too wide and we needed to punch in and couldn’t move, we would use the zoom to do it. And if they worked they worked, and if they didn’t they didn’t.

Filmmaker: What happens to a film when you present compositions from impossible vantage points? For example, your aerial and crane shots?

Sayombhu: Well I didn’t use aerial shots. If I’m looking down on them from above I’m using a very simple crane. I only used the equipment of the ’70s. The crane, the dolly, the sticks.

Filmmaker: You can always track a light back to its practical source with your lighting — it always feels natural. But you’re able to work emotionally within that through blocking. Will you always light in this way? Do you feel it is more honest?

Sayombhu: That’s correct. But also it is still lit in some way. Even though you see that there really is a practical and there is ambient light, I’ve always placed a light supplementing it off screen.

Wedding Heckler: This is my master! I learned from — [indescernible]!

Sayombhu: Sorry, my friend asked me what I was doing.

Filmmaker: Whose wedding is it?

Sayombhu: Thank you. Thank you [laughs].

Filmmaker: An example: Tilda Swinton is often blocked so that she is backlit by a window or embroidered in shadow, darker than the brighter face on the other end of the conversation. Why do you light her in this way?

Sayombhu: Everytime I looked at Madame Blanc she had the quality of mystery. I think maybe this drove me. But I think it was also affected by how Tilda carried herself, how the other actors reacted to her, and how they all reacted to the set. I don’t exactly know how it happened like this, but I think it is a combination of many factors, reactions, and environment.

Filmmaker: What is the effect of using many different focal lengths on a film versus one?

Sayombhu: When I shot Call Me By Your Name on one lens I had no idea what the effect would be. It turned out that it felt very natural, nothing felt forced, you don’t feel the camera at all. For Suspiria, due to the complexity of the material, I felt it made sense to feel the camera, and that we should be able to move closer and subtly to a close up. I needed a great range of lenses to do that.

Filmmaker: In the final sequence with Mother Markos, the camera goes handheld for the first time and begins to break free from the language it had developed — was that necessary to evoke the revolution taking place?

Sayombhu: Yeah. But it’s also for the fact that I could not put the dolly in that area, you know what I mean? So it was a technical burden. In the beginning I considered a technocrane, but they’re not fast enough. But I did not do the handheld like usual handheld. I shot it at a different frame rate, and the intention was that we’d combine the shots later to make the ritual effect.

I shot it with a whole range of frame rates. I shot it at six frames, 12 frames, 34 frames, 50 frames, even 100 frames. Then we handed it to the editing department like “Ok. See what you can do.” [laughs]

Sayombhu: I think we were starting this idea of entering the other world. We also shot this scene at various speeds to give our editor Walter Fasano and Luca something to play with.

Filmmaker: It doesn’t look like you push or pulled the film stock. Do you try to avoid doing so?

Sayombhu: I pushed it one stop. But one stop, according to my interests, is nothing noticeable. Even two stops looks clean.

Filmmaker: You’ve said you will only ever shoot on film?

Sayombhu: I do. But more so for my commercial work. Actually, at the beginning of the era I dabbled in the digital world and found that I could not use it for the movies. It did not talk to me like film did. It’s nothing to do with the media itself. It’s just me. It’s my fault. [laughs]

Filmmaker: Is there anything else you won’t do in a movie?

Sayombhu: I don’t know. I think more about the kind of content I want to work with. I choose what kind of ideologies I want to be a part of. That’s how I work I think.

Filmmaker: I’m sure you’ve worked with a director who is more rigid, who likes to stick strictly to a shot list. Are you less comfortable working in this way?

Sayombhu: It doesn’t matter. It can be that way. But, having said that, it doesn’t mean that they should not be able to work as a director. You see what I mean? It’s a totally different thing, preparing a movie and directing a movie. The best directors I know don’t work that way. As a director you can stick to the paper, but the ones who do, I’ve found, have no appearance. If they have the ability to do their director work though, I don’t care if they work in this way.

Filmmaker: Operating openly, are you ever afraid you’re operating against the interests of the film?

Sayombhu: No. To use the word “afraid” is maybe too much. I’m never afraid of things, but am I sometimes not so sure? Sure. This is normal [laughs]. This is a normal feeling to have when you make art. But afraid? Never.

Filmmaker: I know when you read David Kajganich’s script you imagined it with a muted color palette and realistic sensibilities. Did Luca also read it in this way or was it you who brought this to the film?

Sayombhu: I think we agreed. There was a really brief discussion between us regarding this issue. I told Luca I did not see color and we agreed and went on our way. I think the original Suspiria was a masterpiece, but of its own regime. I have to admit that I don’t like its narrative aspect. This new Suspiria is written very differently.

Filmmaker: Your second unit D.P Lucas Gath tells me this was quite frequently, basically, a two-camera shoot.

Filmmaker: How does that work with you? You just trust Lucas to capture what you need?

Sayombhu: Yes. I need to trust my collaborators, otherwise I can’t work —

Sayombhu: Sorry Aaron, my friend just asked me why I was in here! [maniacal laughter]

Filmmaker: How much influence should a cinematographer have over the language of a movie?

Sayombhu: I don’t know at all. Sorry, I think it’s too broad to answer. I think it depends on –. It could be anything. Come on! Too broad.

Filmmaker: Can you see a throughline in your work?

Sayombhu: Yes. I see that my work is influenced by the environment. Something like that. I don’t know. To me film is realistic. I don’t feel that we just shoot films isolated from reality. I feel that we should make the world. Do you know what I mean? We should recreate the real world in another dimension.