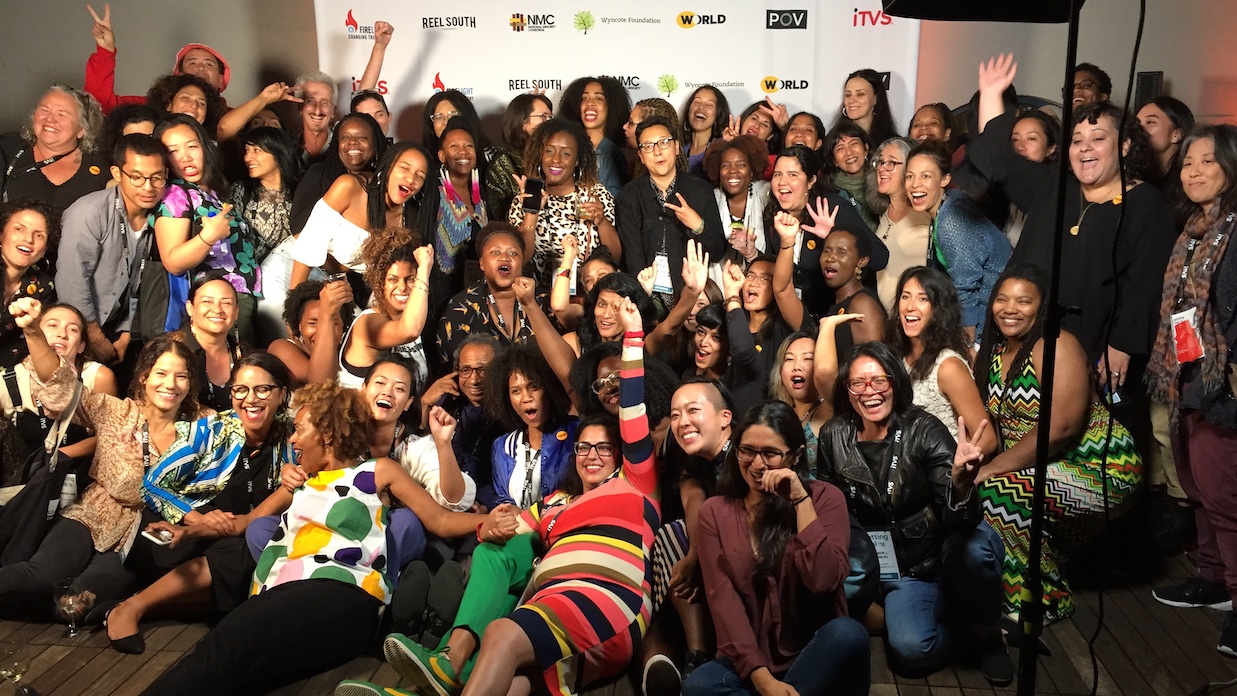 Brown Girls Mafia at Getting Real '18

Brown Girls Doc Mafia, an organization advocating for women and non-binary people of color in the documentary industry, announced today the appointment of its board of directors as well as a two-year, $105,000 grant from the John D. and Catherine T. MacArthur Foundation. The board, comprised of filmmaker Ursula Liang, Denae Peters of Film Sprout, and Nicole Tsien of American Documentary POV will work in conjunction with the organization’s Co-Directors, Iyabo Boyd and Tracy Nguyen-Chung. Brown Girls Doc Mafia was founded by Boyd in 2015 and has a global membership of over 2,400.

“Brown Girls Doc Mafia was formed to tackle a myth that has been repeated in industry conversations, hiring discussions, festival programming meetings, and funder circles: that there aren’t many filmmakers of color worth paying attention to, especially not women of color. This lack of research and semi-conscious bias has discouraged, marginalized, and isolated legions of women filmmakers of color in documentary for generations,” shares BGDM Founder and Co-Director Iyabo Boyd. “BGDM provides a nourishing atmosphere where women filmmakers of color and their projects can incubate, and women industry representatives of color can evolve in a safe place. With this expanded team, and the infusion of support from MacArthur, we’re able to pursue our priorities of community, visibility, access, sustainability, growth, creativity, and power at a higher level.”

As an organization, BGDM diverts and directs opportunities to address the unique needs of its community and challenge the antiquated norms within the documentary field. BGDM’s multifaceted, member-focused approach includes: deconstructing dominant film spaces, creating blueprints for professional sustainability, and nourishing creative brilliance. Among the organization’s initiatives are national membership events and workshops, access and visibility at industry events and on media platforms, financial literacy and sustainability for members, and creative opportunities for collaboration and career growth.

With regard to BGDM’s mission, Boyd and Co-Director Tracy Nguyen-Chung added, “we believe that it is critical for women filmmakers of color to have access to industry festival and conferences, social environments, and academic exchanges where relationships are made, ideas are developed, and potential beneficiaries are identified. Showing up in large numbers disrupts the film industry’s long standing barriers to diversity and inclusion, personifying the immediate possibility of radical change. Our initiatives are incredibly beneficial to BGDM members, but they have also proven to make a huge impact on the culture of documentary film spaces, and on how our overall community grows and improves around equity and inclusion….”

Several BGDM members will be premiering their work at the 2019 Sundance Film Festival, including: Cristina Ibarra, co-director of The Infiltrators; Crystal Kayiza, director of Edgecombe; Su Kim and Kristina Motwani, the producer and editor of Midnight Traveler respectively; Jacqueline Olive, director of Always in Season; Jehane Noujaim, co-director of The Great Hack, co-produced by Tracy Nguyen-Chung; and Nanfu Wang, co-director of One Child Nation. BGDM will hold it’s second Sundance Film Festival gathering for roughly 50 members, hosted in Park City by Kickstarter. BGDM’s funders include The Ford Foundation, 21st Century Fox, and The Dobkin Family Foundation.