After “Losing” Emily Mortimer: Director A.M. Lukas on Her Sundance Short, One Cambodian Family Please For My Pleasure 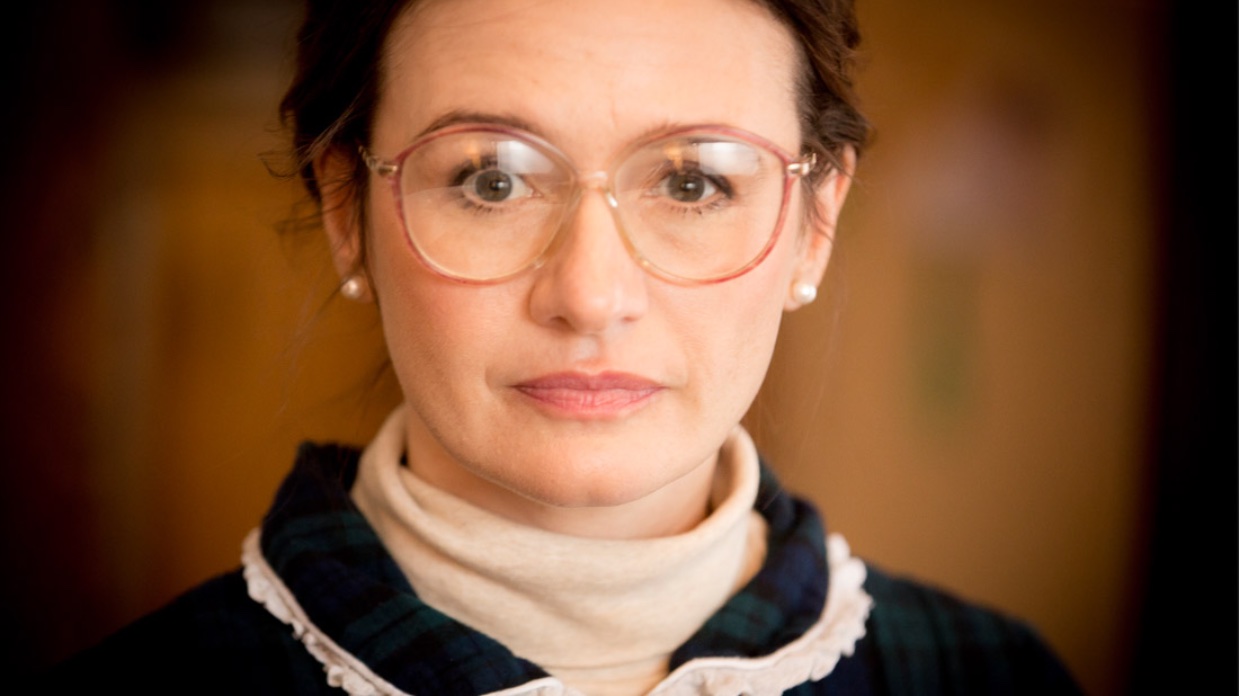 Emily Mortimer in One Cambodian Family Please for My Pleasure by A.M. Lukas (Photo: Sundance Institute)

A.M. Lukas’s short, One Cambodian Family Please For My Pleasure, based on a true story, was produced for Refinery29’s Shatterbox series and has won awards at Edmonton International Film Festival, Rhode Island International Film Festival and SCAD Savannah Film Festival. It plays Sundance beginning January 24 in Shorts Program One. Here, writer/director Lukas tells the story of the perilous song-and-dance that occurred when her star, Emily Mortimer, had to bail out of the film at the last minute — and the lessons learned from the experience. After reading, check out the short itself below.

It’s a sticky September day in Brooklyn. Perched above hot pavement across the rickety table of a sidewalk cafe, your cinematographer Meena Singh sips iced coffee as you wait for your production designer Amy Williams to join you. In 48 hours you’re all getting on a plane to shoot a film in Fargo, North Dakota. Emily Mortimer is starring, playing a fictional version of your mother in the real location of your actual hometown. It’s a dream come true. And it’s your first time directing a Real Known Actor; one you’ve long admired.

As Amy crosses the street to join you and you both whoop in joy, a call comes in from your producer. You scurry away from the table on instinct. Sure enough, it’s not good.

She’s going to call you in five minutes.

She says she’ll do anything she can to get you another actor. She has to take a film shooting in Alabama.

You pace the sidewalk in loose figure eights, staring at the cracks in the concrete where grass erupts. You can feel Meena and Amy’s eyes on you from 30 feet away. You’re not ready to look at them just yet.

It’s a lead role opposite a legend of cinema. She has to take it.

Just go! you think, like that kid in Old Yeller when he’s trying to get the dog to leave even though he loves him so hard.

This could be just a simple push-back in timing, you think. Emily is still very into doing it, just in late October instead of early October it’s fine. It’s fine?

Problem is, you grew up in North Dakota. You know that fall turns to winter hard and fast, and it’s notoriously unpredictable. If you push those three weeks, snow could come and there’s a very high chance the movie loses the spring, summer, and fall time periods you’re looking to create and, most importantly, the feeling of windswept grass- swaying possibility that is to infuse the story’s final images. Those blindingly white, Coen-esque expanses just won’t do for this Fargo story.

Plus, as most filmmakers can attest, a postponement of any film is very often a death. Shooting a film — actually rolling camera with everything in place — is nothing short of a miracle every time it happens.

You think of how easy it will be for the financiers to simply have one less film in their anthology. It would actually save them a ton of money! You can feel the film slipping from your grasp. You must get on that plane in 48 hours, otherwise (you’re convinced) there will be no film.

Emily (because she is a British angel) mind-blowing-ly makes good on her offer to help find another actor for your timeframe. She gets the script to Keri Russell (along with a screenshot of a serial killer-esque early visual presentation which featured both hers and Keri’s heads cut from fashion magazines and pasted into the the section marked “Dream Casting!!!!!”)

A miracle occurs. Keri says she wants to do it! She asks for 12 hours to see if she can finagle her life so that taking two planes to Fargo at a moment’s notice can actually happen. Exactly 12 hours later (another angel), she graciously passes because she’s a human being with an actual life.

It’s 9:00 AN when Keri passes. In one day your crew is scheduled to fly to Fargo. The weather is exactly right, and there is a distinct possibility that pushing those three weeks for Emily means a movie made up of snow-covered tundra rather than the golden field in Andrew Wyatt’s “Christina’s World.”

You do the only thing that makes sense at that time: sit very very still for 20 minutes and wait for the Next Right Move to arise.

You are grateful for that David Lynch obsession you go in and out of. You are grateful you learned transcendental meditation and sometimes actually do it. You sit your ass on your bedroom floor, think your mantra, and you go to woo-woo-ville, la-la-land, the astral plane, the spirit realm — whatever one wants to call it, you swim around in there for a while and when you come back to earth, you know exactly what to do: The Next Right Move.

Two hours later you stand at the head of a conference table at Refinery29 headquarters, fighting through the soul-crushing embarrassment of pitching yourself as the lead actor of a film they’ve already agreed to finance…when it was starring Emily Mortimer.

The role is for a Czech woman in her thirties!

I am a Czech woman in my thirties!

(You’re like a song and dance man frantically tap dancing). I’ll be playing my mom in my mom tribute movie!

Maybe the adorableness of the PR angle can make up for the fact that I am in no way shape or form Emily Mortimer!

The next few hours are a study in humiliation. When film executives and producer types are told they’re getting Emily Mortimer and they’re faced with the prospect of you….the recoil is palpable. In that conference room in lower Manhattan and through the speaker phone in LA, it’s as though these humans are being handed a bowl full of vomit and told that it’s soup.

The best part is, because the film is being financed under the altruistic auspices of supporting your vision as a filmmaker, they can’t tell you how they’re really feeling. You have to listen to these sweet people say polite, carefully supportive phrases through their obvious disappointment. You have to let the unspoken just……

(The unspoken of course being: “No. No fucking way are you playing this part instead of Emily Mortimer. No, we hate you and your stupid unfamous face no.”)

These conversations make you want to move into the basement of a basement’s basement and live there forever but…you want to shoot the film more. So you stick to your guns and maintain your conviction that you can make a film that works, even if you have to be the one to star in the damn thing.

Nothing has ever gone against your people-pleasing, have-to-acknowledge-every-subtext-you-can-identify personality more than this moment. But you do it. For the love of the game, you grit your teeth and you do it.

By the end of the day, you and your crew are cleared to get on those planes and head to Fargo to shoot the film. It’s all happening on schedule, the camera package is careening from Minneapolis to Fargo on a truck, all of the sun-dappled midwest imagery your director brain has longed for is about to become a reality.

But she’s still in too.

The financiers have now agreed to fund not one but two shoots in Fargo. This way you can shoot all the exteriors on this initial trip as planned, and then go back to Fargo with Emily in three weeks to shoot the interiors. If weather makes it necessary, you’ll simply green-screen Em into the field at the end. Minor rewrites! You’ll get your seasons, your changing leaves against vinyl siding, your slip-n-slide, your swaying wheat field of possibility and a goddamn movie star.

You never thought you would be so happy to be absolutely repellent as a casting choice.

Congratulations Ms. Lukas. All of your dreams came true and the film is a frighteningly accurate depiction of how you imagined it:

1. There are four distinct weather seasons in a twelve minute story (you sent Meena to Fargo alone in December to get some snowy b-roll).

2. Emily Mortimer does a spot-on impression of your Czech mom while also bringing to the screen a warmth, vulnerability, humor and of course, star quality that only she could.

In conclusion, you don’t need to feel guilt here, Ms. Lukas. That’s some female socialization BS that has no place in the dance of making movies. You were never trying to manipulate everyone around you (using Machiavellian-like behavioral chess moves) to give you piles of extra money for an entirely additional shoot in a remote area during an already somewhat indulgent filmmaking scenario…but ya did, and you got the movie that was in your head, out onto a screen.

Note to your future self: this incident taught you that your fuckery operates beyond even your own conscious understanding, and this you should not only accept, but embrace. You’re kind of a witch. Hopefully the good kind. Congrats.