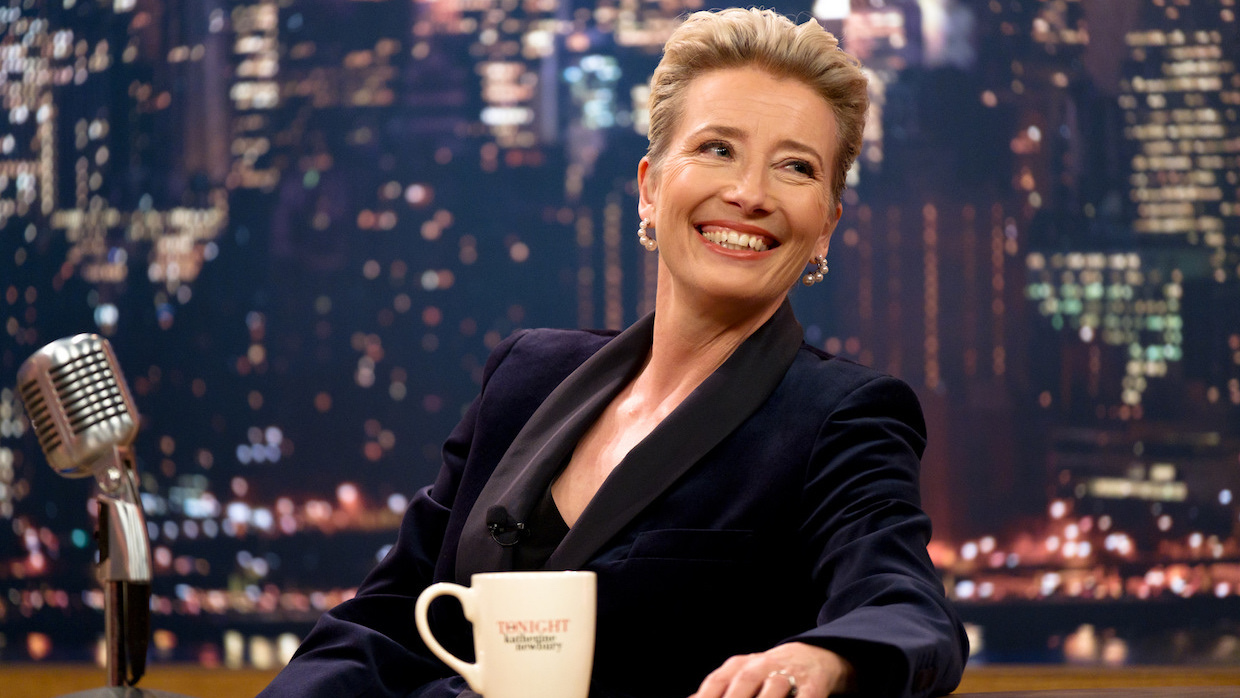 “Difficulty that is invisible to most spectators?” That sounds like the goal for all comedy films. To me, a comedy must above all be entertaining, funny and moving. If any of the difficulty of making an independent film is felt, it will kill all of those things.

We certainly had our share of challenges in making Late Night, the biggest of which was designing an actual late night talk show set and offices in an insanely short period of time. Emma Thompson’s character’s show, Late Night With Katherine Newbury, is regarded as an iconic show—it is the gold standard of late night TV—and we had less than five weeks to research, design and build the entire show-within-the-movie in a drafty warehouse in Brooklyn.

Making Late Night with Katherine Newbury believable meant that every detail of the show had to be created, not just the set. We composed a theme song, cast a band to be the Late Night band, cast the “crew” who work behind the scenes of the show…and then we had to plan our real crew shooting our Late Night “crew”in that same small space, all in 25 days.

We were fortunate to work with some brilliant women–Elizabeth Jones, our production designer; Michelle Baker, our location manager; Julie Bloom, our first AD; Lesley Barber, our composer, Eleanor Infante, our editor—and two incredible men: Matt Clark, our DP, and Mitch Travers, our costume designer. Together we toured the sets of Jimmy Fallon, Stephen Colbert, John Oliver and Seth Meyers, and we noted the details of each show to make sure ours felt authentic.

One big thing that seems like a small detail that probably no one will notice are the photos on the walls of the Late Night studio. All of the late night sets we visited had hallways covered in photos from previous episodes. This felt like a detail we couldn’t afford to miss, but we obviously didn’t have the time, budget or, for that matter, 30 years of a real TV show to pull from. Our crew made the impossible happen. Mitch designed two outfits that could easily allow for color shift in Photoshop. Elizabeth designed a set that was at once original yet familiar. Julie maximized a fitting schedule to work in photographs that could be used for this purpose. Then the incredible Emma Thompson waded through a truckload of props and created an archive of thirty years of hosting a late night talk show with multiple guests, comedy bits and routines—in just two hours.

As our cast and camera travel through the offices and writers’ room, the walls are adorned with photos from previous episodes. That was nearly impossible to accomplish, but to the audience it sells the idea that this is a real TV show, with decades of history. Hopefully no one will stop to think, “What episodes?!” They also won’t notice because Lesley Barber wrote a theme song to the Late Night show that is original yet sounds like something you have heard your whole life. We use that theme song as the basis for the score throughout the movie.

The last piece of the puzzle was working with the “audience” of Late Night, which we would only afford to have for four hours on one day, but we had to sell as different audiences for multiple episodes. We shot all the audience reactions to every scene in a few hours at once. This basically meant that Julie and I had to act out all of the scenes, playing the roles of Katherine and her guests, to elicit the right reactions from the audience of background players. The biggest challenge we had was deciding who got to play Emma Thompson as Katherine Newbury, because we both want to be Emma all the time. (Still do.) Because being Emma Thompson, and even just pretending to be Emma Thompson, is a glorious, glorious thing.