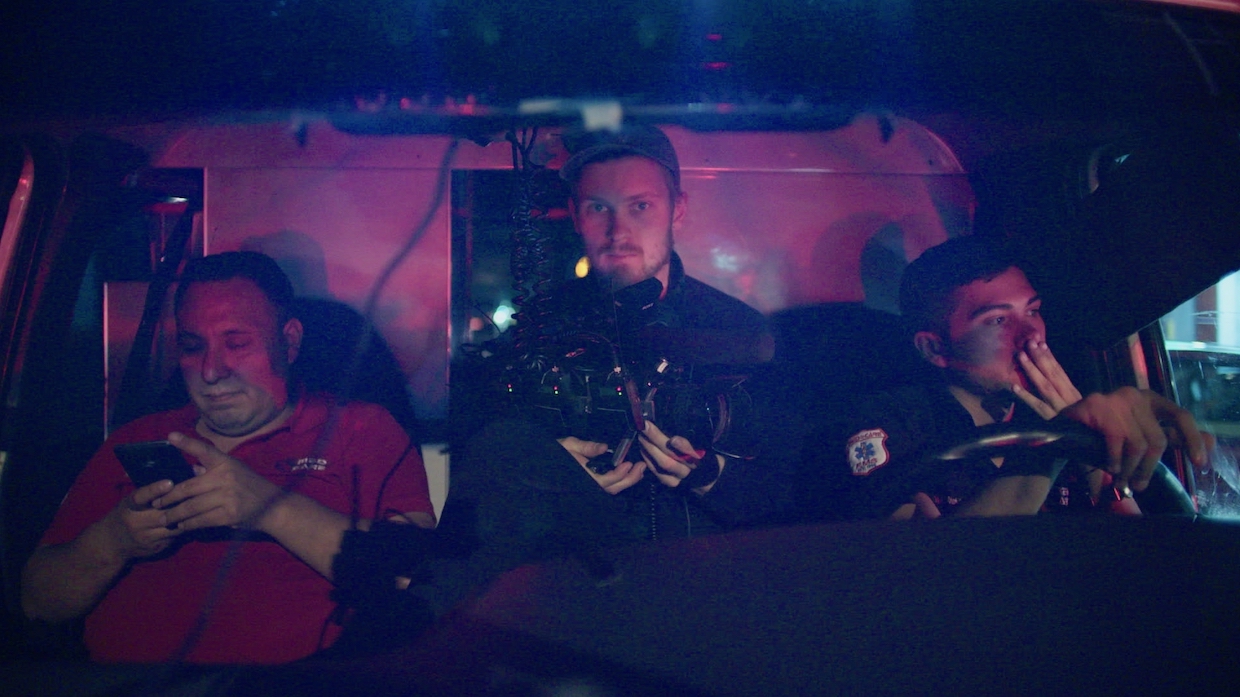 by Filmmaker Staff
in Cinematographers, Directors, Interviews, Sundance
on Jan 27, 2019

In Mexico City, there are only 45 publicly operated ambulances for a population of nine-million-plus, creating a need filled by private labor. Luke Lorentzen, whose first feature New York Cuts premiered at IDFA in 2015, embedded himself with one privately operated ambulance run as a family business, tagging along night after night. Operating as his own shooter for Midnight Family, Lorentzen’s sophomore feature is a formally controlled, sympathetically embedded portrait of multiple instances of economic inequity (with car chases!). Via email, the director/DP spoke to the challenges of operating two cameras as a solo shooter, depending on Mexico City’s existing nighttime light and using only one prime lens.

Lorentzen: From the very beginning, I was committed to shooting this film observationally, and I knew that having a crew present would complicate my ability to embed myself into the everyday fabric of the Ochoa family’s routine. I always wanted to recreate the experiences and feelings I personally had in the ambulance night after night, and there are several moments in the final film that would never have been shared with a larger crew present. The film is about a family that operates a private, for-profit emergency medical service in Mexico City, and the most important moments were often the most sensitive.

The ambulance also moved unpredictably, and I was able to make spontaneous and reactive decisions that would have been tough with even one more person. And these weren’t only aesthetic choices, but also personal ethical considerations and important safety concerns for me and the Ochoas.

First and foremost, I see my job as an observational filmmaker as connecting with the people I’m filming and working with–that comes before anything related to the equipment I’m using to make my film. When shooting alone, all of my important creative decisions can quietly happen internally while my real focus remains getting to know the people I’m with and letting them get to know me. I can change a lens or change my mind about something without it being a discussion (in a language the subjects don’t even understand).

Lorentzen: Being aboard the ambulance was far more than just an adrenalin-filled experience of racing through traffic—it was a space where my personal sense of right and wrong was questioned and challenged. I wanted the film both to convey my personal experience and ask viewers to grapple with the decisions that the Ochoas wrestle with on a daily basis. To achieve this immersiveness, I knew the camera had to place the audience in the ambulance as if they were one of the paramedics. I shot the entire film on just one prime lens–a 24mm Canon EF lens—and I think that visual consistency planted the viewer in the midst of the Ochoas’ world. It was also important for me to be very close to the action so that viewers felt as if they were participating rather than watching it from afar. That 24mm prime lens made it impossible for me to zoom in, which would have been too easy a crutch in the most important moments.

Lorentzen: From a visual perspective, I’ve always loved Michael Glawogger’s films. He often worked with the cinematographer Wolfgang Thaler. Whores’ Glory, Workingman’s Death and Megacities were some of the first documentaries I ever saw that put visual considerations ahead of anything else. The camera is always so close to the action, the colors are rich and the camera movements feel like active decisions rather than just reactive solutions. Some of the neon night scenes from Whores’ Glory were especially inspirational when finding a look for Midnight Family.

When I started shooting, a lot of fascinating work had come out of Harvard’s Sensory Ethnography Lab (Sweetgrass, Foreign Parts, Leviathan, Manakamana). These filmmakers were experimenting with aesthetic approaches that made their films feel like events more than stories. Their films were these incredible sensory experiences that showed me the power of putting a viewer into an environment.

I wanted Midnight Family to be a film that you had to watch with eyes wide open. And while I was still interested in telling a gripping story, I didn’t want to make something that you could just listen to and still get the gist of.

Lorentzen: The ambulance was an incredibly chaotic, cramped, and unpredictable space. It took weeks of trial and serious error before coming up with a system that properly captured all of that energy. I eventually decided to have two cameras that would roll simultaneously despite just being a one-person crew. One camera was mounted on the hood of the ambulance and would face inwards through the windshield to film the drivers. The other camera was with me in the back of the ambulance, often on a tripod but sometimes handheld. It was a lot of gear to handle on my own, but when it worked the footage allowed me to cut between spaces in a thrilling way. It makes the ride of the film a far more dynamic experience for viewers.

Lorentzen: I shot on the Sony FS7. There are few cameras that do so well in low light, and I knew that almost the entirety of this story would unfold in dark and shadowy places. Paired with a Canon 24mm f/1.4 lens, small sources of light like a cellphone screen or even a watch would create these glowing and beautiful images. Some of the best looking shots ended up being in the darkest places.

Lorentzen: I didn’t use any added light throughout production, with the exception of a very small LED panel that I duct-taped to the dashboard of the ambulance to add a bit of a glow on the faces of the people driving. This light was about the brightness of an iPhone screen, but that slight boost was enough to bring out the drivers’ facial expressions as they sped through traffic. The Ochoas had already placed some really cool LEDs in the back of the ambulance that gave a lot of the film a deep blue look, and the flashing ambulance lights were a fun thing to film and play around with.

Because so much of the film takes place at night, it was an ongoing hunt to find the right light when filming outside of the ambulance. I got to know certain storefronts or even bright gas stations that would create these magical places to film, and I always kept my fingers crossed that the right conversation or moment would unfold when we were parked outside these places. A three-story building lit up at night or a big neon billboard can create a stunning wall of light and color that you could never find when filming during the day.

Lorentzen: The scenes in the film that really take advantage of the multi-camera rig that I built were the most difficult. There were so many factors that needed to line up for that system to work and more often than not, one of the two angles wouldn’t pan out as hoped. I had a makeshift start and stop button for the hood-mounted camera that I could access in the back of the ambulance, but I otherwise couldn’t monitor that camera unless the ambulance was stopped. Its battery would die or its media would fill up without me knowing, and I would have missed so many important moments that probably would have gotten me fired several times over had I been working for another director. But I’d get it right maybe half the time, and I knew that when things worked, the results would make those failures completely worth it. I told myself I would just double or triple the number of nights I spent in the ambulance to make up for it.

Lorentzen: Our look was very baked in from the very beginning. The colors and light that came naturally from Mexico City’s streets at night were beautiful and didn’t need to be changed or manipulated much. This film will probably remain one of the easier color correction jobs I’ll ever have.