“Cramming Remote Focus and Remote Iris Control Onto Those Tiny Lenses was Quite a Challenge”: DP Amanda Treyz on Bootstrapped 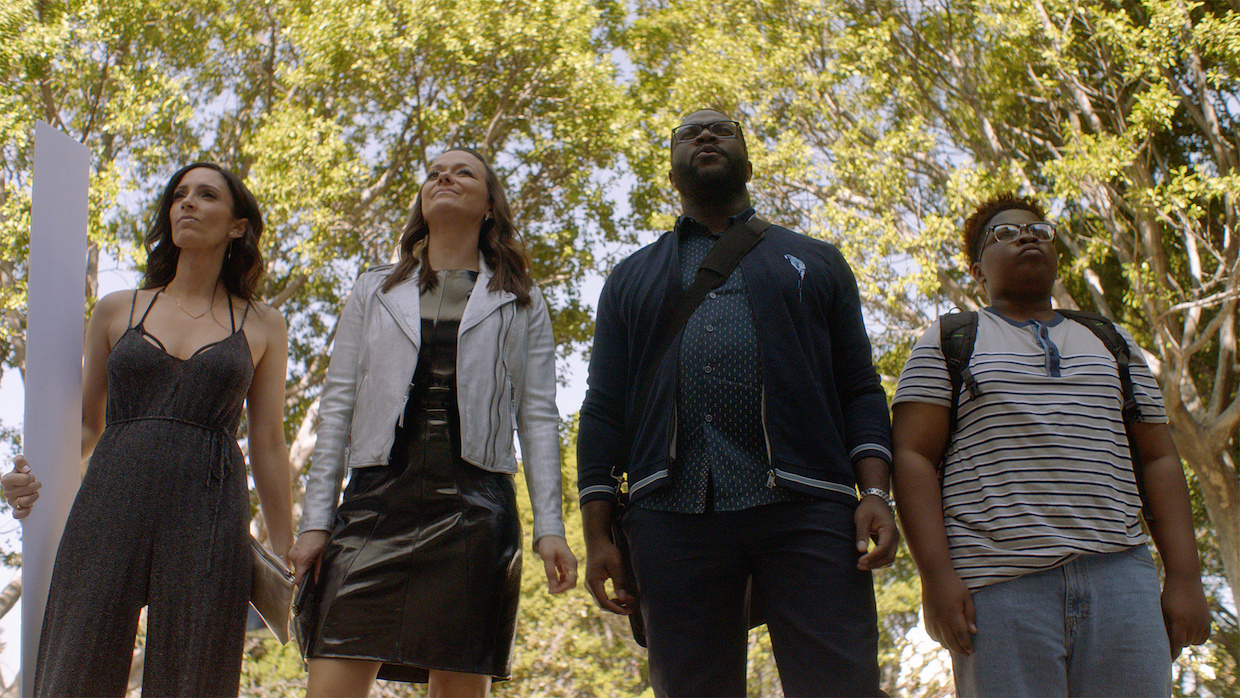 Screening as part of this year’s Indie Episodic at Sundance, the pilot for Bootstrapped draws upon star/writer Danielle Uhlarik’s background working at Google and Twitter. Uhlarik stars alongside Maribeth Monroe, playing two developers trying to get their fashion app (bitchthatwouldlookbetteronme.com) launched from Kansas City out into the world. Via email, DP Amanda Treyz spoke to staging comedy in two-shots, mixing color temperatures and getting away from the zoom lens mode of television production.

Treyz: I was put forward for the job by my good friend Doug Bilitch, a producer at Kids at Play. I’ve done a couple of their narrative projects and I think I’m their go-to choice for things that are a little outside the box. I read the script and really loved it. For starters, it’s not every day that you get offered a job about women in tech, but to also be able to tell a story about women that don’t feel like they have to hide their joy in being female to be successful—that to me is truly revolutionary. I met with Danielle Uhlarik—the creator, writer, and one of the leads—and the director, Stephanie Laing. It was one of those meetings where I instantly knew I was on board for whatever these two wanted to do. They were so smart and interesting and had such great ideas that I was already sold. Thankfully, they offered me the job. I was also very excited to work with Gumption because of their artist driven mission.

Treyz: My goal was to make these characters stand out as much as possible. The heroes of the story are these scrappy underdogs who aspire to the slick-looking world of tech. So, we went handheld as much as possible to be with them, and placed stuff in the foreground of the frame for that rougher observational feel, but chose vintage prime lenses to give a cinematic look. There’s something about working with primes that creates an extra sense of intentionality about every shot; it makes you have to think it through and commit to a choice in a decisive way that I think is pretty rare in TV today, when you’re on a zoom so much of the time. Stephanie was totally on board for this approach and didn’t mind waiting a minute or two for a lens change, which really helped.

Treyz: We looked at High Maintenance a lot—I love the way that show elevates the everyday and effortlessly creates different moods for different situations, so we wanted to do the same. We wanted to unite Maribeth and Danielle in the frame a lot. For me, playing comedy in two-shots works so well; you get to see the joke and the reaction in the same frame. It also enables the actors to riff off each other and both be covered organically without having to cut back and forth between them.

Treyz: TIME. I know it’s forever the challenge in production, but we only had a very, very limited time in the garage, and a lot of complicated stuff with the car coming in and out, and the projector, and dealing with limited space, and the time constraints of a minor, and a small window of sunlight each day. We also had less than half a day to shoot the pitch section with the audience and the ladies on the stage. It was incredibly challenging to get all the angles. My camera operators, Ben Van Cleave and Chris Freilich, really rose to the challenge and helped make sure we got all the coverage and B-roll that we needed.

Treyz: We shot on two Alexa Minis. The Mini is so small and versatile I knew it’d be the perfect tool for our purposes. Stephanie and I really wanted to elevate the look. It was a TV show, but we wanted it to feel like a special place. We chose to shoot on an older set of Zeiss Super Speed MK2s. I’ve been using those lenses my whole career, so there’s a real familiarity to working with them. My first AC, Dan Fritz, was not as enamored with them—cramming remote focus and remote iris control onto those tiny lenses was quite a challenge—but he was very gracious about it.

Treyz: My gaffer, Lee Narby, was incredibly helpful. We had a lot of big challenges for the lighting department and he really helped take the look to the next level. The garage in particular: we did a lot from the ceiling, which Lee made a lighting plot for, and then augmented with practicals on the desks. I really wanted to play with mixing color temperatures on this—we had several scenes that took place in the same area—for example, the first two scenes at the fair—and I really wanted them to have different moods. We changed the approach quite a bit between the two scenes, going more tungsten and theatrical for the first and much moodier and daylight for the second. I love how the lighting in the second one really conveys a very different feel than the first.

Treyz: Strangely enough, I’d have to say the very last scene. All the challenges we’d been facing in the garage come together in that scene, and since they’re watching a projector in the beginning and the door opens at the end, obviously we were dealing with a big exposure change. Top that all off with the confined space of the garage and camera operators and actors avoiding an albeit slow moving car at the very end. Remote exposure control was very clutch for this scene, as well as going in with a very clear game plan. Steph and I really focused on the garage stuff while shot listing and it paid off in the end.

Treyz: I knew going in that I’d have very little time in the DI so really tried to get as close as possible on set. We only had the rec 709 look on set, but our DIT Timothy Gaer was taking stills and notes and was very helpful keeping us on track.