“…If They Don’t Bleed in Front of Camera, Then Usually They’re Sort Of Always Right”: Gus Van Sant On Cinematography, His Actors, and Don’t Worry, He Won’t Get Far On Foot 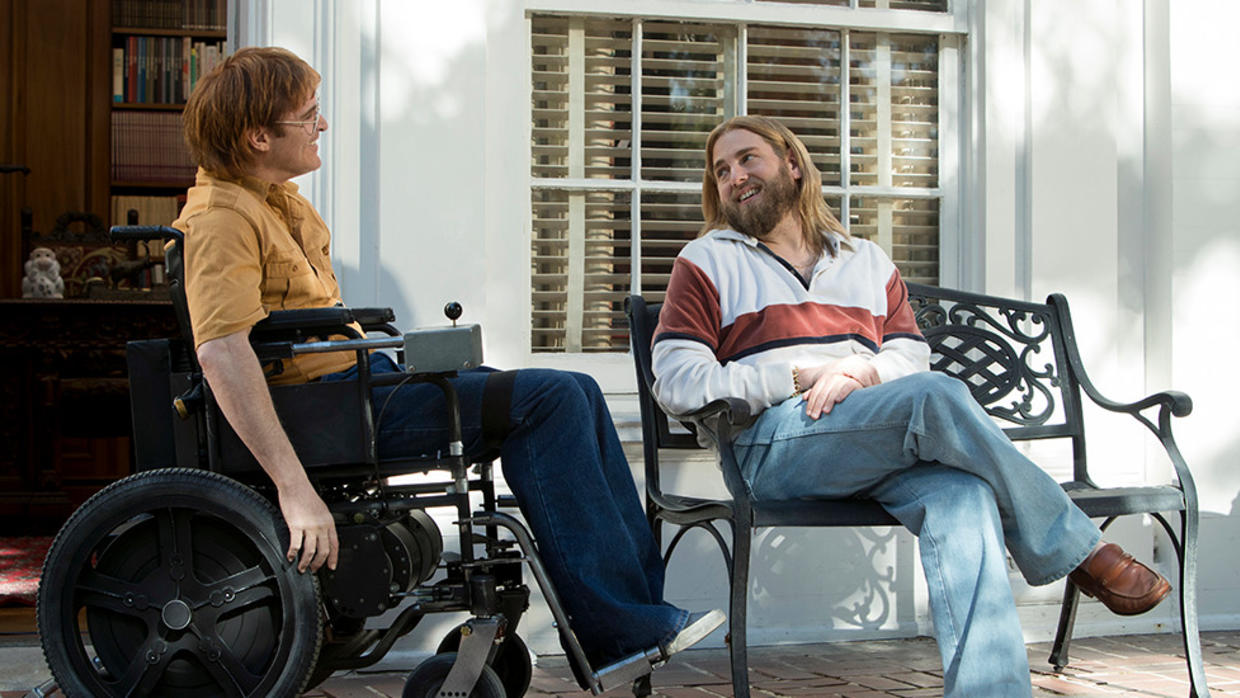 Don't Worry, He Won't Get Far on Foot

Gus Van Sant won’t settle and his insatiable itch to reinvent himself hasn’t ebbed. Years working in, out, and around the studio system have offered him ample opportunity to normalize, and, occasionally, he’s adopted the opportunity, if only to do something different (as only different could be his “norm”) once more. Even his deliberate efforts to direct something “standard” tend to tinge off-kilter, with his itch to experiment crackling just under frame.

His latest re-invention, Don’t Worry, He Won’t Get Far On Foot, which has its streaming premiere today on Amazon Prime, wiggles somewhere in between Van Sant’s oeuvre of odds, ends, and in-betweens. Marketed as a biopic in the same vein as his awards laden Good Will Hunting and Milk (the two films the trailer credits him for), the film is dramatically unperturbed, weird, and aesthetically feral in ways its advertising decides not to relate. Pulled from a few chapters of the late John Callahan’s (the Portland, Oregon based quadriplegic cartoonist) memoir, Van Sant casts Callahan’s story with star-power in the shoes of his hometown people. And when it comes to Jonah Hill, Jack Black or, as Callahan, Joaquin Phoenix, you’ve never seen these actors used like this.

In an attempt to tie Van Sant’s eclectic work together, we discuss, in broad terms, his approach to camera language as it relates to ctors and performance.

Filmmaker: You’re doing something unorthodox with documentary zooms here, but it would be limiting to describe them as just that. When the camera does roam, it seems to roam more deliberately than a documentary camera and with an awareness of those techniques.

Van Sant: I wanted to do that because I had been thinking about the stylistic development in the ’80s when people started to use handheld cameras in [narrative films] more. It made them feel more like a documentary. But, even though they were handholding the camera, they forgot that the documentary filmmakers were also zooming. The [documentary filmmakers] would handhold the cameras, yes, but they would also zoom a lot and for different reasons. A lot of times you’re zooming in a documentary so that you can get cutaways. You zoom really fast so you can cut out those frames and have another angle on the interview. You’re basically zooming in and out to grab different sizes. I just had never really done it that way, and it occurred to me that there weren’t a whole lot of films that zoomed like that, even though you do see them a lot in documentary pieces.

Filmmaker: The present tense scenes in the film seemed to have more of the roaming documentary zooms while the flashback zooms remained more Altman-like and formal?

Gus Van Sant: Yeah, that’s true. I don’t know why that is. It wasn’t written down to be done that way. It was probably something to do with my stylistic relationship to those flashbacks.

Filmmaker: The side-scrolling montage technique used during Jack Callahan’s recovery is never utilized again. It’s a one-off. You seem unafraid to play when some directors would be scared or against allowing a flourish that doesn’t show up in the film again.

Gus Van Sant: I think part of it was that, in the original script, there were a lot of different types of styles including multiple actions going on in different frames. I kind of got rid of that, but I’m kind of always dreaming stuff up as I go along and incorporating it. I don’t know if “unafraid” is the right word. I’m probably more “afraid” of it not being interesting [laughs]. So I’m changing my styles as a way of keeping you watching.

Filmmaker: You once said, in an interview on Elephant, that you were pushing yourself to get things right on set instead of finding it afterwards in the edit. Is that a general principle you’ve worked towards developing, and where do you stand now with Don’t Worry, He Won’t Get Far On Foot?

Gus Van Sant: Yeah, I mean, I think I’ve been doing that for a while now and to this day. In the first film that I made, Mala Noche, I didn’t have the same machine behind me. Later, when I did Drugstore Cowboy, there was this obvious style pushed [on the film] where people would gather a lot of different angles on set and figure out how to use them all later. They’d also shoot those angles to edit the performances. The editors liked to edit their own performance out of the material rather than allow the actors to do that on their own. As I got older I realized that the reason Hollywood liked to do it this way was because they could have more control later when they were editing. Producers could add their ideas to the story, you know?
The other way to do it was to decide on set what was correct. Make the decisions there rather than later in the edit. It limits you a little bit, but it’s also a lot faster to do it that way. You don’t have to spend days filming the same scene. You can just do it once.

Filmmaker: Would you say that a lot of your camera-related decisions are designed to better your actors performances?

Gus Van Sant: Yeah. When you’re shooting and not intending to manipulate a scene or the acting later you’re preserving the actors contributions. Also, [regarding] the dynamics of the staging and the blocking — a lot of times films aren’t really blocked out. They’re a little more stagnant. But if you stage the scene in a way that it might really play out in real life, you can shoot it at any angle. The angle is not what’s describing the scene, it’s more like the action, the dialogue, the blocking, and the lighting — not the camera. It’s kind of a different way of going about it — and you can do both. You can block it really well and you can also shoot it multiple times.

But I’ve found that when you’re just wandering around in reality the blocking is perfect. What you’re trying to do in a film is recreate a reality so that the audience has a certain sense of what’s happening in front of them. And sometimes that kind of just comes down to how things are in real life. But it’s almost impossible to get it the way you see it in real life. A lot of times when you’re shooting a scene everything in the shot is incorrect, but as soon as you say “cut” all of a sudden everything becomes correct; people stop trying to play for the camera and do their own thing. So, you always want to have that element of reality. If you have that you can use that as a way to communicate your scene rather than more camera angles.

Filmmaker: Is any of that more or less true in your experience with non-actors?

Gus Van Sant: Non-actors are good because they don’t have all the sort of styles. They’re not acting. They can only do things the way they would do it. If they can do it all, if they don’t bleed in front of the camera, then usually they’re sort of always right.  And actors are a little different because they’re putting on a performance. They’ve worked on all of these things that sort of make them feel like a real person. The non-actor just comes that way.

Filmmaker: In your interview with Filmmaker about Gerry, you said you considered Drugstore Cowboy and My Own Private Idaho to be “Gus Van Sant Movies.” Is Don’t Worry, He Won’t Get Far On Foot a “Gus Van Sant” movie?

Gus Van Sant: Yeah. I mean, I guess so. I’m not sure what would make it a film with my name on it because I’m usually trying to do something different all of the time.

Filmmaker: You’ve never seemed cynical or resentful of making movies in the Hollywood system. Is that because those are also experiments in their own way?

Gus Van Sant: You mean like because I’m challenging the Hollywood System?

Filmmaker: You used to describe taking on Good Will Hunting as this thing that you were unsure you could do, I assumed the challenge was that you had to reshape your experimental instincts to take on the Hollywood structure — so “normalizing” your aesthetic for a Hollywood film was an experiment in itself.

Filmmaker: This new film has been marketed as an awards biopic, advertising you as the director of Good Will Hunting and Milk. Did you approach it as an “awards movie?” Do you ever actually think of or approach a film in the framework of it being an awards contender?

Gus Van Sant: I actually do think of things like that. But usually when I get to do [these kinds of films] they start to change for some reason. A lot of the times I actually do intend them to be kind of standard, biographical films–— but somehow they change.

Filmmaker: At what point in the process do they start to change?

Gus Van Sant: I don’t know. Through the process of deciding how the camera works, choosing the actors — somewhere along the line it begins to get away from the standard specimen.