The Making of an Ecosexual Adventure: Beth Stephens and Annie Sprinkle on Water Makes Us Wet 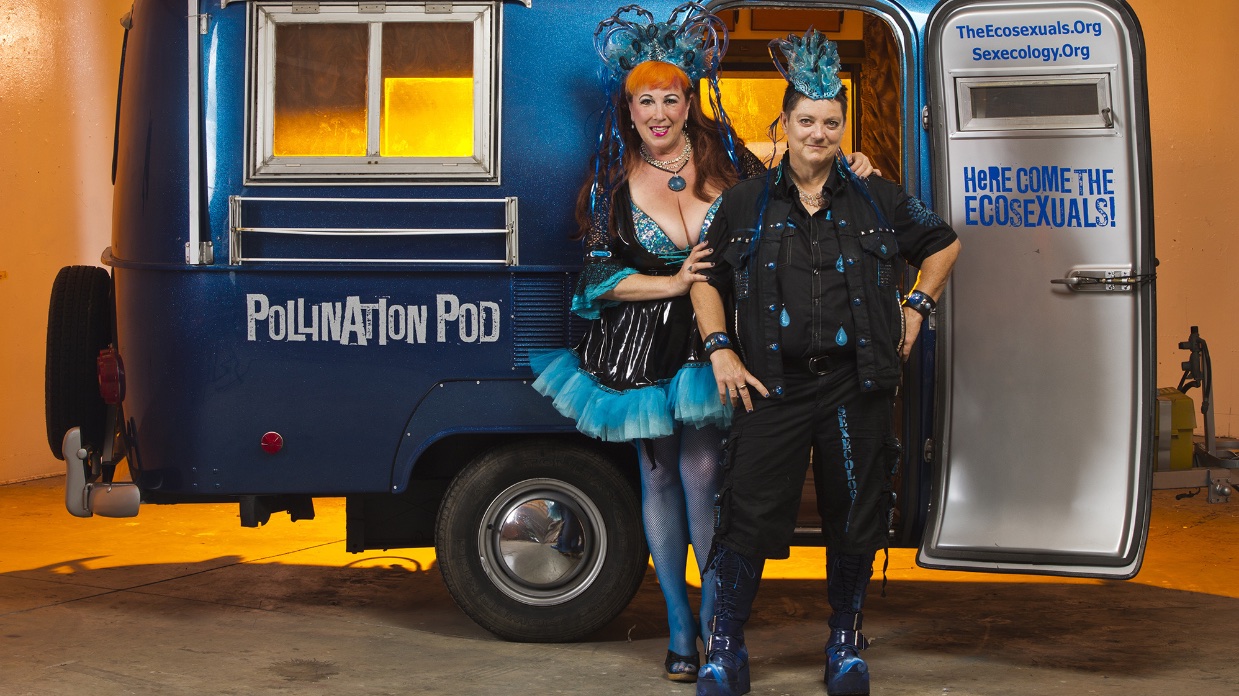 Annie Sprinkle and Beth Stephens in Water Makes Us Wet

Water Makes Us Wet – An Ecosexual Adventure is Beth Stephens and Annie Sprinkle’s ecstatic exploration of the pleasure and politics of water. Premiering tonight at MoMA’s Documentary Fortnight, the doc is part road movie, part experimental film, part activist project. Water Makes Us Wet combines the allure of sex and environmental justice as it takes viewers on a trip through California, a state recently ravaged by drought and wildfires linked to climate change. Moving from San Francisco’s wastewater treatment plants to Sprinkle’s childhood house to the shrinking, toxic Salton Sea, the queer couple and artistic duo create a vivid meditation on the power of love as a response to escalating environmental destruction. The film is narrated by a powerful, unruly character, the Earth, here imagined not as a benevolent mother but a queer lover. We interviewed Stephens and Sprinkle via e-mail as they were getting ready to discuss their work with New York City’s audience at MoMA and then again on March 9th at the NYC Feminist Film Week, running from March 5 through 10 at Anthology Film Archives. The film will also receive a five-night run at New York’s Roxy Theater, and it travels to Real Art Ways in Hartford on March 1. This interview has been edited and condensed.

Filmmaker: This film has two main storylines, one about your road trip though California to explore the water crisis, the other about your love triangle with the earth. How do they combine?

Stephens: I think the love triangle with the Earth came first. When we started this film, we had already completed a performance art project in which we married the Earth and other nonhuman entities in different parts of the world. For our first documentary, Goodbye Gauley Mountain (2013), we used my family story and my voice as a way to engage mountaintop coal mining in West Virginia. However, we live in California, where water has been a serious environmental and economic issue for a long time. Annie grew up here. The road trip was the only way that we could get to where we needed to interview our subjects. Having trans the artist Sandy Stone as the voice of the Earth brought these two storylines together. Sandy is a friend and a great performance artist and musician. We wanted the Earth to have an attitude, and Sandy’s voice has a wry snarky quality which was perfect for the project. Sandy also recorded and engineered our theme song, with our executive producer Xandra Coe writing and singing it.

Filmmaker: How many people travelled with you for this project?

Filmmaker: You interact with a range of subjects including feminist scholars, biologists and water treatment plant workers. How do these voices engage with one another?

Stephens: Some voices in the film use the lens of ecosexuality, whereas others use the lens of science. But all of them are trying to find ways to keep water clean and accessible. Because of this, almost all of the people in the film are concerned with justice. Many of them were heterosexual men whose work resonates with what the we were doing. We want to mention Don Canestro, the director of the Kenneth S. Norris Rancho Marino Reserve near Cambria, California. He was a fun, sea-loving person who supported our project and tried to organize a screening of the film at the annual meeting of the UC Reserve directors. They postponed that screening, and tragically Don passed away last November. Through this film, we became more aware of ecosexuality as a friendship incubator between folks that love water and the earth. Water is a highly political topic: the wealthiest people have access to the best water while many poor communities don’t. We wanted to focus more on this aspect. However, quite predictably, wealthy people and corporations didn’t want to talk about it. We tried to get interviews with a group of African-American farmers in a town called Fairmead, but they didn’t want to be interviewed by yet another white film crew making a film that probably was not going to bring their water back. We didn’t push that as we try not to exploit people for our work.

Filmmaker: Do you think of California’s landscape and water as characters in their own right?

Sprinkle: I do. Definitely. There is a scene in the film that makes that very clear. We are in San Bernardino to meet people opposing Nestle’s bottling of local water. Beth suddenly start to lovingly talk to a stream of water. This was an ecoromantic impulse, totally spontaneous. It is my favorite part of the film. People use water in all kinds of ways, but how many people really give water their love? I do think water likes to have our love.

Filmmaker: Part of the documentary is about conveying the bodily pleasures of water. How did you approach this task as filmmakers? Was your work in queer performance useful for that?

Sprinkle: I’ve always been an aquaphiliac. Water is a kind of fetish. As performance artists, we were pretty uninhibited. There is some nudity in the film. It took some courage to be naked, chubby and over 60! I’ve done a lot of kinky things in my life, but being naked, old and chubby is the most kinky. Giving blow jobs and fucking on film when you are young are nothing compared to that.

Stephens: I too have always been an aquaphiliac. I grew up having access to beautiful waters in West Virginia. Then I realized that these beautiful, healing waters are now highly polluted and those who depend upon them, humans, plants and animals, are also suffering. Even those who use bottled water suffer from the pollution caused by plastic. It is a mess. We hope the film will inspire more people to appreciate the sensual pleasure of water and become active in protecting water around the world. Hopefully people will stop buying water bottled by Nestle. We did.