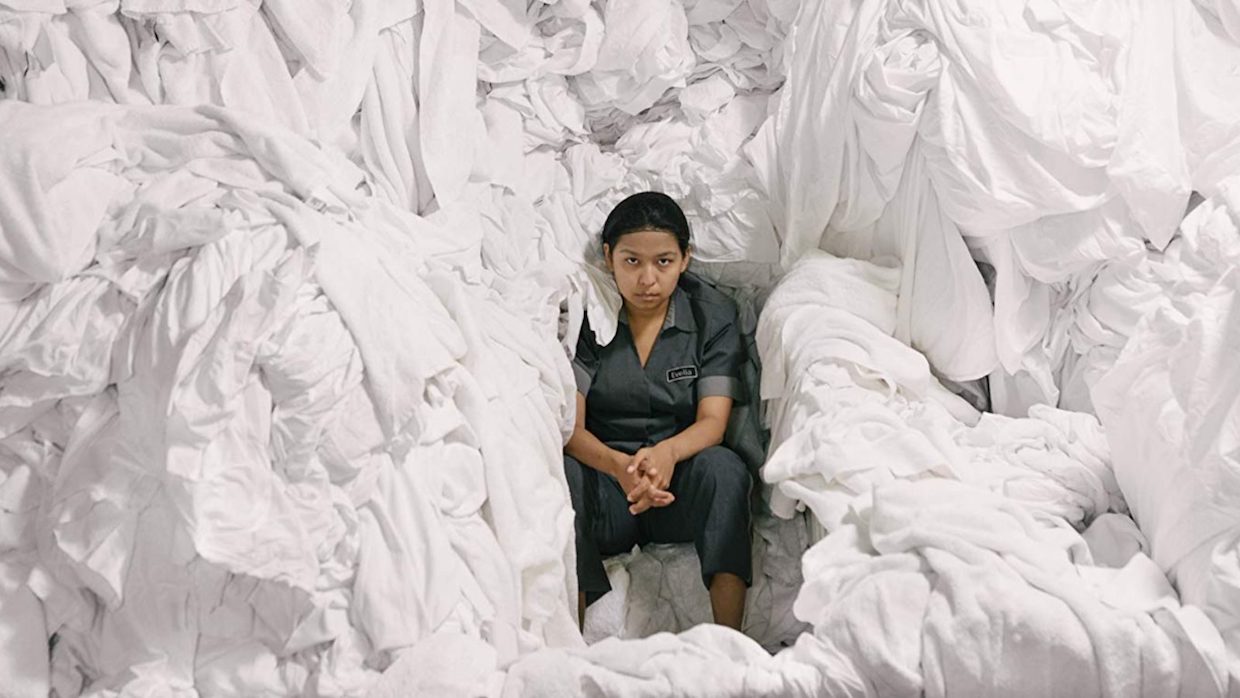 Gabriela Cartol in The Chambermaid

Labor was a theme binding many selections at this year’s New Directors/New Films, which concluded this past weekend at the Film Society of Lincoln Center and the Museum of Modern Art. That feels timely, in the wake of the success enjoyed and debates sparked by Alfonso Cuarón’s Roma, about a loyal mestiza housekeeper and nanny caring for a well-off Mexico City family, and the high-profile arrival in the U.S. House of Representatives of progressive firebrand Alexandria Ocasio-Cortez, a proud former waitress whose working class roots have rattled the Fox News crowd. Not that world cinema attends to trending topics, but surely film curators do, and for American audiences right now such films can provoke something more meaningful than the pro-wrestling-level tirades that pass for social discourse in the national news media.

Set in a luxury high-rise hotel in Mexico City, Lila Avilés’ The Chambermaid immediately recalls Roma in its observational story of a young, shy, long-suffering domestic dutifully serving the moneyed class while seeming to have no personal life beyond an occasional, cherished long-distance call to her family—presumably in a far-off province outside the city. The films also share a poignant focal performance. In this case, it’s actress Gabriela Cartol, whose Evelia is so thoroughly self-effaced she plays as an intriguing cipher, deeply interiorized as if an echo of Jeanne Dielman. Except that Eve, who anchors every scene as she goes through her daily rituals of making beds, cleaning toilets and communicating with her superiors via a crackly walkie-talkie, doesn’t strive in isolation. If she appears as a blank slate, she’s also a prism through which to read the microcosm of Mexican society she encounters among the guests on her floor. Some of this is played for existential weirdness, as with an apparent voice actor narrating an Animal Planet-type episode, who obsessively orders more towels and toiletries to stockpile in the bathroom. In other sequences, Eve is put upon by a stylish, well-kept mother to watch her baby while she takes a shower, a recurring arrangement fostered by generous tips that also come with over-generous, one-sided conversation. Gradually, Eve comes out of her shell, goaded by a flirtatious fellow maid and given to indulge herself in an auto-erotic episode while an amorous window washer observes from the other side of the glass. Avilés’ calm, observational gaze situates most of her film amid a series of micro-dramas of Eve’s daily grind, but when a full-blown crisis erupts near the end there’s good reason to anxiously expect a dire denouement. When Eve finally manages to exit the hotel’s doors, it’s as if a forgotten soul has escaped purgatory.

Somewhere out on those same Mexico City streets, the titular clan of Midnight Family is also scrapping to get by. Luke Lorentzen’s breathless documentary hangs tight and tough with the Ochoa family, whose private ambulance enterprise offers its own view of Mexican society: chaotic, if not in tatters, a Darwinian fever dream in which the poor feed off the hopeless. The Ochoas function miraculously between a rock and a hard place, competing not only with other ambulance services, but dodging antagonistic cops. While seeming to be angels of mercy, the freelance paramedics also have to hustle their payday out of the grievously wounded and freaked out patients they rescue. Much of the film’s power (and thrill) comes from the immediacy of a camera squeezed into the ambulance with the Ochoas (17-year-old Juan emerges as the film’s savvy central figure), barreling with what feels like sheer reckless drive through the Mexico City night. There’s also real human pain and suffering which may not be easy to watch, as when a teenaged girl—whose nose has been broken by her boyfriend—begs for a hug, but has no money with which to negotiate the ambulance fee. (They take her anyway, hoping to get paid by her mother).

Half a world away from this urban frenzy, the middle-aged beekeeper of Honeyland enjoys an arduous but placid life in a rugged, untamed stretch of northern Macedonia. The unforgettable subject of this intensive non-fiction narrative is Hatidze Muratova, who has sustained herself and her aged and ailing mother in long isolation, on the honey from her thoughtfully cultivated beehives, harvesting in parity with the bees, to whom she always leaves half the honey. It’s a way of life, and apiculture, that harks back to bygone times, one that also helps Hatidze’s goods fetch top Euro when she ventures to the public markets in Skopje, toting her jars of golden nectar. All of that is threatened when a Turkish family arrives with its caravan of noisy children and cattle. While Hatidze initially offers a hand with the kids and provides an introduction to her beekeeping methods, relations soon sour. The family’s patriarch Hussein ignores the sacred “50/50” rule, in a campaign to make as much money as possible for his brood, and soon his bees are raiding Hatizde’s hives, destroying her livelihood. Hatizde is gravely distressed, yet has no recourse. “May God burn their livers,” declares her usually gentle and sweetly out-of-it mother, calling for divine retribution.

Macedonian filmmakers Ljubomir Stefanov and Tamara Kotevska capture a remarkable portrait of a life lingering at the edge of the modern world—a transistor radio appears to be Hatidze’s sole link to the 21st century—effectively using sparse light within shadowed interiors to give the faces of Hatidze and her mother an almost sculptural distinction. While strictly observational, the camera conveys powerful tenderness and intimacy, while also embracing the raw vigor and wild impulsiveness of the Turkish children, who often seem engaged in mortal combat with the farm animals they’re supposed to tend. Unafraid of beauty and sadness, Honeyland evokes kinship with all sorts of great realist cinema (whether Harvard Sensory Ethnography Lab, Pedro Costa or the postwar Italians) yet commands with a subtle emotional power that speaks to the simple joy of life abiding.