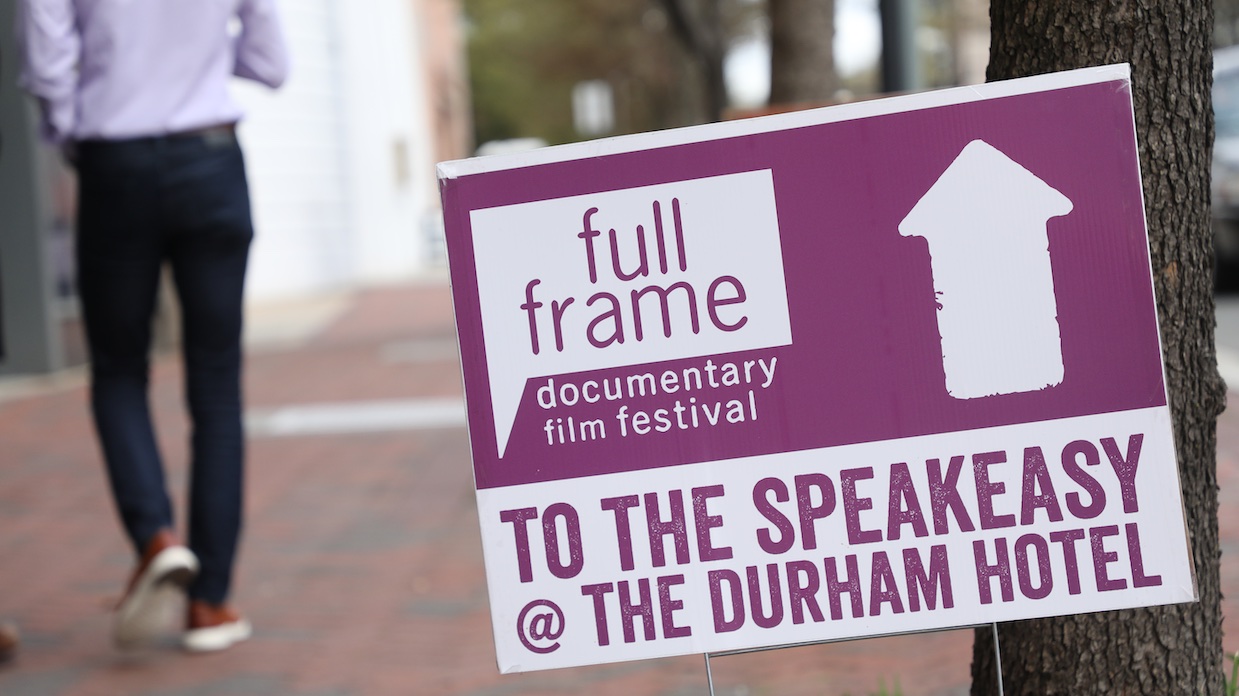 “DocsStillSoWhite: Moving From Ally to Accomplice” — the title inspired by a curriculum developed by the panel’s moderator Seena (“The Woke Coach”) Hodges — was the second of two diversity-centric A&E IndieFilms Speakeasy discussions presented at this year’s Full Frame. Speaking before an impressively packed house in The Durham Hotel lobby early on a Saturday morning, the upbeat Hodges began by reminding the four panel participants to be mindful of the allotted hour (while wryly apologizing for the “colonial construct of time”). She then asked the two teams of filmmakers — two black producers working alongside two white directors — to introduce themselves and to also discuss the genesis of their Full Frame-selected docs.

The two female media-makers spoke up first. Michelle Lanier, executive producer of Mossville: When Great Trees Fall, which delves into the annihilation of a historically black community in Louisiana by the petrochemical industry, referred to herself as a “documentary doula” with a passion for “helping to birth” nonfiction work. While Jane Gillooly, director of Where the Pavement Ends — which saw Gillooly returning to her hometown of Ferguson, Missouri to revisit the story of a blockade that once stood between (white) Ferguson and the neighboring (black) Kinloch — expanded on the diverse racial makeup of her team. She explained that she’d started the film prior to Mike Brown being killed and had originally thought it would center around a march against the barrier that she went on when she was nine-years old. She called that event her first witnessing of a “transgressive political act.”

However, as the years went by she began to doubt her own memory, so she decided to reconstruct the experience. She then approached Khary Saeed Jones, who eventually came onboard as both a producer and an editor. Though the New Jersey-born Jones had no connection to Missouri, what drew him to the project, he said, was his fascination with the virtual disappearance of the African-American town that had existed for so long beside Ferguson.

Alexander Glustrom, director of Mossville: When Great Trees Fall, was likewise fascinated by the fall of a once-thriving black town that he himself had no connection to. Lanier, though the first executive director of North Carolina’s African American Heritage Commission, was similarly an “outsider” to Louisiana. She stated that when Glustrom asked her to join the project she delivered a “mandate” before she would agree — “that there be a person on the team who represents both Mossville and filmmaking.” She then explained exactly why a person of color from the community was essential. “I can also be colonial as a black woman.” (She also ensured that people of color be represented on the team, right down to the interns.)

“People want desperately to be called an ally,” Hodges then noted, and he urged non-POCs to lead the way, to not just sit back and expect to receive the designation. “An ally is someone who is willing to make themself vulnerable,” Lanier added. She wanted to hear non-POCs speak about their own identity as a white person — something that is always expected of her as a black person. For his part, Jones focused on the necessity of allies acknowledging race and history.

Gillooly stressed “sharing a space of respect” as opposed to a hierarchy. She also discussed her attempt to re-visualize the vanished Kinloch, while many of her collaborators who weren’t from Ferguson were seeing it from a very different point of view. Glustrom suggested that all filmmakers should “know what you don’t know. Be open to learning and changing.” One of the first things he did after he received funding was to go with his team to anti-racism training, and he spoke of being fully aware that his whiteness made the production itself easier to navigate — especially when he had law enforcement, and even the FBI, trailing the shoot.

“Intent versus impact,” was the next subject Hodges wanted to broach, wich prompted Glustrom to reveal that he’d become close to one of his characters and that “professionalism” had gone out the door. As his subject got sicker and sicker from living in a toxic waste zone, the director felt guilty “about pointing the lens in his face.” Jones then told us about Julia Boyd, one of the leaders of the march Gillooly had participated in, who’d once written a passionate letter to a pastor and seemed the “heart” of the story. But she didn’t want to be seen on camera. The team decided that they had to respect her wishes and found audio clips that they used instead. Though this limited the scope of her presence, Jones felt that getting people to participate on their own terms was the higher goal.

Hodges then wanted to know, “Who gets to tell what story?” Glustrom admitted that halfway through the film he thought, “I should not be doing this.” But he came to the realization that “there’s no golden rule at all.” He decided that he had to be the one to tell the Mossville story because if he didn’t no one else would. (Which made me think of Steve James, long the white guy telling Chicago’s black stories brilliantly, while constantly questioning if he’s the right guy to be doing it.) “We had a lot of checking in with each other and a lot of checking in with the community,” Lanier added. Jones in turn spoke of recognizing the fact that filmmakers are “not clean…If you do this work you have to enter into it not believing that you have a certain authority as a filmmaker or storyteller.”

But what about securing funding as a media-maker of color? Hodges asked. Lanier lamented an “obscene crisis.” Her organization, Documentarians of African Descent Alliance (DOADA), was started precisely for networking purposes that could lead to financing. (The moderator then noted that this represented an excellent opportunity to be a disrupter.) Gillooly recognized that her history as a filmmaker often opens doors for her, which is not the case for POCs who may not have the connections that she has.

Turning to mentoring opportunities, Hodges wanted to know what could be improved. Jones advocated for a bigger push – as too many opportunities rely on luck. Glustrom mentioned that he brings teenagers onboard every single production he’s involved in. Lanier stressed the importance of black people from the community not only being on the team but also receiving a producer credit. “But how do you ‘check’ a white doc-maker when you’re just a part of the day crew?” an audience member chimed in, wondering how to call out racism without getting fired. Hodges suggested asking questions might be the best strategy as it allows the person needing to be “checked” to either explain their unintended racism or double down on it. Jones added that “growing your awareness of your allies” on the team (so you’re not the only one addressing the issue) could also be a solution.

And summing up the solutions to the issues wrestled with over the hour, the moderator then championed authentic curiosity, and also such concrete endeavors as taking that anti-racist training that Glustrom sought out. Refusing to work on a project that doesn’t include at least three people of color was Lanier’s two cents. “Be inclusive, and not just to have a (non-white) face on the team,” Glustrom stressed. Gillooly focused on the necessity of internships, while Jones spoke of “an actionable commitment” by always bringing people along with you. Which prompted Deidre Haj, Full Frame’s game-changing director, to take the stage and call it a wrap by urging every filmmaker in the audience to require “qualified” people of color on every shoot. And not just when telling those POC stories.