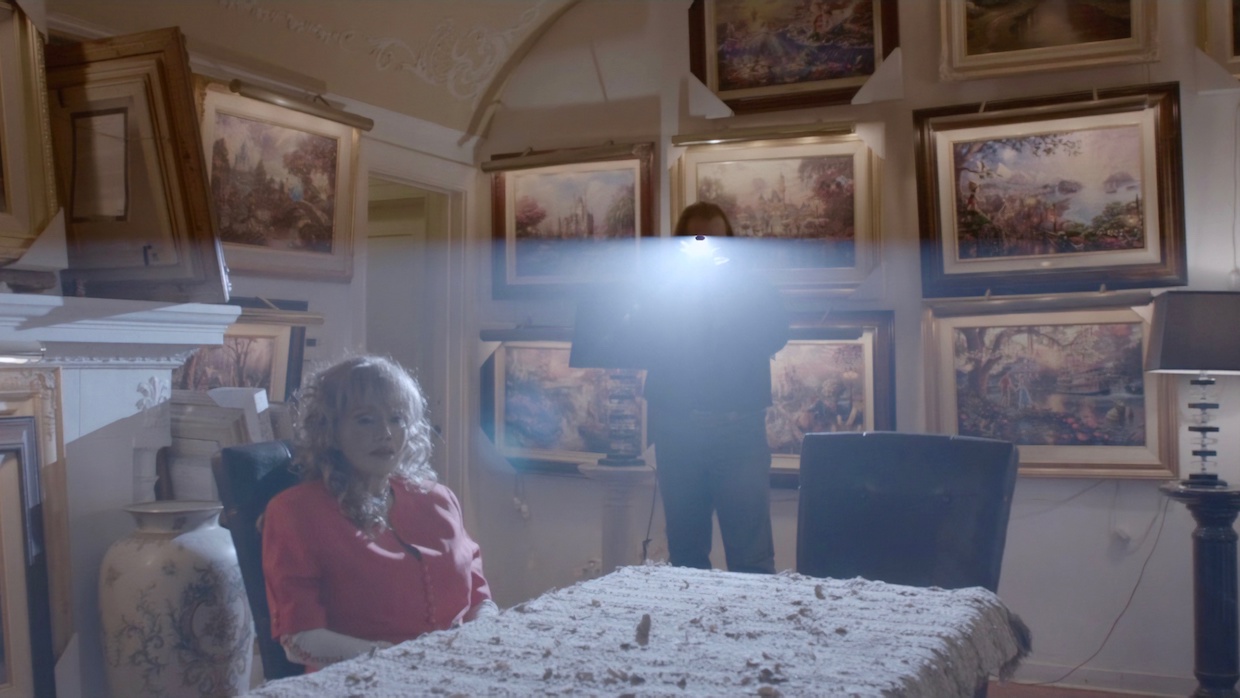 Few things at this year’s San Francisco International Film Festival (SFFILM for short) felt more San Francisco than being at the packed-to-the-rafters Castro Theatre on Good Friday to cast one’s eyes recklessly into the image pool rippling across the 24-foot-high screen. The visuals belonged to Maya Deren, the mystical dynamo of American independent cinema, whose core of 16mm work (At Land, The Very Eye of Night, Ritual in Transfigured Time and Meshes of the Afternoon) is a motherlode of the avant-garde, and fervent evidence of a mid-century bohemia that bloomed on the West Coast, a legacy kept alive through outfits like San Francisco’s venerable Canyon Cinema.

Onstage, keyboardist Theresa Wayman and drummer Stella Mozgawa of the group Warpaint accompanied the projections, as Deren loomed above, athletic form always in motion or silhouetted in alluring mystery. Their original music  sustained a driving pulse through much of the screentime, Mozgawa’s drums an energetic analog for Deren’s choreographic verve and Wayman’s keyboards conveying mood and texture, even evoking some of John Carpenter’s minimalist hypnosis. This was definitely not the sometimes abstract noodling that can accompany these sorts of live soundtrack matchups.

SFFILM isn’t unique among festivals in its regard for early, silent or what used to be called underground cinema, but each year the event finds exciting new ways to revive and more deeply appreciate such things, reminding audiences of the city’s intrinsic role in fostering the art form. Deren’s dream logic and visual expressiveness with a 16mm Bolex anticipated so much to come, using the raw materials at hand (her own body, a beach, a Hollywood Hills rental, her husbands as collaborators) to invent her own cinematic language. So it was thrilling to see, some 75 years after Meshes, a kindred spirit moving through a film that was produced amid great hazard and with the most common tool available—the cell phone—as its filmmaker-subjects aspired to give a poetic visual meaning to a desperate situation.

The POV documentary Midnight Traveler charts the flight of Afghan filmmaker Hassan Fazili, his wife—the actress and filmmaker Fatima Hussaini—and their two young daughters, Zahra and Nargis, after the Taliban marked him for death, and the Taliban leader who was the subject of his television documentary was murdered. The clan is compelled to leave a year’s refuge in Tajikistan when its asylum request is denied, and after a brief return to Afghanistan embarks on a three-year journey from Turkey to Bulgaria to Serbia to Germany.

Through it all, the family (including the kids) capture the experience on cell phones. SD cards were copied and dispatched through various means to American editor and producer Emelie Mahdavian, whose winning presentation two years ago at the Camden International Film Festival’s Points North Pitch won the project crucial momentum. Put together in close (if usually long-distance) collaboration, the film thrives on the raw immediacy of the family’s struggle: Long walks through forests towards uncertain borders, kidnapping and extortion threats from human smugglers, gang violence and, always, the grinding boredom of life in refugee camps, waiting for an overwhelmed and overwhelming bureaucracy to address their case. Humor abounds, especially in the married-couple banter between Fatima and Hassan—between whom questions of faith, fidelity and artistic purpose spark lively flashes of spirit—as do moments of tenderness amid episodes of chaos. From time to time, the diaristic and often roughly photographed scenes yield to dreamlike rushes of images, claiming beauty out of the sky. Those moments offer welcome respite from a steady backbeat of anxiety, so skillfully personalized is the family’s dilemma.

The question of displacement also arises in The Seer and the Unseen. In Sara Dosa’s charming trek to the wild outdoors of Iceland, it happens that many of the film’s imperiled subjects are invisible, perhaps only mythical creatures, who communicate through a kind of medium. The kindly Ragnhildur Jonsdottir, the film’s heroine, is an elf whisperer. The elves, whom half of the island’s population believe are real, are unnerved by an apparently pointless road construction project that will lay waste to a lava field outside Reykjavik. It is home not only to the elves, but other spiritual entities out of Icelandic folklore, dwarves and trolls—not always friendly creatures who shouldn’t be angered. If much of the story eases the audience into the idiosyncratic belief system and sweet-natured ways of Ragga, as she’s called, Dosa builds drama out of the fight to stop the road and save the lava field. Ragga and her activist group, Friends of the Lava Conservation, face off against the police in one of the most non-violent non-violent protests ever committed to tape. It’s a measure of the wide disparity in cultural temperature between a United States ripped apart by neo-Nazi marches and police shootings and Iceland, where the cops and the protesters gingerly attempt to out-polite each other. Though the film might, at face value, seem to propose a bit of a joke about superstition, what it delivers is a winning portrait of empathy.

The Seer sat well in the festival’s Launch sidebar—which calls special attention to five selections by filmmakers-to-watch, slotted as world premieres—alongside Colewell, which takes its name  from the small Pennsylvania community where writer-director Tom Quinn’s low-key drama unfolds. Karen Allen—yes, she of Raiders of the Lost Ark and Starman—is, as ever, a thoroughly welcome presence onscreen. The actress hasn’t been as far off the radar as some might think, popping up in the occasional festival indie. Her performance as Nora, a rural postal clerk who is a human switchboard for all the souls in her town, shines in its exquisite subtlety. When the US Postal Service decides to shut down her outpost, Nora’s contemplation of advancing years and roads less traveled takes on mortal urgency. There is not so much incident as a quiet watchfulness and a knowing feel for lives lived off the main roads. Along with fine supporting turns by Hannah Gross (as Nora’s prodigal daughter) and Kevin J. O’Connor (as a sympathetic fellow postal worker), Allen’s performance conveys a wealth of feeling in a glance or a pause. It’s far beyond time to see her in more movies.

The festival’s expansive programming included a knockout assortment of international films, particularly in its focus on Asian and Middle Eastern directors, but I kept getting drawn back to the modest, often off-kilter encounters transpiring in marginal corners of American life. Over the Rainbow was exemplary in that regard. Jeffrey Peixoto takes a deep-dive into the lives of Scientologists, accumulating interviews and interactions over a span of seven or eight years, to get somewhere inside his subjects’ heads and experiences that other documentaries never approached. Empathy, again, is key, as the filmmaker basically takes the side of the faithful (and one young woman who has dropped out of the religion), or, at least, views them with a non-judgmental eye. The effect, coupled with some of the stranger personalities on display (such a woman who is a passionate dealer of Thomas Kinkade paintings), feels something like Gates of Heaven-era Errol Morris or a less grotesque Ulrich Seidl, circa Jesus, You Know. (Peixoto has even spoken of using a chunky camera to film the interviews, faintly suggestive of Morris’s bespoke Interrotron). In the end, it’s not all that much about Scientology as the nature of belief and intensely human need to embrace religious systems. Peixoto’s compassionate lens had lots of company.