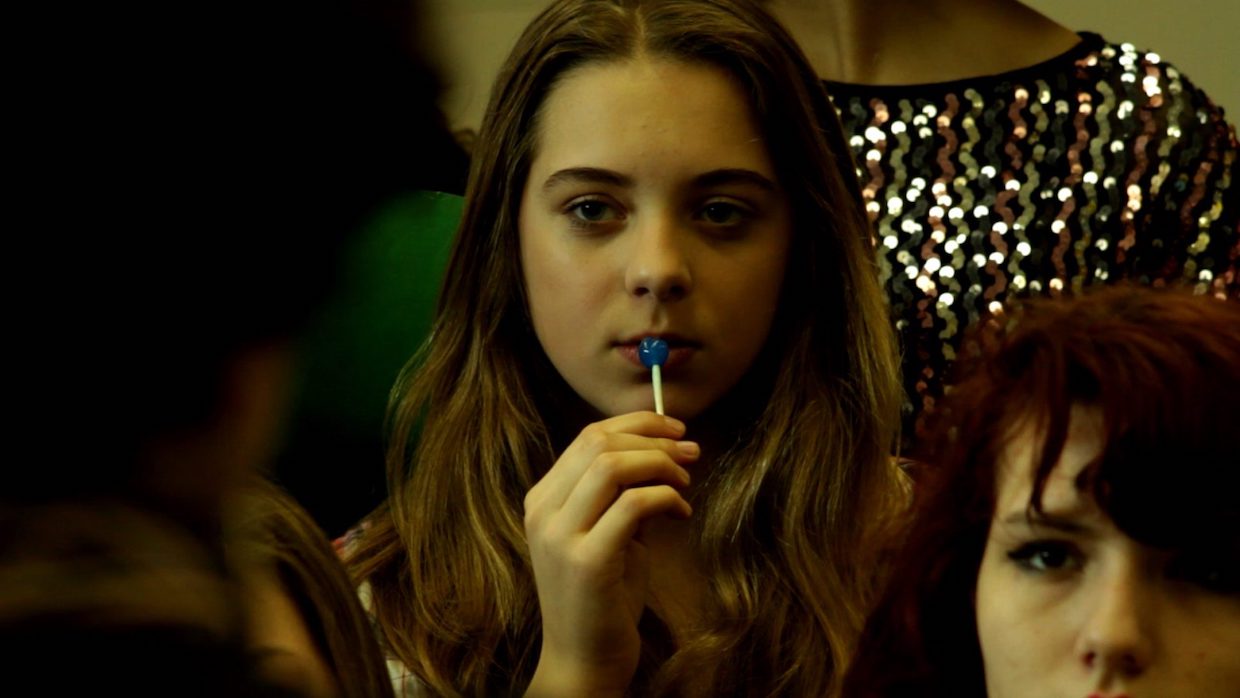 Blood and guts in high school is a theme that never loses its appeal to filmmakers, even as its universality—from Zero for Conduct to Heathers—demands greater risk and originality from filmmakers who, arguably more often than not, are recasting episodes from their own diaristic memory banks. This year’s Tribeca Film Festival, which wrapped up last week, served up a predictable share of films that fit into the coming-of-age category, yet the most notable of those efforts proved to be anything but cookie-cutter.

The best film I saw at the festival, Jennifer Reeder’s Knives and Skin, even felt like something brand new. Described by the Chicago-based writer-director as a “Midwestern gothic teen noir,” the drama ably flips the script on all the Todds and Davids whose names have pervaded and also shaped a certain kind of dark, surreal sector of American indie cinema for the past 30-plus years. The disappearance of a high school girl named Carolyn (Raven Whitley) after a football game offers a kaleidoscopic view into the private lives and strange currencies of a suburban community. It’s a place where the adults are all messed up with secret affairs and suffocated dreams, and the kids—especially three sophomore girls in Carolyn’s inner circle, Joanna (Grace Smith), Laurel (Kayla Carter) and Charlotte (Ireon Roach)—come to assert their own agency over the depressed, horned-up and weirded-out grownups in their lives, finding strength and, in one case, a blessedly lyrical romance as chaos seems to spin around them.

Seeded in a series of short films Reeder has made over the past few years, Knives and Skin thrives not only due to its very game ensemble, but the considerable attention to finer aspects of production and costume design, cinematography and score, all laced together with intricacy, meaning and a hankering after the uncanny. Early on, when a moody nocturnal sequence suddenly sparks alive with splashes of magenta and indigo and then green sparkles, I realized Reeder’s concept had at least as much to do with sequined psychedelia of something like say, The Wizard of Oz, or Kenneth Anger’s Puce Moment, as with more obvious footnotes. The film’s most winning element, along with its candid and sharp-tongued teen dialogue and its punk-feminist attitude, is its musical instinct. Several times in the story, the camera visits a high school choral class where the kids sing a cappella versions of new wave hits (“Our Lips Are Sealed,” “Blue Monday”), a Greek chorus that works as an emotional trigger and also offers clues into how to read the narrative and its flyover state magic realism.

Debut filmmaker Bora Kim’s House of Hummingbird (a beautiful title) also looks out from a teenage girl’s eyes within a dysfunctional family, this one living in Seoul in the mid-1990s. The Korean writer-director, who studied her craft at Columbia University, sustains a subdued mood for the film’s deliberate two-hour pace, one that befits its lonely, existentially beleaguered heroine, the shy and insecure Eun-hee (Ji-hu Park). Her family, which runs a demanding rice-cake business, offers scarce nurturing and chronic emotional and even physical abuse, whether it’s from a bullying older brother or a hot-tempered father. Her browbeaten mother mostly zones out. Meanwhile, Eun-hee’s life as an eighth-grader feels like an erratic search for connection. Episodes of the mildest delinquency (karaoke! cigarettes! shoplifting!) with an unreliable bestie and the wavering attention of a fickle boyfriend, who is the undeserving recipient of a very special cassette tape, don’t help much. Meanwhile, there’s an unexpected death in the family and a mysterious lump by Eun-hee’s ear that, by the time anyone responds to her expressions of concern, requires a risky surgery.

In all of this, Eun-hee finds a unique relationship with the new teacher Kim Youngji (Kim Saebyuk) at her after-school Chinese language “cram school.” What’s refreshing are the rhythms with which the filmmaker structures their encounters, which gradually open up Eun-hee emotionally and instill in her a desperately needed sense of self-worth. Rather than situate the teacher as the broadly inspirational figure of Oscar-nominated cliche, the film outlines something that feels a good deal more Zen. Kim Youngji is a mystery to Eun-hee, the sort of independently minded adult she has never met before: a role model, maybe; a wise confidante, absolutely. Within their bond is Eun-hee’s encouragement to grow into herself—she aspires to be a cartoonist—but as with everything else in her life there will be repeated left turns,  including the intrusion of historical events specific to the time and place where Hummingbird is set. The film, which won prizes for best feature, actress and cinematography in an international narrative, doesn’t resolve Eun-hee’s situation, but observes with a lot of thought and attention to detail how she might begin to ably navigate it.

Edgar Nito’s The Gasoline Thieves won the prize for best new narrative director, a hard-earned distinction that speaks to the scrappy production’s ability to convey a contemporary Mexican underworld saga with finger-snap immediacy and gritty verisimilitude. Coming-of-age trappings give way to a gnarly drama about black-market fuel “liberated” from corporate oil fields by teams of so-called huachicoleros, the gasoline thieves of the title who face extreme risk from several directions, most of all their volatile bounty. (Witness the January pipeline explosion in central Mexico that claimed more than 90 lives in January.)

The fable of adolescent Lalo (Eduardo Banda, a newcomer like much of the young ensemble cast) is thus introduced in a fateful opening sequence set during a moonlight excursion gone wrong. In his poor rural village, only the bandits have money to spend. The kid’s awkward affections for a pretty classmate, who suggests Lalo might impress her with the gift of an iPhone, set off a chain of events that lead him to the darkest possible place, suggesting that, against such a desperate and corrupt backdrop, what might otherwise be a relatively harmless pursuit can turn deadly. Nito and his team manage both the macro and micro elements of the story with visual aplomb, pulling off nighttime action sequences and glorious, sun-drenched landscape shots with a sharp clarity of detail, while evoking aspects of documentary reportage that keep the film’s perspective tethered to the plausible. Although set in much the same fatalistic terrain as Mexican-set dramas like Ridley Scott’s The Counselor, the film sticks hard to a straightforward premise, avoiding anything flashy or florid. The audience can work out the social message on its own. What’s undeniable is how effectively the film delivers the goods.