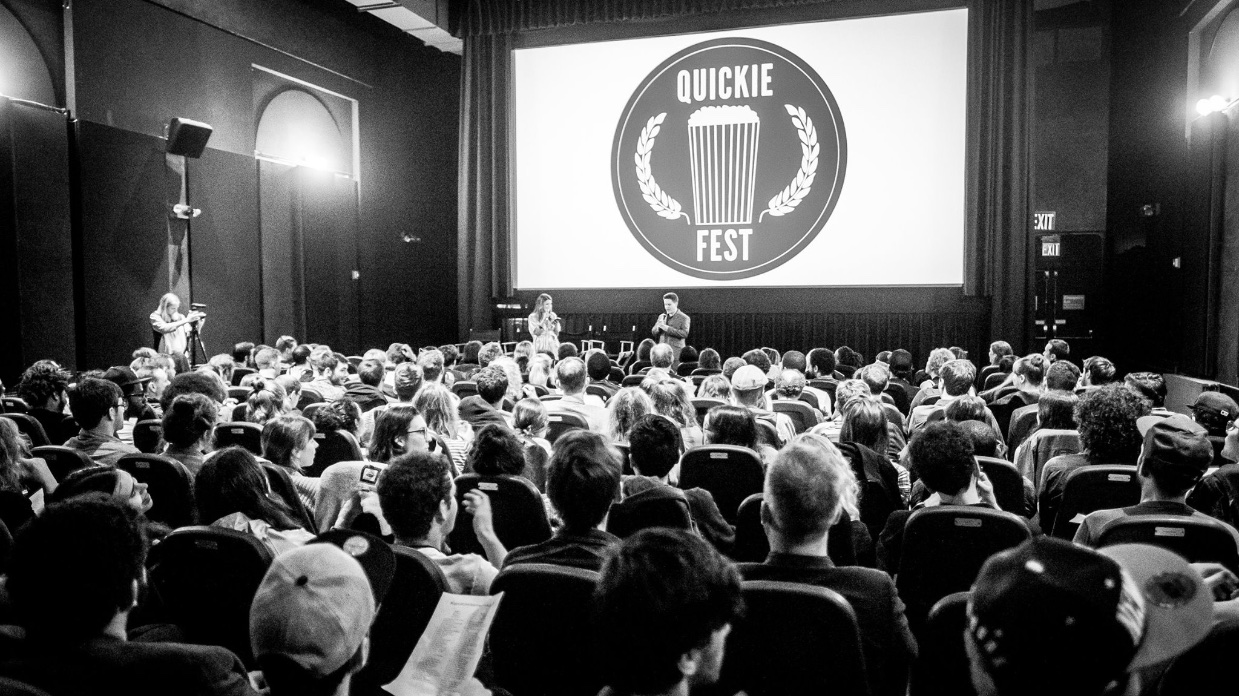 Arriving at New York’s SVA Theater this Saturday, June 29, is the seventh edition of Quickie Fest, a twice-yearly festival that showcases short films that time out at 60 seconds or less. There’s a strong comedy element to the selections, although the hosts and curators, Anna Roisman and Michael Muntner, say the films include docs, dramas and music videos as well.

Roisman is a comedian, actress, singer and writer, and host of HQ Words. Muntner is a teacher, writer, improviser, comedian, filmmaker and actor, and he is one half of the comedic duo Garbage Farts. Below, the two answer questions about building and sustaining a live event for very short films.

Filmmaker: There’s been a renewed interest in short-form content recently on the industry level, with the forthcoming launch of Quibi, which is very much targeting handheld devices. Why did you create a platform to showcase shortform work theatrically, then? Why is it important that these films be shown in a theater?

Anna Roisman: Honestly? It’s doable! As content creators ourselves, we wanted to see if we could elevate our work and showcase it in a fun, live environment. We come from a comedy background, and most of the work we’ve ever created was just uploaded to a site and boom! You pray for views. It’s really satisfying to showcase work (even 60 seconds of it) in front of a live audience, and hear reactions IRL. We spend enough time on our phones! Of course views are still fun and addicting, but there’s a really special sense of accomplishment when you watch your work screened in a movie theater. For me and others, content creators are challenged to think outside the box, and see if they can captivate a story in a short amount of time that looks cool enough to show up on the big screen. The audience reactions change everything for these films!

Michael Muntner: As a creators ourselves there is no better feeling than hearing your laughs. When you watch a movie on the small screen you miss out on that shared experience. In a theater full of people sometimes the laughs are so big the audience misses out on the next joke, and that’s kind of awesome. When you release something online you might get a lot of views, but you never really know if people enjoy what they’re watching. There is no lying in a theater. It’s a very honest audience, and I think our creators crave that.

Filmmaker: How does the selection process work? Are people creating films just for the festival?

Roisman: When selecting, we ask for something that showcases your work and style. Initially, we didn’t want people to go out and spend a lot of money on a production and then maybe not even get accepted to the festival. This process may change as we grow. We’ve already considered it. Because we’re aware that this is pretty much the opposite way to select than other festivals! When we see people’s work, we really are looking for basic skills of how they make something technically — do they know how to tell a story, are the pieces all there (sound, lighting, editing), etc. The bar has been raised over the years so we always encourage people to watch some of the Quickies that have been successful! A lot of people now make something specifically for the festival, though we don’t require it. But hey, it’s pretty cool that they do! We love it.

Muntner: Creators are asked to apply with a previously produced movie so that we can get a sense of their style and what they are capable of. Some filmmakers already have 60 second or less content that they want to apply with and then show in the festival (and that’s okay), but the majority apply with something great they’ve made in the past, and then create new movies just for Quickie Fest.

Filmmaker: What was your motivation to start this festival, which you have self-funded? Is there a broader business plan that it’s part of?

Roisman: Our motivation kind of coincided with the space I used to work in. I had this cool space that I could have a small screening at, and Mike was a teacher so he could borrow a projector, and we thought we’d try it out! When we started, we had no idea how this would go. We thought, well, we’ll get alcohol and pizza, and show some movies! The first festival was so successful that we packed the place way too much. People were turned away at the door, because of fire safety… you know. Don’t worry, my old job figured it out and I no longer work there! (it’s a joke we always say about why we moved the festival to a proper theater). Now, we have more of a plan. We have a TV show version of the show that we’d love to sell…if you’re a producer… hey what up? We’d truly love to partner with a company moving forward with the festival because after doing seven of them on our own, it’s tough on us! We have other jobs and it’s a lot of work. But it’s always rewarding. We love it though, so we want to grow it with the help of other sponsors and/or partners. People live for this show. We want to do a West Coast one! Quickie West, here we come.

Muntner: The initial impulse was to put on a great show in a space we had. We both love movies, love telling jokes and being in the spotlight. We’ve participated in other video shows and knew we could do a great one. Honestly the way it came together really was kismet. Anna had her office, and I was going around the city in a zipcar picking up equipment for the show (like a speaker system, projector and screen), and there were definitely moments when I thought it might not come together. Even the night of the first festival I thought the sound wasn’t going to work, and I probably had one of my worst panic attacks. It was going to be Fire Fest before there even was a Fire Fest, but thankfully it worked! The first two fests were in Anna’s office, and were packed. People were standing on furniture. There was no room, and it was a fire hazard. But then we moved to a bigger venue, a real one, and here we are again about to have our seventh Quickie Fest at an even bigger space, and I think that’s pretty cool. We just want to get bigger and bigger. I want more people to apply, more festivals and more sold out shows. I want Quickie Fest to be the next Tribeca. Also, I wouldn’t hate sponsorship either…

Filmmaker: What have been some highlights of previous years — notable films that you feel the festival was able to give a boost to?

Roisman: We started roasting each other for one minute at the beginning of each show. It’s mean and cruel and really gets people in the spirit of the one-minute format! I love it, mostly because I get to make fun of Mike publicly instead of on our own. I also love that we spend a whole night (usually til the early hours of the morning) putting together the program. It’s tough and we want the perfect order, and we fight, and we make up, and we eat a lot, and it’s a real whirlwind of a night! Someone should make the quickie fest movie about us putting together this festival, because it’s a funny process. Some films that I’ve loved are Comedians In Cars Dropping Acid, by Nick Smith and Drew Freed, which is exactly what you imagine it is. I also love how Jared Hacker made this movie about NYC and how gross it is, and the audience went nuts for it. I didn’t expect it to win, but it’s always different in front of a crowd!!

Muntner: I have personal favorites like a slow-motion 747 airplane flying overhead to the most relaxing music you’ve ever heard. In a sea of fast short-form content moments like that transcend all others. There was a video by the Breakfast Boys (Matt Rain and Scott Lamica) that I hated for the first 30 seconds, but loved for the next 30 seconds. When the audience loved the first 30, I turned to Anna and said they were going to lose it for the next half, and the audience did. They won both the Special Jury and the Audience Awards. We’ve always had some talent scouts at Quickie Fest, and creators have gotten meetings with Comedy Central and some have gotten representation as well. It helps to have a large audience react strongly to your content.

Filmmaker: What’s the single biggest piece of advice you can give to a filmmaker hoping to make a memorable film that is 60 seconds or less?

Roisman: Don’t try and make it complicated! Tell one story, keep the audience on their toes, and then kill them with some kind of emotion near the end. Also, it doesn’t have to be 60 seconds! Sometimes quicker is better! That’s more than one piece of advice. So, here’s my 1: Make me laugh/cry!

Muntner: If you’re telling a joke don’t tell it in the first 15 seconds. Keep us guessing. Make us want it. If you can get a few great moments into that one minute you’re a winner and a star.