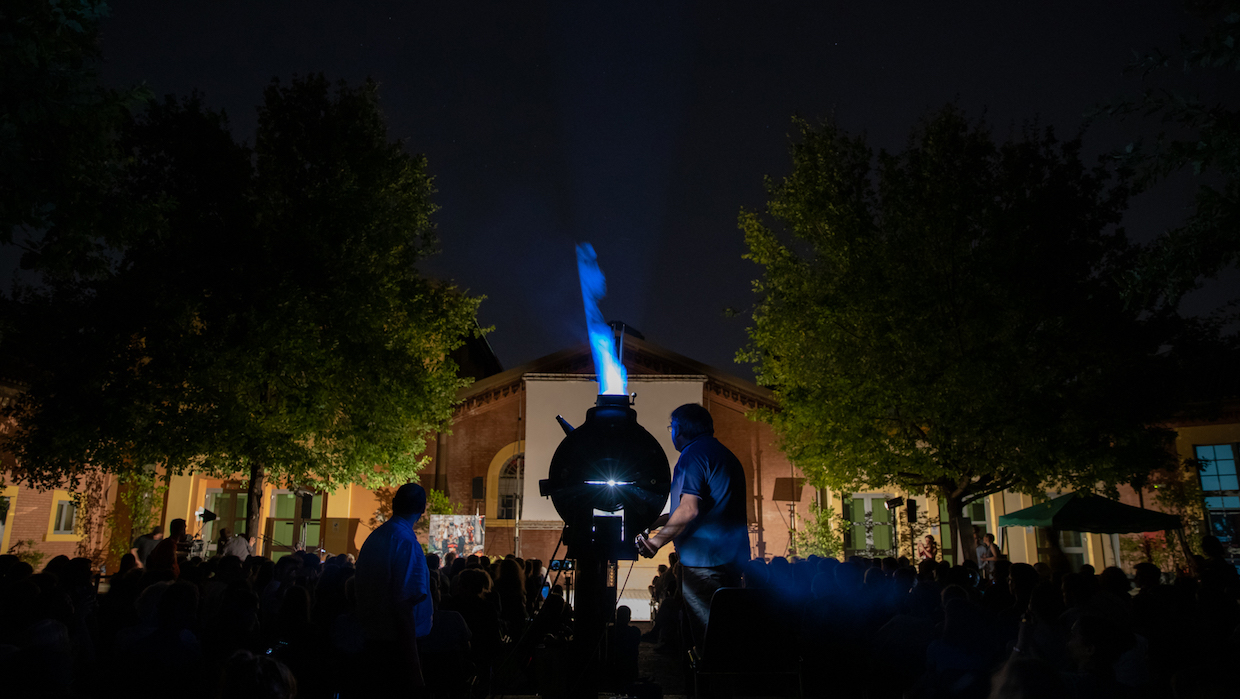 by Christopher Small
in Festivals & Events
on Aug 1, 2019

“A whole week of fun,” reads a prominent advertisement in the background of the final scene of Henry King’s State Fair (1933), as Janet Gaynor and Lew Ayres slip out of frame in a lovers’ embrace and “The End” unfurls behind them on a billboard. This happened also to be my final image, projected in 35mm on the screen before me, of Il Cinema Ritrovato, the blissful, week-long festival in Bologna, Italy that each year offers itself up as an event of seemingly endless Elysian splendour.

But of course, like the Iowa State Fair in King’s movie, it had to come to an end. In the seven days I was in town, I saw 28 features, several episodes of two silent serials and countless short films. I sampled movies from—among others—South Korea, the Ivory Coast, Norway, Sweden, Algeria, Egypt, the German Democratic Republic, Iran, the USSR, the USA and Burkina Faso.

It is close to a cliché at this point to state that movies projected in a cinema with an audience is a concept has been under siege for a long time. Last month, my matinee screening of Avengers: Endgame had the first large crowd I had seen in a multiplex in years. It was perhaps inevitable that something would tarnish an otherwise inoffensive experience: ugly digital tears spread across the centre of the image for much of the movie and an overworked staff did not respond to multiple pleas for it to be fixed. The multiplex’s largest screen was full and we all just sat there and tried to ignore it.

Inevitably, new forms of visual media dominate most people’s lives far more than movies do. What we interact with in our routine existence rarely conforms to the kind of things we could call “movies.” This sea change has forced institutions of cinema onto the back foot to respond in turn. Like many of such places, film festivals are scrambling to cultivate specific audiences, to accommodate technology like VR and to attract high-profile talent, even though there are more festivals for this same talent to be spread across than ever.

When at Il Cinema Ritrovato, it is easy to take massive crowds for granted. Given everything happening in the outside world of moviegoing, it is surreal to be in Bologna and to find yourself elbowing past irate students and belligerent septuagenarians to secure a good seat—any seat—at a eighty-year-old movie by a filmmaker that few but the most hermit-like of archivists have even heard of. When I first attended Il Cinema Ritrovato in 2014, rare was the screening that actually sold out. Queueing wasn’t the vicious, strained affair that it has become. I don’t remember having to stand at the back of the room for a Scandinavian silent because every seat and all the space in the aisle was taken. In those halcyon days, oddities in the program were a sure bet if you were running late; other than the typical clique of devotees, you could rely on getting a good seat.

The moment I realized things had changed was several years ago, when I had to sidestep a world-famous film critic in his mid-seventies, who was lying virtually flat on the wood floor in the aisle for a two-and-a-half-hour silent serial. In the years since, it has become common knowledge that you should arrive at any given cinema at least 15 minutes before the film is scheduled to start. That there is more space at the early morning sessions is true only a fraction of the time. There is also the problem articulated to me by a stranger ranting after we both got turned away from Jean Epstein’s Finis Terrae. She raved about the injustice of being turned away; she had been waiting her whole life to see this film, she said. I agreed it was annoying but, like the usher we just spoke with, I reminded her that there was a repeat screening the next morning. “Yes, but 9am—it’s impossible,” she replied.

Il Cinema Ritrovato provides its own answers to the question of our splintering film culture. By asserting the provisional, the fragmented, the detritus of an era preserved by archivists but forgotten by the public as cinema, the festival’s project offers the hope that new media might also have the same role to play for audiences of the future. For instance, one major highlight was a restored print of Max Fleischer’s joyous and effervescent Vacation, a nine-minute entry in the Fleischers’ highly successful, 62-part “Out of the Inkwell” series. In it, Fleischer himself features as a capricious live-action animator tormenting his protagonist with his pen, close to thirty years before Duck Amuck. Another was F.W. Murnau’s lost Satanas—or should I say, two one-minute fragments of it. The first segment had the ethereal quality of something from Martin Arnold or Peter Tscherkassky, experimental filmmakers who denude classic films of their narrative, leaving the protagonists to float through a confusing world with no seeming order or reason. The second surviving stretch was an erotic single-shot spectacular, removed (and therefore saved) for reasons of censorship in Spain. In this fragment, a rotund, inebriated Pharaoh lies on his throne with a half-naked woman draped over him. She picks his pocket in full sight of him, giggling impishly and toying with his obvious love of depravity. The whole thing could be a TikTok video posted on Weird Twitter.

But Vacation and Satanas were revived at the festival in as much majesty as any expensive new restoration. Both were projected on the wall of the Cineteca library from a hulking carbon-arc projector, an ancient, leviathan-like machine that burns carbon rods to create the light necessary to project images. When in operation, the smoke from the rods circles in the pale blue light emitting from the top of the projector. Once the image appears on the wall, everybody falls silent. The communion between screen, audience, projector, and projectionist (his operation of it is a sight in itself) creates an intense involvement with even the smallest, most forgotten, most fragmentary of films.

Unsurprisingly, on the other end of the spectrum, some of the biggest crowds assemble at a sidebar dedicated to screening “vintage” Technicolor prints of classic films by major directors. It is a miracle that in 2019 it is still possible to have an experience at Indiscreet, a 61-year-old adaptation of a forgotten stage play, analogous in crowd since to the likes of Avengers: Endgame. Where the buzz in the air at the Marvel film was electric enough just about to sustain my interest, at Indiscreet it amplified my reaction to the film. To see it there was to see it with a devoted audience in thrall with every second.

Il Cinema Ritrovato, in these moments, is nothing less than a paradise, one in which discovering the joy and the treasure of classical cinema is not a private but an intensely public act. At the time the movie was released, both Cary Grant and Ingrid Bergman had been huge stars for years and in many ways the film was made to cash in on this nostalgia. A spectator in 1958 would likely pay to see Indiscreet for the pure pleasure of Bergman and Grant’s company, basking in their charm and reliving moments foundational to the stars’ mythos and celebrity. This is all while sharing this with an audience presumably receptive to the exact same things—why else would they be there otherwise? Whether this is a reactionary, nostalgist fantasy on my part does nothing to deny that I had that exact experience six decades later in a cinema in Bologna, nestled among an audience of international cinephiles. If this is nostalgia for a kind of spectatorship that had began to fade even by the time I was born, it is also an acknowledgement that even commercial forms of the past have the possibility, when revived, to renew and reenergise the present.

My own week of fun, to go back to King’s State Fair, shared with friends, colleagues, and masses of dutiful movie buffs speed-walking through 100°F heat, was among other pleasures an inspiring reminder of the value of repertory film as an ever-renewing font of inspiration. The fact that cinema is by and large an industrial artform is only truly grasped when the micro—individual artistic temperament—is seen in the context of the macro—the endemic forms of the industrial filmmaking systems of the past and present.

For the initiated, sinking into the hot bath of the cinema of the past is pure pleasure—but in a context like Il Cinema Ritrovato, the rediscovery project takes on an historical dimension lost when we isolate Great Masterpieces from the rest of this enormous resource. Instead, it is to truly live cinema again.