“We Decided Early On That There was Never Going to Be A Single Lock-off Shot”: DP Erik Wilson on The Dark Crystal: Age of Resistance 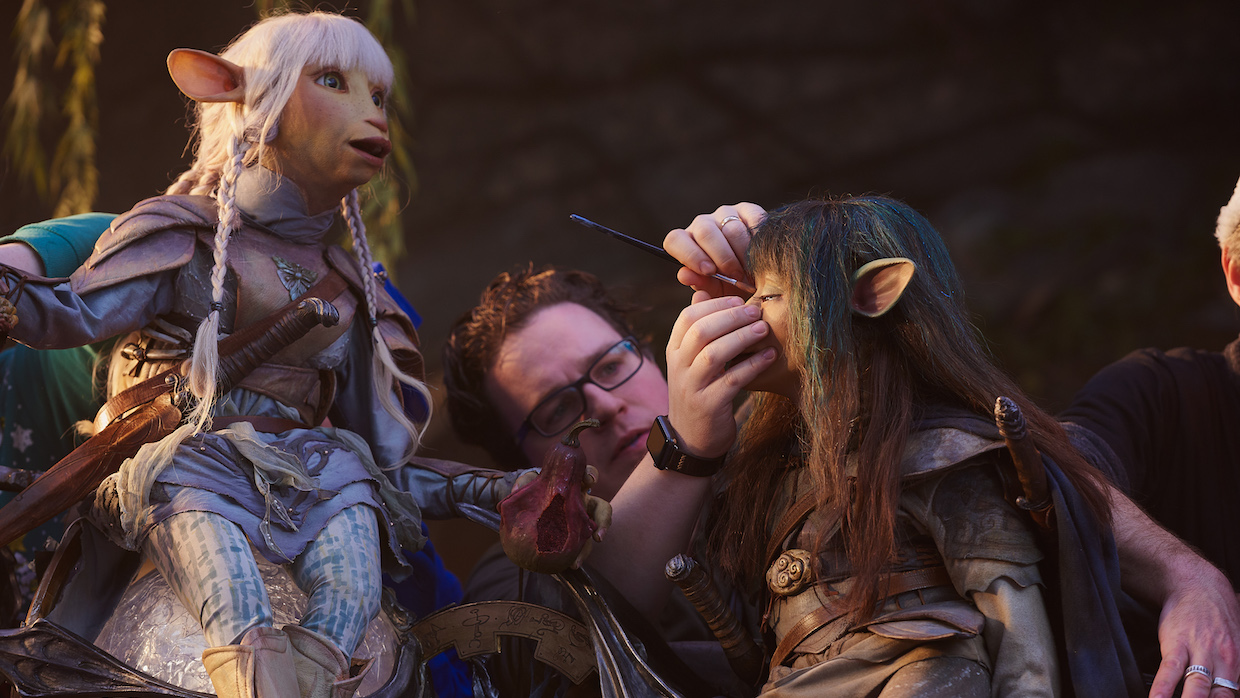 On the set of The Dark Crystal: Age of Resistance

by Matt Mulcahey
in Cinematographers, Columns, Interviews
on Aug 30, 2019

The original Dark Crystal was released on December 17th, 1982 , four days before my fifth birthday. I don’t remember exactly when my mom took me to see it. I can only tell you that when she did, the movie–and its lizard-like villains, the Skeksis—scared the crap out of me. There is a generation of kids who were similarly terrified and enthralled by the film, which was much darker than unsuspecting parents anticipated from Jim Henson, the man behind The Muppets and Sesame Street.

Erik Wilson—the cinematographer of Netflix’s new 10-episode prequel The Dark Crystal: Age of Resistance—was not among the childhood initiates. “I’d never seen it before I heard about this project,” Wilson said. “Even if I’d known about it growing up I probably wouldn’t have watched it because I was so easily scared. So I came to it with fresh eyes, so to speak. You watch [the original] now and you think, ‘Wow, this is puppets, but it’s quite hardcore.’”

With The Dark Crystal: Age of Resistance out today on Netflix, Wilson walked Filmmaker through the show’s marathon 180-day shoot.

Filmmaker: My son loves to go to the movies, so I’ve seen just about every kids’ flick in the last three years. Paddington 2 is my favorite. I love your work on that film. It’s just so gorgeously composed and designed. Paddington 2 and The Dark Crystal: Age of Resistance are completely dissimilar aesthetically, but they both have crossover appeal for kids and adults. Did Paddington 2 have anything to do with you getting onto The Dark Crystal?

Wilson: My other credits may have gotten me approved by the higher-ups, but [Age of Resistance director] Louis Leterrier was my way into the project. I did a week of pick-ups on a film of his, The Brothers Grimsby, and he was fantastic. It was a tricky and complicated shoot, but he had this amazing, can-do attitude. So for me the appeal of The Dark Crystal was more about the fact that Louis was doing it. 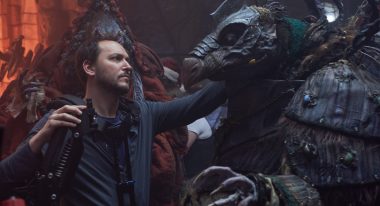 Filmmaker: Louis operated one of the cameras on The Dark Crystal. It’s not completely unheard of for that to happen—Ridley Scott famously likes to operate—but Louis even did the Steadicam shots on the show. That’s a very specialized skill. Have you ever worked with a director who also operated the Steadicam?

Wilson: No, never. It was quite extraordinary considering the length of our shoot and the amount of time each day he would [fly the Steadicam]. It was superhuman. The genius of it is that he is right there in the middle of the action and could communicate with the puppeteers immediately without even having to walk a meter. We decided early on that there was never going to be a single lock-off in the whole show. Nothing was ever going to be static. Whether it was on dolly track or Steadicam or handheld, there was always going to be movement.

Filmmaker: Did you often shoot multiple cameras or were you not able to because you’re hiding puppeteers all over the place?

Wilson: Hiding puppeteers was tricky, but Louis wanted us to always set up two cameras. If you get something usable with the second camera, great, and if not it just doesn’t make it into the show. It’s so difficult to get these moments of magic where everything fits together, so you just have to keep shooting. Basically it was two cameras the whole time, Louis on one and me on the other.

Filmmaker: What was your camera and lens package?

Wilson: The original movie was anamorphic, so I thought anamorphic would be great for the puppets. Louis had this very strong thought of using a larger format camera. Red had come out with a slightly larger sensor camera and I did research and found out that there were some Cooke anamorphics that would cover the sensor. Then we could use all of the anamorphic imperfections on the top and bottom of the lenses to make parts of the frame slightly out of focus, which helped to hide puppeteers’ heads. There are still quite a few times in the show where puppeteers’ heads are in frame, but they’re too soft to actually see.

Filmmaker: Those are the newer set of Cooke Anamorphic/i lenses?

Wilson: Yeah. There were a couple of things that we needed out of our lenses. One, they had to have the sensor coverage for our camera. Two, because the puppets are slightly smaller than humans, we were going to be in to close focus a lot and we needed lenses with a [close] minimum focus. We did some different tests and the Cookes seemed to fit all our criteria. That seems to be how I quite often pick lenses. There will be three or four things that I need from the lenses for that particular production. For The Dark Crystal we wanted to use a large sensor Red camera and wanted to shoot on anamorphic. That left us with maybe two or three sets of lenses to choose from, and the Cookes looked the best.

Filmmaker: Which of the Reds did you use?

Wilson: Louis had done some tests with the Helium, Monstro and Dragon sensors. We thought the Dragon looked better than the Helium and Monstro, which are actually newer sensors. We asked Red if they could make us a square sensor, basically a 4K square—4K wide and 4K high. Then we stretched that out to our 2.1 ratio [after the anamorphic unsqueezing]. We did end up cropping slightly further to a 2.2:1 ratio.

Filmmaker: There’s an increasing number of movies and shows shooting 2:1, but Mindhunter is the only thing I remember going with 2.2:1. Why that specific ratio?

Wilson: We shot everything with the intended ratio of 2:1, but we ultimately cropped a little bit more top to bottom and went a little bit further on the sides just to get rid of a few more puppeteers’ heads. 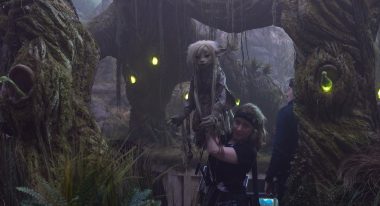 Filmmaker: The show’s two main creatures are the Gelflings and the Skeksis. What goes into puppetering and then shooting each of them?

For both types you have a puppeteer’s hand up in the head and then their other arm has a rod that controls [one of the creature’s] hands. Then there’s another puppeteer using a rod for the other hand. You also have one or two people back at a monitor controlling the eyes, the eyebrows, the ear movements, etc. by remote control. It’s a lovely dance between all of them.

The puppeteers also have to hit marks and eyelines. That was the biggest challenge. When I signed up for this I thought, “There will just be a table that everyone hides behind. They’ll hold the puppets up and we’ll film that with a locked off camera.” The puppeteers are operating off of monitors, so they only see what the camera sees. They have no perception of what’s around them, so it made it very difficult for them that we were always handheld or on Steadicam. Quite often the puppeteers would correct their positioning in an over the shoulder frame, and then you as the operator are also adjusting and you end up doing this dance where you’re drifting around together. If we would’ve just locked off the cameras the puppeteers could’ve seen a monitor and easily adjusted in the frame, but that would’ve been a lot less fun and a lot less kinetic show. 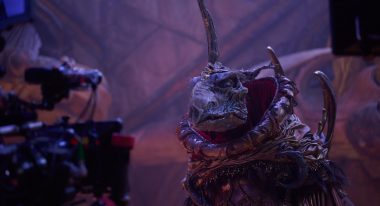 Filmmaker: Did you have to light the two creatures differently?

Wilson: We did some tests early on and realized you have to be a little bit gentler with the Gelflings and not have incredibly harsh light on them. Whereas with the Skeksis, you want that hard light to accentuate the wrinkles on their skin. One of the main things was to catch eyelights for them as much as we could. In a normal drama you don’t ever question if the actor is alive (laughs), so I wouldn’t normally use as many eyelights, but with the puppets the eyelights really helped [selling] this notion of them being alive. 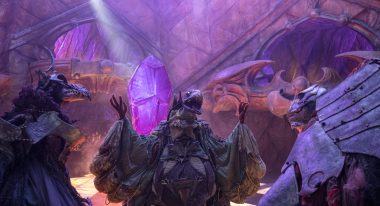 Filmmaker: The show takes place on a planet with three suns. How do you account for that when lighting?

Wilson: I have to give credit to my gaffer Andy Lowe. For a normal movie you’d go “Alright, it’s morning, it’s winter, so the sun is a bit lower and it’s in this direction.” It was Andy who was like, “Wait, does anyone know what sort of path these three suns take?” Everyone was like “Uh, no.” So Andy had to figure out how the suns moved, so that when we came to light the sets we’d know where the suns would be at that point in the day.

We did use the idea of the three suns to be a little bit bolder with color. We didn’t have to be super naturalistic in terms of the color temperature of everything. We could push it just to the edge of where it gets a little bit silly. We took much of that from the original film, where you go “That’s a lot of purple,” which I find to be a slightly odd color to use in general, but I had to come to terms with that.

Wilson: It was 180 shoot days. Actually I was initially only going to do the first three or four episodes and Louis was going to do the first three or four too. But early on in prep he said, “I think I want to do all of it,” and I said, “Sure, I’ll join you for that.” It was very, very hard. Normally if you do ten episodes of anything you have a few blocks of shooting and you take a couple of weeks in between blocks for prep. On one of our breaks between blocks on The Dark Crystal we went and did plate shots for a week and then went right back to shooting [main unit]. So there wasn’t really any time off at all. 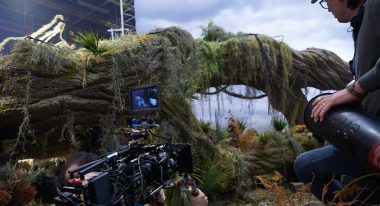 Filmmaker: How were your stages set up?

Wilson: We had two stages. There was a wonderful plan straight away where we’d shoot on one while they’d construct on the neighboring one. After about a week and a half things got muddled up and we ended up constructing and pre-lighting on the same stage that we were shooting on. There was construction, lighting, de-rigging all happening all around us the whole shoot. At least that’s what it felt like.