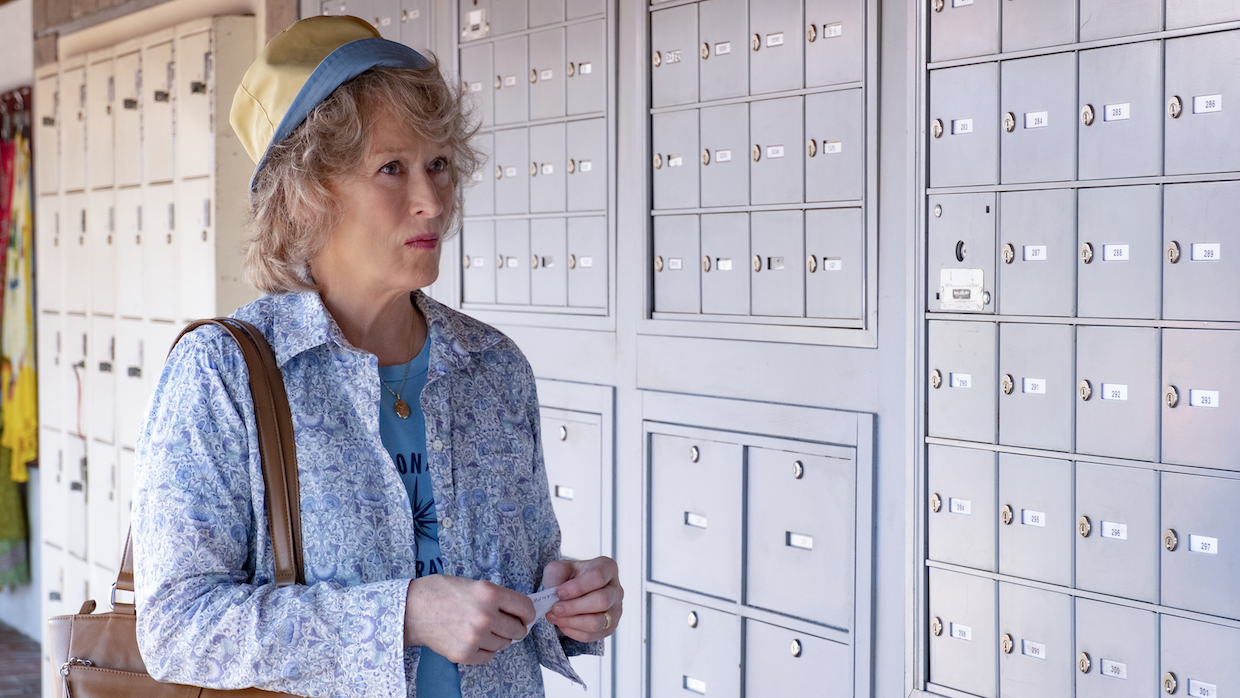 Meryl Streep in The Laundromat

Steven Soderbergh’s most persistently recurring subject is economic inequality, attacked from a number of angles: lone dispossessed protagonist vs. powerful corporation (Erin Brockovich), the ways in which minimum-wage employees are demeaned by employers (Bubble), capitalism as sex work against the backdrop of the last recession (The Girlfriend Experience), white collar crime (The Informant!), attacks on pharmaceutical companies (Side Effects) and private health insurance (Unsane), a general emphasis on stratification and the bottom rung of the ladder (Magic Mike and Logan Lucky, the proletarian Ocean’s Eleven, in which a heist doubles as praxis redistribution). Che speaks for itself, and this year there are two new additions. Working from one of the best-ever scripts he’s had, High Flying Bird took direct aim at the NBA. In visually centering the black players, Soderbergh does something unusual: he decentered whiteness onscreen, otherizing it rather than making it the default center of gravity and identification. White people are unseen for a long time, and when they’re spotted, it’s immediately clear they’re up to no good. It’s the strongest work of his post-“retirement” run thus far.

Soderbergh’s other Netflix movie this year, The Laundromat, turns out to be something of an anthology film, and thus by definition pretty uneven. The subject is off-shore shell accounts, specifically those administered by the firm Mossack Fonseca, as revealed in the 2015 leak of the Panama Papers. I despise The Big Short for all kinds of reasons but give Adam McKay grudging credit for not simplifying the mind-numbing particulars behind credit-default swaps and the other previously obscure financial instruments inadvertently designed to destroy the economy in new and breathtakingly cynical ways. The Laundromat does a decent basic outline of how shell companies operate and the niceties of tax evasion but doesn’t go in too deep—you get the general idea. The intent, I suspect, is rhetorical efficaciousness: this is a movie that ends with a direct-to-camera call for meaningful campaign finance reform now, before the next election, so perhaps it was thought best not to get too bogged down in the weeds.

It begins unpromisingly, with prefatory opening remarks from Mossack (Gary Oldman, deploying an unforgivable German accent) and Fonseca (Antonio Banderas) themselves, delivered to a steadily moving-backwards camera through a landscape that, at one point, pauses for an ill-advised homage to 2001‘s “Dawn of Man” sequence. The tone is one of unmissable, heavy-handed irony, the two sleazy financiers disowning responsibility with scrupulous emphasis on the legality of their actions. The first real chapter tracks Ellen Martin (Meryl Streep), whose husband dies alongside many others when a boat turns over. Trying to get the insurance company to pay up opens up the scope of inquiry: the boating company themselves aren’t properly insured, their presumable coverage leading only to a series of shell companies and a complete inability to find someone who’ll actually pay. Other segments expand the geographic scope of the investigation: the film’s best chapter concerns an African investor who gives his would-be idealist daughter a bracingly direct lesson in how enough money can easily buy off anybody’s ethics, hers included. Another, less successful, revisits the noir-ish terrain of Side Effects but in China, widening up the aspect ratio from 1.85 to widescreen with lots of anamorphic lenses just for the occasion.

Its one stellar chapter standing a cut above, the rest of The Laundromat is basically fine: intelligently shot and edited as usual, kind of funny (though not as funny as Wolf of Wall Street, which still absolutely owns the post-recession economic genre) and self-reflexive (at one point Mossack and Fonseca tell us that both the director and screenwriter of this movie have their own registered addresses for shell companies in Maryland). It’s essential for Soderbergh completists, less so for everyone else. I’m interested in the fact that the movie is intended, unambiguously, to effectuate political awareness and change. (Spoilers follow) That final direct-to-camera address is delivered by Streep who, it turns out, has pulled a Tilda Swinton and gone through the entire movie in a second, heavily prosthetic part—when she delivers her final speech, she literally steps into the garb of the Statue of Liberty. Soderbergh has never been so direct about his real-world aims, generally mediating his attacks through one genre or another while stopping short of explicit polemic. It is interesting to me that he feels strongly enough about the urgency of the message to finally step it up to this extent, and am gloomily unclear to what extent, if any, that will prove effective.