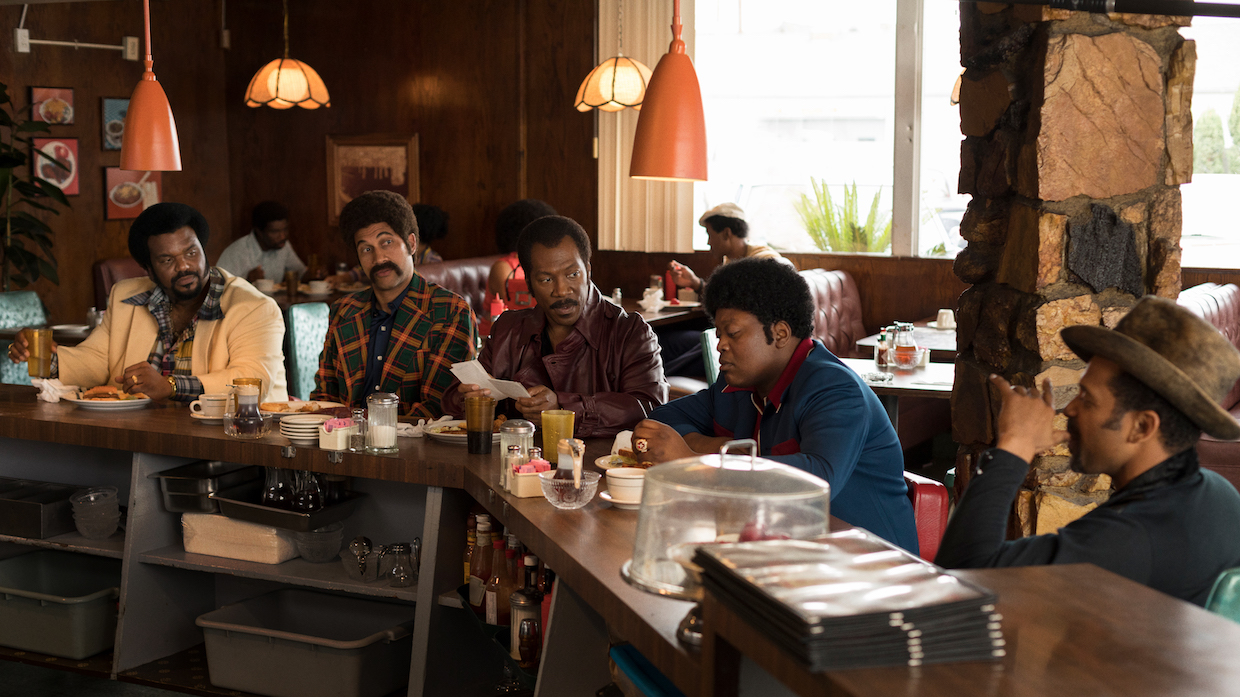 Dolemite Is My Name

Eddie Murphy was all of 21 when he started shooting 48 Hrs. There were no years of supporting player quips to work himself up the ladder—instead, he landed the lead in an excellent, commercially successful movie first time out. He wasn’t the kind of comic who needed a movie to be built around his limitations, but an instantly seasoned player with serious dramatic chops. There’s a moment in Coming to America where the subway doors slam shut on him registering surprise and disappointment, and Murphy nails the look without overplaying—I think at that point in his career he was capable of anything. But instead of following the lead of Peter Sellers (another comedian who was also an outstanding technical and dramatic performer) in that direction, Murphy pursued another part of his legacy: costumes and disguises. Instead of Dr. Strangelove, the emphasis on prosthetics lead from America‘s quadruple-part to Vampire in Brooklyn, Nutty Professor II: The Klumps and Norbit.

Murphy was a success young and burned himself out early on grotesquerie and anodyne family fare—the opposite of Rudy Ray Moore, the subject of Murphy’s comeback biopic Dolemite is My Name. Moore was a no-reputation performer in his mid-40s when he came up with the character of Dolemite, a pimp and rhyming raconteur. The screenplay is by biopic specialists Scott Alexander and Larry Karaszewski, who’ve written almost nothing but—good-natured and cheery in its portrait of a band of unschooled filmmakers coming together to make an unlikely eventually triumphant pop culture object, Dolemite is a revisitation of their Ed Wood. There’s a crucial difference: Wood rolls with a totally fictitious ending in which Plan 9 From Outer Space‘s completion goes well, a sweet intervention into actual history. Dolemite is, it seems, basically pretty accurate, the story of a self-financed striver made good (Dolemite cleaned up $12 million in 1975, which should place it somewhere in the year’s top 25 releases).

An absurdly stacked cast backs Murphy (MVP: an extremely funny Wesley Snipes), the story racing through the creation and initial rise of Dolemite as character to an extended focus on the making of his first movie. I’m assuming the storyline is taken from direct interviews with the subjects, since there’s no book on Moore and seemingly little in the way of comprehensive biography online. If Moore isn’t a total obscurity, it still seems like he deserves as much documentation as, say, Ed Wood or Tommy Wiseau, who got an entire book (and movie!) out of the making of The Room—to that extent, this movie actually provides a public, implicitly polemical canon expansion service. Murphy’s about a decade younger than the man he’s playing but doesn’t look it; the ever-trim star bulks up to simulate Moore’s gut, a plausible excuse to indulge his prosthetics penchant. (To an unavoidable extent, this tribute from one comic legend to another is inevitably a meta-text about its star, ending with Dolemite throwing down with a young boy—a flashback to Murphy’s family movie years.) But the performer carries older cultural baggage that’s sure to be relitigated during this comeback run (Raw, for starters), and obviously so does a character to whom the words “pimps and whores” came easily. For all I know the script has been sitting around for years, but there are two moments that definitely mark it as a movie made recently. One is a reference to that nice, clean-cut young man Bill Cosby, metatextually and definitively settling a long-running feud between him and Murphy. The other comes at the end, when Dolemite’s co-star Lady Reed (Da’Vine Joy Randolph) tearfully thanks him for casting her in the lead, because she’s never seen anyone “who looks like me…a real woman” onscreen before. She felt seen, as we currently say, and it’s a little hard to believe someone would express themselves that way in 1975—in any case, the moment feels like pre-emptive defense to justify a man whose entire comic project was textbook 2019 #problematic. I suspect a lot more best-offense-is-strong-defense biopics will be coming soon.

The movie is lightly likable, more dedicated biopic than comedy per se—Murphy colors precisely within the lines of his character, and executing the story, rather than unfettered comic invention, is the primary goal. If everyone onscreen wasn’t enjoying each others’ company, they did an excellent job of simulating it, and the script avoids the usual pitfalls of this genre—e.g., it doesn’t invent a fictitious girlfriend or wife for the sole purpose of nagging at Moore when his goals seems unrealistic. There is a tiny, regrettable suggestion of a backstory for Moore to “overcome,” versus a faint, basically harmless emphasis on his hatred for his dad and self-loathing over his country upbringing. That’s nothing by recent genre standards: Rocketman ends with Elton John literally hugging his inner child. Murphy’s comeback trail is going to extend to Netflix specials, a Coming to America sequel (also to be made by Dolemite director Craig Brewer)—whether he’s about to become the new Dave Chappelle, in a bad way, remains to be seen, but this is a pleasant enough return to the public eye in the meantime.