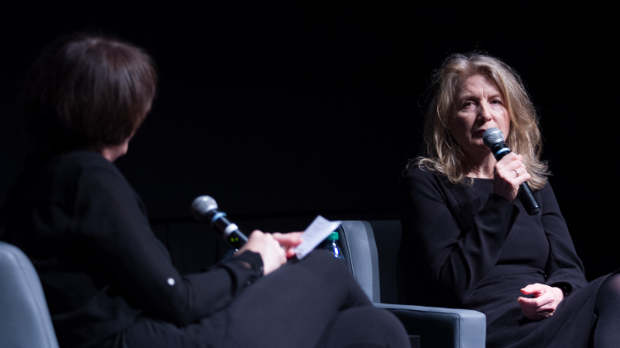 by Allan Tong
in Directing, Festivals & Events, Filmmaking
on Mar 12, 2013

Sally Potter spoke to a sold-out, mostly female audience on a springlike afternoon in Toronto. She was the latest world-renowned director to sit in the interview at the TIFF Bell Lightbox, and she discussed with journalist Johanna Schneller her experiences and views on filmmaking while clips of her films burst on the screen including her latest, Ginger & Rosa.

The session started with a moment from her little-seen 1979 short, Thriller. It’s an experimental short consisting of grainy black-and-white photos married to the opera La Boheme and Bernard Hermann’s theme from Psycho. “The decisions I made were about trying to bring elements together that seemed disparate in the culture,” the 63-year-old Potter explained. “When I made it in my late twenties, it was synthesizing passion which found a very abstract form, and I was totally under the illusion that it would be completely popular.”

After Thriller received acclaim on the international festival circuit, Potter was excited when 20th Century-Fox called her for a meeting. “This is it!” Potter exclaimed to her mum. “My life is going to change.”

Instead, 30 seconds into the screening Fox executives began sinking in their chairs and throwing each other glances that screamed, “What are we doing here?” Needless to say, Potter never heard from the suits again, but the encounter served “as a wake-up call about the sharp difference between what I enjoyed in making…and how it might be received. That gap was a chasm.”

Potter wanted to bridge that gap, but fell short with her first feature, The Golddiggers, released in 1983 and starring Julie Christie. Boldly, Potter hired only women on her crew “to break through the closed shops in the unions at the time.” The decision flew in the face of Orson Welles’ dictum for a director to surround herself with the best technicians. Most of her crewmembers had no film experience, yet she paid them all equally. Unfortunately, this egalitarian approach clashed with the reality of filmmaking when halfway through shooting the crew mutinied “because it was suppressive to work under a director, [which] they discovered halfway through the shoot.” Her “Marxist-feminist musical anti-narrative with a film star at the core” was lost on audiences when it was released. Potter recalls with a laugh people spitting at her after screenings. “I was a pariah,” she deadpanned.

It was another nine years before Potter had her cinematic return with Orlando, based on Virginia Woolf’s gender-bending novel. For the all-important title role, Potter cast Tilda Swinton, an actress who generated a “feeling of rightness in every way” and allowed Potter to “project thoughts on her face” to act as Potter’s mouthpiece.

Orlando became an arthouse hit for Potter, and it remains her signature film. The swing from outcast to critical darling was dizzying, she recalled. “It was weird to suddenly be pursued.” However, as flowers and scripts poured into her hotel room that year, she felt vindicated “to move out of the margins and connect with an audience.” 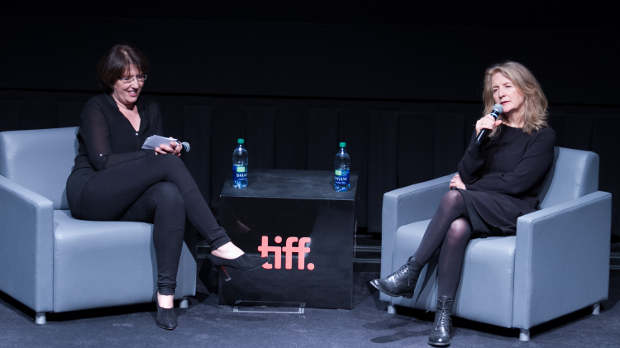 After the acclaim over Orlando, Potter surprised many by following with 1997’s The Tango Lesson: “I was really enamoured with that tango form. I had been doing it as a hobby on the side while doing Orlando. [I thought,] ‘I’ll just make a little teeny-weenie documentary about it.’ ” Instead, the project grew until Potter found herself standing in front of her own camera playing a fictitious character. “It’s a little weird to put yourself in a film,” she confessed with a smile. “It’s about the metaphysics of filmmaking…what you’re making is in fact what you’re living [and] what you’re living is what you’re making.” She admits that The Tango Lesson divided audiences and attracted hurtful charges about narcissm. “This was serious, this exploration, and I was sad when when my appearance was criticized. That’s low.”

2004’s Yes was another departure, given that the dialogue was written in iambic pentameter, the same poetic form that Shakespeare wrote in. “The rule in movies is show, don’t tell,” explained Potter. “I thought, ‘Fuck it.’ ” Potter explains that she wanted to capture the musicality of human speech and the “natural flow in our heads” that poetic rhythms could capture instead of convention screenplay dialogue.

That makes her current release, Ginger & Rosa, another departure. It’s a conventional three-act drama about two teenage girls coming of age in 1962 England. The movie is about friendship enduring under the pressure of personal crises and the threat of nuclear annihilation, which Potter likened to today’s threat of global warming. Potter refused to break the third wall as she’s done on her previous films, and instead put the focus on her young actors. “I wanted to break away from my own identity — chuck my own identity away as a filmmaker.”

Potter has never made films the easy way. To her credit she consistently challenges herself and risks failure. What sustains her, she said, is her love of filmmaking. “I am overjoyed when I’m working, even when I’m in despair. I accept the despair, the doubt and the sleeplessness. It’s part of the price that one pays. I love working.”