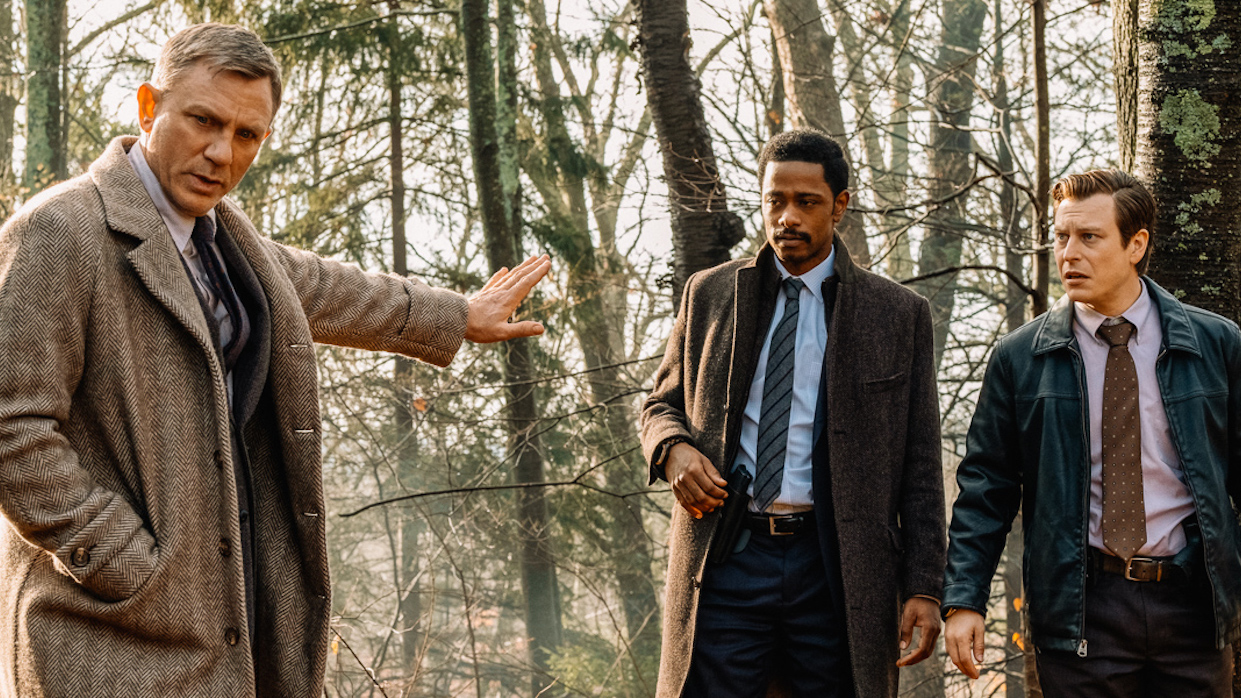 Daniel Craig, Lakeith Stanfield and Noah Segan in Knives Out

A passion project Rian Johnson has been mentioning since at least 2010, Knives Out will presumably be a cornerstone of some future retrospective on movies made after fulfilling the imperative to successfully execute a blockbuster, alongside Ridley Scott’s The Counselor and Colin Trevorrow’s The Book of Henry. In 2010, Johnson pegged it as “an old fashioned murder mystery, like an Agatha Christie,” and I’d be curious to read the earliest draft to compare/contrast with the final product — the world has worsened considerably since, and the present is unavoidably imprinted. This begins as a locked-room mystery, concerning the suicide (or is it murder, etc. etc.) of crime-novel master Harlan Thrombey (Christopher Plummer), his death probably at the hands of one of his predictably venal family members. So far that’s very Christie indeed, but Johnson makes a crucial early decision that short-circuits her usual structure — a long flashback makes it clear that one of the obvious suspects is so far from being guilty that the mystery’s primary dilemma isn’t figuring out who did it, but how the fallout will be managed.

I’m keeping it vague, but suspense/twists do not proceed from red herrings and the elimination of suspects to a final reveal. Instead, Johnson uses a reverse-Poirot structure: the master detective here is the heavily Southern-accented Benoit Blanc (Daniel Craig), who shares the Christie template’s carefully cultivated eccentricities and flamboyance. Unlike Poirot — who, generally, enters Christie’s novels after 90ish pages of scene-setting buildup and then takes center stage — Blanc never assumes POV dominance, doing his work at the narrative’s sides while the suspects dominate. In another structural inversion, the family party which preceded Thrombey’s death is reconstructed from multiple testimonies not as a final drawing-room monologue unveiling the killer (although there’s one of those) but near the beginning. Up to now a 35mm loyalist, Johnson goes hyper-digital, staging a fairly snappy comedy (I’d peg the joke hit-to-miss ratio at about 70/30, which is good). It’s easily his best since the still impressively idiosyncratic Brick; for me, each subsequent follow-up was marred to varying extents by both weirdly unpleasant moments of super-turned-up angst/hysteria and (Episode VIII obviously excepted) a final twist ending that undermines what came before rather than recoding it. Here, Johnson keeps things light over a fleet 130 minutes and sticks the landing. Weirdly, while I enjoyed the mystery, I liked the political elements more: this is less about parsing clues than a study in the unintended consequences of well-meaning but myopic liberalism in clunky action. Thrombey’s large, fractious family is polarized, and the ping-pong taunting back-and-forth exchanges of “SJW”/”alt-right troll” in the background convey the immediacy of a political climate operating in comments-section soundbites. I suspect I’m slightly undervaluing this — the structure may be didactic, but the immediacy of its references is unforced, which is rare.

I’ve seen all but the first of Federico Veiroj’s five features. Though they’re not all on the same frequency, they share a modest obduracy I admire: A Useful Life, regarding the (fictional) closing of the (still-running) Cinemateca Uruguaya, is his most overtly droll film, somewhere in the neighborhood of a less-pessimistic Kaurismäki. The Apostate‘s target is clear (how mindnumbingly hard the Catholic Church makes it to officially leave, and how that overlaps with Spanish political corruption), but its methods are more obscure; Belmonte‘s portrait of a single father as failing painter is most succinctly described as a nicer version of Martin Scorsese’s devastating “Life Lessons” segment in New York Stories. Throughout, there’s a desire to withhold that’s not like the straight-up dismantlings of/challenges to narrative or general clarity a Pedro Costa might present — a story is being told, mostly clearly, but the emotions bubbling under, and what’s desired from viewers, remain enigmatic.

As Veiroj’s first period film, it was reasonable to wonder whether The Moneychanger would give audiences slightly more to work with as a trade-off for the additional financing necessary for period-appropriate cars, wigs et al. Not really: tracking one Humberto Brause (Daniel Handler) from 1955 to the late ’70s, this certainly has some set dressing frills but, cost-effectively, mostly stays indoors. Brause narrates, condemning himself in unambiguous terms from the beginning: Jesus knew exactly what he was doing when he cleared the temple out, people like himself are the root of evil. Brause’s specialty is money laundering, of the type involving regular courier trips to smuggle currency to Switzerland, and his rise makes him a kind of ghastly Zelig of Latin American political instability. The opening voiceover establishes that Uruguay is a small country “between two giants”; amusingly, the English subtitles assume (probably correctly) geographical illiteracy among English-speaking viewers, noting in brackets that those would be Brazil and Argentina. Brause goes both places, climbing his way up the political ladder, his early stint in jail only serving to assure the perpetual Uruguayan ruling class of his fitness and loyalty.

Brause’s character is retrospectively self-aware in telling his story, but a blank shell to the world while living it, a binary torn between uncomplicated lust for money and a love for religious classical music that does not actually wash away his sins—as with The Apostate, Veiroj is linking political transgression and religious hypocrisy but doesn’t bother to over-state the case. The narrative presents a clear-cut study of two decades of political instability and the role economic dishonesty inevitably plays; the anger is clear, solutions non-existent (as they are). It’s the opposite of The Laundromat‘s clarion closing call for direct action, and this lack of viable modes of redress seems honest; the best we can do, it seems, is pull together international co-productions so that viewers all on the same ideological page can confirm that everything always has been, and will continue to be, garbage. None of this conveys the peculiar temperature of The Moneychanger, which is low-key funny but the opposite of Wolf of Wall Street in making the business of corruption look like zero fun, just constant coffee-drinking, procedural intricacies and one-on-one meetings. If you’ve ever known a smart, ethical person who buried their conscience because they concluded the cash to be made in law or finance trumped what they know goes into getting it, there’s a familiar form of depression that comes with that decision — that, perhaps most clearly, is what Moneychanger conveys.