Frightening with Cosmic Consequences: Justin Benson and Aaron Moorhead on their TIFF-Premiering Synchronic 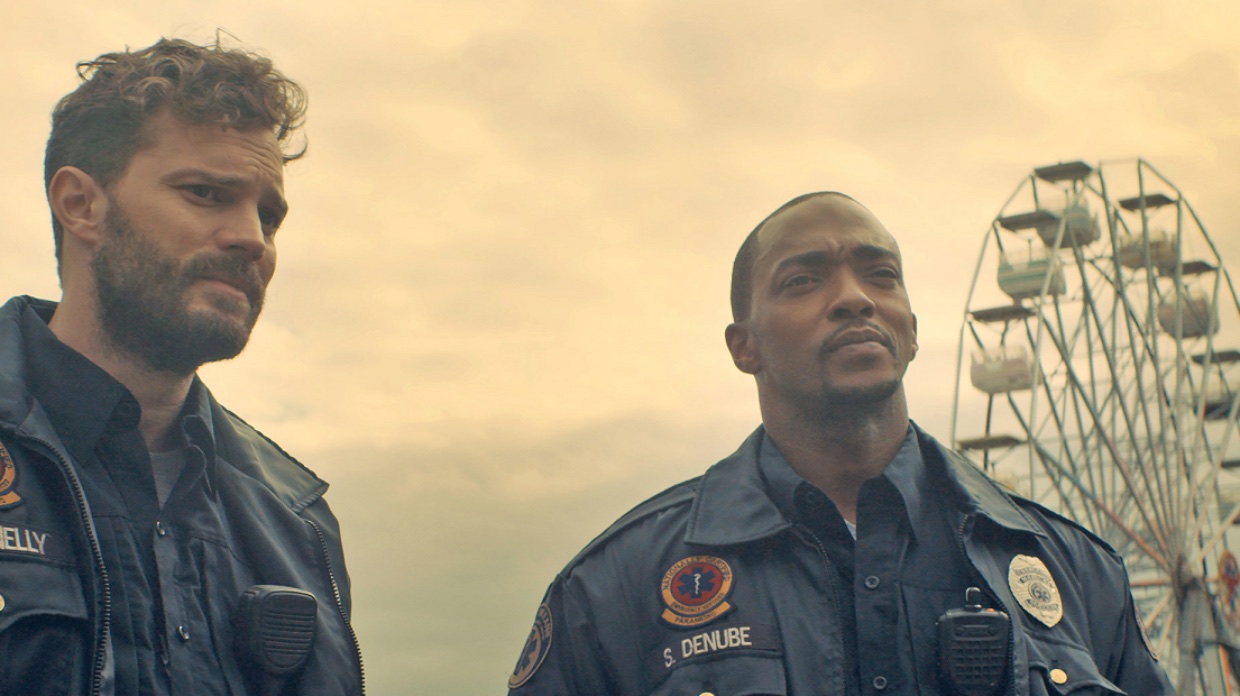 Working for the past several years as a directing tandem, filmmakers Justin Benson and Aaron Moorhead return to the Toronto International Film Festival with Synchronic, a film described by TIFF programmer Michael Lerman as “both suspenseful and subversive.” Following two paramedics based in New Orleans as they uncover a series of odd, drug-related deaths, Synchronic represents the next step forward for the two genre-filmmakers. Complete with two franchise-leading stars (Anthony Mackie of Avengers fame and Jamie Dornan of Fifty Shades of Grey), the film marks the directing duo’s return to TIFF after a five-year hiatus (when their gory foreign romance, Spring, played the festival in 2014) as well as a coming-out party of sorts for editor Michael Felker, who began as a production assistant on Benson and Moorhead’s first film.

As evidenced in their answers below, the film is neither a “drug movie” nor a story without secrets. Citing influences as wide-ranging as 2001: A Space Odyssey and True Detective, Benson and Moorhead were out to make a terrifying experience that comes complete with cosmic consequences. Here’s hoping the consequences pertaining to the pubic reaction of the film are less dire. Billed as a Special Presentation, Sychnronic had its world premiere on Saturday, September 7th at the Toronto International Film Festival.

Filmmaker: Were you channeling any specific stylistically-driven “drug movies” when embarking on this project?

Benson: We don’t view Synchronic as a “drug movie” like Fear and Loathing in Las Vegas or Requiem for a Dream or anything in that tradition. It also intentionally doesn’t take any moral or ethical standpoint on drug use at all, but hopefully does present some really interesting ideas about synthetic analogs that are sold over the counter in the U.S. And Synchronic (the pill) doesn’t replicate any psychedelic effects from any actual drug, but rather, it’s a mechanism for a terrifying sci-fi premise. So, stylistically, we were aiming for the movies that frighten us with cosmic consequences, like 2001: A Space Odyssey, Annihilation, and True Detective. That said, we have a very instinct-driven style that we respond to the most closely, which can be seen in our previous films, like The Endless.

Filmmaker: What role do you view the city of New Orleans as having in the film?

Moorhead: New Orleans is the beating heart of Synchronic. It was written for the place, and there was never a possibility of changing it. It’s one of the only cities in America that shares very little with any other US city: its eclectic history of French and Spanish colonialism, war, cultural and economic and racial division and cohesion, music, food, architecture…if it were a painting, it’d be three inches thick with layers and layers of different strokes and colors, sand and stucco and blood mixed with the paint. Within the United States, culturally it might be better described as its own country rather than just another city. If we had a few more days to shoot, a longer runtime, and no concern about pacing, we’d just be cutting in B-Roll of all of its unbelievable nooks and crannies. We wanted to make the movie as “Nawlins” as New Orleans could get.

Filmmaker: You both edit your films together, along with a third hand, Michael Felker. How does having an additional pair of eyes in the editing suite benefit the work and enhance the story you’re attempting to tell?

Benson: We edit in our heads as we shoot, which lets us do less coverage and move faster, more nimbly. We find that if we don’t get our hands dirty in the edit, there’s something missing, and we won’t know what till we dive into the raw footage ourselves. But we have a far more skilled editor than ourselves in Michael Felker, who often finds meaning in moments and scenes that we can’t predict. It’s been beautiful to watch him go from being a production assistant on our first set to being a world-class editor that we’re lucky puts his brainpower and seemingly unlimited energy towards our films. Michael Felker is a genius.

Filmmaker: Having worked together on several features, what have been the keys to sustaining your directorial partnership?

Moorhead: Preparation is the key. We talk out everything down to the minutiae, the boring bits that everyone would assume you already know, just to make absolutely sure we’re on the same page. It helps get ahead of problems not just in your interpersonal workflow, but in your departmental workflow once you start hiring your key crew members. So we talk, and rehearse, and have meetings and make documents and charts and sketches of every little thing we can think of so that when the camera’s rolling, everything that happens is just jazz because you’ve already imagined the process side of it a million times. It’s usually at least a couple of years from the moment the idea is conceived until the big camera is up and we’re shooting it, and most of the movie is completed in camera phone pre-vis, Google docs and rehearsals before that happens. We basically make our movies in pre-production, then go shoot them with the fancy camera and the crew in principle photography. There’s always at least one take that’s magic and better than anything you rehearsed, but also something you would have never gotten without years of thinking it through and as much rehearsal as possible.