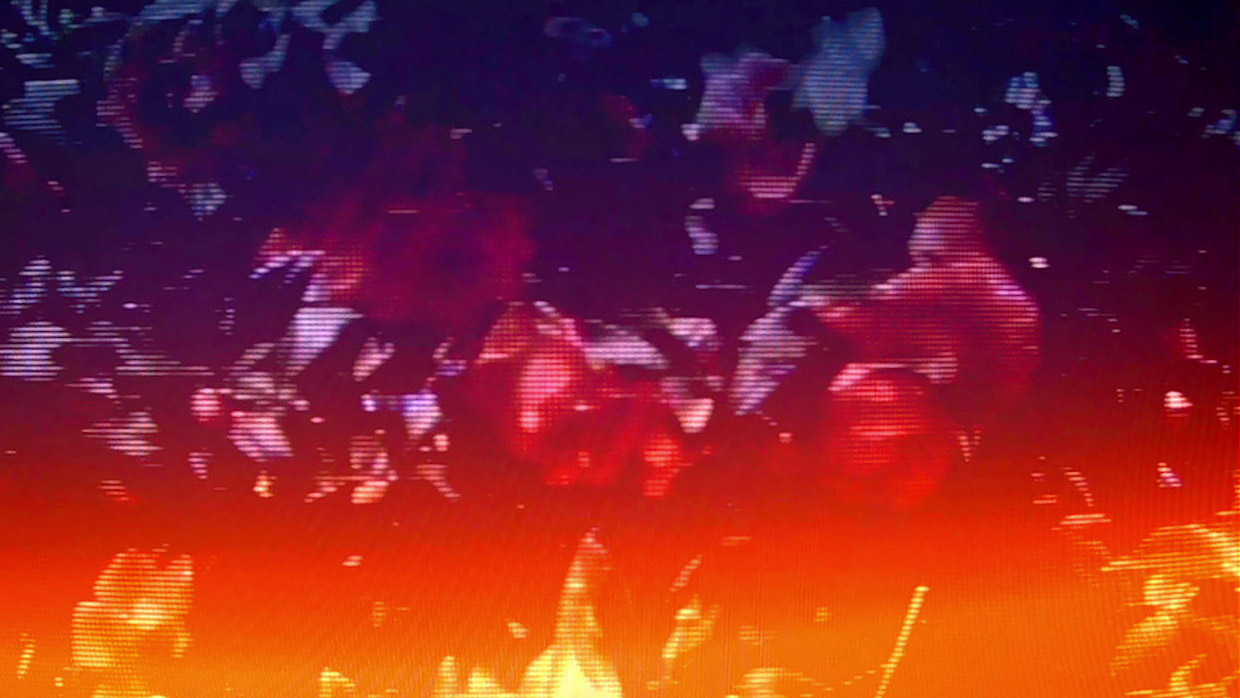 Following on the eccentric construction of the first program, where the coherence of a quartet of formally disparate films was established by a shared interest in alternative means of image production (gender, as The Bite reminds us, being one of these as well), the second slate of Wavelengths shorts traced a much clearer arc, as all six works offered variations on the home movie. Though I found it lesser in quality than the night before, Picard’s curation here was brash and confrontational in a way it rarely is, a charmingly punk gesture to make in primetime on the festival’s first Saturday.

The evening began with its highpoint, Blake Williams’ 2008, which proves him to be a remarkable colorist, a facet which had at times felt as if it were an afterthought in his previous videos. Working once again in polarized 3D, he has overcome both the medium’s and his own method’s drawbacks in terms of color range—as in his previous work, the feature-length Prototype, much of 2008 has been rephotographed off of analog television sets—through not only his choice of palette, which is quite hot, but also by allowing the monitor’s refresh bars to serve as a low end of cycling darkness against which his blues, greens, oranges and pinks can optimally pop.

An opening view of water seen through a window is revealed, as the camera pulls back and separates the eyes, to be a view of water through a pair of windows, situated on perpendicular walls. This play of sympathy and division, in which the site of union modulates from frame to flow, sets the stage for the cybernetic romance which follows. Making use of the full range of frame rates available via the GoPro cameras he often uses, Williams pushes his rephotography in and out of phase, drawing all manner of startling beauty out of the CRT monitor’s electron storm. Dorskyite shots of flora, particularly a series of cherry blossoms (still images activated by the monitor as if it were a light breeze), mingle with passages of color calling to mind an array of approaches, from Jordan Belson’s interstellar psychedelia to Loie Hollowell’s intensely physical abstractions. Hollowell’s canvases, with their copulating forms, resonate particularly with the passage I take to be the heart of Williams’ video, a sequence set to Gloria Ann Taylor’s “Blue Glass Bubbles,” in which an abstract figure composed of two distinct but inextricable halves emerges from a searing orange-red moiré pattern, itself ensconced within a rainbow of cycling colors. It is an image of overwhelming intimacy and exuberance, capable of burning the eyes in more than one way. In what follows, we see both Williams’ partner, cutting a dashing figure as he takes in the desert, and what I am nearly certain is a rose bush atop a fence, shot from such an angle as to set Ella Fitzgerald singing “All My Life” on the soundtrack in the mind of anyone so inclined. Perhaps you will find it foolish of me to risk imposing such sentiment—romance long being one of the bête noire of the avant-garde and their successors—but what is love if not the most exquisite and expansive feedback?

In its absence of overt formal intervention within the image itself, Tomonari Nishikawa’s Amusement Ride departs markedly from his previous films, which have reliably worked to expand the possibilities available for constructing a single frame. Its title is literal: over the course of a dozen shots, each lasting the 30 seconds afforded by a fully cranked Bolex, Nishikawa trains his camera, equipped with a long lens, on the inner structure of Yokohama’s massive Cosmo Clock 21 Ferris wheel. Though glimpses of Cosmo World and the city beyond peek through, the cluttered foregrounds of these compositions are a riot of lines and planes drawn in steel, recalling nothing so much as Frank Stella’s sculptures of the last three decades at their most austere, dismantled into near-graphic flatness by the telephoto lens. As the film describes a full revolution, beginning and ending in the vermillion surface of, I assume, the carriage nearest to the one Nishikawa is shooting from, he maintains a steady sense of rising by turning his Bolex on its head for the seventh through twelfth takes. Moreover, within each shot, he tilts his camera in sync with the ride’s rotation to create a gently disorienting core of stasis within the film’s steady movement, an effect most spectacularly deployed in Steve McQueen’s Static. Nishikawa’s rhyming of the mechanics of both camera and projector is as pleasing as it is obvious, but it’s the sense of floating weightlessly in the midst of a grand machine which finally catches the cosmic on the wing, with an irresistible modesty.

Maureen Fazendeiro’s Black Sun is this year’s eclipse film, a micro-genre within the field of avant-garde and artists cinema which in recent times has reached, I hope, its saturation point. Following an opening passage of lushly tinted found footage of the roiling natural world—bafflingly thick fog, crashing waterfalls, spewing lava—the film shifts into monochrome and we see a full minute of figures taking in an eclipse through a viewing device, an image of looking which is itself of meager visual interest. Remaining in monochrome, Fazendeiro proceeds through further views of looking and reflection—there is first the film’s soundman and then a large crowd of people, all donning protective glasses and gazing upward, as well as the sun rippling in a pond’s surface and casting shadows out of the crowd. This is all photographed in stately shades of grey by Nicolas Rey and Pedro Pinho, and soundtracked by Delphine Seyrig reading Henri Michaux’s prose poem, “Je vous écris d’un pays lointain,” a recording borrowed from French radio. Though the film’s atmosphere crackles, in attempting to deepen the generic mystery of the eclipse, its brief insertion of night into day, with Michaux’s report from a land where “sunlight arrives only at its proper hour” and the “dawn is grey,” Fazendeiro has achieved rather the opposite effect: she has made his strange, distant place seem rather literal.

The particularly confrontational programming choice I alluded to above came in the program’s fourth film, Burak Çevik’s half-hour A Topography of Memory, which matches panning surveillance footage of Istanbul to an audio recording of a mother, father, and son on their way to vote in the Turkish elections of June 7, 2015. The family’s conversations are resolutely banal, as, for example, the son chides his centrist mother for her incoherent arguments against the progressive Peoples’ Democratic Party. Seen on the 25-foot-wide screen of Theater 3 at TIFF’s Bell Lightbox, these lower-than-low resolution images were rendered as muddy, pixelated quilts, of the sort favored by late Godard. Though the quality of their light varies wildly based on the differences in their locations, the general movement is from dark to light, and indeed, the end credits confirm that this footage, sourced online, was all recorded at dawn of the day following the election, in which Erdoğan’s right-wing Justice and Development Party lost its parliamentary majority.

As Çevik sets pan after pan, for a time, the tension grows: surely one of these sweeps across nearly deserted streets and squares will land on something. I cannot say when precisely it became apparent to me that this was not going to be the case—that the video would drone on at the same sluggish pace until its conclusion—but as the tension dissipates, a void grows which Çevik makes no effort to fill. In the theater, I found this unmitigated tedium entirely unproductive, or perhaps worse. Given the knowledge that Erdoğan’s thuggish regime would consolidate its hold on power in a snap election just five months later and continue to drive the country toward authoritarian rule in the intervening years, the failure of anything of substance to emerge from this morning of at least minor triumph seemed to express nothing but abject despair. And yet, two days on, A Topography of Memory refuses to leave my mind: it may be an overly miserable experience, but it captures a purgatorial mood too typical of our times with a rare directness.

I found Roy Samaha’s Sun Rave rather too typical as well, though for reasons further from any potential interest. An associative collage in the inescapable style of Hito Steyerl (the kitschy animated sun which appears early on could have been lifted straight from one of her works, while its title might as well be for a sequel to her Factory of the Sun), the content of this video, commissioned by the Beirut Museum of Art, reads like a parody of the clichés glutting the international art world at the moment. An opening title card—the first of an overwhelming amount of onscreen text present for no reason other than to explain the sounds and images—informs us that “studies around growth rings in trees traced a correlation between peaks in solar disturbances and major political events,” setting the context within which Samaha spins his web of connections. At its empty center is the hastily sketched story of a couple living next door to the artist’s childhood home, whose fondness for listening to number stations on the radio drew the suspicion of their neighbors. The topics concatenated around this reminiscence include geopolitical history both recent (the Arab Spring) and of slightly older vintage (the Cold War), mysticism (not only the astrology-adjacent positioning of the sun as control mechanism, but also spiritism and theosophy, recently resurgent in the wake of Hilma af Klint’s canonization), antique furniture, rave nostalgia, the broader history of encrypted communication (i.e., beyond the number stations), shortwave radios and, in the broadest sense possible, Western imperialism. Though Samaha, who shows no particular facility with montage, includes the obligatory amount of loaded archival images—explosions with no context; protesters, perhaps dead, being dragged off; the Berlin Wall; Ceaușescu in an extended cameo, Hilary Clinton in a briefer one—the majority of the video is made up of blandly competent digital footage of modern-day Beirut, seen from its streets and the waters of the Mediterranean, largely serving as a background to the texts, when they are not simply being displayed over a black screen, which is just as often.

The evening concluded with Joshua Gen Solondz’s (tourism studies), the shredded no wave counterpart to Çevik’s long drone. Built largely at the level of the single frame, including 16mm extracts, digital images, and graphic animations, its title is as literal as Nishikawa’s: the film, finished on 35mm, includes material shot over the course of a decade across four continents. Solondz moves freely through these various textures, settling into brief rhythmic passages which, because he has left the sound attached to single frames, create their own convulsive soundtrack. He alternates furiously not only between the murky depths of his celluloid material, which has the damaged surfaces and burnished colors of Phil Solomon’s film work, and the bright flatness of the digital frames, but also between different orientations of the same frame, as when the image of a woman photographing a checkpoint in the Golan Heights is flipped violently along its vertical axis. Though its material is uniformly denotative—even the target-like graphic animations point back to Solondz’s own earlier work of hardcore flicker, the somewhat boneheaded Prisoner’s Cinema—the effect as a whole is closer to music than rhetoric, aimed as it is at catharsis. Or perhaps such an understanding is my only recourse in the face of an inability, for the moment, to trace a meaningful line from, choosing more or less at random, a go-kart track to an interior filled with a pair of metallic sculptures topped with conic hat-heads to sheet music for Bach’s “Two-Part Invention No. 8” to its final images, in full motion and pea-soup film grain, of a pair of bicyclists.