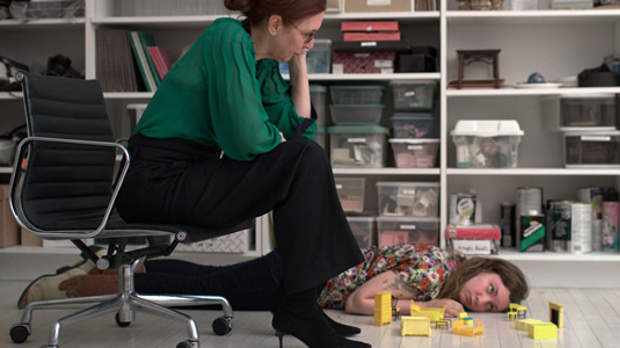 by Filmmaker Staff
in Uncategorized
on Nov 17, 2011

Originally published in the Summer 2010 issue.

Only a few months after we selected her for last year’s “25 New Faces” list, writer-director Lena Dunham went into production on her second feature Tiny Furniture. Shot by fellow 2009 “25 New Faces” Jody Lee Lipes and produced by Filmmaker contributing editor Alicia Van Couvering and Kyle Martin, the film wound up winning the Grand Prize at 2010’s SXSW Film Festival and was picked up by IFC for distribution this fall. The film was shot on the Canon 7D, and we asked Lipes, focus puller Joe Anderson and Technicolor colorist Sam Daley to comment on the DSLR format and their production and postproduction decision making. –S.M.

“Choosing to shoot on the Canon 7D was a bold move on [director] Lena [Dunham’s] and [d.p.] Jody [Lee Lipes’s] part,” says focus puller Joe Anderson. “At the time of production there were few (if any) rental houses in New York supporting the new hybrid-SLR cameras as movie cameras. Subsequently we had to make due with far fewer accessories than a traditional movie production would use. Existing tools like matte boxes, follow focus wheels and multiple monitors had not yet been updated to work smoothly with these new cameras.” The production rented a few different types of handheld and tripod mounts, most manufactured by Zacuto, from still-camera rental houses in New York City, and Anderson worked with Lipes to retrofit them for the shoot’s needs.

Technicolor agreed to convert test footage to HDCam SR so that everyone would know what they were getting into. Before the test screening, Anderson remembers Daley warning them, “You really shouldn’t shoot with this camera. It records in the h.264 format, which is more of a YouTube format; it’s not meant for production.” “But that was before we started shooting, and before he saw the final tests,” adds Lipes. “I think the color correct is really what sold him — when he saw how much flexibility he had with the color while we were in the final grade.”

Anderson recalls that first screening of test footage at Technicolor: “We primarily wanted to see how far we could push the camera in terms of light sensitivity [ISO] and how well the camera’s sensor would handle horizontal movement [rolling shutter],” says Anderson. “We were delighted to see that our 1080p test footage looked quite good projected from an HDSR tape on Technicolor’s 16’ x 7’ NEC 1S8 screen. We concluded that shooting at ISO 320 with a small reduction in contrast and sharpening in the camera’s picture profile resulted in an image we were happy with. When shooting night exteriors we found that pushing the ISO, while somewhat noisy, created an acceptable image. Our fears about horizontal movement however were realized. When panning left or right too quickly, the camera displayed the very distracting ‘Jell-O Effect,’ a result of the camera’s CMOS sensor not scanning quickly enough. With this unavoidable restriction in mind, however, Lipes and Dunham were able to create a shot list that avoided drastic horizontal movement.”

Daley comments, “Jody shot at 24fps and used many standard settings except that he activated highlight protection to help control clipping. The 7D was young at the time Tiny Furniture was shot so many of the camera’s optional settings had yet to be tested in the field. Jody used many default settings and the results were very good. The ISO settings were 200 ISO for exterior and interior days and 400 ISO for interior nights.” Lipes adds that “night exteriors ranged from 600 to 2000 ISO but mostly were at 1000.” Continues Daley, “I definitely recommend shooting with prime lenses (as was the case with Tiny Furniture); the sharpness and depth of field are the closest to 35mm film than I’ve seen on any HD format. But beware of moiré, not just in clothing but in hair as well.”

Technicolor’s preshoot camera test was also employed to troubleshoot editorial workflow. Adds Daley, “The Apple Pro Res codec worked very well. The image looked great and the file size was manageable for editorial. There was no need to return to the native h.264 files. The 10-bit Quicktime was important for color correction as it gave me the bit depth necessary to create windows and secondary isolations.”

3 Render a Pro Res Quicktime of the locked program.

7 From the color-corrected HDcam SR master, create HDcam cassettes for exhibition and a Quicktime for electronic distribution.

“Overall, I recommend a ‘save it for later’ approach,” he continues. “Capture as much image information as possible, protecting highlights and shadow areas via either lighting or camera settings. Be particularly careful not to clip highlights on faces, heads, and hair; you can’t get that detail back. With a simple gamma curve adjustment in your color correction system, you can get those images to a contrast level that is more rich and cinematic, and less flat and ‘video.’”