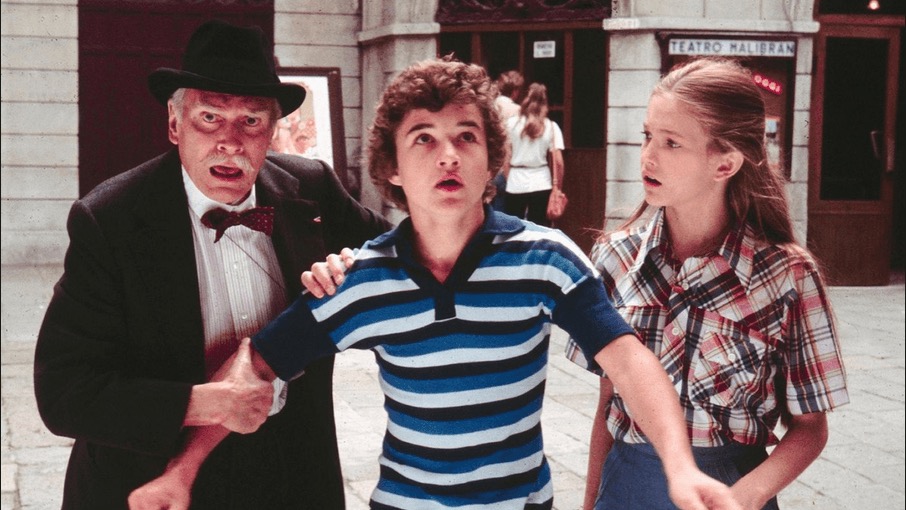 Director George Roy Hill (Butch Cassidy and the Sundance Kid, The Sting) has no shortage of mass appeal crowd pleasers on his resume, but I don’t think he ever made a more purely delightful or deeply moving film that 1979’s A Little Romance. A sort of prepubescent Before Sunrise, the movie follows two 13-year olds – French movie fanatic Daniel (Thelonious Bernard) and American bookworm Lauren (Diane Lane in her film debut) – who fall in love in Paris and try to make the most of their summer romance before Lauren is dragged back to the states. Perfectly calibrated on every level, from Allan Burns’ exquisitely structured and witty script to Georges Delerue’s lush and lyrical score, A Little Romance is the kind of straightforward, seemingly effortless entertainment that’s actually nearly impossible to pull off. Hill was at the height of his artistic powers when he directed the picture in between Slap Shot and The World According to Garp, and his confidence infuses every frame; he gives the movie a causal elegance in which nothing is forced and everything is earned, as the camera unerringly finds the perfect vantage point from which to showcase the young leads’ relaxed but potent chemistry. Bernard and Lane are fantastic both together and separately, and Laurence Olivier turns in a touching and funny supporting performance as an aging con man who facilitates the kids’ escape from the restrictions of the adult world. Smart but unpretentious, immaculately crafted and richly observant with insights that sneak up on you one after another, A Little Romance deserves to be ranked among the best films of its era, and the beautiful new Blu-ray from Warner Archive gives it the luminous presentation it deserves.

Also from Warner Archive and highly recommended is the gorgeous new Blu-ray of Robert Mulligan’s 1968 Western The Stalking Moon. Released amidst the ground breaking genre revisionism of Sergio Leone and Sam Peckinpah, The Stalking Moon was dismissed in its time by critics who thought it was square and old-fashioned, but now that Mulligan’s formal classicism is no longer the dominant style in American filmmaking it registers with a newfound vitality and appeal. The Stalking Moon reunites Mulligan with his To Kill a Mockingbird star Gregory Peck, excellent here as a cavalry scout who finds himself responsible for the safety of an escaped captive (Eva Marie Saint) and her half-Apache son. Peck spends the first half of The Stalking Moon trying to get rid of his traveling companions, but once he realizes the danger they’re in from the boy’s renegade father he takes them to his home, digs in with some fellow gunmen (including a young Robert Forster), and waits for the homicidal Apache to attack. Although it’s a completely different brand of movie from A Little Romance – grim suspense rather than effervescent romantic comedy – The Stalking Moon has the same kind of stripped down purity and ability to mine a simple premise for sophisticated emotional effects. Mulligan is one of the American cinema’s great masters at expressing point of view through composition and editing – just look at how he conveys children’s perspectives in Mockingbird and his final film, 1991’s The Man in the Moon – and The Stalking Moon is a clinic in building tension and developing character through the camera. It’s also a model of clear and concise screenwriting courtesy of Alvin Sargent, who would go on to write Paper Moon, Julia, and Ordinary People.

Over in the streaming world, the always reliable Criterion Channel currently features a selection of three indispensable films by director Allison Anders: her 1987 debut feature (codirected with Kurt Voss and Dean Lent) Border Radio, 1992’s Gas Food Lodging, and the truly remarkable Things Behind the Sun (2001). All three movies are essential viewing, but Things Behind the Sun is Anders’ masterpiece, a semi-autobiographical drama about rape that is as compassionate as it is angry and as healing as it is bruised and aggressive. The movie follows Sherry (Kim Dickens in one of the best performances of the century thus far), a singer-songwriter who was raped as a young girl and suffers from addiction as an adult. As her profile rises thanks to college radio, a rock journalist (Gabriel Mann, also great) who knew Sherry when they were kids and was witness to her rape reconnects with her for a story. To give away what happens between the two characters would be to rob Things Behind the Sun of its intense sense of discovery, so I’ll just say that Anders takes these characters—and the audience—to places completely unexpected, yet totally honest and almost unbearably affecting. The manner in which Anders’ film contains both rage and forgiveness without compromising either is a wonder to behold, and her study of the way in which music triggers our memories and can act as both a comfort and a curse is brilliant. She’s one of the best directors in the history of movies when it comes to depicting the influence and impact of music on the daily lives of her characters; now if only Criterion would get their hands on the long out of print Sugar Town…